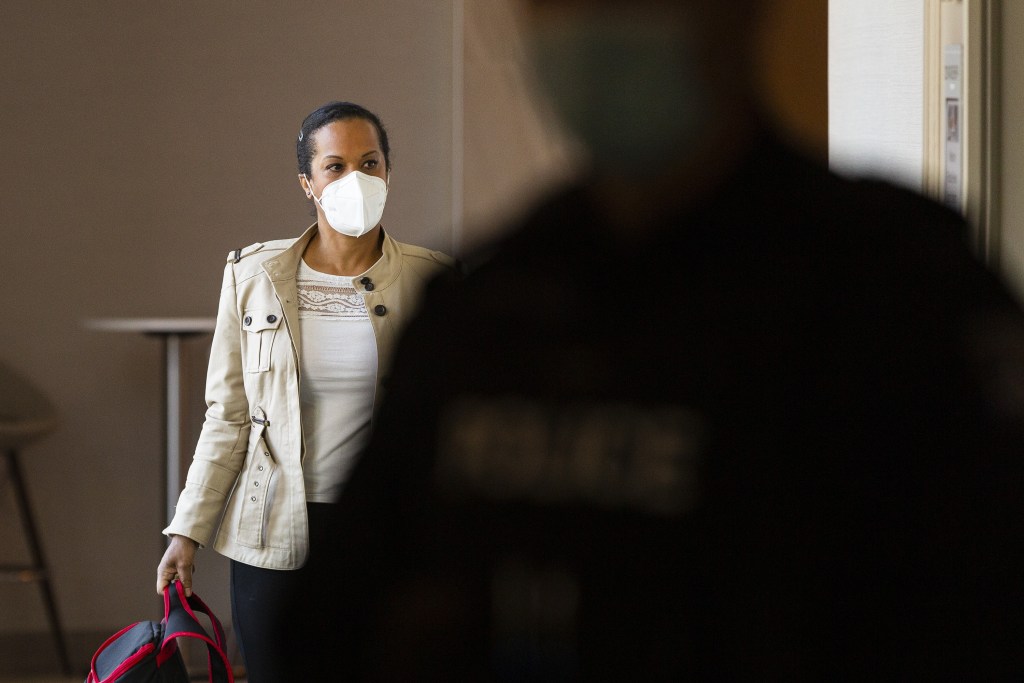 Const. Donna Lee Paris arrives at the hearing of the Police Review Board in Dartmouth on Monday. — Photo: Zane Woodford

The Halifax police officer who put the spit hood over Corey Rogers head said she was unaware they could be dangerous for prisoners.

Const. Donna Lee Paris is one of three officers facing a Police Review Board hearing in Dartmouth this week and next. Along with constables Justin Murphy and Ryan Morris, Paris carried Rogers into cells at Halifax Regional Police headquarters before he vomited into a spit hood and died.

Paris testified on Thursday after the board heard from Murphy and a few other HRP officers earlier in the week. Her story was essentially the same as Murphy’s: the three officers arrested Rogers outside the IWK, where the police had been called because he was drunk. They loaded him into Morris’ cruiser and Murphy and Paris got in their cruiser and drove to headquarters.

Once there, Paris testified she saw Rogers banging his head against the Plexiglas partition in Morris’ cruiser, and she could see mucus and tears on his face and on the inside of the vehicle.

“We’re gonna need a spit hood,” Paris testifies she said at the time.

Murphy went into the building to get one and brought it back out. Paris testified that she put the spit hood on Rogers’ head, and then they removed him from the vehicle and carried him into the building. 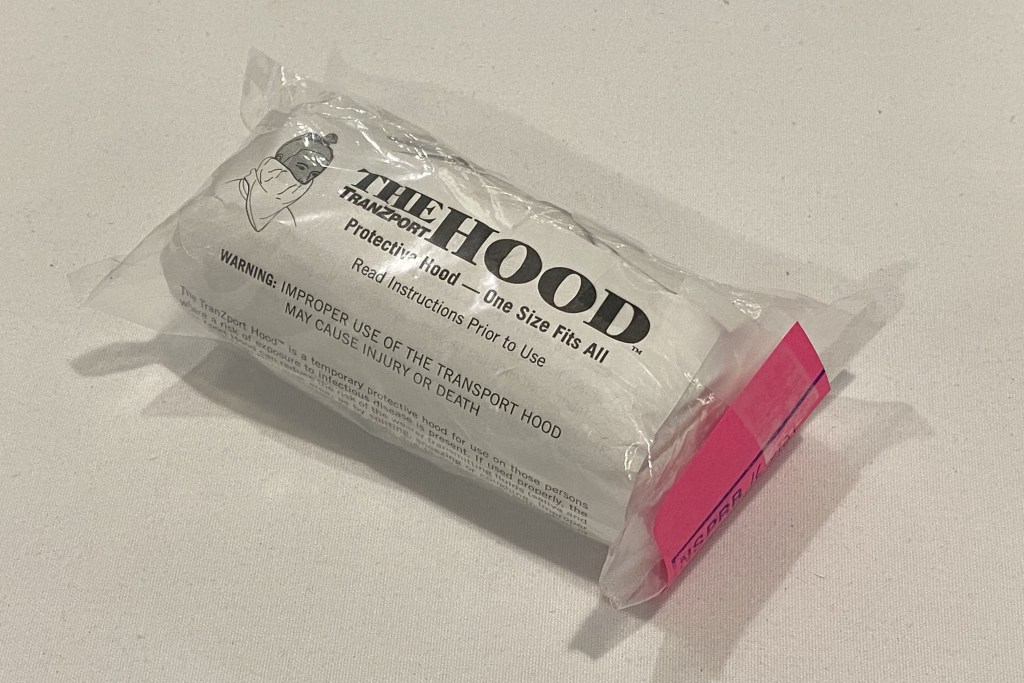 A spit hood, the same kind used by Halifax Regional Police and entered as an exhibit in the Police Review Board hearing into Corey Rogers’ death in custody, is seen on a table at the review board hearing on Tuesday. — Photo: Zane Woodford

She didn’t consider placing a spit hood on a prisoner’s head to be a use of force, even though the police policy for the cells required booking officers to document their use as a use of force.

“It’s just a tool that we use in order to control someone who’s spitting or that sort of thing but it’s not a use of force,” Paris said.

Asked whether she’d ever read the instructions printed on the packaging of the hoods, Paris said she had not. And she’d never been aware that they could be dangerous for prisoners, she said.

“I was not made aware of any indication that it would end in this tragedy,” Paris testified. 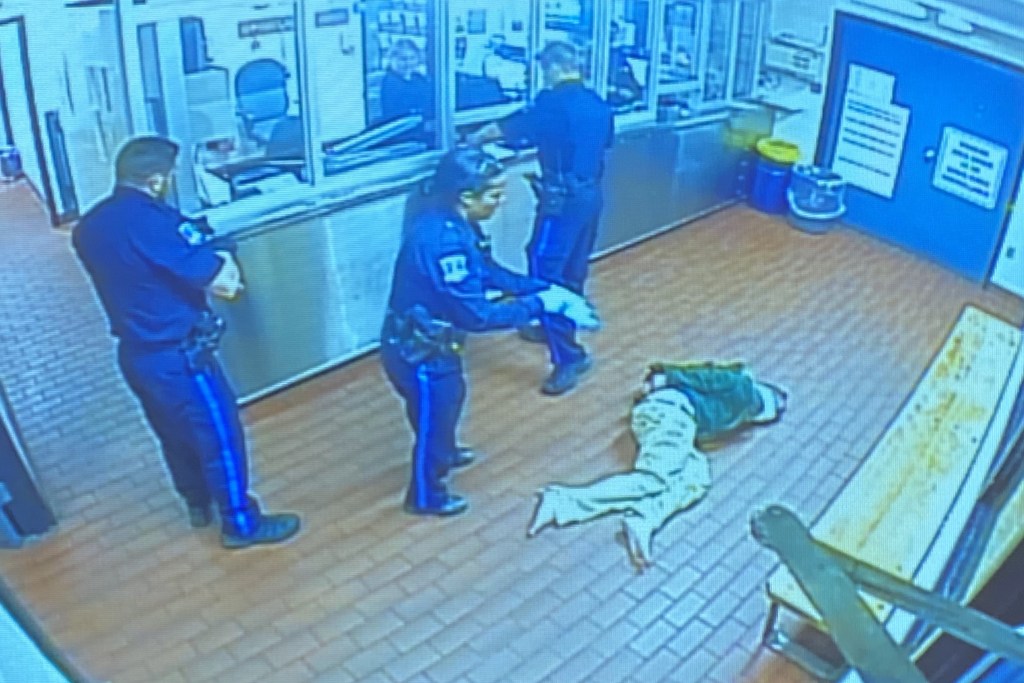 Once inside booking, Paris and the other two arresting officers removed Rogers’ shoes and handed his personal property over to the booking officers, who told them to place him in a specific cell, a dry one, with no bench, toilet or sink.

At that point, Paris testified, Rogers’ safety was the booking officers’ responsibility.

“It’s their responsibility to take care of that prisoner for us,” she said.

Like Murphy, she didn’t believe Rogers was in need of medical attention. She was aware he’d consumed a half-pint of alcohol just before his arrest, but said Rogers’ partner told her he was an alcoholic. She believed he could tolerate a lot of alcohol.

“I don’t know what his blood alcohol level was at that time, but I didn’t believe he needed any medical attention,” Paris said.

The hearing continues Friday morning, when Morris is expected to begin testifying.

In a Nova Scotia Court of Appeal decision released Thursday, Justice Duncan Beveridge lays out the reasoning behind the court’s January 2021 decision to overturn the booking officers’ conviction for criminal negligence causing death.

Special constables Cheryl Gardner and Daniel Fraser were convicted in November 2019, and in August 2020, Justice Kevin Coady sentenced the booking officers to community service and probation.

Beveridge, writing on behalf of himself and justices Anne Derrick and David Farrar, wrote that the trial judge, Coady, failed to properly instruct the jury on the elements of the offence of criminal negligence causing death.

“The judge gave no instruction to the jury on the requisite standard of care,” Beveridge wrote. “With respect, this was fatal non-direction amounting to misdirection.  Furthermore, it was also fatal non-direction to have not clearly instructed the jury to consider all of the circumstances, including those reasonably perceived by the appellants, on the issue whether their conduct amounted to a marked and substantial departure from that of a reasonably prudent Booking Officer.”

While it didn’t form the crux of the booking officers’ appeal case, Beveridge also noted that the trial judge failed to instruct the jury on how to determine whether the Crown (which in this case was Manitoba Crown prosecutor Chris Vanderhooft) had established that the booking officers had caused Rogers’ death.

“The trial judge accurately told the jury ‘causation’ was an essential element.  This required the Crown to prove the appellants’ actions or omissions caused the death of Corey Rogers.  The problem is this: there was absolutely no instruction about how any of the three identified acts or omissions ’caused’ death,” Beveridge wrote.

“The appellants have not relied on the flawed causation charge, but should the Crown decide to proceed with a new trial, care must be taken to understand the difference between cause and manner of death and whether specified acts or omissions of the appellants caused death.”

The Halifax Examiner asked the Nova Scotia Public Prosecution Service whether it plans to proceed with a new trial. A spokesperson, Melissa Foshay, said the case is still with Vanderhooft, the Manitoba Crown, and she will pass on his response to the question.

Foshay updated the Examiner on Friday, writing in an email that a new trial has been scheduled for March 14-25, 2022 in Halifax Supreme Court.