You are here: Home / City Hall / Rethinking the Willow Tree 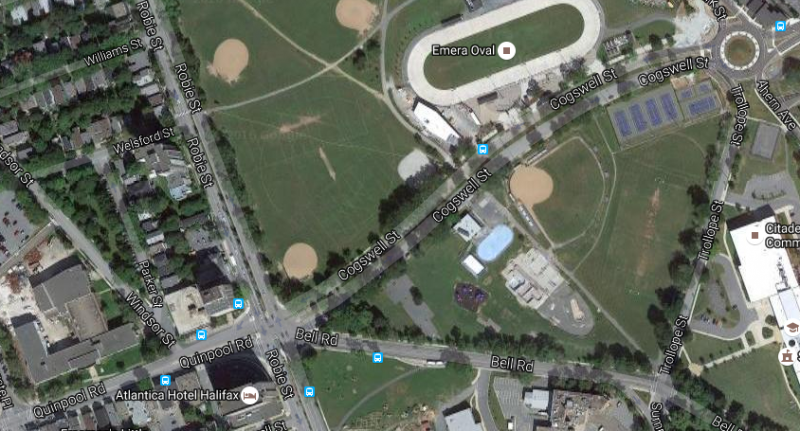 The Willow Tree intersection in Halifax. A proposed re-design has the Cogswell spur removed from the main intersection, and either diverted to Bell Road or closed altogether to traffic, opening up a large piece of real estate on the Halifax Common.

The Willow Tree intersection at Robie Street and Quinpool Road is one of Halifax’s craziest crossroads. While it’s not on the city’s immediate list for a fix, it represents an amazing opportunity to make improvements that could benefit drivers, cyclists, and pedestrians simultaneously. And we could even reclaim some public space in the Halifax Common while we’re at it.

Right now we have the perfect opportunity to collect data that could inform a rational, modern design for the Willow Tree, but we are squandering it.

But what’s so wrong with the Willow Tree in the first place? Well, it’s the confluence of five spurs, making it one of those intersections that is extremely confusing for the uninitiated driver, and a downright deterrent for new or cautious cyclists. The extra spur also makes for longer wait times at traffic lights, which contribute to daily traffic back-ups and the restriction of left hand turns in almost all directions. The Willow Tree is also used by many of our major transit routes, which suffer reliability and lateness issues due to traffic delays. Last but not least, the Willow Tree has extremely long crossing distances for people walking or rolling, despite the fact that it’s in a dense urban setting (which is about to get considerably denser) and adjacent to a major park and active transportation corridor.

Local activist and engineer Ben Wedge (you may have seen his name associated with the Halifax Cycling Coalition, but he’s also involved with both transit and walkability groups) uses the Willow Tree on a daily basis. Just for fun, he decided to test out an alternative scenario for the notorious intersection, using some of the traffic flow modelling techniques he learned in a transportation planning course at Dalhousie while working on his Master’s degree.

Wedge chose to apply the philosophy of NACTO (National Association of City Transportation Officials, founded by New York’s former transportation commissioner Janette Sadik-Khan) to the problem of the five-spur intersection. When faced with too many spurs, says NACTO, simply remove one.

So Wedge did so, by closing off Cogswell just before it hits the Willow Tree, and sending the street left to meet Bell Road at a new T intersection. This way the Willow Tree could return to a standard four-way intersection, with longer green lights and greatly simplified traffic movements. 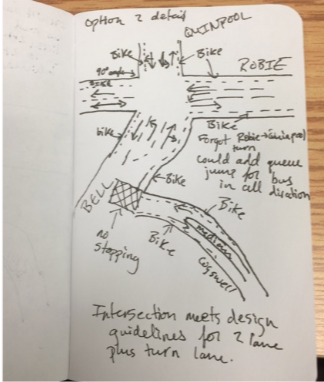 An illustration from Ben Wedge’s presentation on the possible realignment of Halifax’s Willow Tree.

Wedge’s new intersection also makes use of reduced lane widths, as per NACTO standards. With the extra space he allowed room for right turn/bus queue jump lanes to get transit to get through ahead of vehicle traffic, and protected bike paths.

Wedge’s analysis of the changes (an admittedly high-level, theoretical analysis) showed major reductions in traffic wait times. The “level of service” metric used by traffic engineers improved from an F to a C in half the directions, the kind of positive result for driving that Wedge normally doesn’t seek out.

“If you call me next week on any other project that the city is working on and say it improves level of service, I’m going to say that’s a terrible idea, because generally they use an improved level of service to build a bigger intersection. Here we’re not doing that. We are making the intersection more convenient for all road users, which will probably drive up driving a little bit. But that’s made up for by the fact that the buses can get through there, and it’s safe for cyclists. We shouldn’t leave it awful just because awful driving decreases car use.” 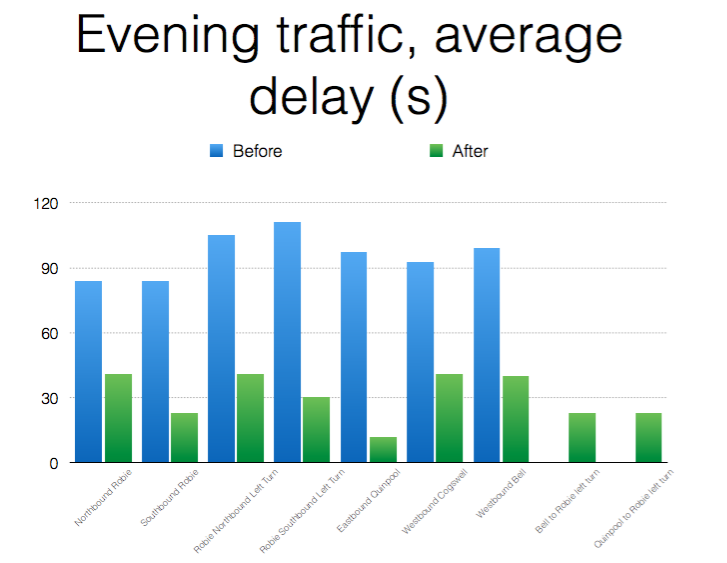 Re-routing or closing Cogswell could result in lower average delays for vehicle traffic through the intersection, according to Ben Wedge’s model.

When Wedge first told me of his idea for the Willow Tree, my first question was why cut a new swath through the Common when we could divert traffic earlier and simply close Cogswell to through traffic? A portion of the boulevard could still be used for drop-offs and parking at the Oval, with the rest used for active transportation paths and greenspace.

Wedge is open to the idea, though he hasn’t run the numbers on the effects to traffic flow at Trollope and Ahern Streets. “Not closing Cogswell keeps the street grid as close to what it is today as possible,” says Wedge, “but I don’t know there’s any inherent value in doing so.”

Whatever configuration works out to make the most sense, there’s an opportunity right now being passed up by city officials. Cogswell Street is closed in one direction right now for road work, and will remain so until November. Last year, it was closed off completely for many weeks during construction of the roundabout at North Park. Both closures afforded a huge opportunity to gather real-world data on the effects of one less spur for the Willow Tree, the kind that could be used to validate or improve on theoretical models like Wedge’s.

Which is why it’s disappointing that another Cogswell closure is happening without any move to document the effects.

“My thought is, if you are closing down half, why not close down all of it for six weeks while this construction project happens, and actually go down and measure it?” says Wedge. “Get your co-op students down there counting traffic and see what happens… If that goes really well, let’s get those bus lanes and bike lanes in there, so that we make that intersection better for everyone. Tighten up those pedestrian crossings so people aren’t walking 30 to 40 metres to cross the road.”

Part of the reason Wedge was inspired to explore the possibilities at the Willow Tree was his dislike of roundabouts in an urban setting.

Though city spokesperson Tiffany Chase says there’s no specific roundabout plans for the Willow Tree, it certainly seems one is in the long term plans for the intersection, if current practices continue.

“I don’t think they are the right solution,” says Wedge, “especially when we are looking at pedestrians in high traffic areas, and we want people to go through safely. There’s other tools that will let us redesign these intersections in a way that keeps them compact, and controls right-of-way in a more respectful manner for people who aren’t driving cars.”

Wedge points out that both the new North Park roundabouts increased total travel distance for pedestrians going through those intersections, though they did reduce the amount of time they are directly in the path of vehicle traffic. “The city focussed on the exposure distance metric,” says Wedge, “which is somewhat reasonable, but ignores the fact that you are making me walk really far just to give me a slightly lesser chance of being hit by a car.” And, he points out, “they sped up the cars, so they kind of increased that chance.”

“You’ve created a situation where newer cyclists are timid, where drivers are trying to pass cyclists in the roundabouts, and pedestrians are travelling a greater distance, when many of the same improvements could have been achieved by just turning them into proper four-way intersections,” says Wedge.

“I would say that NACTO has studied this issue to death and shows the preferred way of treating a five-way intersection is just remove one of the spurs or close one of the spurs. I think we need to seriously evaluate that, to see if that’s the right choice for our city.”

“I don’t think it’s right to have an intersection that sucks when we have a way to make it better.“