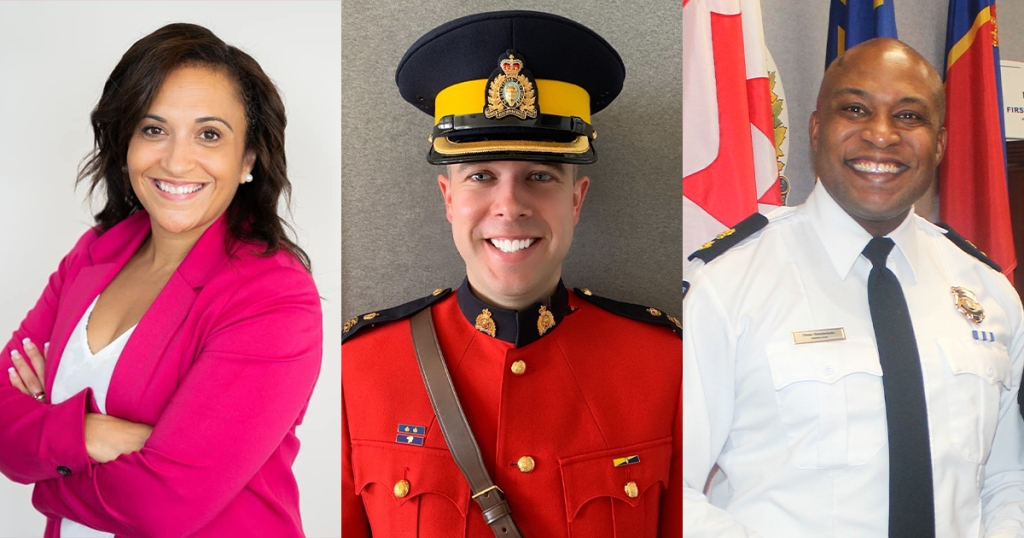 The RCMP have allowed the municipality to release part of a controversial email they sent to some Halifax councillors after a traffic stop in the summer.

As the Halifax Examiner reported last week, the email came to light at a meeting of the Halifax Board of Police Commissioners:

At its virtual meeting on Monday, the board received correspondence from Coun. Waye Mason, a former commissioner, who drew attention to an email sent to some of his colleagues by Insp. Jeremie Landry, at that time in his capacity as acting chief officer of Halifax-district RCMP.

“It was in regard to an event that was widely publicized in the media, which was the police stop that was conducted on Superintendent [Dean] Simmonds of HRP and his wife Angela Simmonds,” Critchley said.

As Matthew Byard reported for the Halifax Examiner, the Simmonds were pulled over at gunpoint in July:

Angela Simmonds was at the time seeking the Liberal nomination for Preston in the provincial election. She later won the nomination, then the election, and is now the MLA for the area. Dean Simmonds is one of Halifax’s highest-ranking police officers, having been on the force 20 years.

Days after the incident became public, Landry, then-acting Halifax-district RCMP chief, wrote to Halifax regional councillors whose districts fall within the RCMP’s jurisdiction — mostly rural and some suburban areas of HRM. That email was included in the correspondence to the board as an attachment to Mason’s letter.

A few days after the meeting, the municipality released a redacted copy of Mason’s letter, in which he raised concerns about the RCMP communicating the details of an investigation with councillors, and especially with only certain councillors.

The actual email itself, from Landry to the councillors, was completely redacted.

On Friday, municipal spokesperson Laura Wright emailed the Examiner, explaining that the contents of the email “called for the municipality to reach out to the RCMP on the disclosure of the attachment.”

“Upon further review, the RCMP advised that the attachment could be partially released,” Wright wrote.

The email reveals that Landry basically said the Simmonds lied about the interaction. 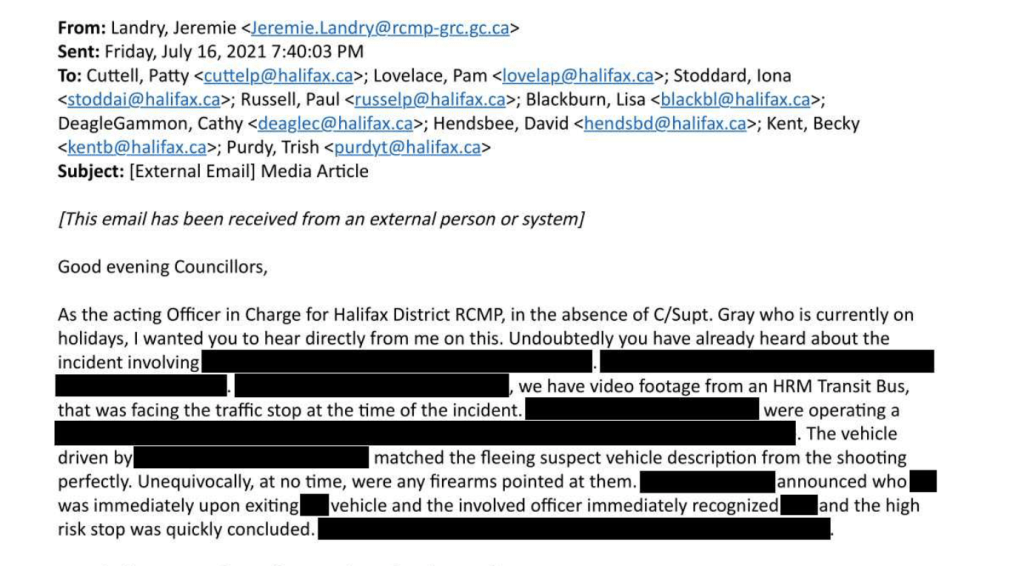 A screenshot of the email sent from Insp. Jeremie Landry to some Halifax regional councillors about the RCMP stopping Angela and Dean Simmonds’ vehicle. It was redacted by the police before being released.  Screenshot: HRM

“[redacted], we have video footage from an HRM Transit Bus, that was facing the traffic stop at the time of the incident. [redacted] were operating a [redacted]. The vehicle driven by [redacted] matched the fleeing suspect vehicle description from the shooting perfectly,” Landry wrote.

“Unequivocally, at no time, were any firearms pointed at them.”

Central to the Simmonds’ allegation was that one of the officers pointed a gun at them.

“We can confirm a gun was drawn but not pointed at anyone during the traffic stop,” the RCMP said in their statement to media on the incident.

The email from Landry went on to quote that entire statement and link to a Global News article about the Simmonds’ allegations. The full version of the correspondence to the police board, including Mason’s letter and Landry’s email, is posted here.

The board is expected to discuss Mason’s concerns about communication between police and councillors at its next regular meeting.