You are here: Home / City Hall / Raw sewage was dumped into the harbour Saturday morning, and Halifax Water tried to cover it up 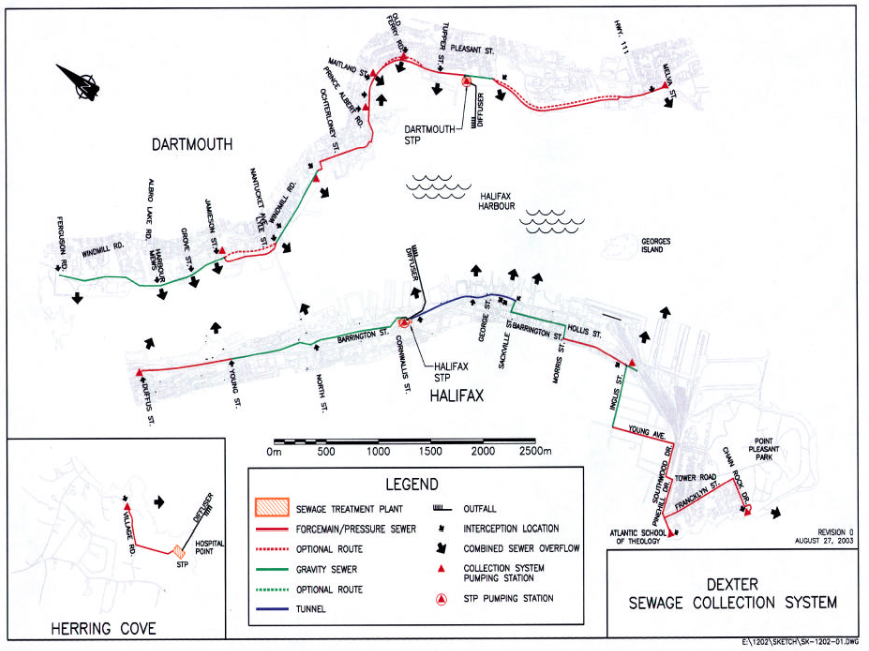 A map of the sewage system, showing pumping stations on either side of the Harbour.

At around 3:30am on Saturday, a man was seen walking on the catwalk under the MacKay Bridge, confirms Sergeant Stephanie Carlisle of the Halifax Regional Police Department.

Security around the bridge has increased in recent years, especially since Holly Bartlett was found mortally wounded under the bridge on the Halifax side of the harbour. Barbed wire has been placed around landfall at both ends of the bridge, which is where the catwalk beneath the bridge is accessed. 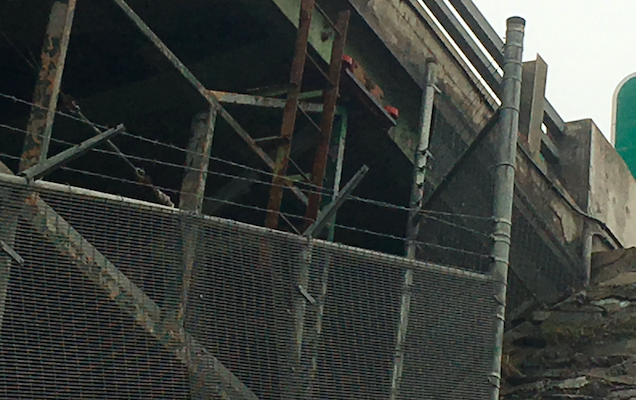 Barbed wire has been pulled back from the fence surrounding the catwalk on the Halifax side of the MacKay Bridge. Photo: Tim Bousquet

But there’s access to the area around landfall on the Halifax side — one needs only to walk up the ramp for cars. There’s barbed wire around the catwalk itself, but when I visited the site yesterday, I found that the barbed wire is pulled back in several places, making it somewhat easier for an agile would-be climber to access the catwalk. 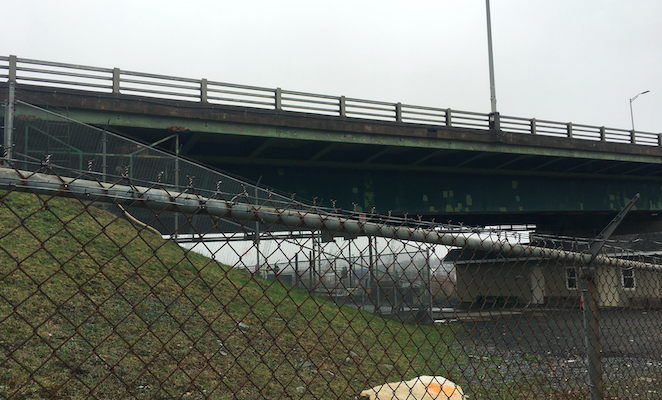 On the Dartmouth side of the bridge, the barbed wire provides no barrier to would-be fence climbers. Photo: Tim Bousquet

On the Dartmouth side, it’s even easier to access the catwalk — the barbed wire has been pulled down completely on the side of the fence closest to the Canadian Food Inspection Agency building.

Saturday morning, the man was seen walking on the catwalk from the Halifax side of the bridge towards Dartmouth. Police could not locate him.

But while the man was under the bridge, he threw some breaker switches that are on the catwalk near one of the towers, Bridge Commission spokesperson Alison MacDonald told me yesterday. That resulted in a power outage to some systems on the bridge, including to a Halifax Water repeater on the tower. The repeater allows five sewage pumping stations on the Dartmouth side of the harbour to communicate with the sewage plant in North Woodside.

MacDonald said that bridge staff were called in to address the power outage and that the breaker switches were reactivated at about 7:30am.

A source with knowledge of the situation told me that as a result of the communications breakdown, the Dartmouth sewage plant released raw sewage into the harbour. (The source is granted anonymity because the source is not authorized to speak for any of the four agencies I’ve spoken with for this article.)

Specifically, with the communications system down, the Dartmouth plant automatically closed its inlet gates, stopping all sewage piped from the pumping stations from entering the plant for treatment; instead, the raw sewage was shunted into an overflow pipe that leads to the harbour.

My source wasn’t clear on the cause of the communications breakdown. The source thought it might have been related to a cyber attack, but the source made clear they were speculating about that.

Saturday morning, I called James Campbell, the spokesperson for Halifax Water. I apologized for calling him on the weekend, but said that someone told me there was a possible cyber attack on Halifax Water systems on the MacKay Bridge that resulted in a sewage discharge.

Later in the morning, Campbell called back to say my source was incorrect, and he asked me to identify my source. I declined. Campbell then provided a narrative of what happened: he said that a power outage momentarily took the pumping stations offline but that each station has a backup generator that kicked in as designed. Campbell categorically denied that there was any disruption of the Dartmouth sewage plant or that raw sewage was released into the harbour; according to my notes of our conversation, his exact words were “there was no loss of service at the Dartmouth sewage plant.”

But Campbell’s narrative made no sense to me. How could a single power outage localized on the MacKay Bridge result in five separate power outages many kilometres away at each of the five pumping stations, which are themselves separated from each other by many kilometres?

So yesterday I asked the Department of Environment if there had been any reports of raw sewage discharges over the weekend. Spokesperson Chrissy Matheson quickly responded, saying that there was a discharge of raw sewage over the weekend but the department needed to find out more information from Halifax Water. I asked for whatever details she could provide, and today Matheson emailed to say that “This matter has been reported to NSE and the details will be verified by an Inspector. What we can confirm is that the discharge took place on April 28 from the Dartmouth facility. The quantity is unknown at this time. I understand that it isn’t much more detail than I originally sent, but it’s all we can say at this point.” 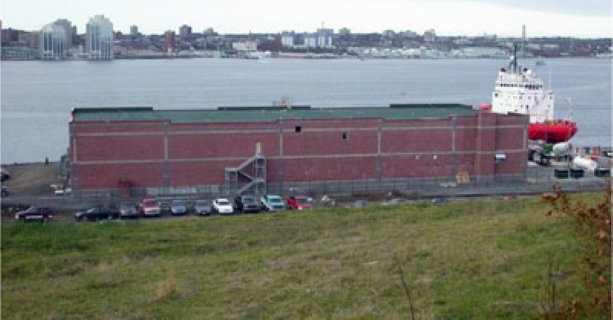 What are the lessons here?

First, the sewage system is a complex system that can be disrupted by unforeseen circumstances like a random person illegally using the bridge catwalk.

It was another power outage, on January 14, 2009, that led to the complete failure of the Halifax sewage plant. If we learned anything from that failure, it’s that worst-case scenarios have to be planned for and expected.

In the case of this weekend’s power outage, the system “worked” so far as it didn’t lead to the failure of the Dartmouth plant  — but is a design that calls for dumping raw sewage to save the plant enough? Should the repeater on the bridge have a backup power supply?

The second take-away is that Halifax Water spokesperson James Campbell gave a reporter an inaccurate — a completely untrue — response to a query.

This wasn’t just an issue of spinning the narrative or eluding the questions — which would be bad enough. But Campbell took it one step further: he relayed a counter-narrative that was patently not true, with facts that made no sense, and he denied a discharge that I could easily verify from another government agency.

Today, I emailed Campbell and asked him to explain himself. He responded:

Let’s be clear: raw sewage was dumped in the harbour. Screening doesn’t change that reality.

Regardless, whether the sewage was dumped from the pumping stations or at the entry of the sewage plant, I can’t see what relevance there is in the sewage plant being up and running if there was no sewage entering it. And in any case, it’s Campbell’s job to clarify; I asked about a sewage discharge — if I had the exact details of it wrong, he should have clarified, not parsed my question so tightly as to avoid an honest answer.

And yes, raw sewage is dumped in the harbour every time it rains so much that the system is overwhelmed — such that more than four times the amount of sewage and runoff through the sewage system when it’s not raining. And that is by design. It’s not the best design; we could separate the storm and sanitary sewage pipes in the older parts of Halifax and Dartmouth (as they are in the suburbs), but that would cost many billions of dollars.

In the scheme of things, a few hours worth of raw sewage going into the harbour isn’t by itself an environmental disaster. As they say, shit happens. But we should understand the vulnerabilities of the system, and plan to prevent such breakdowns. Each unexpected discharge of raw sewage may be indicative of a larger breakdown in operational processes. Understanding why a relatively minor problem happened may prevent a much larger problem from happening in the future.

There’s also a breakdown in communications, which again is relatively minor — who cares if the lowly Halifax Examiner was misled? — but may be indicative of a larger corporate attitude that could lead to larger problems in the future.

For me, this started as a quirky story about how a weird report of someone on the bridge led to some problems with the sewage system. But now I’m thinking it might be a much more important story about management and communications at Halifax Water.

Update, 5pm: Chrissy Matheson, the spokesperson at the Department of Environment sends the following email:

As a follow up from the info I sent you yesterday, I have to correct an error.

I advised that it was the Dartmouth facility that dispensed the sewage. That was incorrect.

Please see the points of discharge:

it is projected screened overflows occurred at the combined sewer overflow locations noted below:

Also, it’s not raw sewage. It is screened. Halifax water can explain the difference. Sorry for the confusion.

I stand by my assertion that there is no appreciable difference between screened sewage and raw sewage. Both are untreated, and both contain feces, piss, and everything else dumped into the sewage system; the “screening” merely catches the largest of the material going through the pipes — tampon applicators and the like.

And again, it was Campbell’s job to clarify, not distort. When I asked him about raw sewage being discharged from the sewage plant, he should have explained that it came from the pumping stations. He left that part out, and instead made up a ridiculous story about power outages at the pumping stations.