You are here: Home / City Hall / People’s Park: ‘None of this is sustainable’

A group of volunteers helping people living in tents and emergency shelters at a Halifax park say while they’re cautiously optimistic about regional council’s shift in direction yesterday, the current situation is unsustainable and they need immediate help.

Claire Chadwick, a spokesperson with P.A.D.S. (Permanent, Accessible, Dignified, and Safer) Housing Network, said that as of Wednesday afternoon there were an estimated 16 people living at the park on the corner of Chebucto Road and Dublin Street. Although officially called Meagher Park, it has become the main site for tents and emergency shelters in the city. 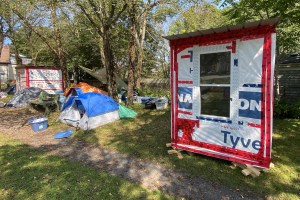 Tents and emergency shelters are seen last Thursday in the park at the corner of Dublin Street and Chebucto Road, which residents and activists there are now calling People’s Park. — Photo: Zane Woodford

“We have a wonderful person who has been camping out at the park for almost a week now to ensure that folks are safe overnight and we have rotating shifts of people, but it’s hard to find a sustainable way to have a 12-hour, midnight to 6am shift,” Claire Chadwick said in an interview on Wednesday.

“Yesterday, we had a wonderful human being who was there for 36 hours straight. None of this is sustainable, and we are most literally building this ship as we sail it. But the city hasn’t left us much of another option.”

‘We keep coming up against dead ends’

Chadwick said a number of community services — including Mainline Needle Exchange — have been referring residents to the park. So have police, reporters, and even other shelters.

Because the site is entirely run by volunteers and not professionals, Chadwick said that despite desperately trying to connect people to services, they’ve been unable to reach or get help from any offered by the city or community organizations. Noting that people are often unhoused due to a lack of services and not just a lack of housing, Chadwick described the situation as “really frustrating.”

“We’re obviously trying to be proactive in getting some of these folks care so that we don’t have to invite police into this space via a 911 call, but it feels like we keep coming up against dead ends. We called shelters for a minor and were told ‘Oh we’re full. Good luck,’ again and again and again,” she said.

“I think all of these services are so under-resourced and overcapacity that people see the folks in that park as being cared for in some capacity and want to wash their hands of them because there are other people in even more dire straits.”

Chadwick said P.A.D.S. Housing Network members are struggling to find residents the most basic medical care, adding that all the food and water at the park has been provided via Halifax Mutual Aid and other forms of charity.

There’s an acknowledgement that the People’s Park encampment needs to wind down, in part because it is close to two schools, and school starts next week.

“We haven’t explicitly been told how school fits in, but based on Waye Mason’s statement from a few days ago there are some concerns about our space being in close proximity to schools (Oxford school and the Muslim academy),” said Chadwick. “Mason has expressed he doesn’t want us within 75 metres of a school or playground. I imagine that his statement is backed by ‘concerned parents’ who worry about the safety concern of the schools and their students (which in my knowledge is not backed by evidence).”

“I think it all comes down to what can be (at least in the short term) sustainable,” she continued. “The last thing we want is for people, and our community, to have to be uprooted (or evicted) into anything other than permanent, accessible, dignified, safe housing. If being more than 75 meters away from a school is what will prevent another eviction, then we will have to do that.”

“The balancing act we’re in right now is making sure that we keep unhoused people close to the services they need, while also finding a space we won’t be evicted from. Moving off the peninsula isn’t really an option, as so many of our residents receive some degree of support from the community organizations on the peninsula. When we add trying to be 75 metres away from daycares/schools/playgrounds into the mix we’re definitely limited in the spaces which work for us.”

Last night, P.A.D.S. Housing Network held a meeting with those living in the park to centre them in any decision-making process as they determine next steps. Chadwick said the general consensus was while willing to move to a new physical space, they wanted to remain together and to maintain the sense of community they’ve built at the park.

Although willing to communicate with or work with the city as part of that process, Chadwick said residents remain hesitant and nervous. 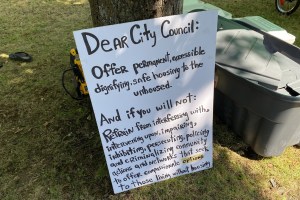 A sign at the park at the corner of Dublin Street and Chebucto Road, now dubbed People’s Park. — Photo: Zane Woodford

“We’ve definitely had a few of our residents call it a family, and a few folks who told us that this is the safest they’ve felt in a really long time because they’ve been living in fear of forced evictions and of violent evictions at the hands of the police,” she said.

“I’m so proud of and inspired by the community that has been able to pull together to create some degree of safety for these really vulnerablized people, but frankly, until the city steps in and really provides us with a sustainable solution, there’s always going to be that fear in the back of people’s minds.”

In the immediate short term, Chadwick said they must reach an agreement with the city to continue operating out of People’s Park, or move to another (hopefully larger) space. She said as part of that conversation, the city needs to “step up” the services they’re providing.

“We’ve only seen outreach workers one time in the entire time we’ve been there, and that’s for people who we know for a fact are on the caseload and are known to these outreach workers and who have very significant mental health concerns,” she said.

While some neighbours have been actively opposed to the tents and emergency shelters at the park, Chadwick said there are many “wonderful” neighbours who drop off coffee, food, wash dishes for them, and dump the site’s compost bins.

“There are definitely also some neighbours who aren’t thrilled or comfortable with our operation,” she said.

“We’ve tried really hard to make our community safe and make ourselves accessible to the neighbours and give them an alternative to calling the police.”

Chadwick said P.A.D.S. Housing Network received a call from Mayor Mike Savage on Wednesday morning. She said he appeared to have what she described as “a renewed commitment” to working with them to find a viable solution.

“I think we’re also holding our breath and don’t want to count on it because the city doesn’t have a great track record with their interactions with us so far,” Chadwick said.

“I’m cautiously optimistic that this will lead to something more sustainable in the short term, and then definitely for permanent, accessible, dignified, safe housing in the medium to long term.”

Chadwick said the shift in council’s attitude on Tuesday gave her some optimism. She does, however, remain concerned by the lack of wraparound services and support.

“We’re hoping for a much more comprehensive plan in terms of how to not just shelter these folks, but to really make sure that they’re being served adequately, because so many of the people that we’re seeing have either been kicked out of shelters or out of hotels or have a companion animal or some other reason that hotels or shelters are not accessible to them,” she said.

“Until we address those concerns, more hotel beds won’t really do all that much.”