You are here: Home / City Hall / Paying for the bus

As Halifax Transit staff start to pick away at the long list of council-requested changes to the transit plan, it’s a good time to mull over how we pay for transit services.

By specifically asking for the financial implications of their 23 items, councillors have brought money to the fore of how we plan for transit. Councillor Stephen Adams further highlighted it by introducing the route cost and revenue breakdown of the 402 Sambro when making his case for continuing the service.

What and how we pay for transit is going to figure strongly in what we change about our transit plan.

There’s the obvious: fares. Unlike most municipal services, a substantial part of the transit budget is covered by user fees: $2.50 per ride for an adult, or $78 for a monthly pass. Halifax Transit took in $33,141,897 in user fees in 2014-15, up 2 per cent from the previous year, even though the number of riders actually went down by 1.5 per cent. When last reported in the 2015-16 annual service plan, Halifax Transit’s “cost recovery” was clocking in at 37 per cent of revenues.

And then there are taxes. Again, Halifax Transit is unlike other HRM departments when it comes to tax revenue.

We pay two dedicated taxes for transit, both delineated on our tax bills, which put just over $43 million into the Halifax Transit budget last year.

The lower rate, about 5 cents per $100 in assessment, is the “regional transportation tax,” levied on everyone but our more remote eastern rural communities (think East Jeddore and beyond.) That means 137,785 properties, or 184,880 dwelling units. Last year, this tax brought in $16,586,700. 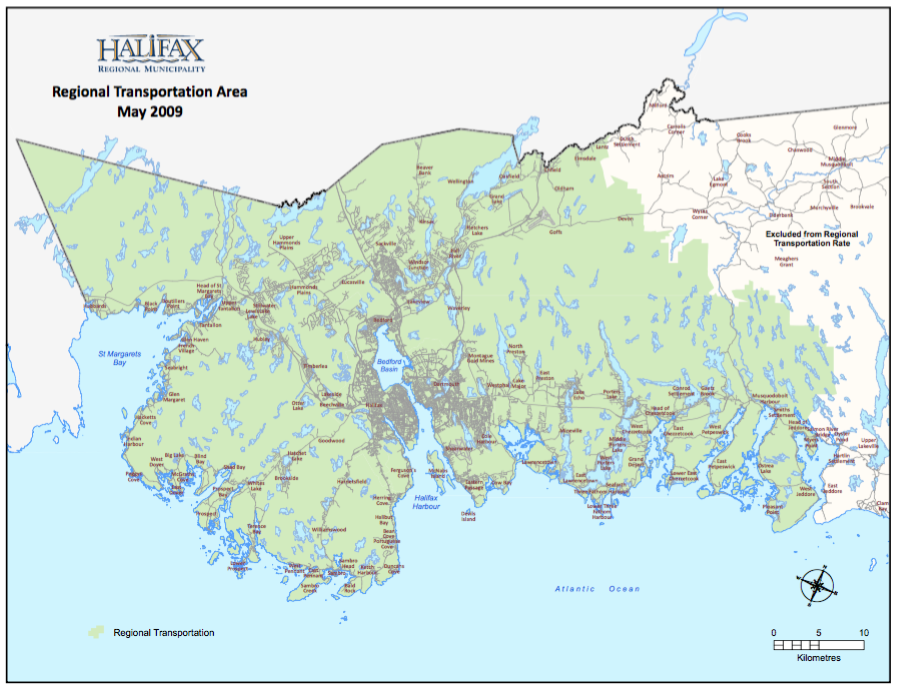 Most of municipality pays the regional transportation tax. Click for the full pdf.

The higher tax is the “local transit area rate (about 10 cents per $100 in assessment) levied on dwellings within 1km of a bus stop. The local rate makes for a strange looking map with small gaps buried in suburbs, where the odd cul-de-sac is out of reach of transit routes. This tax was paid on 97,580 properties last year (or 154,008 dwelling units) and brought in $26,722,200 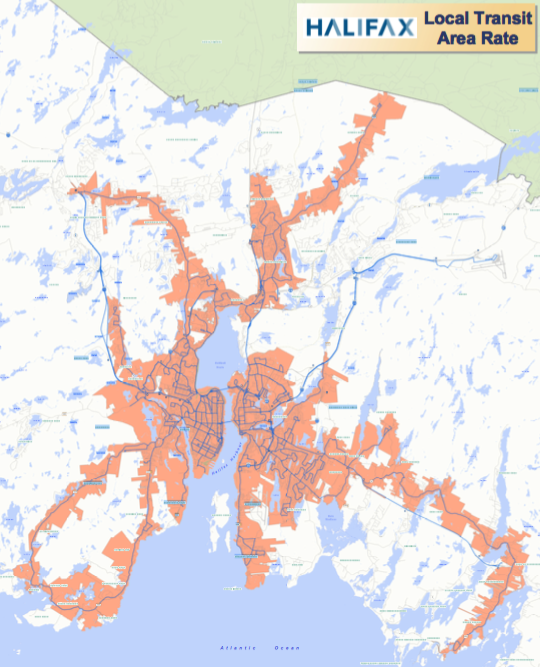 The local transit area rate is levied on properties within 1 km of a bus stop. Click for full pdf.

This is the picture presented by Stephen Adams around the 402 Sambro. The taxation brought in by the approximately 2,000 homes along the loop roughly equals the route costs. If we cut it, Halifax Transit saves $300,000 in expenses, but loses $300,000 in tax revenues. The route appears to break even, or “pay for itself.”

So why not extend service to every part of the municipality where the taxes brought in would cover the cost of the service? That’s a tough nut to crack.

First of all, whether you think the Sambro loop or any other route in the system “pays for itself” is a matter of perspective.

“Does the police department pay for itself because it’s got tax money?” asks Bruce Fisher, HRM’s manager of fiscal and tax policy. “Well, Halifax Transit is self-supporting by that definition: It has tax money, so it pays for itself. Really what happens is the taxpayers are paying for it, not the users.”

“When I look at a route and think does it pay for itself, I think about the fares,” says Fisher. “Very few routes, if any, pay for themselves through the fares.”

Only $17,000 in fare revenue is coming from the Sambro loop, because it is averaging only 25 riders a day. That’s about 5 per cent cost recovery, compared to Halifax Transit’s overall 37 per cent.

“You can always tax people more,” says Fisher, “but that’s not the way we look at it. We try to make sure that people get good value for their money and that we’re not casual about how we levy taxes. That’s the debate they should have, really, is whether they are getting good value for their tax money. Very clearly, it’s subsidized. All of transit is subsidized by the taxpayer whether it’s Sambro Loop or somewhere else.”

If all of our transit taxes were funded by something like our regional transportation tax, then tying individual route costs to tax revenue would no longer be possible. Then, we would be funding a major piece of public infrastructure, acknowledging that its benefits go beyond the ability to walk a kilometre to a bus stop.

“The benefit of the bus service is not just the fact that you can ride on it,” says Bruce Fisher, “it’s that there’s less congestion on the road and there are environmental benefits… We don’t need to build bigger roads if people are taking buses.”

The collective benefits to the municipality are hard to ignore. Besides saving on road infrastructure costs (which are not subject to any user fees in Halifax) there’s the strong argument that transit is a public service because it helps us collectively reduce our impact on our environment.

For some of us, public transit means access to a bus. For others, it means less traffic on our drive to the city. For all of us, it means reduced greenhouse gases.

Why tax it like a service for some, when it’s a necessary reality of the world we live in?