You are here: Home / City Hall / Not satire: Halifax police board to consider appointing committee to define defunding

The board of police commissioners had a lengthy agenda for its meeting on Thursday, but after starting more than half an hour later due to technical difficulties, it only got through its first item.

Public Safety Advisor Amy Siciliano and Youth Advocate Program manager DeRico Symonds gave a presentation to the board on defunding the police. They covered what it means to defund the police, why upstream programming is more effective than policing in preventing crime, and the kinds of programming the city provides. 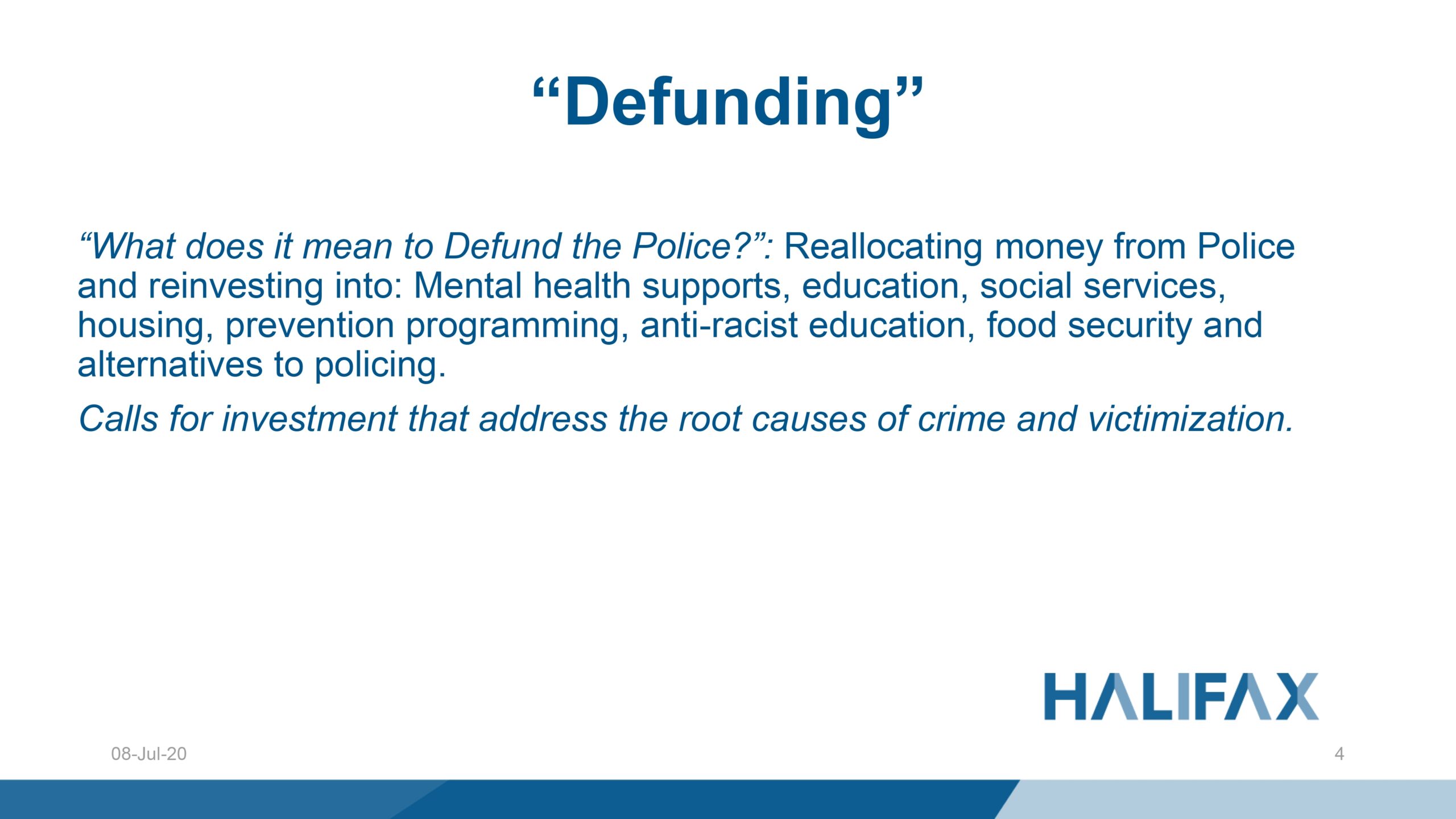 A slide from the presentation.

Halfway through the presentation, the board paused to consider a controversial motion added to the agenda late Wednesday:

The motion uses the language of defunding to then go and reinforce the need for police without actually reducing their funding. Activists and commissioners alike were surprised to find the late addition to the agenda.

Municipal solicitor Marty Ward said the motion came from the clerk’s office and its addition was by the book, but didn’t provide any more detail.

“The motion is really just to make sure that we’re defining and comfortable with what we want to use as the definition of defunding as we move forward and as we look at programs, and as we do that assessment, as we make recommendations or decisions or whatever they may be,” said Commissioner Natalie Borden, chair of the board.

“Because I think we have to be very, very careful to avoid, you know there’s a lot of bandwagoning going on … versus making sure that we’re approaching things from a consistent point of view and really making those decisions based on what that overall understanding that everybody has is.”

After much confusion, the motion wasn’t seconded and didn’t make it to the floor during the meeting.

That the Halifax Board of Police Commissioners appointed a community advisory committee to provide a definition of defunding the police that supports a role for policing in HRM that includes:

The board eventually voted to add a debate of that motion to the next meeting, but they weren’t all convinced it was necessary.

“All of the commissioners here are citizens so I don’t quite know whether or not we need to have another committee to simply reallocate resources,” said Commissioner Carlos Beals.

“I think with the motion, it wouldn’t be to reallocate the resources, it would be to craft that definition that we would use in whatever actions we take after that,” Borden said.

After voting to consider that motion at the next meeting, Siciliano and Symonds got back to their presentation, talking about crime prevention programming the city has or is currently providing.

Symonds runs the Youth Advocate Program, a community-based crime prevention program working with kids aged nine to 15 in 14 areas of the municipality. There are about 45 kids in the program at any given time, and Symonds said they purposely start young to put them on a positive path early in life.

Beals noted the city had a chance to help save a program he worked with that helped older young people — those 16 to 24.

That program, CeaseFire Halifax, focused on Black boys and men with a mandate to reduce gun violence. It started as a federal government pilot program with about $2.7 million for five years. That funding ran out at the end of 2017. The provincial government provided some bridge funding to get it to March 31, 2018, and CeaseFire asked the city to cover the rest of that year.

In a 2018 report to council, Siciliano recommended against providing more funding due to a “lack of evidence demonstrating program effectiveness.” Council voted unanimously in favour of a motion to adapt parts of CeaseFire into municipal programming instead of providing the funding.

On Thursday, Beals questioned the councillors on the committee over their 2018 decision. 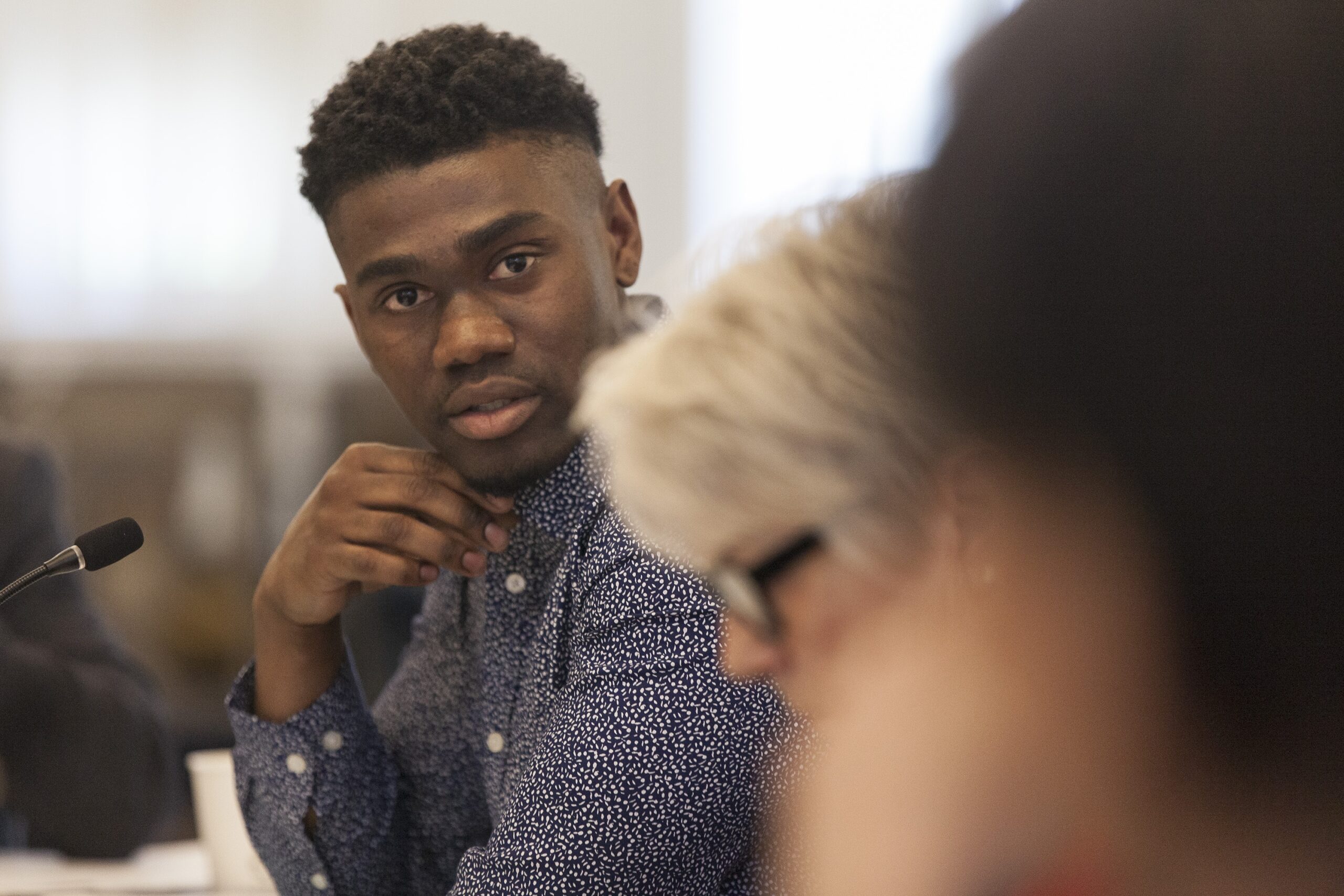 Carlos Beals at a meeting of the board of police commissioners in 2019. — Zane Woodford

“One thing that we know for certain is that African Nova Scotian men are overrepresented in the prison system and grossly underrepresented in services aimed at supporting them. Well you know why? It’s because they don’t have services where they can go and be treated with respect and dignity. And that’s part of the problem, and this is why these organizations that were around are so vital and important to these communities,” Beals said.

“These are assets in the Black community and council has decided to rip them out by the roots and defund them.”

“I don’t disagree with what you’re saying, Carlos,” said Coun. Tony Mancini. “I think if we were having this conversation today about CeaseFire we might see a different result, but that was then and this is now, so how do we move forward?”

Beals said council had a responsibility to “be awake,” and Mancini became increasingly agitated, accusing Beals of being “offside.” Borden had to cut in to get the meeting back on track.

The board eventually deferred the rest of its agenda — discussions of the Wortley report on carding, body-worn cameras, and making police policies public — till its next meeting, scheduled for July 20.

The board also agreed to add another item to that agenda. Coun. Lindell Smith will make a motion to ask for an independent legal opinion on the board getting its own lawyers. Currently, the municipality’s lawyers — the same ones who defend the police force in court — advise the board, which is supposed to be independent from police.