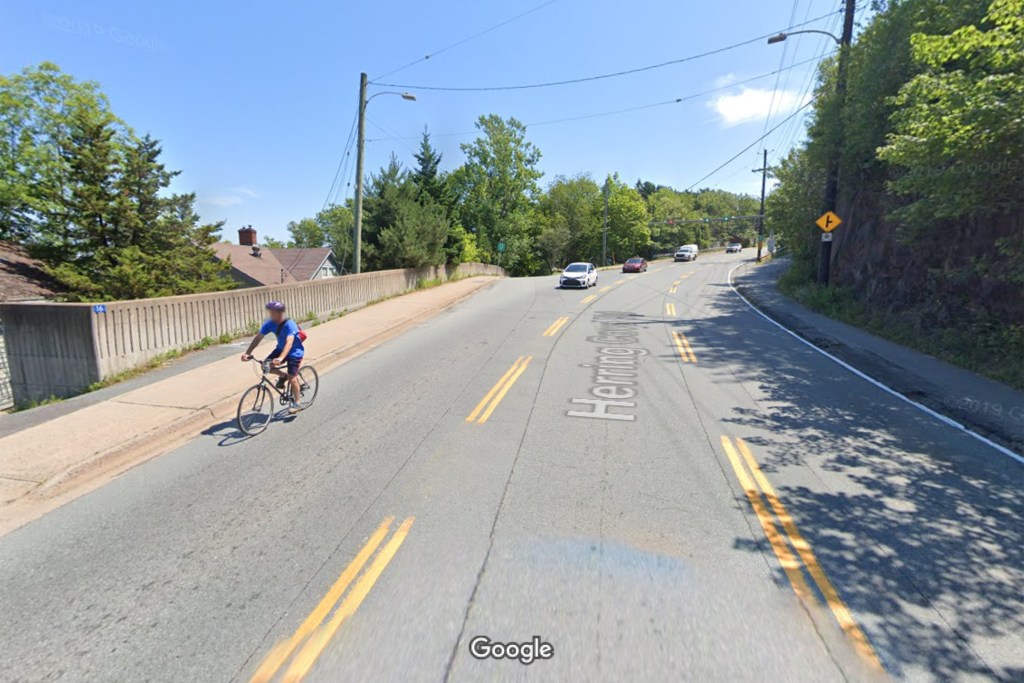 A cyclist travels down Herring Cove Road in a July 2019 Google Streetview image.

Municipal staff are recommending in favour of some big changes to Herring Cove Road, hoping to redesign the busy thoroughfare to favour pedestrians, bikes, and buses.

With significant new development happening in Spryfield — more than 2,200 new residential units are expected to be built in the area over the next 20 years — the municipality wants to get ahead of the transportation demand by encouraging people to use active transportation and transit instead of their cars.

The road is also currently unsafe for pedestrians due to long stretches without sidewalks or with worn-down asphalt sidewalks, and inaccessible bus stops.

On Thursday, Halifax regional council’s Transportation Standing Committee is scheduled to meet virtually, and the Herring Cove Road Functional Plan is on the agenda. The massive, 599-page document includes four reports on the road redesign. It’s the culmination of a process that started in 2018 when the committee asked for a staff report on adding bus lanes and active transportation infrastructure to the road from Spryfield to the Armdale Rotary.

In April 2019, Erica Butler summed up the progress so far for the Halifax Examiner:

The city is creating a new functional plan for Herring Cove Road, featuring an “interim” plan with considerable improvements to walking and cycling, and an “ultimate” plan that includes some short but key transit lanes.

The complete plan, which you can see here, looks very promising, but the unknown timeline for implementation, especially when it comes to transit improvements, takes the potential wind out of its sails.

That plan was complete by September 2019, but in the report coming to the committee next week, transportation planning engineer Harrison McGrath writes that “it was determined that the scope and final deliverables did not provide the level of detail required to advance to detailed design between the Armdale Roundabout and Cowie Hill Road due to the complicated nature of this section.”

That was a 30% design, so the municipality then commissioned another plan just for that first section, a 60% design.

The consultant tabled that 60% design in September 2020, partially incorporating the city’s new Rapid Transit Strategy and its planned bus rapid transit route for the road (the yellow line), along with necessary land purchases to enable the plans, and two options for the section just before the rotary. The 60% design also ran with the more expensive option from the 30% design — the “ultimate” plan, which includes more transit infrastructure at nearly 10 times the price, a Class D (very rough) estimate of $21.6 million versus $2.2 million.

The preferred design now incorporates a shared active transportation path, for cyclists and pedestrians, along the east side of Herring Cove Road from the Armdale Rotary to Glenora Avenue, and a standard sidewalk on the west side. From Glenora Avenue to the 500 block, the plan calls for separated bike lanes and sidewalks on either side of the road. This is a slight departure from the 2019 plan, which had the separated bike lanes and sidewalks stretching further toward the rotary, to Cowie Hill Road.

In terms of transit infrastructure, the Rapid Transit Strategy contains plans for bus lanes in either direction for most of this part of Herring Cove Road.

As part of the 60% design, the municipality considered adding outbound lanes on the whole stretch. 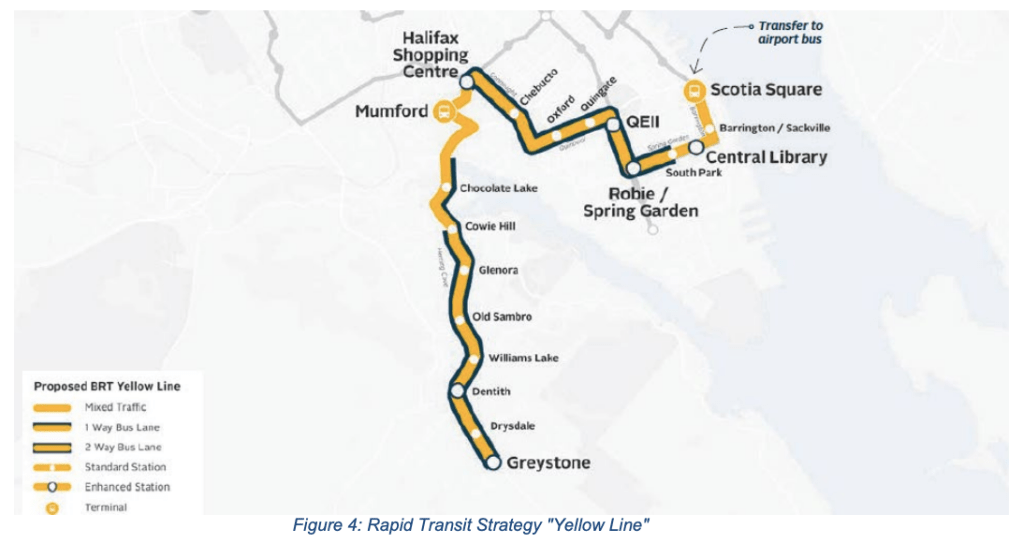 After Purcells Cove Road outbound, the consultant contemplated two options in the 60% design: an in-bound lane from Cowie Hill Road to the rotary with some transit-only traffic signals outbound (Option 1), or bus lanes in both directions from Purcells Cove Road to Glenora Avenue (Option 2).

Both options also include realigning intersections like Purcells Cove Road and the curve in the road at Osborne Street, and while there are no private vehicle lanes being added, both options require road-widening and land-purchasing.

There are also steep hills along the side of multiple sections of the road where the municipality would have to build new retaining walls — nearly a kilometre of walls in Option 1 plus an extra 110 metres for Option 2.

The cost estimates don’t include property acquisition costs, but Option 1 would be $10.2 million and Option 2 would be $12.1 million, taxes included. Those figures are part of the total project, not on top of the roughly-estimated $21.6 million for the full stretch of road.

There is potential for significant travel time savings for inbound transit service on Herring Cove Road with the introduction of a continuous transit lane from Armdale Roundabout to Glenora Avenue;

There is less potential for outbound transit travel time savings. Considering the higher costs and property impacts associated with Option 2, the benefit/cost of Option 2 is less than Option 1.

Who’s paying and how long will it take?

“It is not clear how the funds will be distributed, but it is likely that HRM will received some amount of funding towards the construction of the [Rapid Transit Strategy] network, including Herring Cove Road,” McGrath wrote.

“Federal funding cannot be used to purchase land, so all land acquisition would be funded solely by HRM. In order to fully benefit from this new funding stream, land will need to be purchased in advance.”

The municipality is budgeting $3 million for land acquisition for these kinds of projects across HRM in 2021-2022, and $1 million for the three years after that. There’s no cost estimate in the reports for the land necessary.

The project will happen over the next five to 10 years, according to the report, constructed in phases and dependent on when the city can access that federal funding.

If the committee passes the recommendation before it on Thursday, it would recommend that council endorse the plan. Then council would vote on whether to direct city staff to tender for a 60% design for the rest of the road, from Glenora Avenue to Greystone Drive, and start buying up land.