Municipal staff are proposing the creation of a limited number of city-sanctioned tent sites in response to the housing crisis, but advocates for unhoused Haligonians worry the recommendation will mean forced eviction for people sleeping in municipal parks.

“In recognition that some individuals will be unable or unwilling to accept indoor shelter and that demand for indoor shelter beds exceeds capacity, it is proposed the municipality designate spaces for outdoor overnight sheltering,” Chauvin and MacDonald wrote. 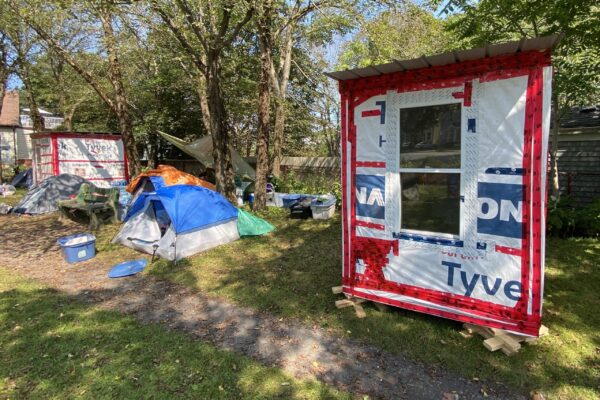 Tents and emergency shelters are seen in August 2021 in the park at the corner of Dublin Street and Chebucto Road, which residents and activists there call People’s Park. Photo: Zane Woodford

There are 562 people experiencing homelessness in HRM as of April 27, according to the Affordable Housing Association of Nova Scotia, and there are only 220 shelter beds in the municipality.

In response, Chauvin and MacDonald’s plan would allow 20 people to stay in parks long-term, while allowing another 44 to sleep in select parks overnight.

“Two types of spaces are proposed to be designated. The first is for one-night only stays, where an individual can set up a tent after 8 pm but must remove it and move on from that location by 8 am the following morning. The second is multiple-night stay locations where an individual can pitch a tent and leave it standing for multiple days and nights. In both instances, designated sites are only meant to provide a space for those experiencing homelessness to shelter, not recreational camping,” Chauvin and MacDonald wrote.

“A maximum of 4 tents per site is proposed in order to contain the size and complexity of management of the locations. Depending on site configuration, some locations may only be able to a smaller number of tents.”

The locations are chosen based on several criteria, including that they not be close to schools and playgrounds or even “horticultural displays or gardens.” The long-term locations would have washroom facilities, and where possible, potable water.

Not on the list is People’s Park, known to the municipality as Meagher Park, at the corner of Chebucto Road and Dublin Street. An ever-changing number of people have been living there ever since the municipality and police evicted people from other parks on August 18, 2021, when police pepper sprayed and arrested protesters defending emergency shelters outside the former Halifax Memorial Library on Spring Garden Road.

While Chauvin and MacDonald acknowledge that enforcement action left people traumatized and damaged trust between HRM and its residents, their report leaves the door open for the same thing to happen again.

“If the occupant of a tent, shelter or other structure in an area not designated for shelter refuses to move and the occupant has been offered a suitable housing alternative or space in a designated area, the municipality may require the occupant to move through enforcement actions,” Chauvin and MacDonald wrote.

P.A.D.S. Community Network formed to support the residents of People’s Park, and has been lobbying councillors to allow sheltering in all municipal parks. In line with the new report, councillors said their preferred approach was to selected a handful of designated parks.

In a statement on Monday, P.A.D.S. said Chauvin and MacDonald didn’t consult with any unhoused people in writing the report. While they recommend working with the United Way to create a committee of people with experience of homelessness, the report doesn’t say whether the authors consulted with any unhoused people before writing, just “dozens of service providers, stakeholders, staff, and residents.”

P.A.D.S. is worried people will now face greater risk of violent eviction at the hands of city staff or people.

“In short, this report offers nothing except more criminalization for the unhoused residents already suffering the indignity of homelessness. With the meager addition of 20 outdoor sites with the minimal infrastructure that it promises, it strips unhoused people of the little security that they have found over the last many months, without even the dignity of consultation,” P.A.D.S. wrote.

“If passed, this process will no doubt lead to unhoused people being forced to downgrade their current accommodations out of fear. It reads as nothing more than a formal procedure before removing unhoused people ⁠— and encouraging them to remove themselves  from sight.”

Likewise, Mutual Aid Halifax, the anonymous volunteer group erecting emergency shelters in the municipality for the last year and a half, issued a call to action in response to the report.

“This report threatens violent evictions and further criminalization of our unhoused friends and neighbours if they refuse to be forced into inadequate, government-mandated encampment sites,” Mutual Aid wrote.

The group wants its supporters to pressure councillors to opt for one of the alternatives listed in Chauvin and MacDonald’s report, to “permit sheltering anywhere in municipal parks,” as P.A.D.S. requested.

Council meets at 2pm, with the meeting broadcast here.