You are here: Home / City Hall / Monday’s big changes to bus routes could be good news

On Monday, bus routes in Halifax will undergo their biggest change “in at least 30 years,” says Patricia Hughes, manager of planning and scheduling at Halifax Transit. Mostly affecting Clayton Park and Fairview (all but one route at the Lacewood terminal), the Monday route changes are part of the five-year-long implementation of the Moving Forward Together plan, which aims to move Halifax closer to a simplified, transfer-based bus network.

The changes promise to be positive. The three new corridor routes will be slightly shorter than the routes they replace, but will have increased frequency, for the most part.

The new corridor 4, which will run from Lacewood to Saint Mary’s, is the most impressive, with headways (time between buses) from eight minutes to 15 minutes during the week, going up to 30 minutes on weekends. That’s frequency on par with the popular route 1 Spring Garden. The 4 route replaces (with the odd connection) the 17, 18, and 42, which had headways in the 20-30 minute range.

Short headways are important, says Scott Edgar of It’s More Than Buses, because they can reduce wasted time (both in waiting for connections and in killing time because your bus arrives earlier than necessary), and help create a system where looking at a schedule becomes unnecessary. “That’s a big part of why you see increased ridership on routes with increased frequencies,” says Edgar. “For anyone who depends on transit, waiting time is part of what they have to factor in to their daily schedule.”

The new corridor route 2 (replacing current routes 2 and 4 with half-hour headways) also features an upgrade in frequency, with 15-minute headways during peak hours, and even on Saturdays.

The new corridor route 3 doesn’t fare as well. It replaces the popular route 52, and runs from Lacewood to Burnside. The headways on the new 3 are between 15 and 30 minutes during the week, pretty much on par with what’s currently on offer with the 52. Edgar would like to see that improve. “For a corridor route, something that is supposed to be kind of a backbone of the network,” says Edgar, “we think higher frequency service would be a better way to go there.”

Along with general increases in frequencies, there are some losses, though nothing as dramatic as last year’s closure of the route 402 to Sambro. A section of Chain Lake Drive running past the Value Village will lose service, and though there are walkable stops at either end, the lack of sidewalks connecting them has been pointed out by riders on social media. 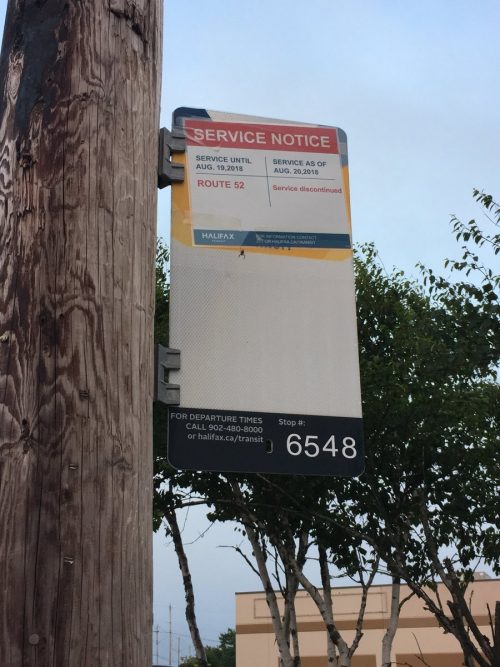 This stop on Chain Lake Drive will no longer be serviced as of Monday, August 20th. Photo Twitter User @JayeRyane

“Because of this consolidation, and trying to simplify the network and make it more navigable, there’s certainly areas where people have greater walking distances,” says Hughes. “This is not the same situation where there are entire communities that are just without service at all. But it does mean for some people that their trips are definitely adjusting. People have to transfer more and in some cases and have longer walking distances.”

On the plus side, says Hughes, the changes should put more properties within walking distance of a transit stop. “It is different and you know depending on your perspective it’s better or worse,” says Hughes. “We’re introducing a very long-sought-after connection from Mumford straight out Washmill Lake Drive to Bayer’s Lake. So for a lot of people, that’s a lot better.” 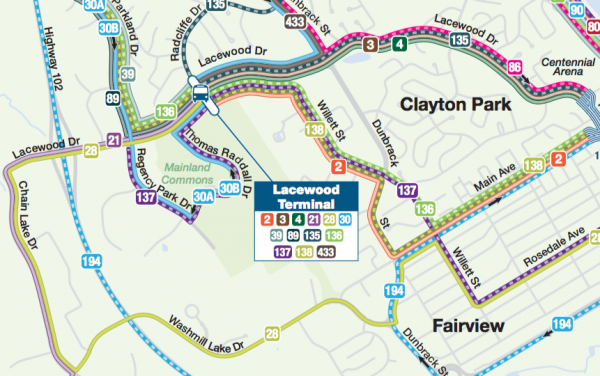 Edgar, despite having criticisms of the Moving Forward Together process, is expecting positive results. “These changes, especially for Clayton Park and Fairview,” says Edgar, “are unquestionably a huge improvement over the status quo.”

And there’s a precedent for that improvement. In its recent quarterly report covering the first three months of 2018, Halifax Transit reported that the last set of Moving Forward Together changes, which took place in November and focussed on the Spryfield area, yielded a whopping 26 per cent increase in weekday ridership over the same period last year, along with healthy 13 per cent and 20 per cent increases for Saturdays and Sundays respectively.

Edgar calls the results “astonishing.” “If it were half what it is I would be impressed,” he says. “It shows how much latent demand there was for genuinely frequent service.”

Hughes is pleased with the Spryfield bump in ridership as well, which translated into an overall 2.5 per cent bump in bus ridership for that quarter, and a 0.7 per cent increase for the whole year. After three years of decreasing counts on buses, this is very good news for Halifax Transit. If the ridership bump in Spryfield is maintained, and if Monday’s increased frequencies out of the Lacewood terminal yield similar results, Halifax could actually be turning the corner on its ridership slump.

“It’s been a huge amount of work,” says Hughes. “We’ve been working towards this change on Monday for over a year in my office.”

But as positive as Monday’s changes might be for ridership numbers, Edgar and It’s More Than Buses still have substantial criticisms of the Moving Forward Together plan. The group has long maintained that the 10 corridor routes outlined in the plan are not quite right, and that Halifax Transit should bring in an expert to advise them on this major part of the network design.

Council first asked for a report on hiring such an expert in December 2016. Six months later Halifax Transit came back with a recommendation not to. Council chose to ask for one anyway, and approved a motion in June 2017 to “engage a consultant to prepare a report including travel time mapping in 18/19 that outlines any recommended modifications to Corridor Routes, as shown in the Moving Forward Together Plan.” The timeline of “18/19” means that four out of 10 new corridor routes have proceeded in advance of the expert advice.

“It’s not ideal,” says Edgar. “[These changes] should have been done once Halifax Transit was good and confident that they had exactly the right routes that they’re going to want to have for the next 30 to 50 years. The corridor routes should be the routes that Halifax Transit is thinking about for possibly converting into BRT [bus rapid transit] and possibly converting into light rail when that happens. So the idea that we’re implementing them now without a very high degree of certainty that they’re going to stay where they are, that doesn’t seem like the best way to do this process,” says Edgar.

On Monday, we’ll start to hear what riders think of it.

Inevitably, says Edgar, “there are going to be headaches,” as riders figure out their trips in a new route system. Halifax Transit has been handing out pamphlets (available in eight languages) at terminals, and have created a fair amount of online content to explain the changes. Perhaps most importantly, the new scheduling data is already online and so all transit apps will display the new route info for any trips with a departure date on or after August 20.

Halifax Transit will have about 20 staffers out and about to answer questions on Monday, through Hughes is not predicting mass chaos. “Last time when it actually came to the day that the service changed, the passengers really knew what they were doing. You know everyone had gone online or read the pamphlets and sorted it out. So we are really not expecting a lot of questions or concerns on Monday because I feel like there’s been a lot of awareness. We’ve had a lot of questions, a lot of phone calls, emails and have talked to a lot of people already,” says Hughes.