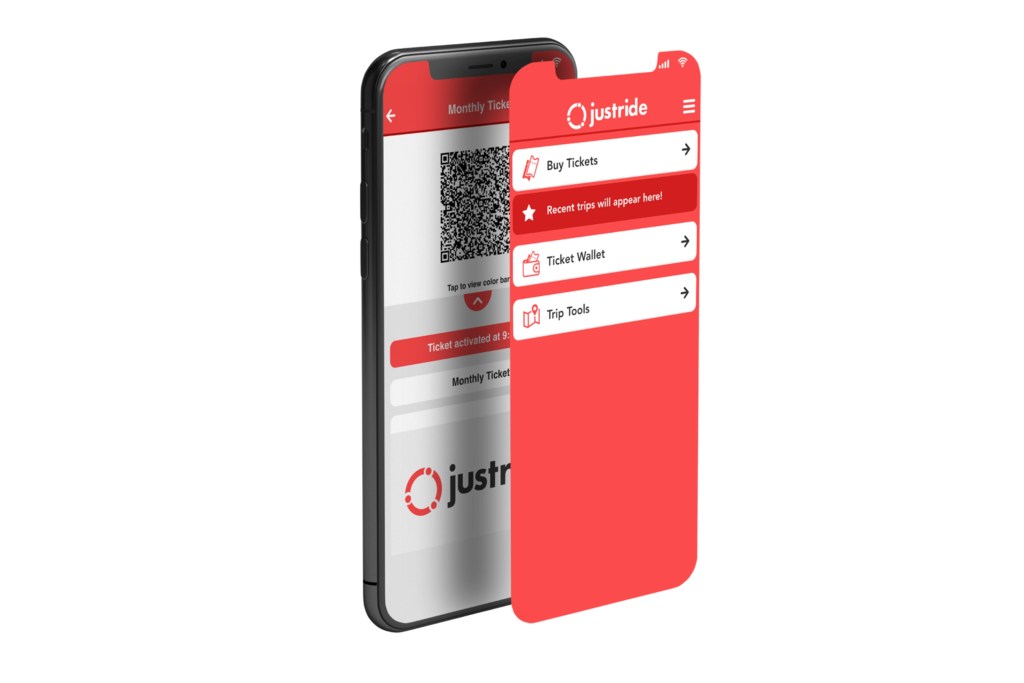 Halifax Transit’s mobile ticketing is running late, but it’s on the way.

Halifax regional council approved a contract at its meeting on Tuesday with Masabi, a UK-based company, for $1.5 million “for a mobile fare payment application and onboard validators” and five years of technical support.

Council approved the plan for mobile ticketing in July 2020, as the Halifax Examiner reported back then:

Regional council voted unanimously in favour of Halifax Transit’s new fare management strategy at its meeting on Tuesday, agreeing to start with a mobile ticketing application using “visual validation” — meaning you’d show the driver your phone like a transfer when boarding the bus.

Under the second phase of the new plan, Halifax Transit would install new fare boxes to automate ticket validation. Next, they’d introduce a reloadable smart card, and eventually make it possible to just tap a debit or credit card on the fare box when boarding the bus.

That last step is the “holy grail,” according to Coun. Waye Mason.

“That’s where we want to get to,” Mason said Tuesday.

The new strategy is a departure from the 2018 plan to install new fare boxes that would take full bills and spit out transfers. That system also would’ve meant replacing the small square tickets with bill-sized tickets that became the talk of the internet a few years ago.

Smith asked whether Halifax Transit would still offer tickets and passes. Marc Santilli, manager of technical services, said they’d have to keep cash, ticket and passes at least in the short term to accommodate people who don’t have smartphones.

Masabi’s website advertises its “Justride” platform, which fits the description of what Halifax was looking for.

“Passengers can use the ‘ticket machine in their pocket’ or the ticket in their wallet and just ride,” Masabi writes.

Santilli told council the app could take up to four months to get up and running.

“Our goal is to get this in place as quick as possible. Realistically, I think it’ll it’ll be at least a couple months, but we will push as quick as we can,” Santilli said.

The subsequent phases, requiring the validation box, will come about nine months later, he said. How many phases is still unclear; Santilli said he’s not sure the municipality will need reloadable smart cards if it can skip right to debit and credit cards.

“Because along with smart cards, you would need vending machines of some sort where people could fill them up, they would need to be able to acquire them, whereas virtually everybody has a credit card or a debit card,” he said.

Mason pointed out that many low income people won’t have smartphones or debit or credit cards with tap capability. He encouraged Santilli to get in contact with community groups to make sure there are more accessible options.

Santilli said the system will be flexible and adjustable to Halifax Transit’s needs.

The Halifax Convention Centre will is projected to lose less money next year, according to the Crown corporation that runs it.

Events East presented its 2022-2023 business plan to council on Tuesday, including the projected deficit for the current fiscal year, $7.45 million. HRM and the provincial government will split that cost as 50-50 shareholders. 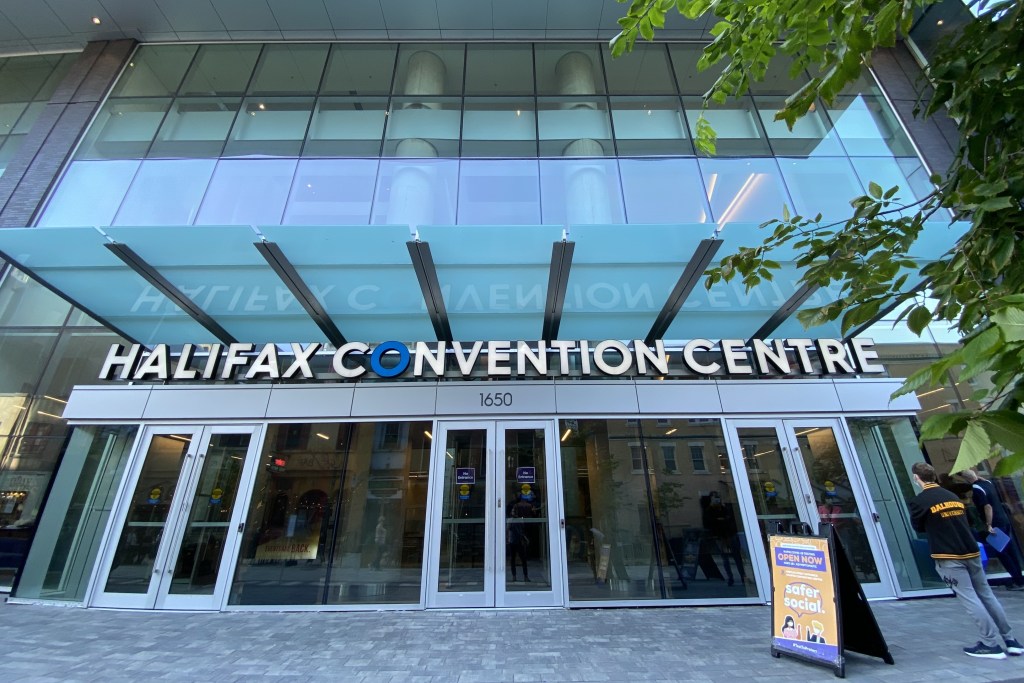 A man waits for a COVID-19 test outside the Halifax Convention Centre in September 2021. — Photo: Zane Woodford

According to the business plan, the forecasted losses for 2021-2022, the fiscal year that ended March 31, were about $9.26 million. That year’s business plan projected $8.4 million.

“While our annual report and financial statements aren’t public yet (they have been submitted and are pending approval by HRM and the Province), at year end we ended up meeting the original budget and in fact came under at $8.3M against a budget of $8.4M. The forecast of $9.3M was accounting for some uncertainty around event activity at the time due to the impact of the pandemic and temporary closure associated with the third wave,” Esiyok-Prime wrote.

“The trend continues to look strong as we move forward, and … Halifax is well-positioned to capitalize on that and be a leader in Canada in the event-listing business as it relates to conferences and conventions,” Cussons said.

Councillors hope their new environmental report will persuade a developer to respect the ecology of the Sandy Lake area, but it’s ultimately up to the provincial government.

The site, bounded by Hammonds Plains Road and Highway 102, is home to a city park and a big tract of developer-owned land. Clayton Developments and other landowners in the area want to build 6,000 homes in the area. Environmentalists, notably the Sandy Lake – Sackville River Regional Park Coalition, want to see HRM’s park expanded to protect the land.

But the provincial Department of Municipal Affairs and Housing, and Minister John Lohr, declared Sandy Lake one of its Special Planning Areas earlier this year. That means council, and the public, have no say in what gets approved or when. An unelected task force with minority HRM representation that meets only in secret will make recommendations to the minister, but it’s ultimately up to Lohr.

Seeing this coming after the province made some legislative changes last fall, council asked for an independent report recommending park barriers to protect the waterways and habitat of the area.

HRM hired McCallum Environmental Ltd. to conduct “an ecological features assessment” of the land, and that report came to council on Tuesday.

McCallum produced mapping that “shows the areas that are of higher or lower ecological value based on the chosen characteristics identified by Regional Council in their November 9, 2021 motion: water quality, multi-aged and old growth forest, species at risk habitat, and wildlife corridors,” as staff wrote in the preamble.

The consultant’s main finding was that the land of highest ecological value is already parkland, or adjacent to parkland.

Staff recommended the report be used to organize “the form and location of development to best protect: a. the suggested widths for important corridors, b. the suggested riparian and watercourse buffers, and c. the identified areas of predicted old or mature forest.”

Coun. Lisa Blackburn proposed an amendment to add the words “at least” to that part of the motion — “at least the suggested widths” — in an attempt to make sure the buffers are as wide as possible. But regional policy manager Kate Greene told council the developer has already expressed concern about the buffers.

“The developer has called and is concerned that those minimum widths will be too great and will severely impact the development in such a way that it won’t be feasible,” Greene said.

“That doesn’t mean we won’t work to those widths, but if you require it as council it could effect whether or not the development can proceed.”

Coun. Shawn Cleary wondered aloud whether it would make the developer run to the province.

“Everything in development is negotiation,” Cleary said. “So my only concern is if we say, ‘No, it’s gotta be at least this,’ and we go ahead and do ‘at least’ that, then the minister says, ‘Hmm, no, we don’t care anyway, we’re going to grant you approval for something smaller.”

Blackburn argued the amendment would send a strong message to the province and the developer that HRM values the land. And it passed, 12-3, with Cleary, Coun. Waye Mason and Mayor Mike Savage voting no.

A developer’s plan to restore the historic Elmwood hotel and tack on a modern addition got council approval on Tuesday, but it still has to go to the Design Review Committee. 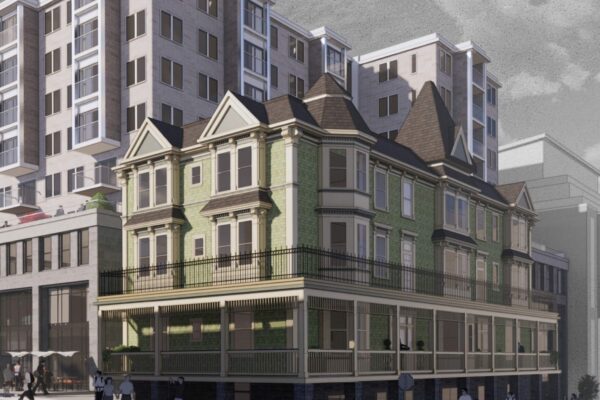 A rendering of the proposed addition and alteration to the Elmwood. — HRM/Zzap Consulting

As the Examiner reported in May, the building at the corner of South and Barrington streets, dating back to 1896, was at risk of demolition under the previous ownership of Peter, Paul, and Renée Metlej’s Principal Developments:

In 2018, it was sold to a different Metlej family business, Anthony, David, and Elias Metlej and Anna Kabalen’s Galaxy Properties. The new owners started working with municipal staff on a proposal back then, and it came to a virtual meeting of council’s Heritage Advisory Committee on Wednesday.

Galaxy’s plan, submitted on its behalf by Zzap Consulting, is to pick up the Elmwood, move it closer to the street and put it down on top of a new foundation. It also includes rehabilitation of the building’s windows, trim, and roofing, and the restoration of some lost elements, like the full wraparound porch and wrought iron parapet, municipal heritage planner Seamus McGreal told the committee.

A rear wing would be removed, and a new nine-storey structure added. That would bring the number of units in the overall building from 12 to 79.

Another building behind it on Barrington Street, the one with the pink mural, would be demolished.

McGreal told the committee that while the Elmwood itself is not a heritage property, it’s part of the Old South Suburb Heritage District.

“The Elmwood itself embodies the heritage value of the district since it is itself a transition from a Georgian building to a Victorian-style building and nothing will will change as part of this development proposal with respect to its heritage value,” McGreal said.

“I’m really thrilled with this proposal. I love the Elmwood and it’s great to see some changes to improve it,” committee member Martha Caswell said.

Council held a public hearing on Tuesday for the proposal, a substantial alteration to a “contributing heritage resource.” No one spoke, and council unanimously approved the alteration.

The Design Review Committee, with its next meeting scheduled for August 11, has the final say.