Starting in 2020, the city will be rebuilding Spring Garden Road between Queen Street and South Park Street. And sometime this winter, city council will decide what the new street will look like.

Staff have proposed three options on which to gather feedback as part of the functional design phase. You can check them out and weigh in online here, and there’s another chance to hear from project planners in person today, Thursday, January 10 from 10am to noon in the lobby of the Central Library.

In case you are wondering whether or not it’s worth taking the time to weigh in on another project that might not get built, you can stop wondering. The Spring Garden Road streetscape redesign is already funded. Council approved the funding along with the Argyle Street redesign back in 2016, which means there’s $10 million set aside to make something happen on Spring Garden Road. After planning staff process the feedback and report their recommended options, it will be up to council to decide what that something is.

All three presented options include the burying of overhead wires, which is a big part of the reason the project price tag is so high. From there the options start to diverge.

Functional plan Option 1 is the least dramatic, closest to status quo. As with the other options, sidewalks get widened and bump outs added at intersections, but this first option sees sidewalks (including bus stops) gain one to five metres less territory than the other options, mostly to leave room for on-street dedicated loading zones. The street, though reduced to two narrower, more defined travel lanes, remains a thoroughfare for vehicles, meaning drivers can use it to get from Queen through to South Park (though why anyone would choose this as a through route remains a mystery). This option also includes a single turn restriction, preventing drivers from turning left onto Queen Street northbound and delaying buses headed straight across to the stop at the Central Library. 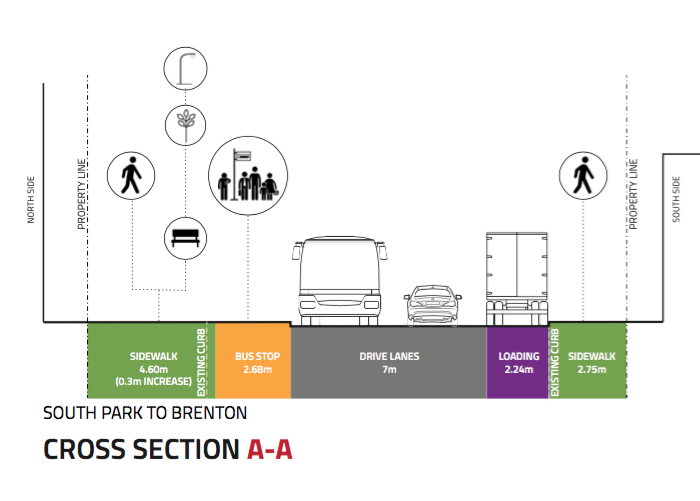 Option 2 is labeled “turn-restricted transit priority,” and effectively creates two transit-only stretches through the use of turn restrictions (no lefts) and through-traffic restrictions (right turns only) at peak hours. On-street dedicated loading zones are maintained in front of Park Lane and Lawton’s, so although sidewalks are widened by between two and five metres, the widening is still less ambitious than Option 3. 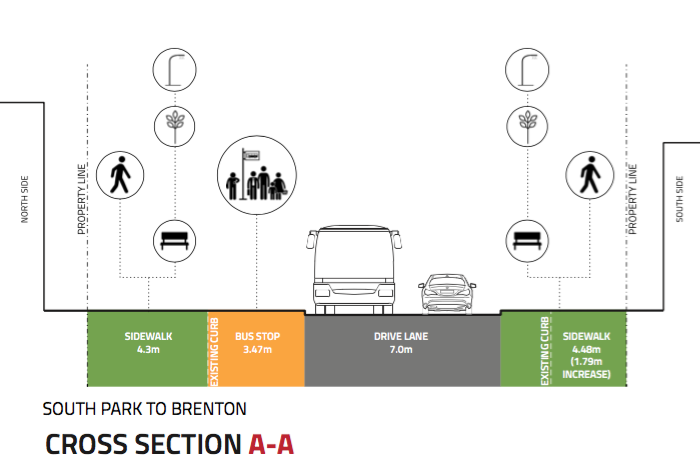 Option 3 takes traffic restrictions one step further and makes the westbound Spring Garden lane (heading toward South Park) transit-only during the day, and the two blocks between Dresden Row and Queen become transit-only in both directions at peak hours. This option sees the most sidewalk widening, with over five metres of widening along the whole corridor, and all loading moved off Spring Garden onto side streets. 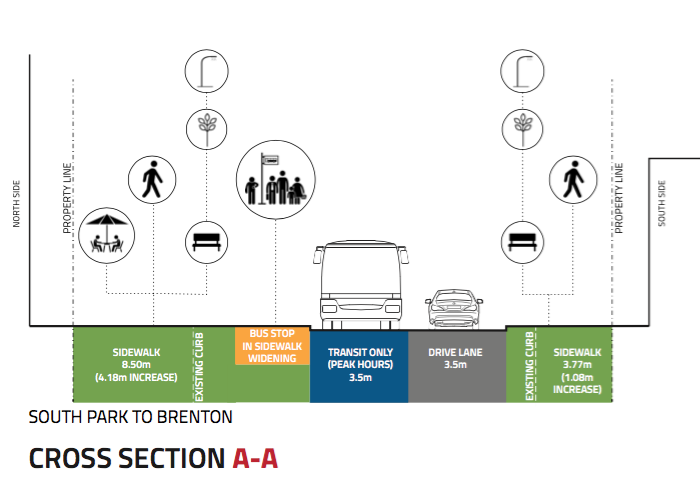 Although the public input to date on Spring Garden Road has been very focussed on improving the pedestrian experience, there will still be controversy coming out of these three options. I predict two main areas of focus. First, there’s the pedestrian space versus on-street loading space issue.

It’s reasonable to expect that businesses on the street will lobby hard to keep dedicated loading zones (Options 1 and 2), but here’s hoping they throw their energies into solving the logistical challenges of doing business on the city’s busiest pedestrian street, instead of fighting to take space away from pedestrians to make room for enormous trucks to park at midday and shred paper.

Of course loading is necessary in any commercial district. But a remake of Spring Garden Road with widened pedestrian zones has been in the making for over a decade. There’s been ample time for landlords to come up with solutions to make sure tenants get access to deliveries, be it through smaller scale transportation options from side streets or alternative access within buildings.

As a sort of add-on to the proposed options, city planners have also proposed creating a one-way couplet of side streets Birmingham and Dresden Row, which would increase the capacity for both parking and loading on those streets.

People walking or rolling have far outnumbered people in private vehicles on Spring Garden for years. We may have reached the day when even the merchants of Spring Garden realize that their street is too darn busy with potential customers to continue to serve as a loading zone. 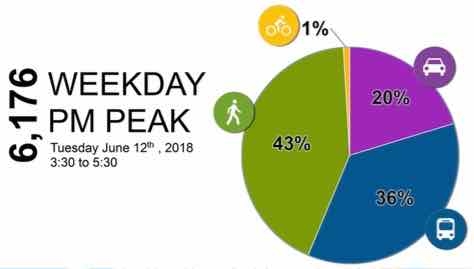 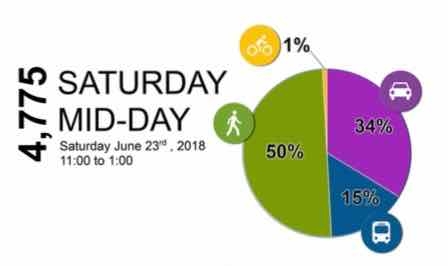 Snapshot of modal share on Spring Garden Road, based on person trips. Images from Halifax planning display panels available at Shape Your City.

The other controversial feature of these options is the proposed restrictions on vehicle access to make way for bus-only lanes. This might actually be less controversial than the recently installed transit lane on Gottingen Street, which displaces loading and parking at peak hours. The Spring Garden Road transit lanes do not displace loading or parked vehicles (sidewalk widening does that), but rather redirects moving vehicle traffic, at least the private kind, at peak hours or throughout the day. [Update: The definition of Spring Garden’s peak hours has yet to get precisely nailed down, but planner Elora Wilkinson told me that staff are working with the idea of 7am to 7pm for the proposed restrictions.]

I get that it seems radical, but Spring Garden is the perfect candidate to go transit- and pedestrian-only, at least in this section. The massive amounts of pedestrian traffic along Spring Garden Road already make it very difficult to get on and off the street in a vehicle, so you could argue that funneling drivers over to parallel east-west streets might ultimately save them some time. And with 80 per cent of people traveling by sustainable modes like active transportation or transit during the week, it makes sense to double down on making sure those modes are efficient, safe, and comfortable.

Then there are the 15 bus routes using the street, including the highest frequency and most popular route we have, the 1 Spring Garden. Although there are no numbers outlined in the presented options showing the potential time savings for the thousands of folks using those routes, it’s fair to say that Options 2 and 3 would make a positive impact on Halifax Transit’s on-time performance, and have benefits across the entire city.

The functional plans presented also include options for Spring Garden Road west of South Park Street and east of Queen Street, but since those sections do not have approved funding waiting in the wings, it’s less clear how likely the changes are to happen.

West of South Park Street, heading towards Summer Street and up to Robie Street, the main proposals are to create a boulevard median in order to tighten up traffic lanes, or else to use the space to widen sidewalks and add bump outs.

East of Queen Street, the proposals include an east-bound transit only lane stretching just past Brunswick Street, and either widening sidewalks or permit parking in front of the courthouse.

You can read more about the project and answer a survey expressing your opinion here.  [Quick tip for viewing the city’s pdfs, which are designed to be printed on large panels and displayed side to side: view them through a pdf viewer in 2-page mode, and scroll sideways as you read.]

Once council approves a functional plan option sometime this winter, planning contractor Ekistics will begin working on detailed design options, and planning staff will be back consulting with the public, this time with street level detailed design drawings.