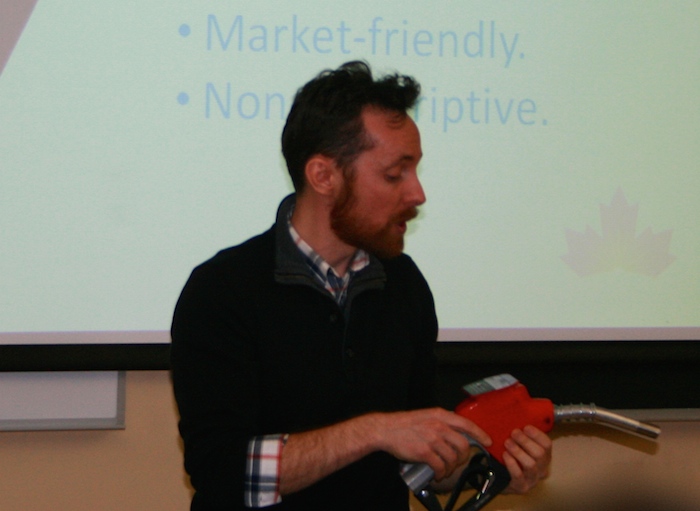 What is human nature? In the 21st century, the concept has calcified around a figure of the human being as a rational, advantage-seeking individual, a figure conveniently suited to a capitalist free market economy. Yet what many people try to assert as self-evident is starting to show cracks.

Robert Shirkey, a Toronto-based lawyer and founder of the not-for-profit Our Horizon, wants to exploit these cracks, starting in the most prosaic of locations. Gas stations, he says, can be the place to launch a new debate about human nature.

Shirkey suggested that the warnings would resemble those now featured prominently on cigarette packages. Instead of a diseased lung, he said, climate change warnings would feature, for instance, pictures of caribou, accompanied by the International Panel on Climate Change’s warning that 30 percent of species could be put at risk of extinction by climate change.

In this way, he said, the warnings would perform the same function as those on cigarettes, by warning people of the future consequences of their actions.

Those who think this method is ineffective, he said, need look no further than the vociferous opposition of tobacco companies to visual warnings for evidence that there might be something to it.

More importantly, he said, putting warnings on gas pumps provides some of the feedback that’s missing when we make decisions that could exacerbate a changing climate. By highlighting the link between an individual tank of gas and a global problem like climate change, he suggested, people are more likely to recognize their role in the problem.

There are other ways to quantitatively enforce responsibility for emissions, says Shirkey, most prominently a carbon tax. But while Shirkey emphasized he supports those measures too, he said that they’d be ineffective on their own, especially for a product whose demand is inelastic, such as gasoline.

“Policy reinforces worldview,” he said, noting that a quantitative approach to climate change maintains a notion of human beings as essentially economic actors.

A New Idea of Human Nature

Addressing climate change, Shirkey said, requires moving to a new idea of human nature, as outlined by Adam Smith. Less the invisible hand Adam Smith beloved by free market supporters, he suggested, and more the Smith of the Theory of Moral Sentiments, for whom empathy, kindness and self-restraint play an important role.

This relates to warnings on gas pumps, said Shirkey, because by introducing a new element into the automatic action of filling up a tank, you offer people the chance to thinking about the impact of their actions on others.

Yet while this individual behavioural change is important, the goal is more to “create more space for government to respond,” he said.

With more people changing the behavior in ways like taking public transit, governments are more likely to respond to calls to improve transit infrastructure. “You’re giving the politician more political licence to implement solutions to address this problem.”

This could be applied to the private sector as well, he said. Fuel efficiency has improved very little, at least for some cars, since the first Model T. Why is this, he asked?

“Because there’s a market for the product.”

While addressing the policies that promote the extraction of oil, especially from unconventional sources like the tar sands, is important, he said, you could stop oil production in Alberta tomorrow and there would still be demand for fuel.

“The elephant in the room is us,” he said, adding that “change comes from discomfort not complacency.”

Addressing the global challenge of climate change, said Shirkey, is best achieved at the municipal level, at least as far as gas pumps go. He highlighted two precedents that he said gives cities that authority.

The first of these is the challenge tobacco companies made to the mandatory visual warnings on cigarettes. The warnings, they said, violated their charter right to freedom of expression. The Supreme Court ultimately upheld the warnings, so long as they were attributed to the government of Canada and therefore not compelled speech. Anticipating the free speech argument, said Shirkey, municipalities could attribute climate change warnings to a municipal bylaw.

Shirkey also pointed to the bylaw in Ontario municipalities requiring restaurants to display the results of their most recent health inspection. The fact that a municipal bylaw – upheld by the Ontario Court of Appeal – supports the power of a city to require notices on private property about the health risks of a product, he said, could be used a precedent for gas pump warnings.

On January 26, the municipality of West Vancouver passed a resolution supporting legislation of mandatory warning labels on gas pump handles. While not law, the resolution will be advanced for consideration at the Canadian Federation of Municipalities and Union of British Columbian Municipalities conventions in the summer, where it could be adopted as the official policy position of municipalities across the country.

That resolution began with the suggestion of a 16-year-old girl, said Shirkey, pointing to the students in the room. For municipalities leery of putting themselves at risk of legal challenge, he said, citizens could suggest supporting West Vancouver’s resolution, which would create a new policy position with little political risk.

The labels have potential for bipartisan support, said Shirkey. In some ways, they’re facilitating rational economic choice by “providing information at the point of purchase.” Yet Shirkey contended the question of whether or not to pursue this avenue is more existential than strategic.

“If we as a species can’t even put a simple little sticker on a pump,” he said, “we’re screwed.”