You are here: Home / City Hall / In the midst of a crisis over policing, Halifax’s police commission has cancelled its scheduled meetings and is declining to accept public input

In the midst of sustained protests about policing, and facing increasing questioning about their role and responsibilities, the Board of Police Commissioners cancelled their meeting planned for today.

Members of the Board indicated to Harry Critchley that the reason for the cancellation was that not everybody on the Board was set up to use Microsoft Teams.

This mirrors the reasoning given by the Budget Committee on why it could not allow public input on last Tuesday’s budget decision: staff were unable to figure out how to do so on Microsoft Teams.

A beginner’s guide to Microsoft Teams is available at this link.

Municipal politicians have faced intense scrutiny in the last couple of weeks around their role in enabling the arming and funding of police. On Tuesday last week, city councillors voted to cancel the armed vehicle, with many members of Council changing their previous vote and expressing remorse. Tuesday’s vote followed a public campaign against the purchase of the tank. 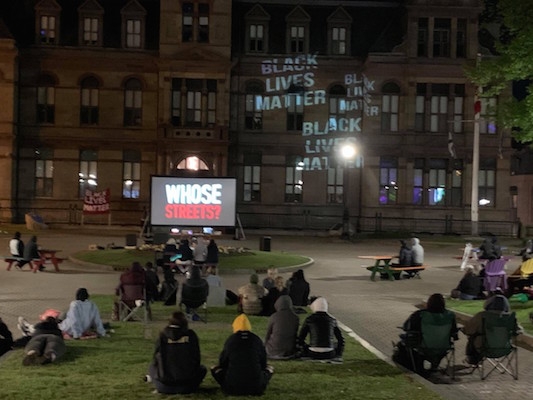 As the movement to defund the police grows across Canada and is featured in mainstream media, councils and boards that previously operated relatively unnoticed are finding the public taking a sudden interest in their activities. Formerly dry-seeming topics like budgeting and Acts are now at the centre of an international conversation about Black Lives.

The most charitable reading is that at this moment when democratic accountability by these bodies is more important than ever, Halifax’s councillors and commissioners are woefully unprepared to rise to the occasion. If technological inadequacy is the true reason that public input is being silenced at this crucial time, then that is a sad commentary of the ability of the governance bodies in this city to handle these life or death issues.

It is perhaps more likely that Microsoft Teams is not the culprit, but a convenient excuse. Desmond Cole, the author of the current number one bestselling book in Canada, The Skin We’re In, which details the 2017 struggles against policing and state violence, notes that as pressure on these bodies increase they typically respond by silencing public dissent. Cole, who was himself arrested at a police board meeting, cautions:

We saw everything from an increase of armed officers inside the board rooms to the switching off of microphones of speakers who broke decorum or spoke forcefully against the board. In one case, in order to save a police in schools program, police made a physical barricade in front of the door, so that dozens of people who were attending —  including speakers  — were unable to enter for hours.

In defending completely unaccountable police forces, police boards will go to really shocking and disgraceful lengths to avoid accountability themselves.

Cole notes that the increased security of board meetings in response to activists mirrors the increased militarization and arming of police.

A letter written from the East Coast Prison Justice Society and Women’s Wellness Within (I am a member of both boards) to the Board of Police Commissioners identifies several areas where democratic representation at the board can be improved. As I have previously written about, access to the board for public submissions can be near impossible, and the board has no real mechanisms for public feedback.

The letter also indicates that:

[A] 2016 self-study of the Board conducted by former Commissioners Fred Honsberger and Mike Moreash concluded that “the Halifax Board of Police Commissioners has failed to meet its legislated governance requirements under the 2006 Police Act for the past 10 years,” a failure which the reviewers attributed to “longstanding systemic flaws in the framework and support network of the Board.”

Among the concerns raised by advocates are that, unlike what is common in other jurisdictions, none of the policies governing the police are publicly available. For example, the Toronto Police Service — no model of transparency or accountability — posts its procedures online here.

While procedures clearly do not prevent police from harming and killing people, they at least provide a minimum mechanism for holding the police accountable to the failure of their own policies. In February, for example, the Halifax Regional Police beat a 15-year-old Black boy outside Bedford Place Mall. As far as we know, there are no policies for the police governing interactions with minors.

Police commissioners do have access to all these policies, but they have yet to invoke any of them in calling the police to account. I commented in February about how, in preparing their self-assessments, it was suggested that it would be worth asking if everyone had “read the manual.” Proposing policy — a key responsibility of the Board — seems a long way off. The 2016 self-assessment reveals that to that point, the Board had made no policy recommendations at all.

Martha Paynter, the Chair of Women’s Wellness Within, recounts the difficulties her organization has experienced in obtaining the use of force policies for the Halifax Regional Police:

We met with Chief Dan Kinsella and other officers because of our concerns after Santina Rao’s assault. We were particularly concerned that they did not understand the gender implications of this kind of arrest in front of children.

When we met with them, they refused to provide us a copy of any of their policies. We were caught in a kind of loop where they said they welcomed our feedback on their policies, but we were not permitted to actually see said policies.

We are disturbed by the total lack of transparency by this public so-called service, and demand full transparency so that the public can understand what drives police actions.

The daily press conferences during COVID-19 may have created the illusion that democratic engagement with government was not affected by the pandemic, but the opposite has been the case. Little attention has been paid to the implications of what happens when courts are no longer open and hearings are not accessible to public and journalists, or when meetings by council or the police board go online.

The suppression of public input — and refusal to meet during a period where policing is in crisis — reminds us of the dangers we face when we do not have access to those who purport to democratic legitimacy when governing. If they cannot meet that basic democratic responsibility, then it is our duty to hold them to account in those ringing revolutionary words: by any means necessary.