You are here: Home / City Hall / How a ditch and a draft bylaw are threatening a growing meadow in Hammonds Plains 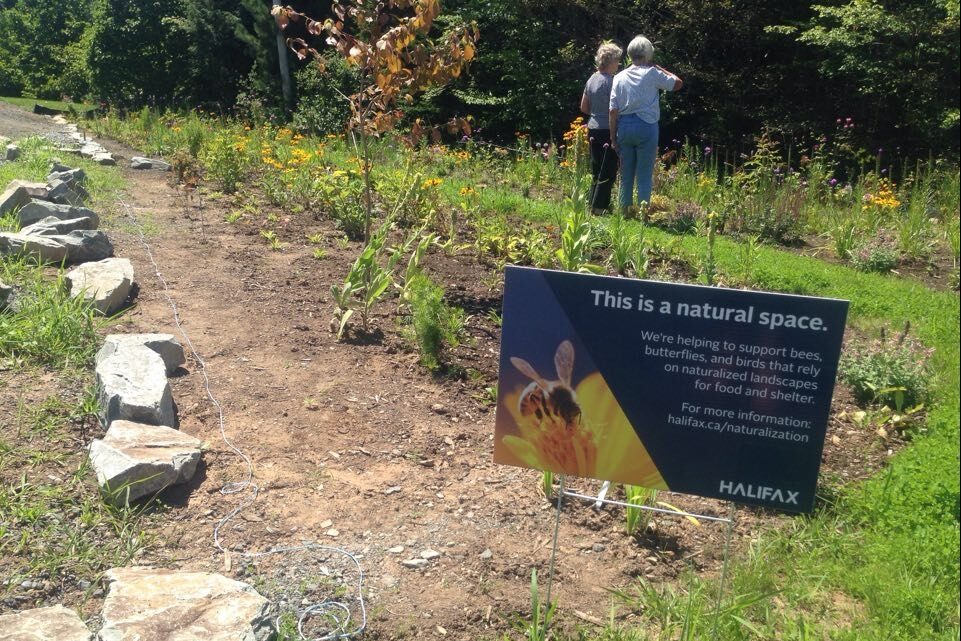 The meadow garden in Kingswood was created by residents, but there are a few issues around its rock wall and a nearby ditch. — Photo: Suzanne Rent

A meadow garden project on a municipally-owned right-of-way in Hammonds Plains, planted by residents in Kingswood subdivision, has run into some problems because of municipal rules.

The meadow garden — started by Donna and Duff Evers, who live in Kingswood — is located on a quarter-acre plot of land the Evers actually mowed for about 20 years. The garden is listed as one of three spaces in the city that the municipality slated for naturalized strategy initiatives. The other spaces are at Leighton Dillman Park in the Dartmouth Common and Merv Sullivan Park in the north end of Halifax.

But now there are concerns about some stone hardscaping in the garden and what future repairs to a culvert and ditch next to the garden could do to the meadow.

Donna Evers says she and Duff started thinking about the project last fall.

“When we wore out the third lawn mower, we thought we could do something else,” Evers says. “And we’re old and my husband couldn’t do it anymore. We thought maybe we could plant a pollinator meadow. I ran it by Matt Whitman and he said, ‘Sure, unofficially, I don’t think it will be a problem.’ Then COVID happened and we thought maybe we better put it on hold. Then we thought it would be a nice project to do during COVID.”

This spring, the municipality took up the old sod and put down new topsoil. She says they put in a fill barrier to keep soil from washing into the drainage ditch that runs alongside the garden plot and serves houses on the other side of the road. Evers says they asked what would happen if that culvert needed to be replaced. She says Halifax Water came out to the site and they were told a machine would have to come in and work along six feet of the meadow, scooping out the debris. By the time they discovered this might need to be done in the future, at least half of the plants in the garden were planted. Evers says Halifax Water said they’d work something out, suggesting the ditch could be filled in, dug out by hand, or a smaller machine could be used to do the work.

“The only reply we got was, ‘Maybe it will never need to be done,’” Evers says. 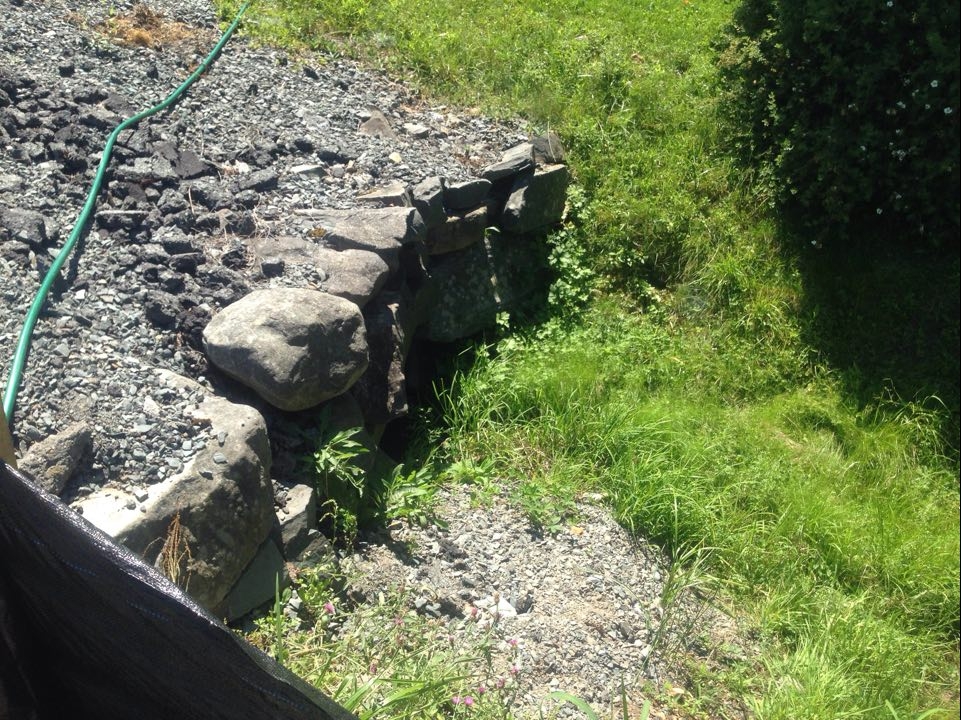 This culvert is next to the meadow garden and connected to a ditch nearby. Photo: Suzanne Rent

In just weeks, the meadow garden has blossomed with perennials and other pollinators. While the Evers contributed financially to the garden and use their own water, Donna says this is not just a project created by them. They received donations of 2,000 plants from across the province from greenhouses and private donations. Kids from the neighbourhood have planted their own flowers. Master gardeners are dropping off plants, too, and the space could be used for educational sessions.

“Plants were dropped off in my driveway. I’d get up and there were bags and boxes of plants,” Evers says. “As wonderful as the Kingswood residents think it is, it’s been supported provincially. I owe a debt of labour, if that’s all I can do, and I’d like generosity extended on the issues. I’m grateful for HRM saying we could do it and the prep work they did, for sure.”

Evers says her long-term goal is to have this garden functioning so when people who want to create a pollinator garden at their own homes they can get plants and seed from this meadow garden.

Between a rock and a hard place

Then the Evers started encountering issues. They installed a rock wall along the edge of the garden to prevent erosion. The wall is actually just one line of flat rocks on the border of the garden and several feet from the road. Evers says when the plants get large enough, they’ll prevent erosion on their own.

But Evers says she learned the rock wall stands in opposition to some new draft guidelines governing boulevard gardens.

Halifax regional council voted in May to direct staff to amend the bylaw governing gardening in boulevards — defined as “the area between the curb and the sidewalk, typically planted with grass.” One of the new guidelines says, “No hardscaping, rocks, or stone mulch is permitted to be placed in the boulevard.”

“This is a meadow,” Evers says. “It’s not a boulevard. It’s draft legislation. And I don’t think it’s fair to have draft legislation cover an urban description in the suburbs. I tried and tried to get HRM officials and the people we were working with, and our councillor to look at what we’re doing, understand it, and see our reasoning, and make a compromise.”

The meadow garden got more attention on Tuesday, when gardening expert and author Niki Jabbour tweeted out photos and details of the issues the Evers were facing with the rules around the garden. Jabbour has known the Evers for about 12 years and has written about their home garden in articles and her books. She says Donna has been working by the books on the project.

Jabbour says fixing the ditch and culvert could mean significant damage to the meadow.

“It’s a new garden but it’s already full,” Jabbour says. “In a year it’s going to be lush and beautiful. If they do decide to take away the six-plus feet with a tractor after all of this has been done, it would effectively destroy the garden.”

As for the rock wall, Jabbour says, it’s not an issue because the garden is on the side of the road. “It doesn’t matter if a perennial gets a metre and a half tall,” Jabbour says. “It’s not blocking traffic. There has to be a little bit of common sense with these policies, as well.”

The Examiner contacted the municipality about the issues with the meadow garden, the ditch, and the rock wall. “Work to the nearby ditch may impact a small area of the site, however, staff are working with residents to keep the naturalized area functioning while still allowing for future maintenance to nearby infrastructure,” says HRM spokesperson Maggie-Jane Spray.

As for that stone wall, Spray says staff are looking at options, including the addition of an eight-inch mulch berm to replace the stone.

“Residents are concerned about stones getting kicked into the area from the road and possible erosion, so they asked staff if they could install rock edging to mitigate these concerns,” Spray says. “In accordance with the Boulevard Gardening staff report, staff do not want to encourage people to install any hardscaping, rocks or stone mulch as this would be contrary to what is being considered for boulevard gardening rules, which is why the request for rock edging was denied.”

The Examiner also contacted Whitman, who says he’s working with the residents on this project. “I’m on their side,” Whitman says via text. “I’m in favour of the meadow. It’s ridiculous to treat it like it’s a boulevard on Young Avenue or Connaught Avenue. It’s a suburban ditch that residents have been servicing for the municipality for 25 years. It provides a lot of joy to Kingswood residents and beyond.” 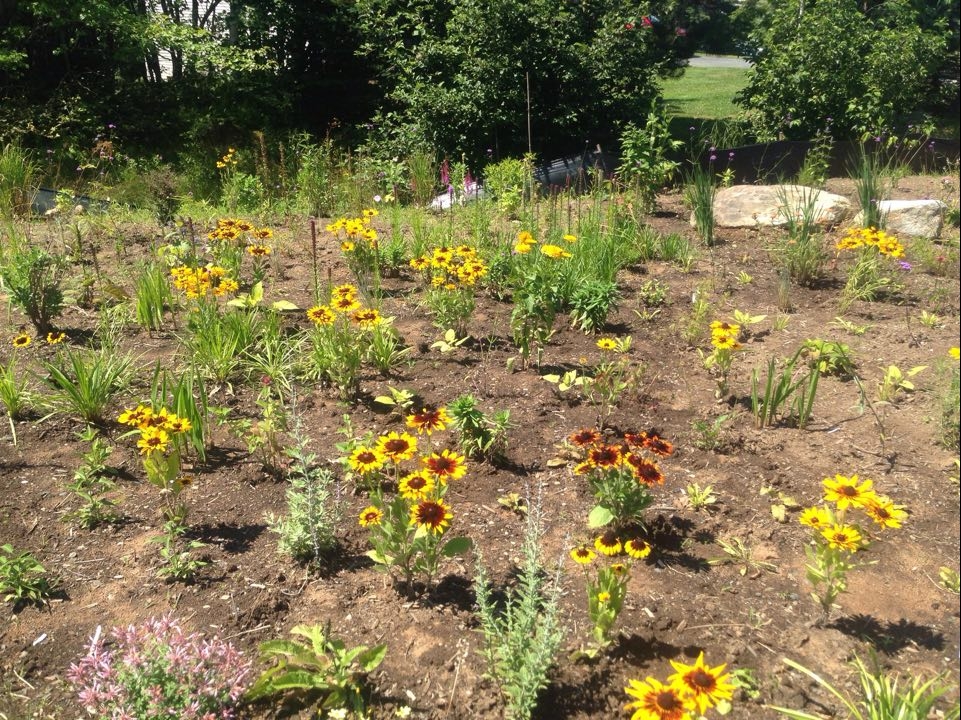 The meadow garden at Sime Court in Kingswood is filled with perennials that are attracting bees and monarch butterflies. Photo: Suzanne Rent

Jabbour says she was contacted by Mayor Mike Savage’s office on Thursday to say they’d find a solution. She says these meadow gardens are popular in a lot of cities because they attract pollinators, plus other insects like bees. The gardens also attract birds, providing them with a habitat and food source. “We should see these [meadows] everywhere,” Jabbour says. “I know places in the U.K. and Europe are implementing policies around meadow gardens in their urban areas and I think it’s fantastic. I’d love to see Halifax on the cutting-edge of that in Canada. It’s not been widely done yet.”

Jabbour says these gardens have a larger purpose, too.

“I think the biggest thing, besides the environment, which got pushed to the back burner during the pandemic, but this has brought the community together,” says Jabbour. “Donna said they have talked to more of their neighbours in the past five, six weeks than they have in the past 25 years.”

“[The Evers are] putting their hearts and souls into this garden and it’s not for themselves; it’s for the community. I want to see more of these spaces for pollinators and a wider understanding of pollinators and their habitat.”

Evers says she understands this is the first project of its kind, so everyone is working out the kinks. On Friday, Whitman, staff from the municipality, and Jabbour will be touring the garden with the Evers. She says she has suggestions on how to make it all work.

“If I could have the sun, the moon, and the stars, I would ask for a culvert to be installed the entire length of this ditch, soil filled in to bring it up to grade level, and I would have three more feet to plant,” Evers says. “And it would never be a problem again. I would like to be able to leave the row stones in. Honestly, my biggest concern is the ditch because it’s been left hanging. It could at any time get a new culvert or need to be dredged or need to be done and it would do damage to the meadow. I want the powers that be to make it right.”