You are here: Home / City Hall / Heads Up Halifax sends the wrong message to the wrong audience

The “Heads Up” crosswalk safety campaign is back.

Though the creators claim that it’s aimed at both drivers and pedestrians who are distracted by their phones, Heads Up sure sounds to me like it’s squarely focussed on pedestrians.

Maybe it’s because “heads up!” seems like absurdly little to ask of someone operating a motor vehicle. I mean, a driver’s head should always, at a minimum, be up. Whereas pedestrians can walk great stretches of sidewalk safely while staring at a book or a phone or the gum on the sidewalk, so that when they come to an intersection, it’s logical to think “heads up!”

Sure, it’s unstated, but it’s clear to me: the Heads Up message targets pedestrians.

It’s almost as if Halifax has made a conscious decision to ignore the data when designing their campaign. We have hard numbers on pedestrian safety. Check out these vehicle-pedestrian collision statistics tracked by the police.

There’s a striking difference in the numbers of tickets issued to pedestrians and drivers for the past two years (previous data was not reported). Curiously, the breakdown of SOTs issued to drivers and pedestrians showing this huge gap is NOT included in a similar table on Halifax’s crosswalk safety facts webpage.

This data is telling us something: We have a problem with drivers not following the rules.

And in some cases, it seems, it’s because drivers don’t even know the rules.

To help justify the Heads Up campaign, the city contracted Corporate Research Associates to give online surveys to 402 people about their perception of safety on our streets. For the most part, these public perception stats seem rather useless. The slight differences between pre-campaign and post-campaign surveys could be more than accounted for by the unknown margin of error in the online survey stats.

That said, the results of one question jump out from the pre-campaign survey. Straying from the “personal perceptions of safety” theme of the survey, one question was actually a knowledge test.

When asked, “As far as you know, where do pedestrians have the right of way?”, only 43 per cent of the people surveyed answered in an unmarked crosswalk. 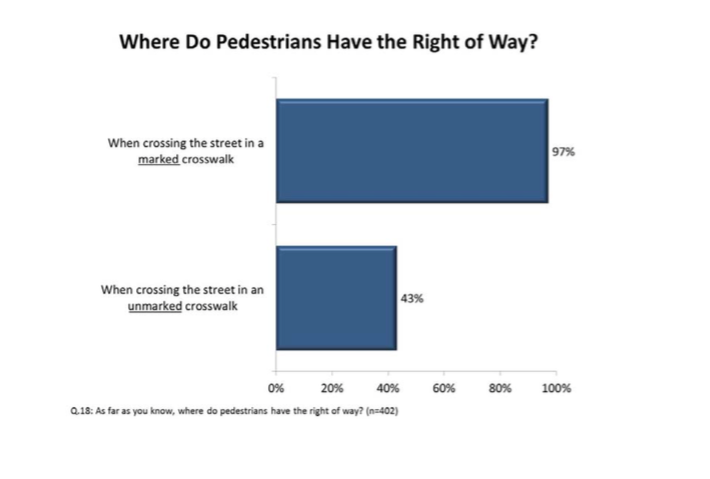 A graph from the final report on a pre-campaign online survey of 402 Halifax residents, 63 per cent of whom said they drive daily.

Unfortunately, the same question seems to have been dropped from the post-campaign survey. And since I haven’t seen any Heads Up ads aimed at clearing up the mystery around what constitutes a crosswalk, I’m guessing that ignorance still prevails on this topic.

Last week I attended an open house for Share the Road NS, a project of the Dalhousie Transportation Collaboratory (DalTRAC). In 2013, after researching more than 70 share-the-road campaigns across the world, and after rounds of community consultations across Nova Scotia, they came up with the Thumbs Up campaign. 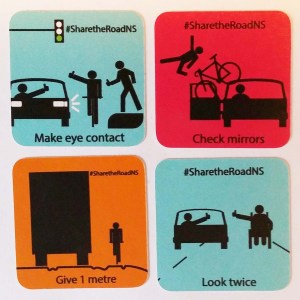 Just of few of the decals created as part of the Thumbs Up campaign, encouraging people to make eye contact, check mirrors, give 1 metre clearance to bikes, and look twice.

The Thumbs Up campaign is “open source,” meaning materials are available across Nova Scotia and beyond, and are able to be customized. The region of Waterloo has adopted a version of Thumbs Up strictly geared towards drivers and cyclists getting along.

Thumbs Up is a positive, practical education campaign. It reminds us of some key points about how streets should legally function, and it encourages communication and friendliness among road users.

It’s a shame that Halifax, when presented with the opportunity to put some of their marketing budget behind Thumbs Up, opted for the more divisive, less helpful Heads Up instead.

Of course, education campaigns like Heads Up and Thumbs Up both seem a little lacklustre when compared to the public education components of New York City’s Vision Zero program.

Vision Zero began in Sweden in 1997, when the goal of zero deaths and serious injuries from traffic accidents became national policy. In New York City, pedestrian deaths have been reduced dramatically in the two years since it was adopted.

NYC Vision Zero ads focus on specific and common situations where people can get killed or injured. Not surprisingly, that means the focus is on driver behaviour far more than pedestrian. 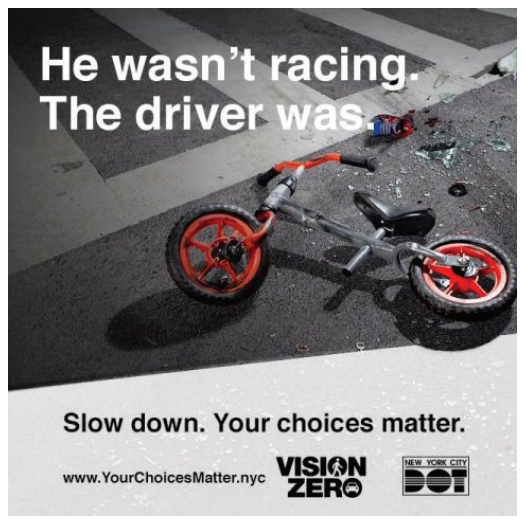 A print ad from NYC’s Vision Zero campaign, and a far cry from Heads Up!

But these ads are a drop in the bucket of what New York’s Vision Zero is about. Instead of just asking people to make fewer mistakes (because let’s face it, even the most egregious distracted driving isn’t meant to hurt someone) Vision Zero espouses the idea that we need to design and build streets to be safer for humans.

Here’s just a few of the things New York has done since 2013:

Read more about the long list of initiatives in NYC’s year two report.

Our provincial government is in the process of hiking pedestrian fines in an effort to “level the playing field between drivers and pedestrians.” (I mean really, how do you do that without putting all the pedestrians in cars, or getting all the drivers out of cars?)

Our municipal government is continuing with a campaign that perpetuates the incorrect idea that pedestrian behaviour is the biggest problems on our streets.

While other jurisdictions actually take a stab at saving lives, it seems Halifax and Nova Scotia are focussed on not offending the 78 per cent of Nova Scotians who say their primary transportation mode is driving.  Campaigns like Heads Up are a way that our bureaucrats and politicians can appear to be doing something about traffic deaths and injuries, while not stirring up the ire of the drivers out there who might feel threatened by a realistic campaign.

While it may be true that “Crosswalk safety is everyone’s duty,” it is not true that everyone is equally responsible for traffic deaths and injuries in Halifax.  And continuing to reinforce this false message will undoubtably end up costing more injuries and lives.