You are here: Home / City Hall / Halifax’s recast COVID-19 budget is $85 million lighter. Here’s what staff want to cut, including fire and police 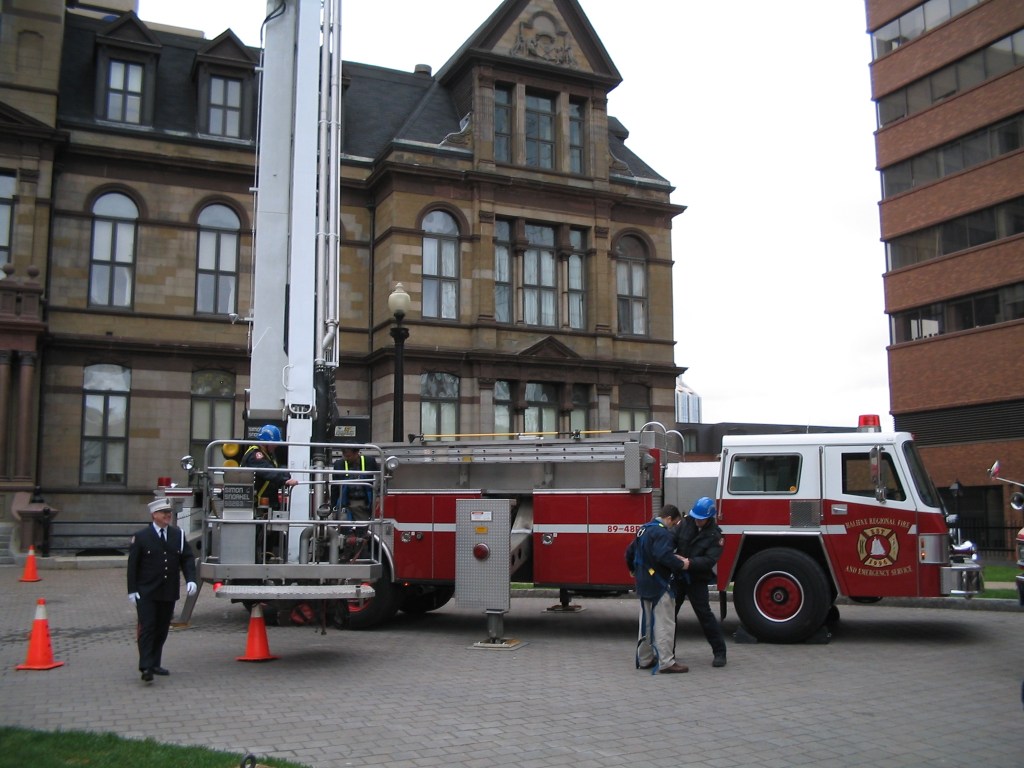 A Halifax Regional Fire and Emergency truck at an event in front of Halifax City Hall in 2004. — flickr user William Matheson

The permanent financial hit to Halifax from COVID-19 this year is projected to be $85.4 million, and some high-profile services and projects are being cut or delayed to close the budget gap.

Regional council’s budget committee meets Tuesday afternoon to begin the process of debating and rebuilding the city’s budget. It was ready to approve the original one, crafted over months, in late March when the province went into a state of emergency due to the global pandemic.

The municipality has had to shut down some services, reduce others, defer property tax bills, and lay off nearly 1,500 employees.

“Currently HRM has a serious financial deficiency in its Budget and in its cash flow position,” financial policy and planning manager Bruce Fisher and senior financial consultant Tyler Higgins wrote in a staff report to the budget committee, released Friday evening.

Fisher and Higgins explain that COVID-19 has two kinds of impacts on the municipality’s finances: cash flow and real revenue loss.

On the cash flow side, the worst case scenario is $188 million. That’s residential and commercial property tax money that the municipality believes it will get eventually, just not on time.

The plan is to use the provincial government’s new loan program for municipalities, through the Nova Scotia Municipal Finance Corporation, to fill that gap. But debt charges from that program, including 1.1% interest, will add up to $30 million, adding to the other financial impact for the city — lost revenue.

That’s money that will never be recouped, and has to be made up from budget cuts.

Halifax is projected to lose $44 million in revenue. Nearly half, $20 million, is lost transit fares. The remainder is due to lower deed transfer tax from a cooler real estate market, reduced interest revenues, recreation fees, and fines. Another $10 million is accounted for as a “valuation allowance,” lost tax money.

“In total the revised budget deficiency, without any corrective actions, is $85 (million),” Fisher and Higgins wrote.

Finance staff spent last month putting together what they’re calling a “recast” budget. They started with the budget they had ready for council’s approval, including the items from the budget adjustment list, or parking lot.

They operated under the following assumptions: “that the economy would be shut until June, that there would be no spring or summer recreation programming and that buses and ferries would not be at pre COVID-19 capacity in fiscal 2020/21.

“Staff also included a 28% decline in gas and diesel prices. In addition to budget assumptions HRM took steps to lay off casual, term and temporary staff that could not work from home and notified other employees that they would not be called back for seasonal work. This amounted to 1,480 layoffs.”

What’s proposed to be cut:

Halifax Regional Fire and Emergency’s operating budget is looking at a cut of about $5.4 million, down to $69.1 million, a 7.2% cut. Included in that money is $1 million from reducing overtime and closing Station 11 in Sackville and moving staff from there to Sheet Harbour. There’s $2.3 million from an increased vacancy target and hiring freeze. There’s also $200,000 for uniforms, $290,000 for training materials, $770,000 from a volunteer recognition program, and more.

There are also cuts to the capital budget for the fire service: $5.6 million from the fire station replacement fund (for new Stations 8 and 9 in Bedford and Sackville, respectively); $665,000 earmarked for a new “intelligent” dispatching system, described in previous budget documents as “reducing response times and enhancing public safety;” and $543,000 for enhanced records management system that would’ve been used to “improve efficiency and quality of the information tracked and managed.”

Halifax Regional Police are looking at a cut of $5.5 million, down to about $84.3 million, a 6.1% cut. Included in the savings is nearly $1.7 million from keeping 18 positions vacant. Reductions in overtime and court time of 25% each total another $1 million. Unlike the fire budget, councillors can’t pick and choose items from the police budget. They only approve or deny the total number. The city’s board of police commissioners meets Monday to debate the proposed cuts.

Halifax Transit’s budget is actually higher by almost $8 million or 26.2% , now totalling $38.5 million. That’s because the cuts proposed don’t offset the lost revenue. Transit hasn’t collected fares on buses or ferries since mid-March. But there are still cuts. The service proposes to save $3.7 million by not filling vacant positions; $1.1 million by reducing equipment and building expenses; and another $1 million in reduced vehicle expenses. Fuel usage and cost are also budgeted lower by $3.4 million.

On the project side, Halifax Transit is proposing to delay this year’s implementation of the Moving Forward Together Plan — the five-year route transformation project approved by council in late 2016. The savings to the operating budget amount to about $1 million. From the capital budget, staff removed $300,000 for a new West Bedford Park & Ride and $50,000 for the design of a new Wrights Cove terminal, to be located off Windmill Road in Burnside. There’s also a cut of $2.9 million carried over from fiscal 2019-2020 for a new or expanded transit centre.

Halifax Public Libraries have been closed since March, and revenues are projected to be down about $500,000 from the original budget. The lost revenue is offset from cuts, however, and the budget is lower by almost $1.2 million, or 5.3%, down to $21.2 million. Like other departments, the largest cut, $800,000, comes from vacancy management. On the capital side, $250,000 budgeted for planning around a replacement for the Bedford Library has been cut.

The most notable of the capital budget cuts is the Cogswell Interchange redevelopment, cut by nearly $26.3 million down to just $750,000. That project was supposed to ramp up this year, with demolition already delayed before the pandemic hit.

The park land acquisition fund, used to purchase land to create new parks like the long-promised Blue Mountain-Birch Cove Lakes, has been cut by an additional $400,000 to just $100,000. In fiscal 2019-2020, that budget was $7 million, and environmentalists were already concerned about the reduction.