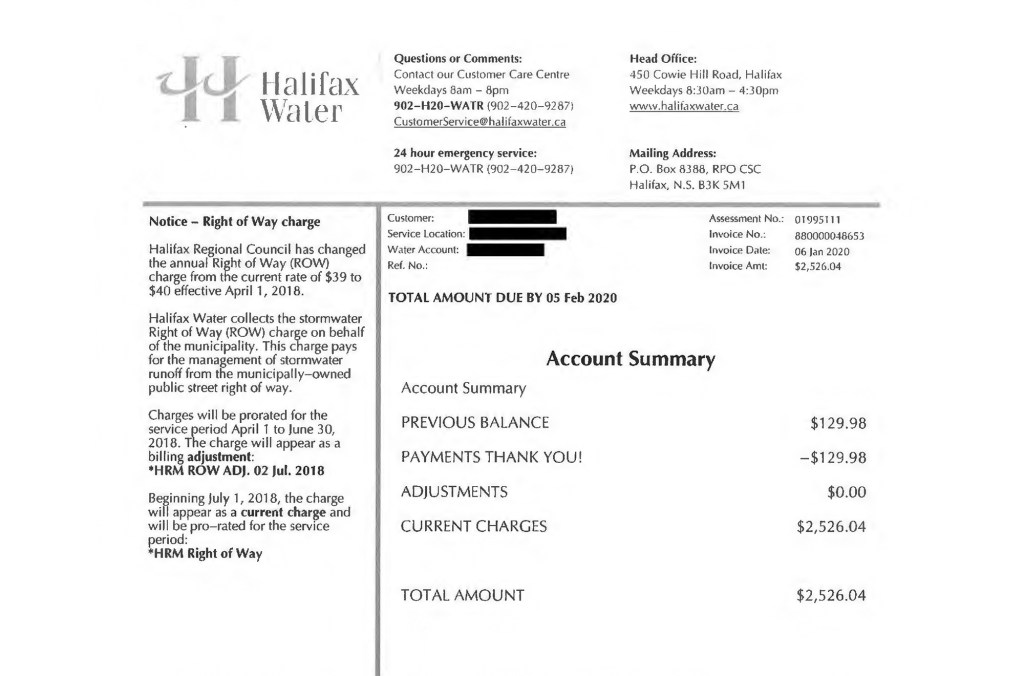 A Halifax woman is vowing to continue fighting an exorbitant water bill after losing an appeal before the Nova Scotia Utility and Review Board (UARB).

In a written decision last week, the UARB ruled Halifax Water had followed its regulations when it billed Allie Fineberg $2,526.04, alleging she used 18,000 litres of water per day for seven weeks. That’s more than 100 times her typical consumption, enough to fill a four-foot deep pool 15 feet in diameter every day.

“To put this daily average use in context … the Board calculates that if your outdoor faucet were left fully open, it would take nearly 4 hours for 18,000 litres of water to flow through your water meter,” board member Stephen McGrath wrote in the decision, addressed to Fineberg.

“Your measured water consumption spiked during this period for no apparent reason. The evidence provided to the Board in this proceeding does not identify a clear reason for your water consumption to have suddenly increased and then suddenly stopped.”

Fineberg, the owner of clothing store Allie’s Boutique, lives alone and doesn’t own a dishwasher or even a washing machine. She got the $2,500 bill, covering 90 days of water usage, in January 2020. A month earlier, in December 2019, the utility notified her of a spike in her water consumption.

Typically, Fineberg uses a little more than 100 litres per day and her bill is well under $200. For seven weeks, from the end of October to mid-December, Halifax Water’s meter indicated she was using 18,000 litres per day. The day after a meter read on Dec. 13, 2019, Fineberg’s usage dropped back down to normal rates.

Fineberg hired multiple plumbers, none of whom could find a leak or any explanation for the spike, let alone for the consumption returning to normal on its own.

“In my professional opinion, I do not think 10,000 litres a day of water is being used on these premises, or even close,” wrote one plumber. 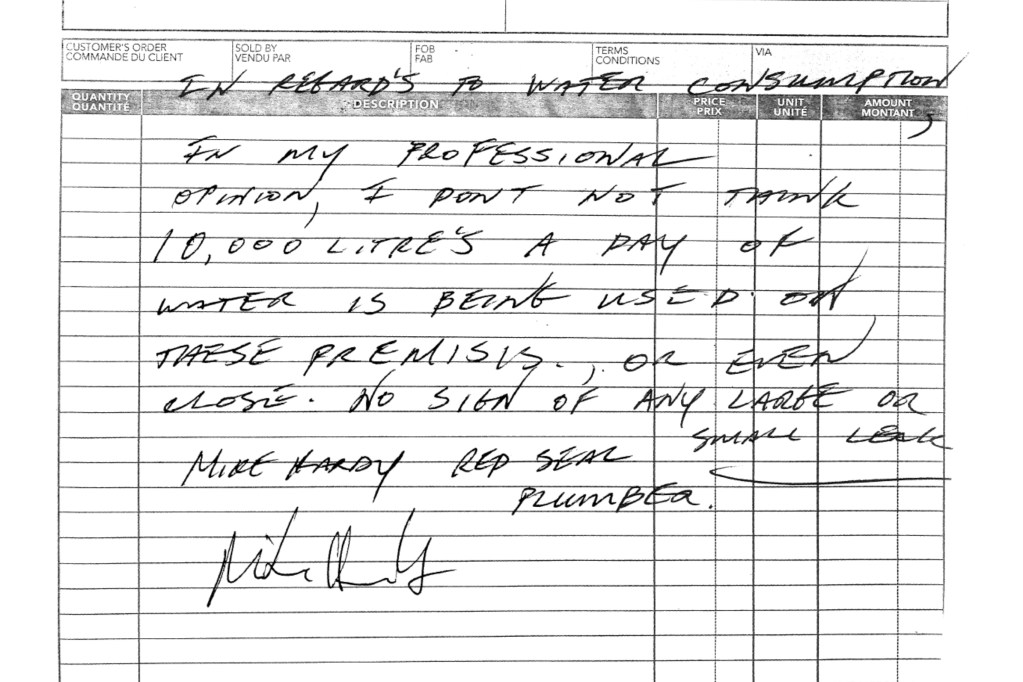 A plumber told Fineberg he didn’t think 10,000 litres of water could’ve been used daily on the property, “or even close.” — Screenshot: Allie Fineberg/UARB

Fineberg complained to Halifax Water and the utility tested its meter, finding it was accurate. The utility’s dispute resolution officer ordered her to pay the bill, albeit in installments, giving her 30 days to appeal the decision.

Fineberg appealed the decision to the UARB on June 2, after the 30 days, but as the Halifax Examiner reported in June, the UARB agreed to hear the appeal anyway, based on the “extraordinarily high” bill.

The UARB conducted a paper hearing, with some disputed facts getting sorted out. For instance, the earlier decision allowing the appeal pegged the alleged water usage at less than 10,000 litres per day. Evidence provided shows the average to be 18,000 litres per day.

Fineberg had also stated before that her new “Advanced Metering Infrastructure” water meter, also known as a smart meter, was installed in October 2019, just weeks before the usage spike. But Halifax Water was able to prove it had in fact been installed a year before, in October 2018.

On Jan. 4, the UARB released its decision, ruling that Halifax Water followed its regulations in billing Fineberg for the water. Board member McGrath wrote:

From the evidence before it, the Board cannot conclude that your water usage was erroneously measured or billed. In many cases in the past the Board has dismissed complaints about the overbilling of water rates based on the accuracy of the meter and the design of the meters that requires water to physically flow through them to record usage. Although this case is unusual because the measured consumption is so high, the Board declines to infer from the circumstances that the probable cause for the high measurement was that the meter was faulty and inexplicably started to record significant water usage and then fixed itself before it was tested.

Given the testing conducted demonstrated that your meter was accurate and, in the absence of enough evidence to suggest that the meter readings were incorrect to any material degree, the Board concludes Halifax Water billed appropriately for water consumption. How the water is consumed beyond the meter is not within the scope of the Board’s jurisdiction, nor is it Halifax Water’s responsibility.

“I’m feeling like nobody’s got any common sense,” Fineberg said in an interview Monday.

“I certainly know for a fact that I did not go through a swimming pool full of water a day for seven weeks, unbeknownst to me, and not have any damage.”

Halifax Water’s customer service people repeatedly told her she must have a leaky toilet.

Her toilet does leak, but it leaked before the water consumption spiked, and it still does. That doesn’t explain the massive increase, then decrease, in consumption.

Fineberg’s basement is carpeted, she said, meaning water there would quickly become obvious. Water damage at this scale anywhere in the home would’ve been obvious, she said.

If the water leaked just outside her house, it would still come into the basement or at least flood the lawn. And if someone stole the water from the outdoor tap on the front of the house, they would’ve had to park a truck on her small downtown Halifax street for four hours a day. 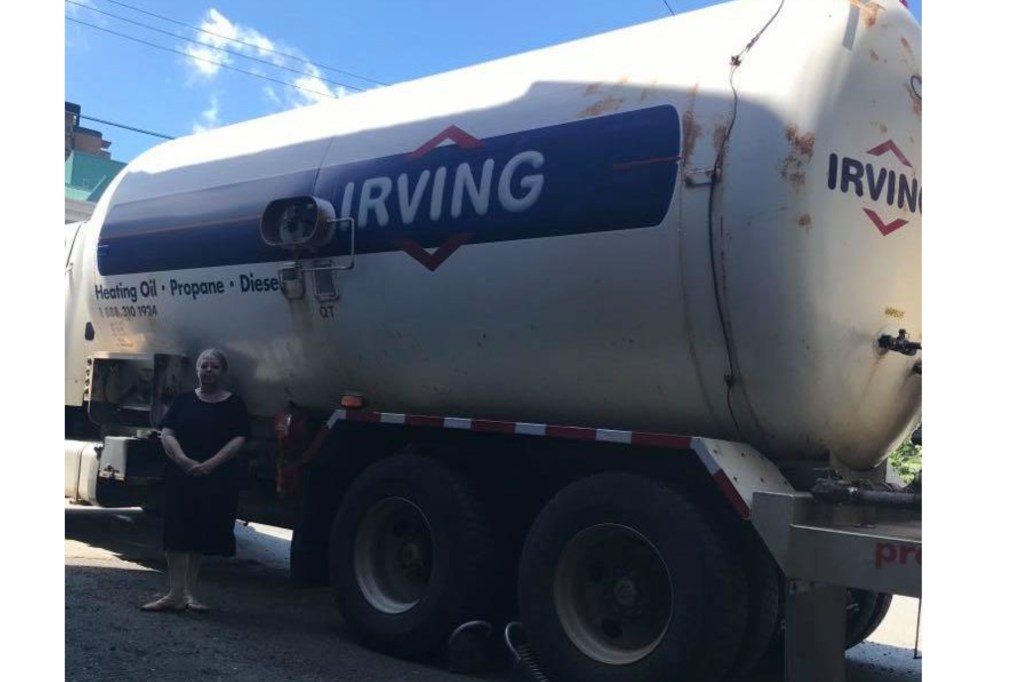 Allie Fineberg stands next to an oil truck. By her calculation, Halifax Water is charging her for the equivalent of filling this truck every two days for seven weeks in 2019. — Photo: Allie Fineberg/UARB

Fineberg believes there must have been some mistake: either a decimal point got moved, or the meter really wasn’t working. The meter was tested and found to be accurate, but Fineberg notes it wasn’t tested until after it stopped registering the astronomical consumption rates.

“I don’t know anything in this life that isn’t capable of making a mistake,” Fineberg said. “For them to tell me that this machine is 100%, sorry, the only thing in life that’s 100% is death. Other than that, there’s variables. You know, and I don’t think it’s right that I’ve been railroaded.”

As McGrath wrote in the decision, it is Halifax Water’s position that the smart meters don’t make mistakes:

Fineberg is not the first Halifax Water ratepayer to suffer this same fate. In 2011, CBC reported another woman, Edie Goulet, received a bill for $2,000 and Halifax Water told her to pay up because the old meters didn’t make mistakes either:

As [Goulet] made her way up the management food chain at Halifax Water, she says she was told by a few people that the meters don’t make mistakes.

Because they only check the meters every three months, Goulet says she wonders why the commission would be able to say that with such confidence.

Plumbers have told her if that much water was running through her home, she’d hear it.

Fineberg said she spoke with Goulet, and they feel like other people must be in the same boat. She’s calling on them to come forward.

“There are other people, I’m sure, that have been railroaded except nobody knows about anybody else,” she said.

“Unless a whole bunch of people get together and find out about this, everybody’s going to be kept by themselves and nobody’s going to know this was going on at all.”

As for her next steps, Fineberg isn’t sure. The Nova Scotia Court of Appeal can overturn UARB decisions, but Fineberg said she’s not sure how to go about the process to hire a lawyer for something like this. But she’s not done fighting the bill.

In an email on Monday, Halifax Water spokesperson James Campbell would not say whether the utility would require Fineberg to pay the full bill, citing “private customer information.” Campbell reiterated Halifax Water’s position that the water must have flowed through the meter.

“Halifax Water does not monitor how customers use their water once it passes through the water meter,” Campbell wrote.

“As noted in the NSUARB’s decision, ‘How the water is consumed beyond the meter is not within the scope of the Board’s jurisdiction, nor is it Halifax Water’s responsibility.’ Also, our water meters are positive displacement meters, meaning water must flow through the meter in order to register consumption.”

Asked what Halifax Water would say to other customers worried they may face the same issue, Campbell suggested they sign up for the utility’s new online billing system.