You are here: Home / City Hall / Halifax will finally get the data it needs to make smart decisions about transportation 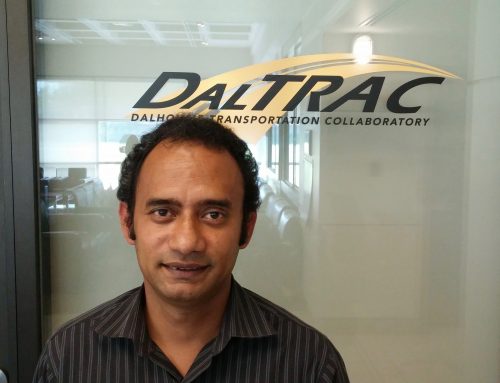 Ahsan Habib, director and founder of the Dalhousie Transportation Collaboratory (DalTRAC), wants to bring evidence to our transportation decision-making.

When my mother was a young lass, she got a job with the Toronto Metropolitan Planning Board, phoning Torontonians at home to ask them how they got to work. She would then carefully map out, with pen and paper, the route they took. She remembers the job well, no doubt in part because of the confusion her Newfie accent caused, especially when pronouncing the word “car.”

That was back in the early ’60s, but Toronto has continued its travel data gathering tradition to present day. Since 1986, they’ve been doing something called the Transportation Tomorrow Survey. Every five years, a dedicated research centre at the University of Toronto interviews upwards of 150,000 randomly sampled people from all over the region, asking them to share the details of how they get around. The data collected has fed all sorts of major and minor infrastructure decisions in Toronto and beyond for decades.

And this year, Halifax will finally get into the travel data game.

This fall, the Dalhousie Transportation Collaboratory (DalTRAC) will send out invitations to 10,000 Haligonians, asking them to document a day of moving around the HRM. Participants will be asked to simply log each trip they take in a 24-hour period, including locations, mode of travel, and nature of activity at their destinations. For car trips, they’ll also be asked the make and model of their car, to enable calculating GHG emissions.

The data will help set a baseline of our collective travel patterns, allowing us to measure the impact of our policy and infrastructure decisions in the coming years. It will also feed modelling software used by both DalTRAC and HRM to help project the potential effects of policies and infrastructure we are considering today.

With serious federal money on the table for transit infrastructure in the next few years, the ability to collect and analyze this data can’t come soon enough. 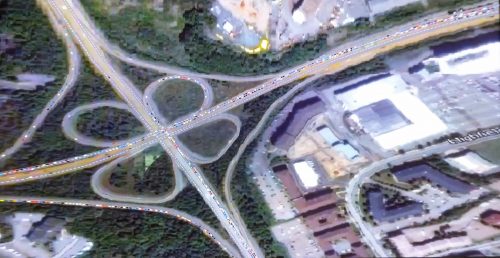 A computer model simulating traffic at the Dartmouth approach to the MacKay Bridge runs in the DalTrac office.

Halifax’s new Integrated Mobility Plan project manager, Rod McPhail, retired as Toronto’s director of transportation in 2012 (two years after Rob Ford came into office). In Toronto, MacPhail had the benefit of decades of Transportation Tomorrow Survey results. When he got to Halifax, MacPhail said he was surprised at the lack of data available. “It’s like you’ve been guessing,” he told me back in June.

DalTRAC’s founder and director is Ahsan Habib, an engineer who completed his PhD at the University of Toronto, where he worked first hand with the Transportation Tomorrow Survey. When he came to Halifax in 2010, he was motivated to replicate the Toronto model here. With some federal funding, he built the DalTRAC lab, and last year embarked on the first run of the NovaTRAC survey.

“I’m not saying that with data we’ll get the perfect picture, or perfect decision-making, but it’s another voice at the table,” says Habib. “And it gives quite a good legitimate argument for or against any project.”

Now you might be thinking, wait, didn’t I answer a census question about how I get to work? Why yes, you did. Halifax has long had the benefit of census data, but the census is a limited, blunt instrument when it comes to documenting travel. It focusses exclusively on commuting to work, and ignores all other purposes for travel, like getting groceries, going to the doctor, or dropping your kids at school. That’s a big gap. It also excludes students who only live in Halifax two-thirds of the year.

DalTRAC’s data, on the other hand, will look at our trips over a 24-hour period, taking in all types of activity, from school to work to shopping to recreation.

The data will be comprehensive, if only we can get enough of it.

Because they are hoping to document local level movement in and out of 219 traffic analysis zones in HRM, DalTRAC needs a large number of responses to the survey. And last year, when they ran a province-wide pilot version of the survey, the response was low.

After sending out 5,000 invitations to a random sample of Nova Scotians,  only 600 complete surveys returned. While that was enough to see regional patterns, it was not good enough for smaller scale conclusions.

This year, says Habib, the focus is on getting as many responses as possible. “We are trying to understand zone by zone traffic patterns,” says Habib. “That’s why this project is tricky and challenging. I need as much representation from Musquodoboit Harbour as downtown Halifax.”

Invitations for the Halifax-specific survey will go out in late September or October, but in the meantime, DalTRAC has already started collecting responses from all Nova Scotians to follow up on its 2015 data. Right now, you can go to daltraclab.ca to fill out your survey. After you’re done, go ahead and send the link to five Nova Scotians you know. The quality of the information we get from NovaTRAC depends on the numbers of complete responses. And the numbers of complete responses depends on, well, us.

“Nova Scotians are not yet very enthusiastic about completing surveys when they are contacted,” says Habib. “I got more calls asking about the survey then probably the responses.”

Part of the problem, says Habib, is that we’re just not used to sharing our transportation information, and we haven’t seen what it can do for us. “It was easier in Toronto,” says Habib. “They know every five years they get some sort of survey from TTS. They know the benefit of it.
Here we don’t have any benefit case. We haven’t seen yet the benefit of collecting data with something happening on the ground. Toronto had that, so people are really motivated to do the surveys.”

We all want better, smarter transportation infrastructure. But it’s like we’re expecting our bureaucrats and elected politicians to build it while denying them one of the basic tools they could use to do so effectively.

Filling out a NovaTRAC survey needs to become a basic, normal civic duty for everyone in Halifax and Nova Scotia.

Let’s get it done, already.