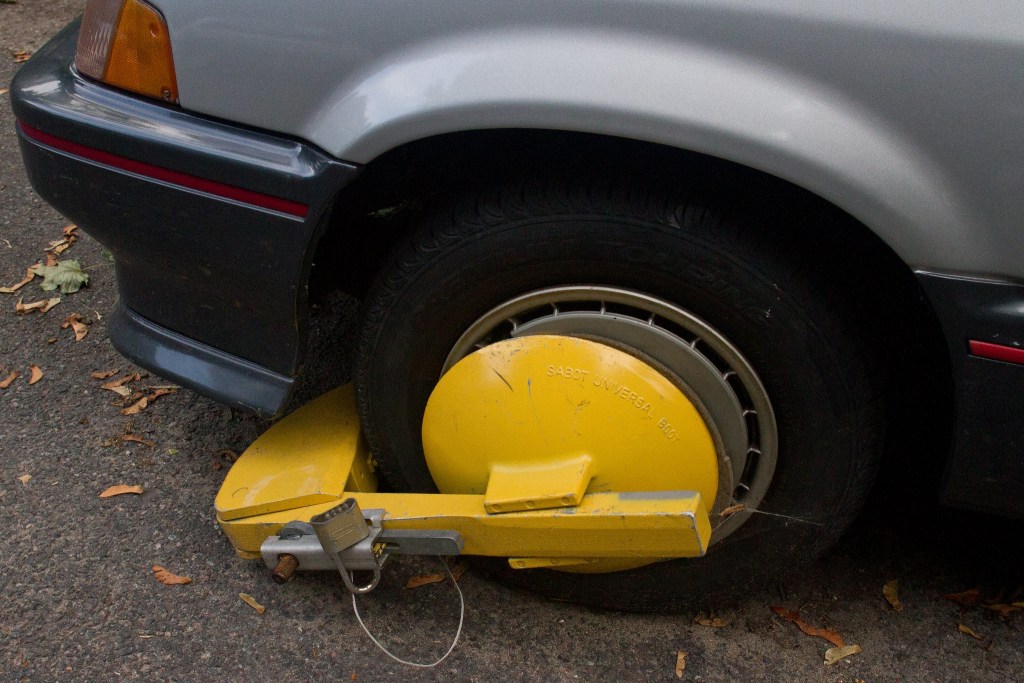 A “vehicle immobilization device,” otherwise known as a boot, is seen on a vehicle. Photo: Flickr/TonyWebster

New rules regulating the vehicle booting industry, introducing a cap on fees and a time limit on removal, are headed to regional council.

A new bylaw, the Vehicle Immobilization By-law, came to a virtual meeting of council’s Transportation Standing Committee on Thursday. Parking manager Victoria Horne outlined the new rules for councillors, explaining that they’re the result of a February 2020 motion from the committee asking for a staff report on a new bylaw.

Horne said the bylaw would require clear, visible signage in parking lots, including a phone number and the cost to have a boot removed. Employees removing the boots would have to wear a uniform, drive a vehicle displaying the company name, and carry identification. The employees would also have to become special constables, meaning they’d be subject to background checks.

After a driver finds a boot on their vehicle and calls to get it removed, a company would have 30 minutes to get to the parking lot. Once there, they would have to offer multiple payment options, including debit and credit, and provide a receipt, even for cash transactions. And the total fee for removing the boot could not be more than $60.

“It should be noted that industry has expressed extreme concern with this amount and has indicated that this will have grave impacts for their operating models,” Horne told the committee.

Staff arrived at that number based on the average fee derived from a jurisdictional scan of other municipalities with rules around the boots, including Moncton, Victoria, and Sudbury. Currently in Halifax, boot removal can cost more than $100.

Daniel Watson, owner of One-Shot Parking Solutions, said the cap of $60 would put him out of business. He’s currently charging $100 to remove the boots.

“A reduction of that magnitude truly makes it impossible to provide a living wage for my employees as well as operate the business,” Watson told the committee. “I’m not speaking hyperbolically. The business will close if we are forced to take a 40% reduction.”

The 30-minute time limit is a problem for Watson, too. He said his company aims to be there in 20 minutes, but he’s worried about being fined for the times when they can’t make it in 30 minutes.

Horne said the municipality would be flexible in fining companies for showing up late if the employee was stuck in traffic.

Watson wanted to speak to councillors before they voted on the proposal, but Coun. Waye Mason, chair of the committee, directed him and other speakers to the public participation opportunity at the end of the meeting instead.

Another speaker, Brandon Ellis, the Halifax manager for Target Park, a company that manages parking lots and relies on One-Shot to boot cars on those lots, said the speakers should have been able to address councillors before they voted.

Ellis said there was no consultation with the industry.

And a third speaker, Darcy Garrison, an employee at One-Shot Parking who boots vehicles, said the municipality should ease up on the price and time limit requirements.

Coun. Becky Kent expressed sympathy for the business, worrying the cut to $60 would be too much.

“The concerns around impacts on businesses is a big priority for me,” Kent said.

The committee recommended council adopt the new bylaw. When it reaches council, the bylaw will move through first and second reading before becoming law.

Mason suggested there should be a public hearing before second reading.