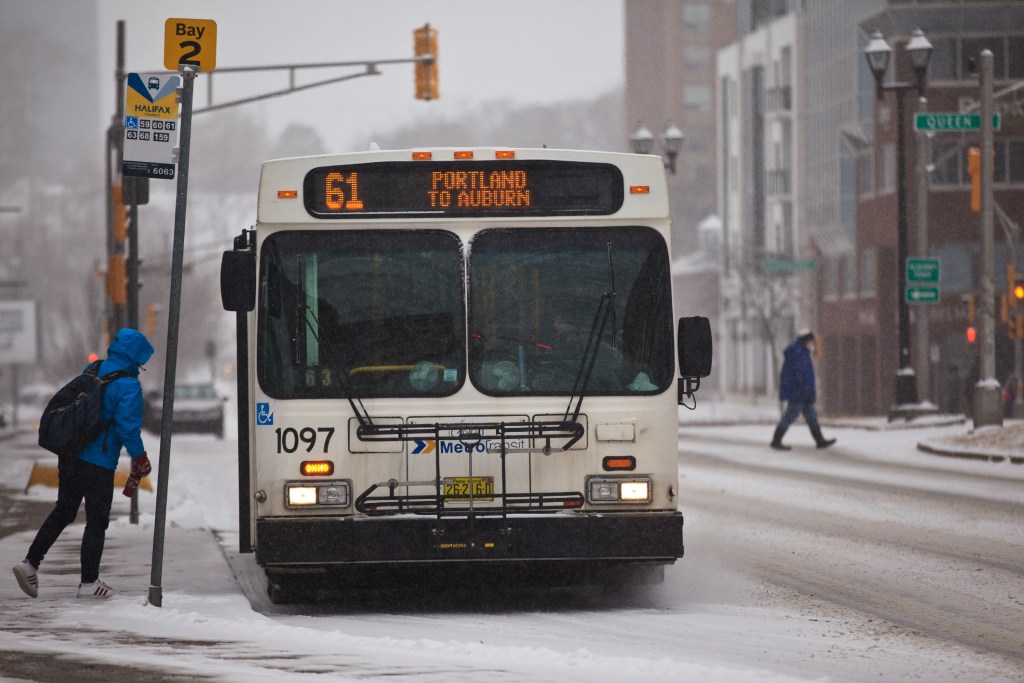 A passenger boards Halifax Transit’s Route 61 on Portland Street in December 2018. The 61 is one of several routes changing in 2021. Photo: Zane Woodford

Councillors have voted to move forward with Halifax Transit’s proposed 2021-2022 operating budget, including changes to 24 routes planned for the year ahead, mostly on the Dartmouth side of the harbour.

The $38.5-million budget represents a 4.6% reduction from the COVID-cut 2020-2021 budget. While it is expected to start to rebound, transit ridership plummeted during the pandemic.

Reage told councillors he’s banking on 60% of pre-COVID fares in the first quarter and 65% for the rest of the year.

“I think those are pretty conservative numbers that we’ve used, which I think is wise given some of the uncertainty,” Reage said.

“But with a lot of the optimism, faster rollouts of vaccines and that, I do feel comfortable with those numbers and there is a chance they’ll actually be low.”

Notwithstanding the still-reduced fares, Halifax Transit is moving ahead with new electronic fare systems this year, with a request for proposals going out soon, Reage said. That will allow passengers to use their phone to pay and then display it to the driver like a transfer. Passengers will still be able to use cash and tickets as well, Reage said.

And after delaying the implementation due to COVID-19, Halifax Transit will implement the final route changes of the Moving Forward Together Plan. That plan, approved by council in 2016, is a redesign of the city’s bus system, aimed at a transfer-based network.

Here’s a breakdown of the changes for 2021-2022, tentatively planned for Nov. 22, route by route, with councillors’ concerns about the new routes. (The current route map, for reference, is here.) 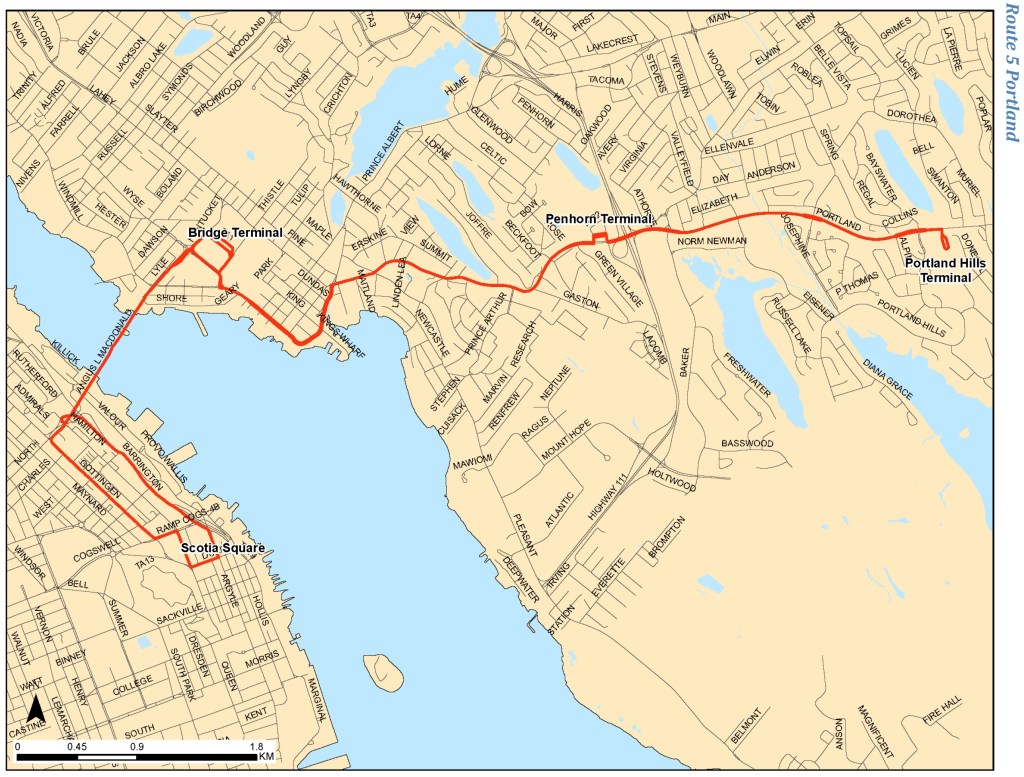 The new Route 5 will run from the Portland Hills terminal, through downtown Dartmouth and over the bridge to Scotia Square.

Coun. Becky Kent, who represents District 3—Dartmouth South-Eastern Passage, questioned why so much of the change, as shown below, is concentrated in Dartmouth.

“This year is basically the Dartmouth side of the harbour,” Reage said, noting there have already been changes in the last few years in Halifax, Clayton Park, Bedford and Sackville.

“It’s not that there was anything specific, I guess, in District 3 that precipitated change. It’s change throughout the municipality. This year just happens to be the Dartmouth, Cole Harbour, Eastern Passage … It’s your turn for the implementation.” 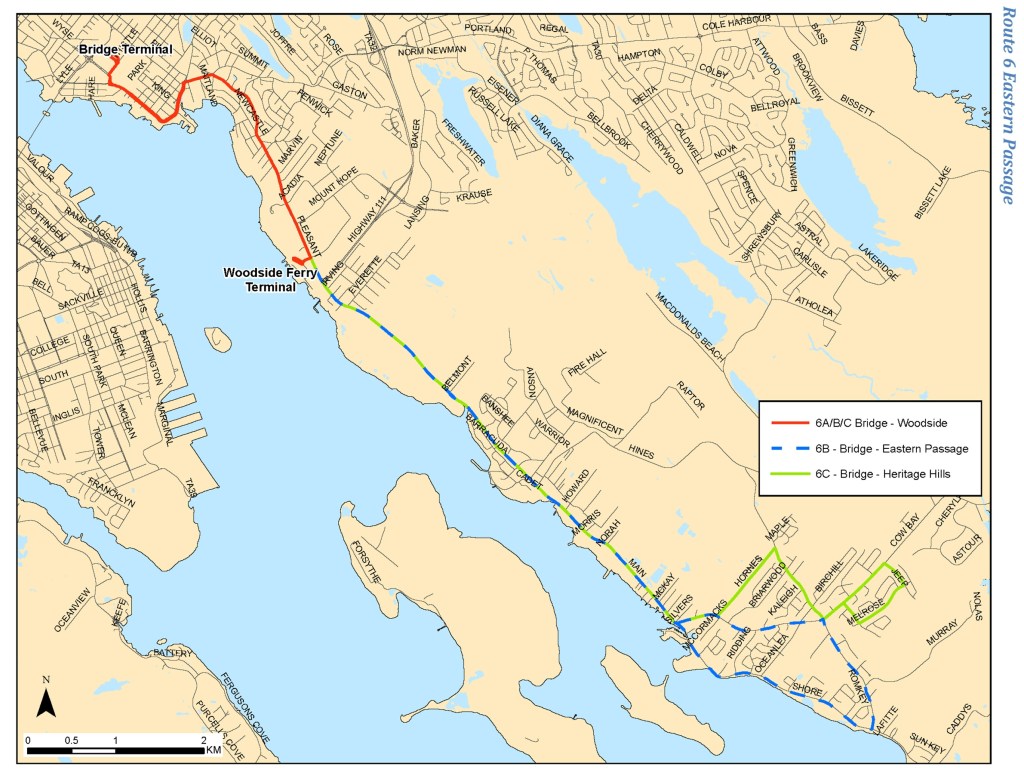 In Eastern Passage and Woodside, routes 60 and 63 are being replaced by the new Route 6. The replacement, like the 5, is also a corridor route. It’s also what Halifax Transit calls a “branched” route, with routes 6A, 6B and 6C, “serving Woodside, Eastern Passage and Heritage Hills respectively.”

“Routes 60 Eastern Passage/Heritage Hills and 63 Woodside will be removed with this service change. No service will be provided on Irving Street, Franklyn Street or Everette Street.”

That didn’t sit well with Kent, who made a motion for a briefing note on keeping the service on Irving, Franklyn, and Everette streets, where Route 63 used to turn around.

Councillors voted in favour of Kent’s motion, and Halifax Transit will bring a briefing note to council putting a dollar figure on Kent’s request in time for the budget adjustment list debate.

The change as proposed comes with an annual cost of $88,000. 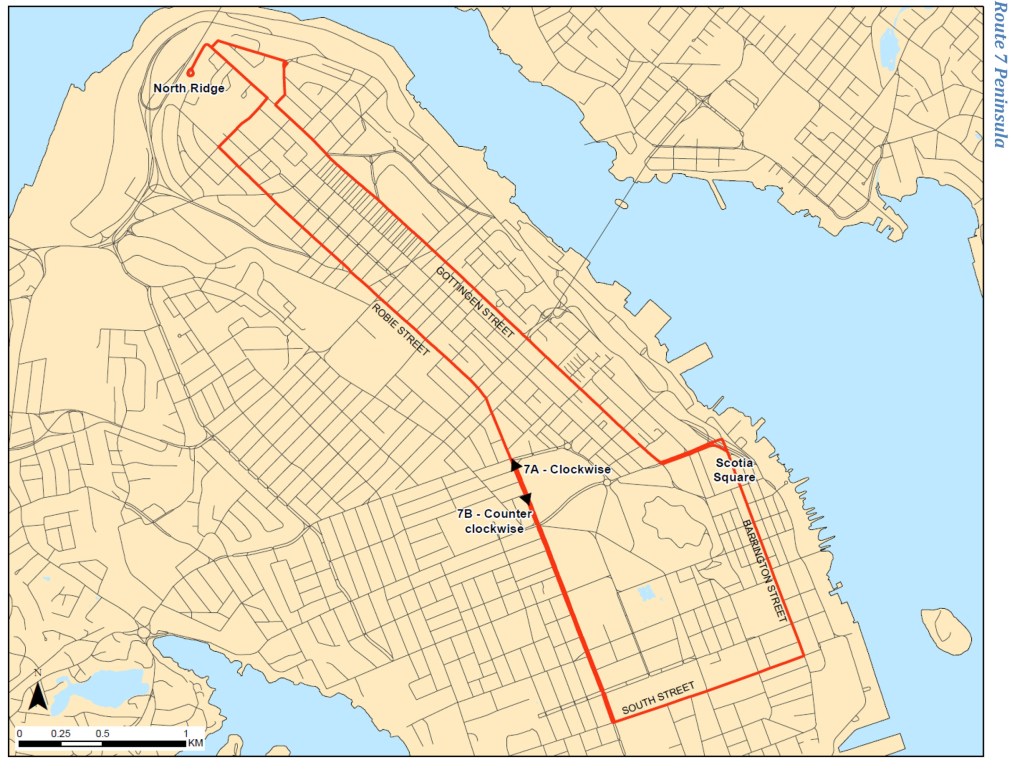 The new Route 7 will replace the current one, and like the Route 6, it’s a branched route, with a 7A and a 7B.

“It will operate as a two-way loop to simplify the routing; Route 7A will travel clockwise and Route 7B with travel counter clockwise, enabling frequent transfer connections with other routes,” reads the service plan.

“Routing and bus stops will be adjusted in the north end of the Peninsula to accommodate this change.” 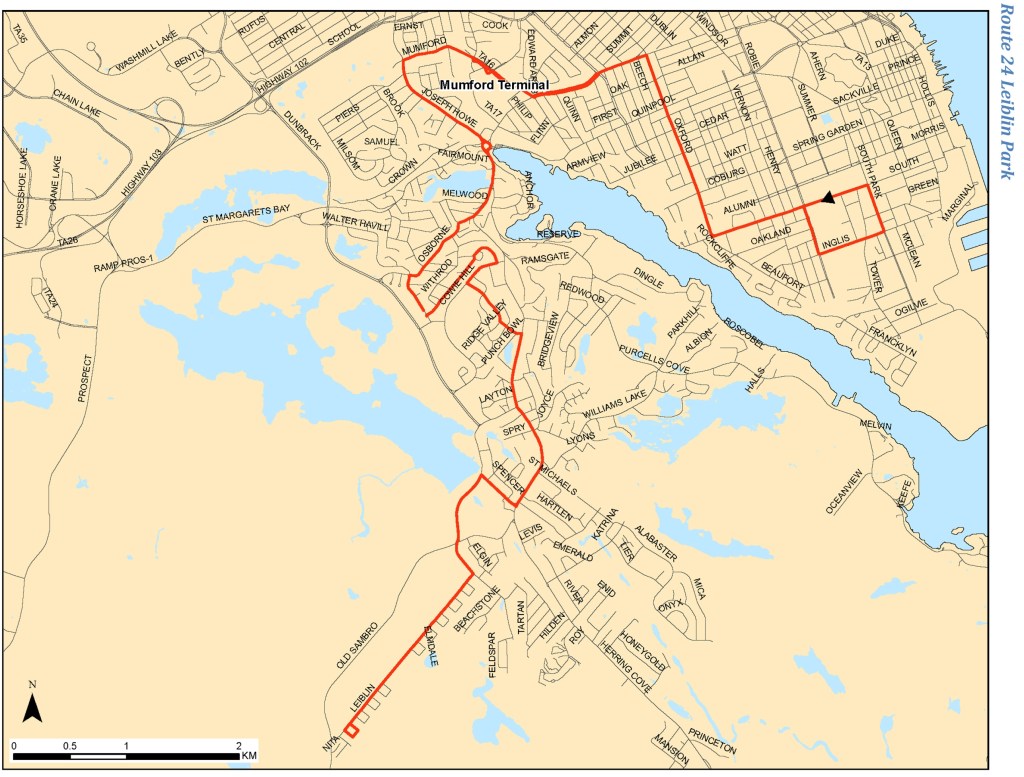 Route 24 will replace Route 14, and unlike the 14, it will end at Saint Mary’s University rather than continuing to Scotia Square and turning into the existing Route 61. 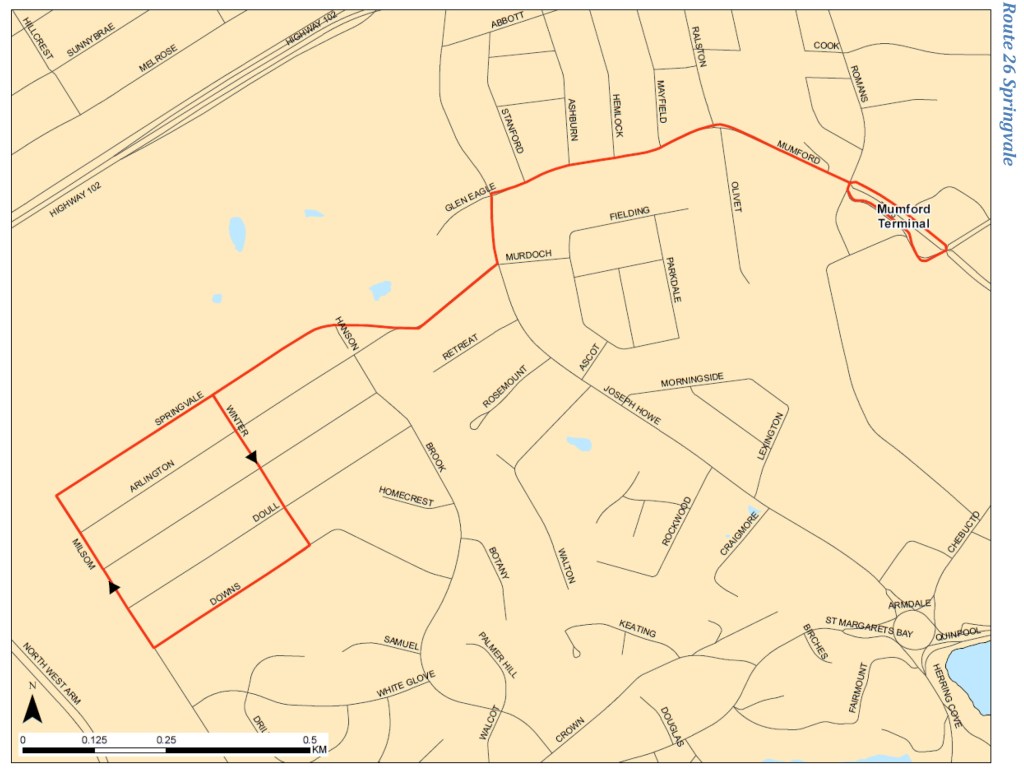 As noted above Route 26 will replace the existing Route 5.

It follows the same route from Springvale to Mumford Terminal, but it stops there, “to reduce redundancy with the abundance of other available routes serving Mumford Terminal to downtown.” 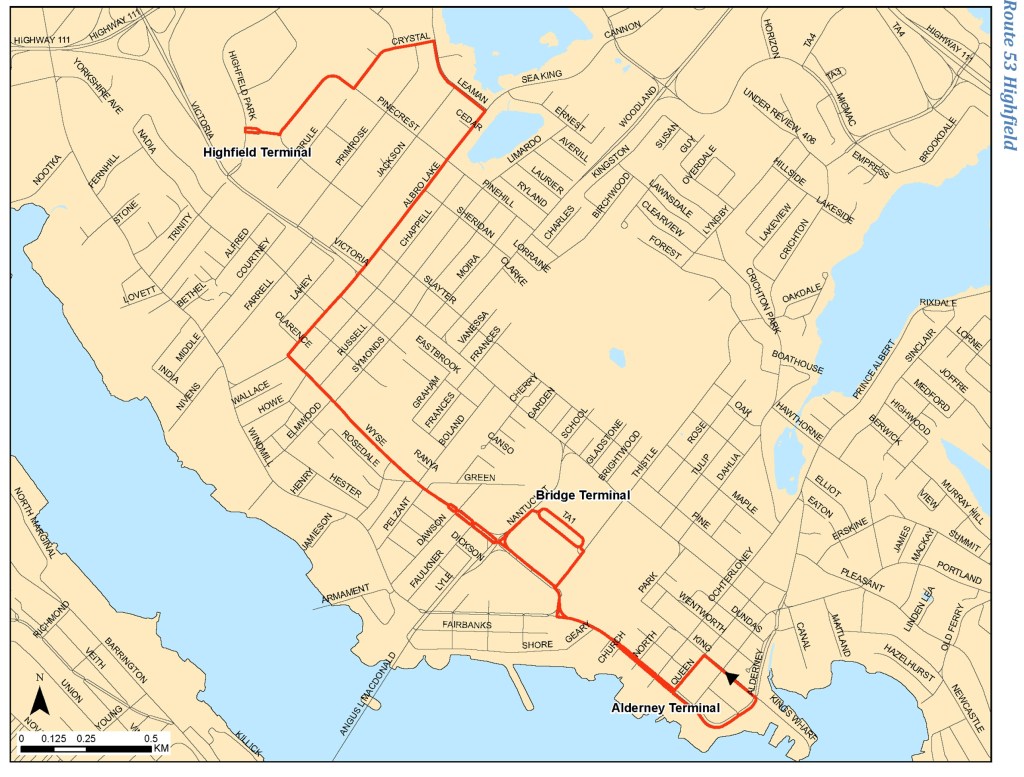 The route will be similar to the existing one, but it will exclude Victoria Road. 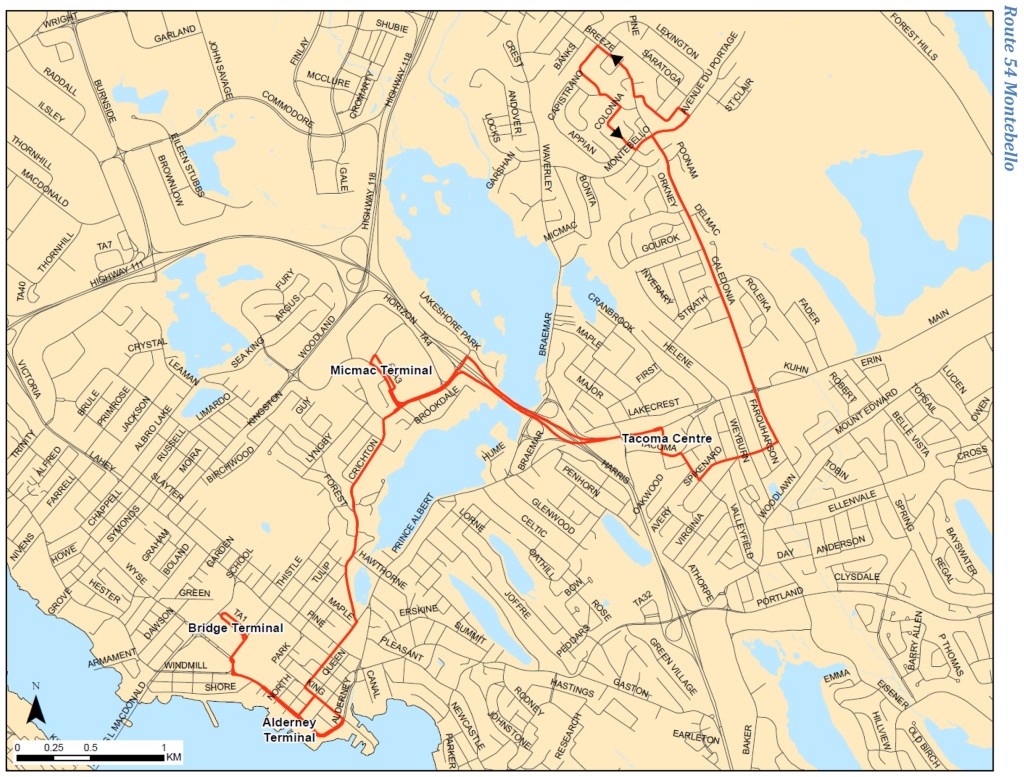 The name is staying the same, but the route is changing to continue on to the Bridge Terminal from Alderney, where it currently stops.

There are also changes to the loop at the other end, on Breeze Drive and Appian Way. 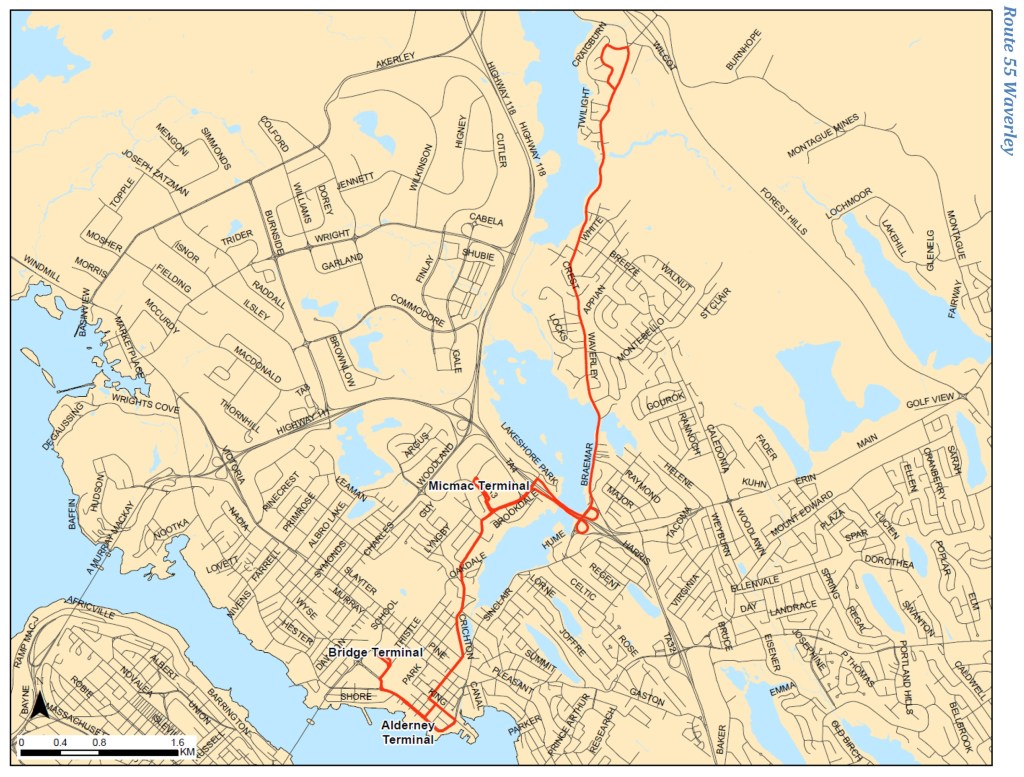 The current Route 55 Port Wallace is getting shorter, gaining a neighbourhood loop and being renamed Route 55 Waverley.

Citing low ridership, Halifax Transit is proposing to stop the route 3 km short at Charles Keating Drive, rather than continuing down Waverley Road to the Highway 118 underpass, where it turned around in a gravel parking lot.

The new route will use Charles Keating Drive and a portion of Craigburn Drive to create a loop at the end, and that had Coun. Cathy Deagle-Gammon, who represents District 1–Waverley-Fall River-Musquodoboit Valley, asking questions.

Deagle-Gammon has heard from residents on Craigburn Drive who don’t want the bus running through their neighbourhood.

“The community would really like to see another option and consideration done.”

Dealge-Gammon moved for a briefing note on the proposal, and said she wants to set up a meeting with the residents and Halifax Transit. 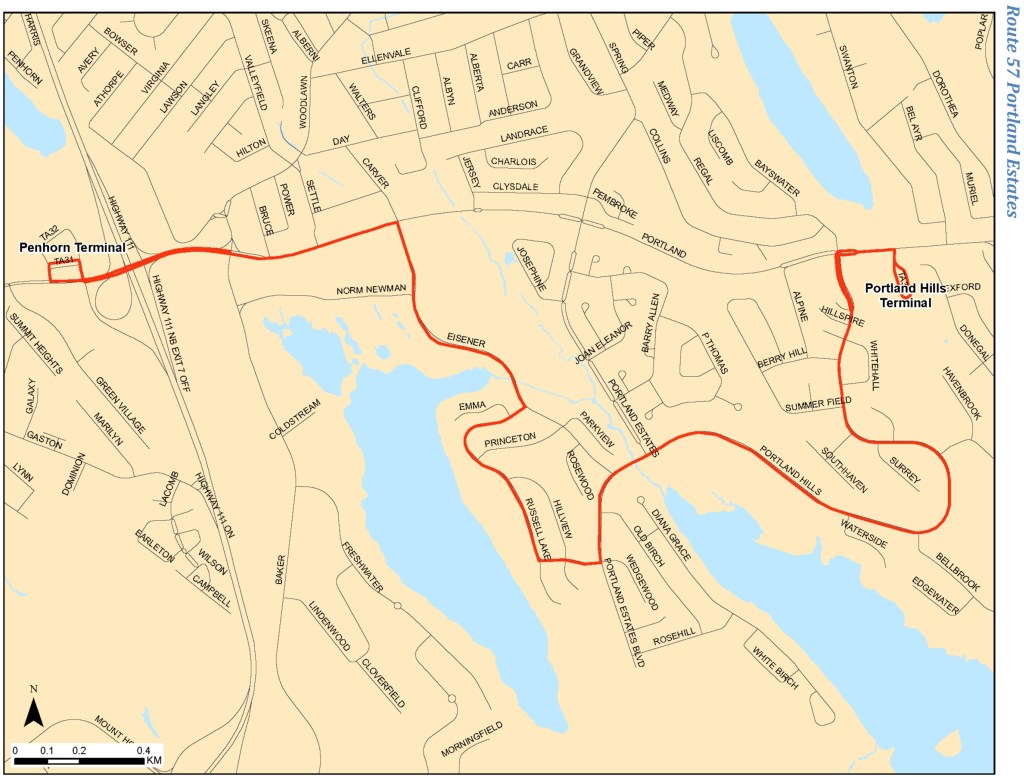 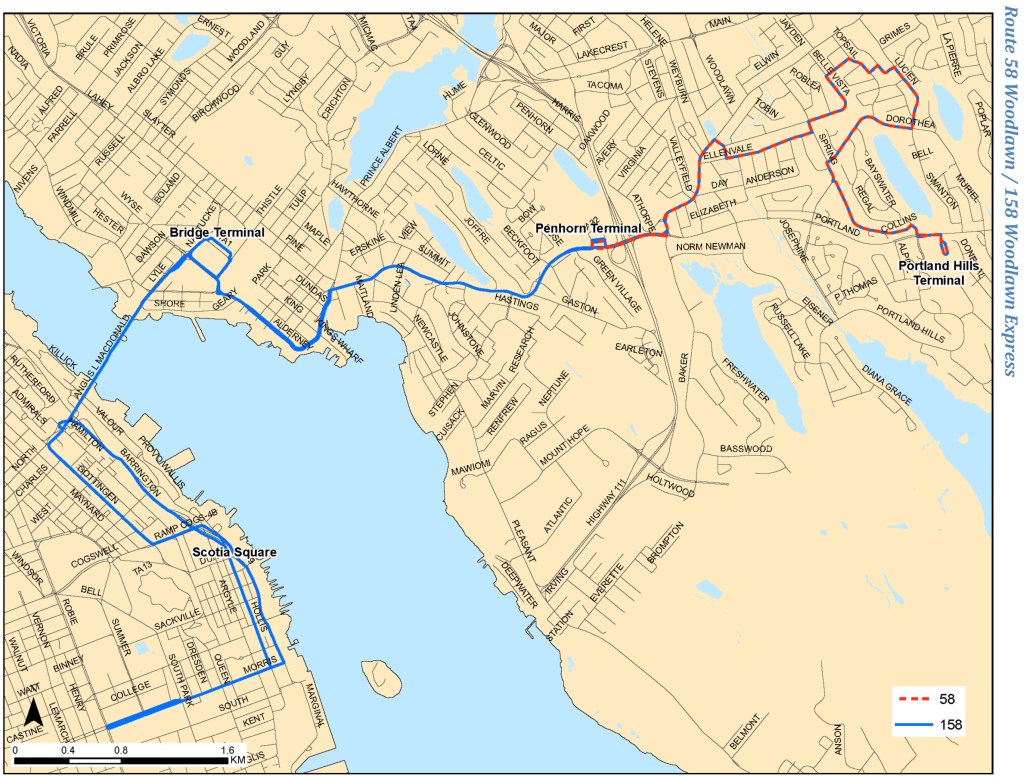 The existing bus keeps its name for part of the route, but ends at a terminal — Penhorn Terminal. During peak, rush hour times, the bus runs the full route as Route 158 Woodlawn Express, a new express bus.

The express buses are like the old MetroLink buses, running straight downtown with few stops. This and the other new express buses below will replace Route 159 Portland Hills Link.

With a slight change along Spring Avenue, the Route 58 will follow the status quo between Portland Hills Terminal and Penhorn Terminal, seven days a week, but it will turn around at Penhorn Terminal.

“This route will terminate at Penhorn Terminal however it will be replaced during peak hours in the peak travel direction by the route 158 Woodlawn Express to provide direct trips from the local area to downtown Halifax,” the service plan says.

The Route 5 is meant to replace the portion of the existing 58 between Penhorn Terminal and the Bridge Terminal. 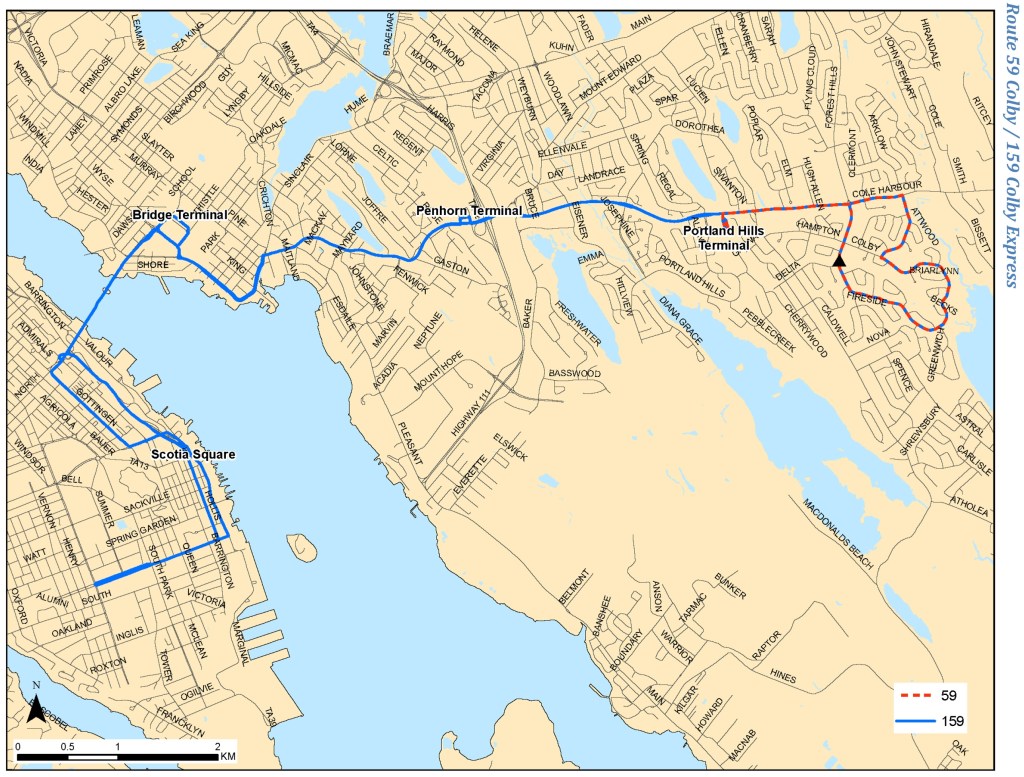 Like the 58, the full 59 will turn into a peak-time express bus, Route 159 Colby Express, using the existing route.

Off-peak, the 58 will turn around at Portland Hills Terminal. 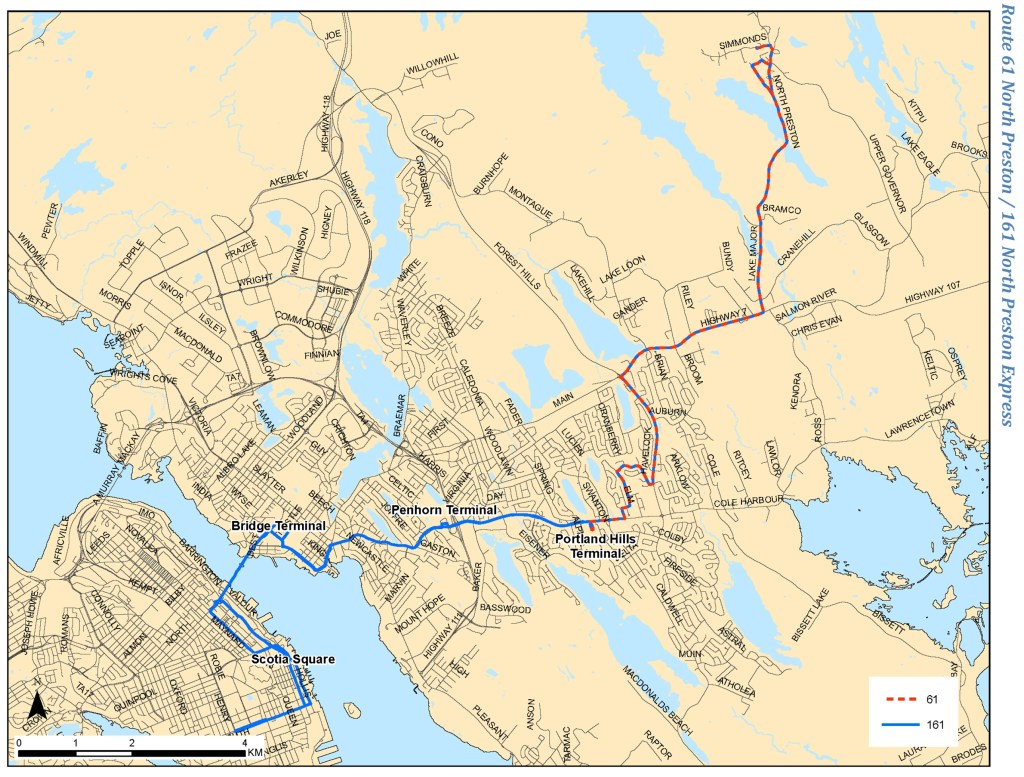 It will follow the existing route between North Preston and Highway 7, but change between Highway 7 and Portland Hills Terminal, using Forest Hills Parkway instead of snaking through the Auburn Drive area.

At Portland Hills terminal, the route turns around during off-peak times, but during rush hour, it continues on to downtown Halifax as the Route 161 North Preston Express. 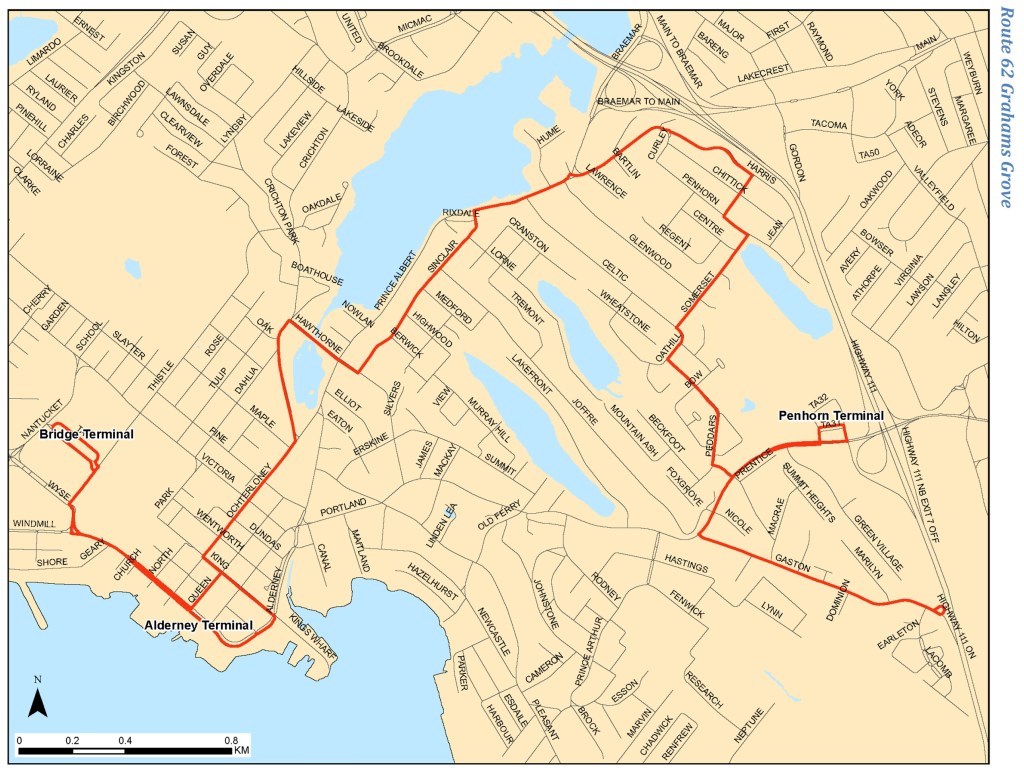 Route 62 Wildwood becomes Route 62 Grahams Grove, but now only running from the Bridge Terminal to Gaston Road via Manor Park and Penhorn Terminal. 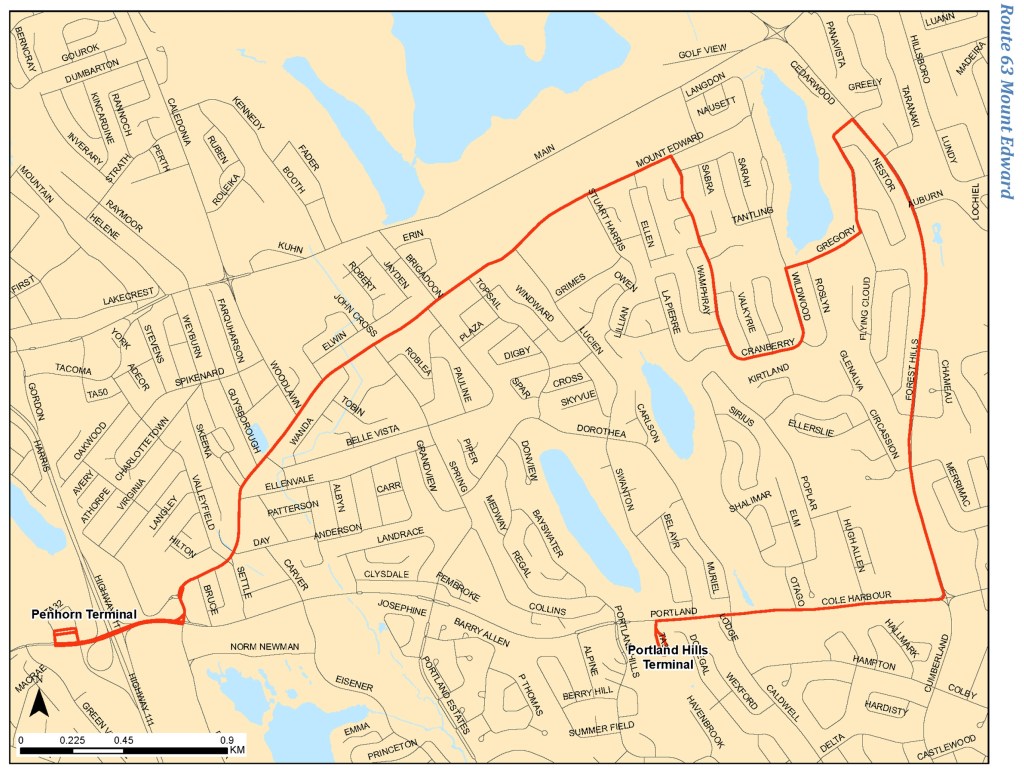 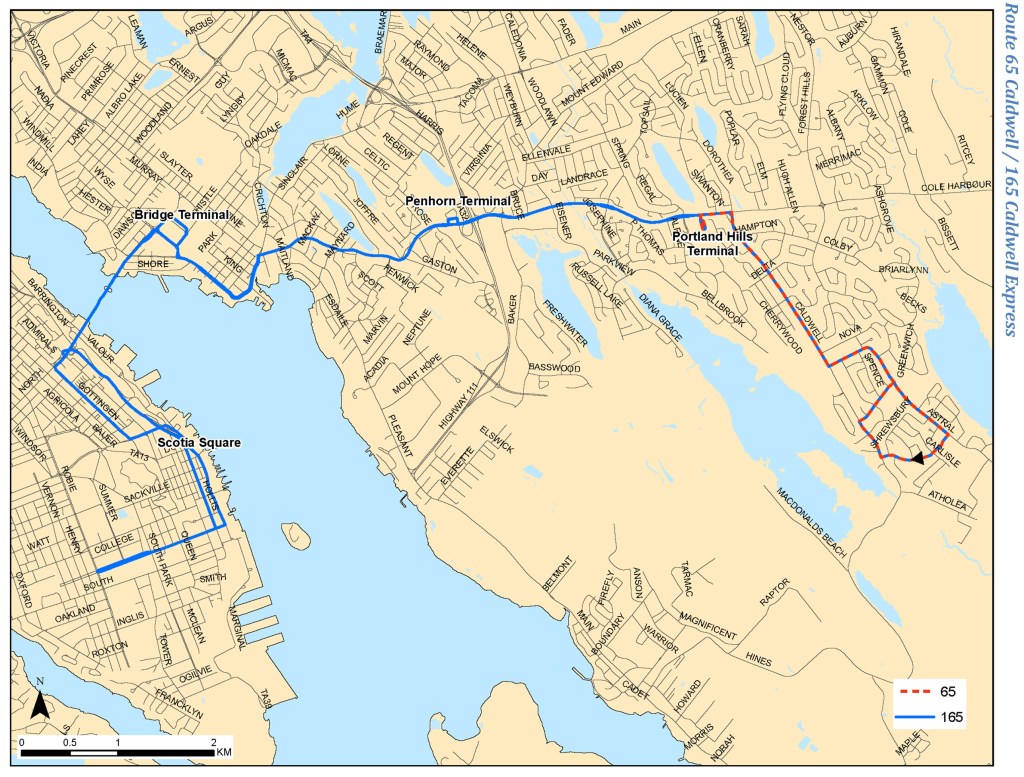 The revised Route 65 operates like the 58, 59, and 61 — with peak express service running between Caldwell and downtown Halifax via the Route 165 Caldwell express.

Like the others, the local portion of the route turns around at the Portland Hills Terminal off-peak. 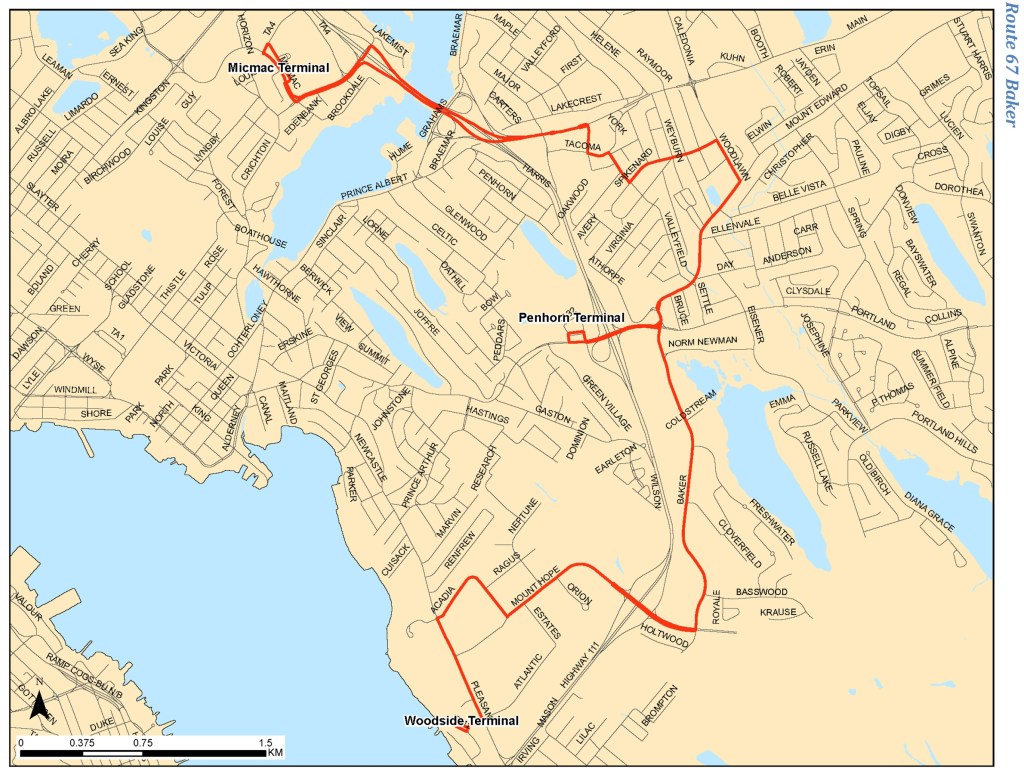 This new route replaces Route 66 Penhorn, which is being discontinued, and replaces the portion of Route 57 between Penhorn Terminal and Woodside Ferry Terminal. 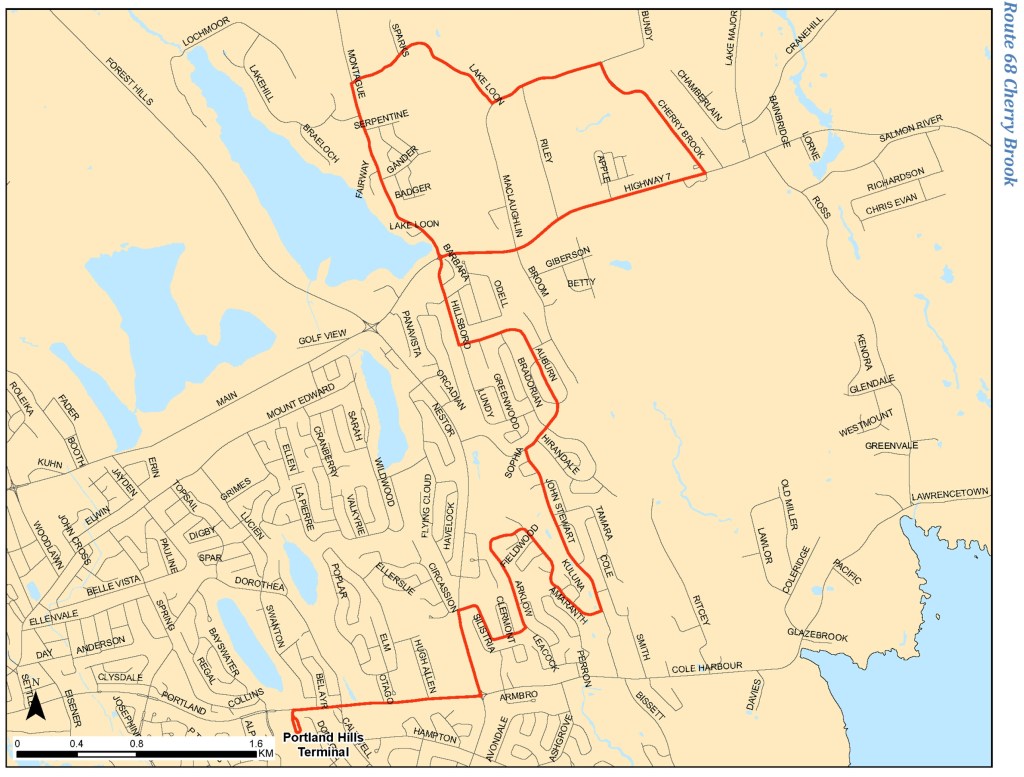 Route 68 Cherry Brook takes on some of what’s now Route 61 — “south of Hillsboro Drive it will follow the same routing as the existing Route 61 Auburn/North Preston,” says the service plan.

It stops at the Portland Hills Terminal and gets replaced by Route 168B Cherry Brook Express, which will run from the usual Route 68 to downtown Halifax during peak times. 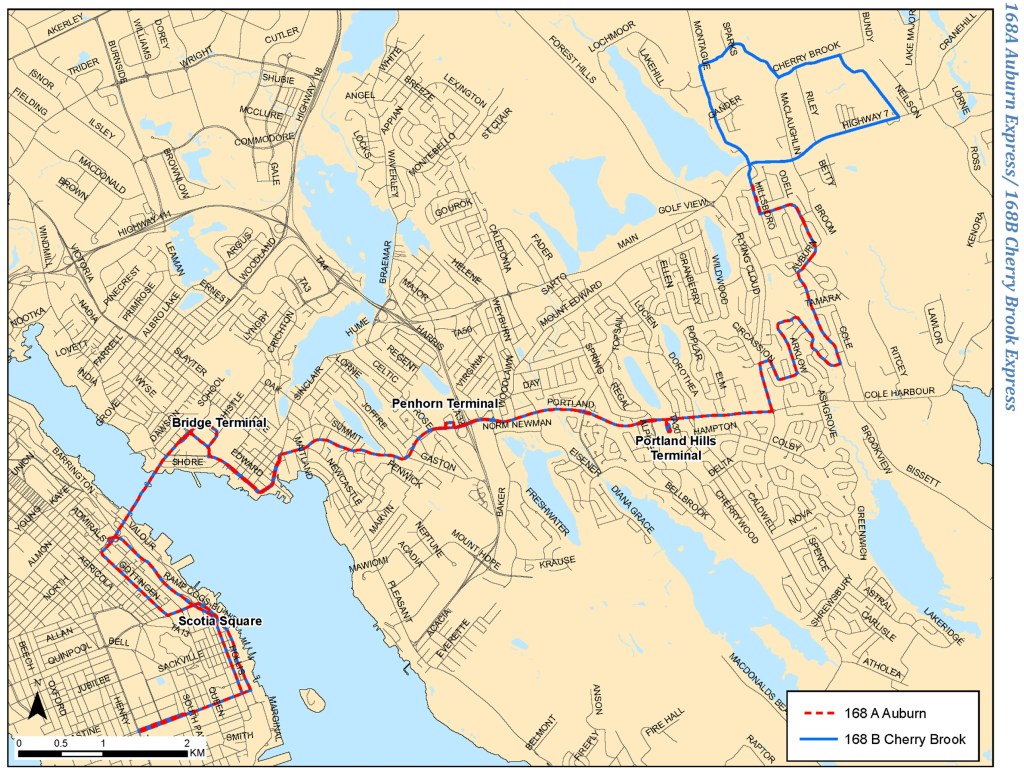 Route 168A Auburn will “operate at peak between Auburn and downtown maintaining the frequency of peak service to this area,” according to the service plan. 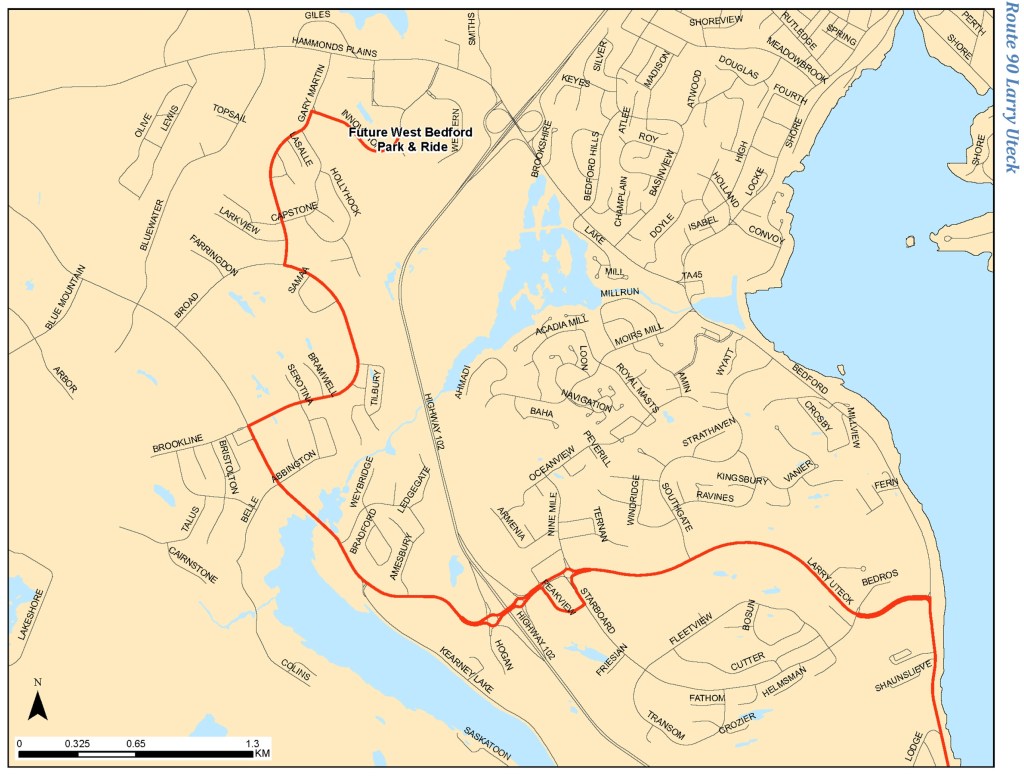 The change has no cost or savings. 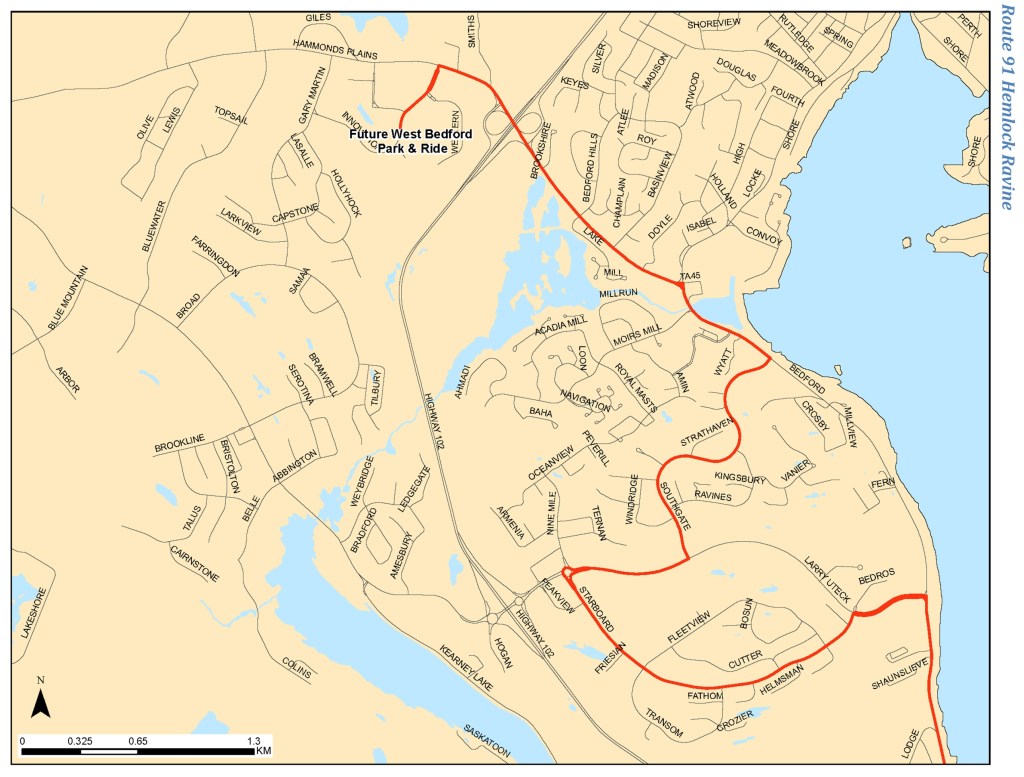 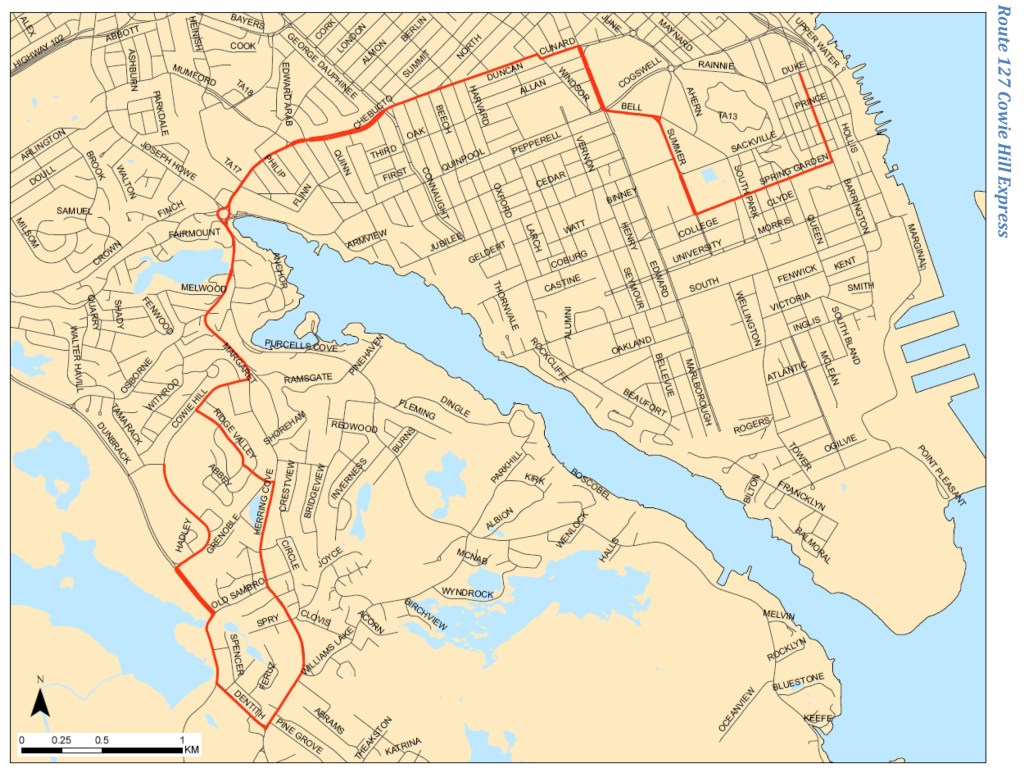 The new route follows the existing one, except it uses Quinpool Road instead of Chebucto Road and it “will be adjusted slightly to provide service to Long Lake Village, removing service from Old Sambro Road east of Dunbrack Street.”

The change is cost-neutral. 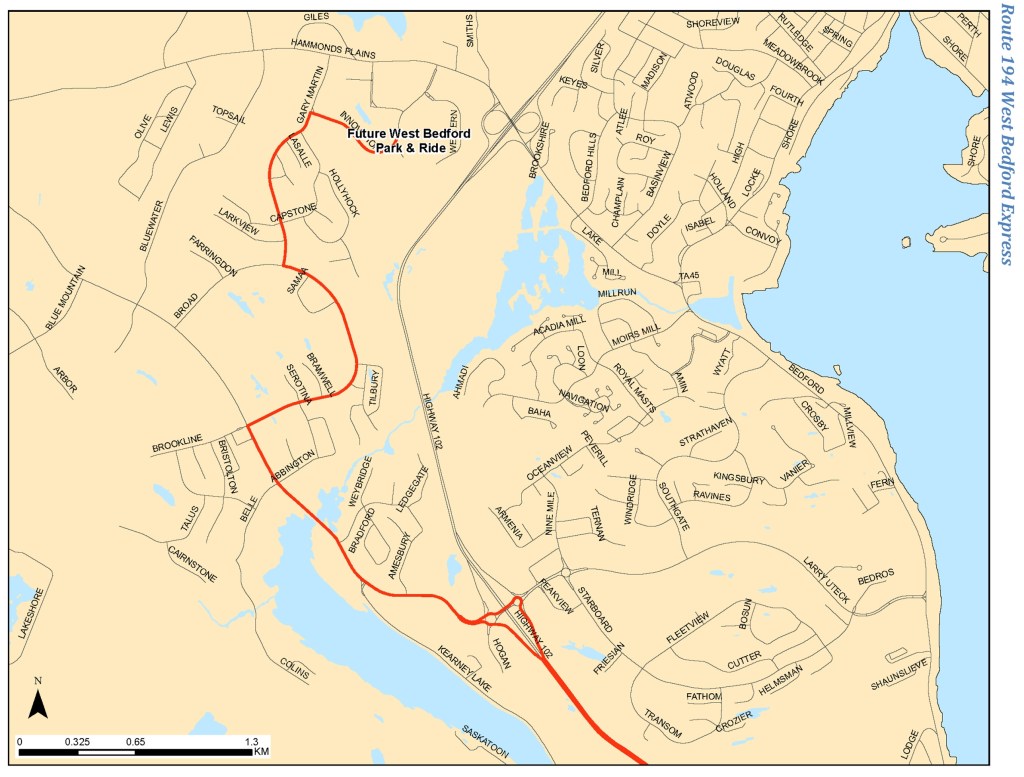 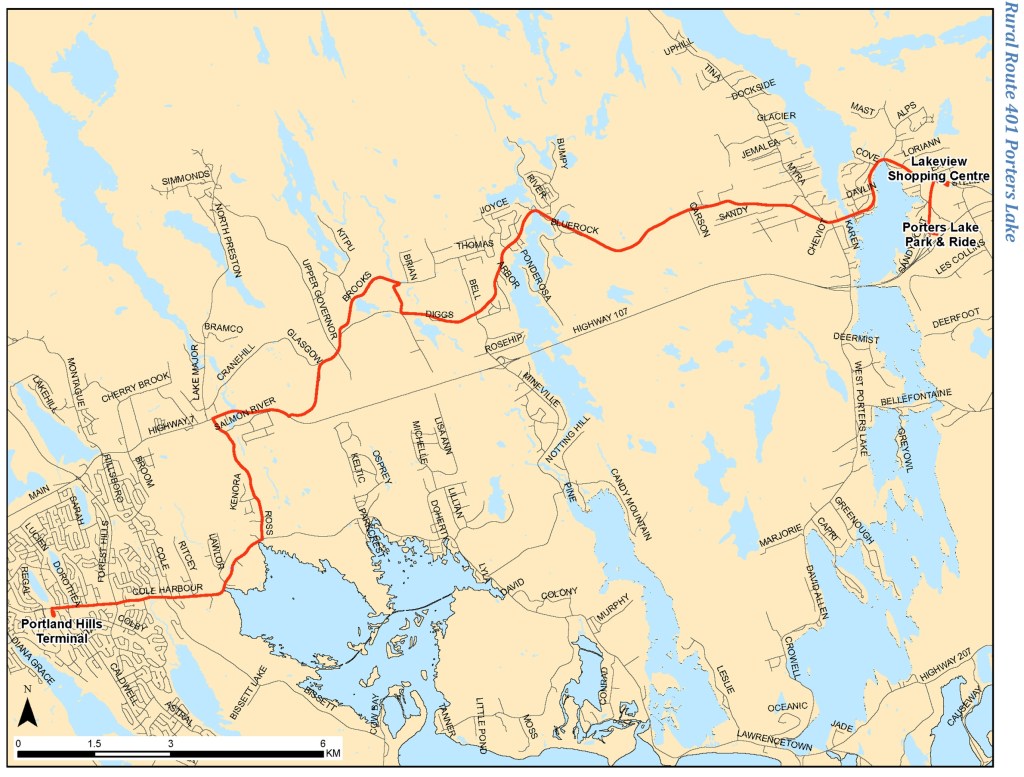 This route is being adjusted to extend to the park and ride in Porter’s Lake, and discontinue service to Seaforth.

“Public consultation will inform options to change the routing to include Mineville or utilize service hours to provide either weekend service or additional weekday trips,” the service plan says. “All options will remain cost neutral aligning with Policy T-7 of the Regional Plan which states that services outside of the Urban Transit Service Boundary shall not be increased.”

There’s no cost or savings from the changes. 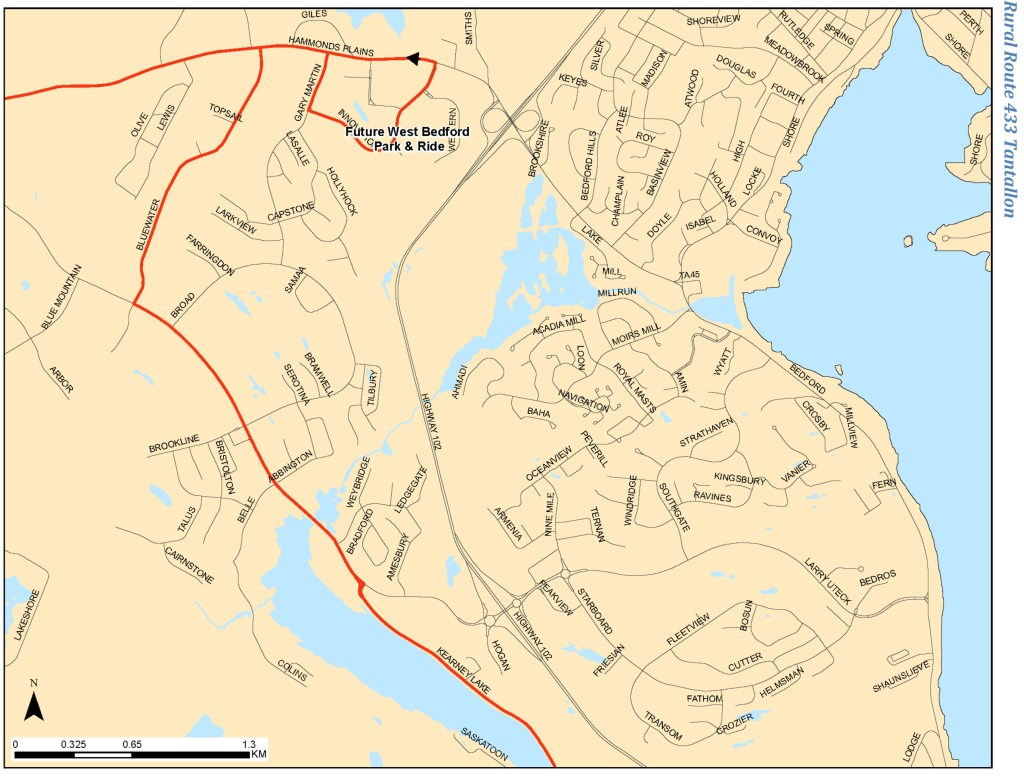 Coun. Patty Cuttell moved for a briefing note on a change already made to service in her district, cutting off the new Route 415 Purcells Cove with the last trip from Mumford Terminal at 5:45 p.m.

And Coun. Iona Stoddard moved for a briefing note on improving service to the Sheldrake Lake Park and Ride in her districts.

Those motions both passed.