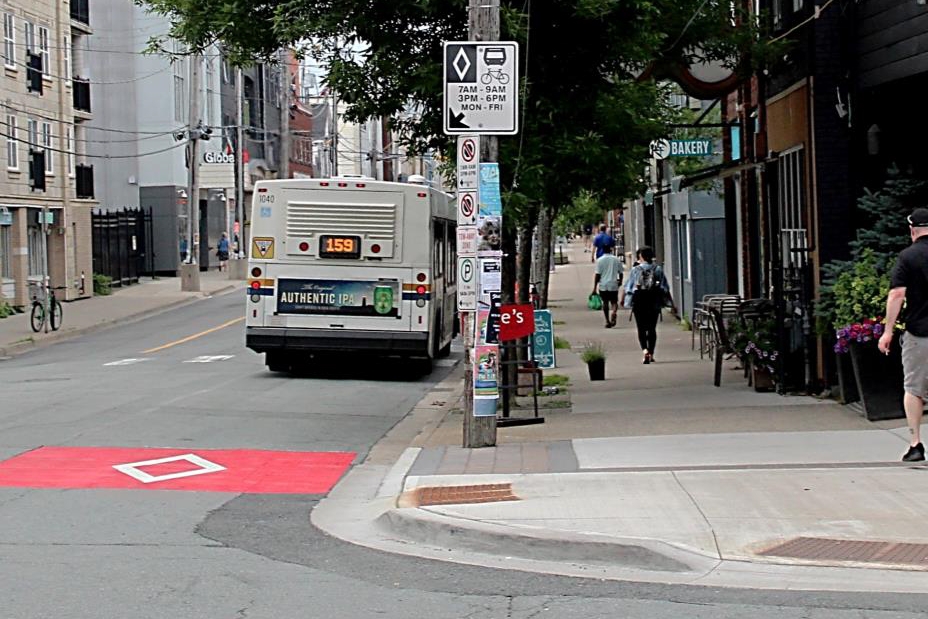 The Gottingen Street bus lane in a photo from the staff report. Photo: Halifax Transit

That’s according to a report coming to Halifax regional council on Tuesday evaluating the 2019 performance of the bus lane, completed in late 2018.

The bus lane uses the northbound, or outbound, lane of Gottingen Street from Cornwallis Street to Charles Street. Transit staff originally recommended keeping the lane free of parked cars all day on weekdays, but facing backlash from local businesses, councillors decided to change the plan to only prohibit parking and loading at peak times — from 7 to 9am and 3 to 6pm.

Now those restrictions could apply only in the afternoon.

Here’s what Halifax Transit found over 2019:

The bus lane is making all traffic flow more efficiently on Gottingen Street, according to the staff report, but because there are often still vehicles parked there at 3pm, “It takes staff resources to have them removed, and often the first 15-30 minutes of the time period are not used effectively.

“It only takes one illegally parked vehicle to impact the entire lane and flow of the street.”

To raise awareness of the parking restrictions, the staff report contemplates more signage or more red paint indicating the lane, but doesn’t actually recommend in favour of it.

The only change recommended for council is to remove the parking restrictions in the morning, when the heaviest traffic flows in the opposite direction.

“Removing the weekday morning peak would reduce the impact to on-street parking, simplify parking restrictions, and reduce the enforcement burden for the bus lane.”

Regional council meets at 10am on Tuesday.

Other transportation-related items on the agenda include the recommended appointment of transportation and public works director Brad Anguish as the city’s traffic authority and an application for $2 million in funding from the provincial government for the purchase of five new buses.