The latest Halifax Transit quarterly report came to council’s transportation committee last week, and as you may have read in Friday’s Morning File, the news wasn’t great. The stats show a continued decline in ridership numbers: a two per cent drop for April to June 2017 as compared to 2016. The drop, at least, is not as bad as the previous year, when spring ridership went down four per cent.

For context, stagnation or declines in transit ridership have been noticed across Canada and North America in the past few years. The Globe and Mail reported last year that transit agencies in the major Canadian cities are “stumped” as to the causes. Laura Bliss in Citylab narrows the “culprits” down to “the rise of ride-hailing services, budget cuts, cheap oil, or bad service.”

Even transit consultant Jarret Walker, who has admonished journalists for calling trends in transit too soon, is starting to believe that there’s a pattern, and is calling on transit researchers to step up and start figuring it out, right down to the nitty-gritty, route-by-route level.

It’s going to be helpful, says Walker, to know where we are losing ridership specifically: is it on the least reliable route in our system, the 20 Herring Cove? Or is it on our more reliable, though more likely to be gas-price-dependent suburban express routes? Is it on routes where we run buses every 10 minutes (except when they are stuck in traffic), like the 1 Spring Garden? Or the less frequent stalwarts like pretty much the rest of our route system? (As a friend recently said to me, there’s being 10 minutes late because you missed a bus, and then there’s being 40 minutes late because you missed a bus. Obviously, one is more of a deal-breaker.)

This kind of micro-level analysis is new to Halifax Transit, but it is starting to happen. The latest quarterly report includes route by route boarding numbers and on-time performance data.

The only thing that’s missing is comparable numbers over time, and those will take, well, time.

But we do, for now, have a snapshot of our service, and where it is most lacking. Which brings us to the next big news about buses in Halifax: the functional design proposals for our first two transit priority corridors are in.

Bayers Road and Gottingen Street were identified years ago in the Moving Forward Together plan as in need of upgrades to help buses get through traffic, and now, thanks to the momentum brought to us by the Integrated Mobility Plan (coming soon to a council near you) we get to see what our transportation planners have in mind, and weigh in on it.

The biggest changes being proposed are for Bayers Road, a notorious traffic back-up zone used by six different routes that carry an average of 19,414 people on buses every weekday. That’s a lot of people! The routes using Bayers Road have across the board poor peak-hour on-time performance, varying from 51 per cent to 68 per cent, well below the system average of 77 per cent. So yeah, there’s a big problem here, everyone knows it, and now there’s a potential solution to help fix it.

Consulting engineers WSP have proposed three options for Bayers Road, the most ambitious of which calls for road widening to allow for two new dedicated bus lanes running from Windsor Street to just past Romans Avenue. 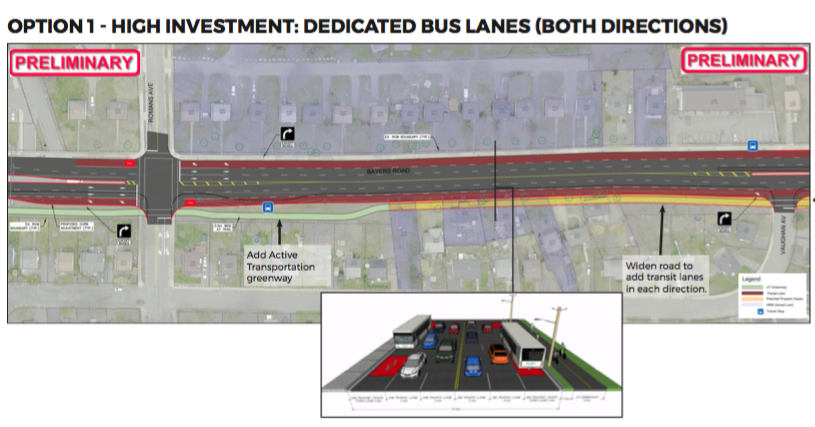 Apparently reception at the first and only public meeting to showcase these options (you can weigh in online right now, until October 16) was warm. Bayers Road has been slated for road widening for decades, but only recently has that widening been proposed for the purposes of transit lanes. And with narrower vehicle traffic lanes becoming the norm, this most recent proposed widening is less than what would have been proposed in the past.

The most surprising part of WSP’s ‘high investment’ option is a new section of road and overpass connecting Connaught Avenue to the Halifax Shopping Centre driveway. The new section of road passes through the lot at Connaught and Bayers, the same lot that was recently listed by Halifax Transit as a candidate site for a terminal to replace the Mumford Terminal. (It’s fair to say that a look at this Bayers Road plan would very likely have influenced opinions on a Bayers Road terminal option. I know it would have influenced mine. There are a lot of transit planning balls in the air right now, and it’s hard to see how they will all interact as they hit the ground.)

In the “medium investment” option, the new road accessing the shopping centre comes in at street level at a realigned intersection instead of an overpass. Either way, the new access would mean taking left-turning shopping centre-bound vehicles off Bayers Road, freeing up space for a transit lane and preventing vehicle back-up.

While the Bayers Road options seem uncontroversial (until, I suspect, the dollar figures start to roll out), the proposal for Gottingen Street is not.

Gottingen is a strange transit street, since the lion’s share of buses using it are express services in one direction only. There are 18 routes that run along Gottingen, and those routes move 28,951 riders a day, on average. (There are three Metro X routes headed to Porters Lake, Tantallon, and the airport. There’s an express bus to Bedford, and four routes headed to Clayton Park. The remaining nine routes are headed to Dartmouth via the Macdonald Bridge, and those routes move just over 21,000 riders a day, on average.)

So, that’s a lot of buses. But Gottingen Street is not necessarily well serviced, since most of those buses don’t run two ways. When they are headed south towards downtown, all the Dartmouth buses use Barrington Street. Why don’t they use it on the way back to the bridge, you might ask? Well, that’s because the ramp from Barrington up to the bridge was not designed to accommodate buses. (Apparently no one imagined we might be moving people collectively in large vehicles one day… Sigh.)

So that’s why, today, we are looking at putting in a transit lane along Gottingen Street headed in one direction only. And it’s also one of the reasons this proposal will be a lot more controversial than the Bayers Road transit lanes.

There’s also a commercial strip along Gottingen that will not be happy about losing on-street parking in front of shops. Remember when planners thought it was a good idea to add bike lanes to Agricola Street, but that plan would mean removing on-street parking? Think that, but with buses, a thing retailers seem to have even less value for than bikes.

In a sort of acknowledgement of the unique situation on Gottingen Street, the consulting engineers have also included “Other Options Being Considered” in their presentation to the interested public. Those options include a reversing lane for transit running down the centre of Gottingen Street, an option that at least gives a nod to a future where most buses run both ways on the street.

There’s also the option to actually figure out a way to use the Barrington Street ramp for buses heading to Dartmouth from Scotia Square (or a new Cogswell-redevelopment terminal). Apparently Halifax Transit is currently negotiating with the Bridge Commission for the opportunity to actually test the ramp. That’s a great first step. Unfortunately, the Bridge Commission has not shown a propensity to move fast on projects that can help move people on buses across the bridge faster. (Case in point, we are still waiting on that dedicated transit toll gate.)

Still other options to consider include using Brunswick Street and converting Gottingen to one way for all non-transit traffic, though those seem, to me, much more far-fetched.

Suffice it to say, a transit priority corridor on Gottingen is looking much more complicated and fraught with design, equity, and city-building issues than is Bayers Road. And while the Bayers Road proposals really do seem to go for the gold, with an overpass and bi-directional transit lanes, the Gottingen Street options seem to be planning for Gottingen as it is now, and not necessarily as we want it to be.

And now it’s your turn to weigh in. Let the city know what you think of these proposals at the Shape Your City site until October 16th.