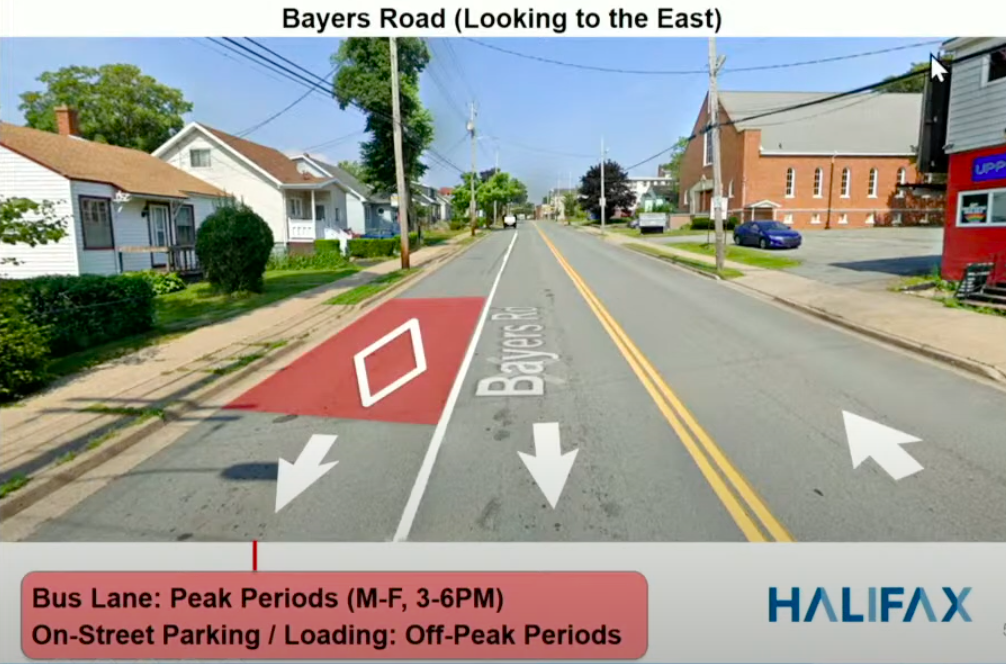 A screenshot from HRM’s presentation to the Transportation Standing Committee shows the plan for Bayers Road.

Halifax is installing an interim outbound bus lane on part of Bayers Road this spring while it continues to buy land for the permanent version.

At a meeting of council’s Transportation Standing Committee on Thursday, transportation planning manager Mike Connors presented the plan, scheduled for completion by the end of May.

The municipality has already built bus lanes on Bayers Road from Connaught Avenue outbound to Romans Avenue, near the on-ramp to Highway 102. That was Phase 1 of the project, completed in 2021. Phase 2 would see bus lanes added between Windsor Street and Connaught Avenue.

The final plan for Phase 2 of the Bayers Road bus lanes.

That second phase is scheduled to be completed next year, but buying up the land to widen the road is taking longer than anticipated. Connors said the municipality wants “to implement parts of that project” now, by adding a bus lane in only one direction without having to move the curb.

The outbound lane will operate from 3 to 6 pm Monday to Friday, between Oxford and Connolly streets, with on-street parking still available at other times. There’ll still be one traffic lane in either direction, and there’s no change to the inbound lane.

“What we’re planning to do this year is very much consistent with the ultimate plan in the outbound direction,” Connors said.

Aside from the lack of an inbound lane, the difference between the interim version and the ultimate plan is that the outbound lane ends at Connolly, rather than continuing to Connaught.

But it will allow some transit improvement.

Since 2018, Route 1 is has been detouring onto Roslyn Road between Oxford and Connaught at rush hour to avoid the traffic in the area.

“Not an ideal situation. It’s not a street that we want to have transit running on necessarily but it helps buses kind of maintain the reliability and stay with reasonable travel times,” Connors said.

The interim bus lane will allow the route to move back to Bayers, Connors said.

“Bayers Road has historically been one of our biggest and most troublesome pinch points,” Reage said. “So having the dedicated lanes between Connaught and then where they end by the 102 has made a significant difference and then this, Connaught back to Windsor, really kind of completes a lot of that picture.”

Other changes include restricting left turns from Bayers Road onto Oxford Street during rush hour, along with the extension of 12 ‘no stopping’ zones from 4 to 6pm to 3 to 6pm. The number of parking spaces won’t change. There are 48 spaces during off-peak times.

Connors said the municipality expects there to be some extra congestion on the street for other vehicles between 3 and 6 pm. That is part of the point of bus lanes, to encourage people to get out of cars and onto buses.

The changes don’t require committee or council approval, but staff wanted to keep the committee up to date on their plan. The committee voted to accept the report.

Though councillors received the report, it wasn’t posted online for the public, just listed “to be circulated” on the agenda. The Halifax Examiner asked for a copy and did not receive a response by 5pm on Thursday.