You are here: Home / City Hall / Halifax Transit gets real 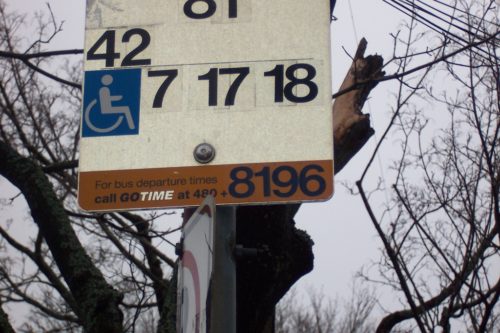 Confession: I hate GoTime. For years, it drove me nuts that my lack of a cell phone meant I couldn’t get on-street bus information. And then, once I got my first crappy Canadian cell plan, I begrudged spending my precious daytime minutes on basic schedule information. To make matters worse, GoTime was often off base.

Few things are worse than standing outside in the drizzle, with a dying phone to your ear, hearing, “The next bus on route… 10… is scheduled to depart in… one minute,” only to proceed to wait 20 minutes for the #10 to arrive.

So it is with great joy that I say goodbye to GoTime, and hello to real-time.

Halifax Transit has announced its new Departures line, going live on Monday May 16th with real-time bus information available to callers. Only three-quarters of our buses are fully equipped with the new GPS equipment right now, so the system will be”‘mostly” real-time until the remaining buses are outfitted sometime this summer.

Regardless, starting Monday transit riders can call 480-8000 for departure times. All existing GoTime numbers will redirect to the new system. After punching in the stop number printed on bus stop signs, riders will hear which buses are departing from that stop and when. You can check out the full how-to here. Until all buses are equipped, you’ll just have to pay attention to whether your bus is “estimated to arrive” at a certain time (using real-time data) or “scheduled to arrive.”

Real time bus information may actually save time for riders. A Seattle study found that both actual and perceived wait times decreased for people getting real-time bus info. So not only will people feel like they are waiting less, they actually will be waiting less.

Of course, knowing your bus is late doesn’t stop your bus from being late. (That’s what transit priority measures are for.) It does, however, mean you don’t have to wait as long at the bus stop. Instead, you can run an errand or stop to smell the flowers. Or at least stay out of the cold and/or rain. Time you would have spent in frustration at a bus stop is your own again. You can stay somewhere safe and warm until you know your bus is coming. That’s a big improvement for rider experience.

Real-time data should also vastly improve Halifax Transit’s own understanding of how its system works. Transit planners will have a play-by-play picture of where buses are being held up, and by how much. Not only will they be able to respond better to major disruptions (in real time!), but they will be able to plan better. In the war against late buses, knowledge is power. In this case, data is power, as long as Halifax Transit has enough staff working to analyze that data.

The only thing that could make this better news is if our new real-time data was being released as open data, for use by third parties like app developers and Google Transit. Apps have already revolutionized how many people take transit. I’ll go so far as to say that the trip planning capabilities of Google Transit actually make it possible for infrequent users like me get around by transit.

The wait for Google Transit users will be short. “Real-time reporting through Google Transit will be available within the next several months,” says city spokesperson Tiffany Chase, “but we are waiting until the system is fully installed and operational on the entire fleet.”

But for app developers like the local creators of the popular Transit 360, the wait will be longer. “Real-time information will not be available through open data as of yet,” says Chase, though they plan to do it eventually. “We are currently focused on getting the GPS system fully installed and operational, and introducing additional system functionality over the coming months, including a web-based Departures application and bus stop annunciation.”