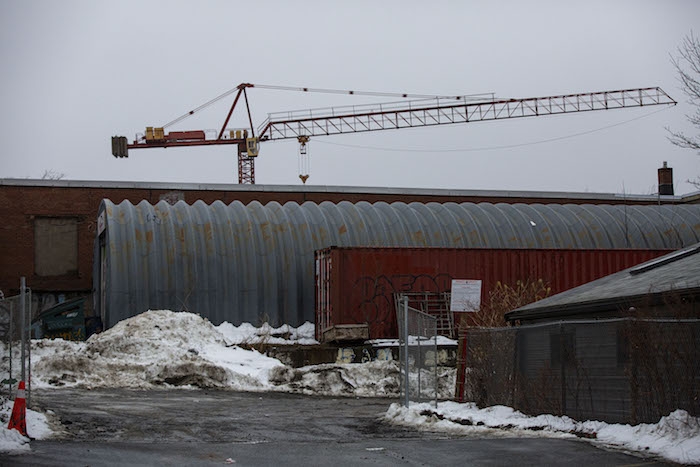 A crane is seen over Gottingen St. in Halifax on Saturday, Jan. 11, 2020. Photo: Zane Woodford

Halifax’s apartment rental vacancy rate has dropped to a new low of 1% — below that of Toronto, Montreal, and Vancouver.

The Canadian Mortgage and Housing Corporation (CMHC) released its 2019 fall rental market survey on Wednesday. The numbers represent privately-owned apartments in buildings with three or more units, based on an annual survey conducted in October.

Last year’s vacancy rate, 1.6%, was lower than it had been since CMHC started tracking this data in the late 1980s.

The plummeting vacancy rate has pushed average rent in Halifax up 3.8% to $1,113.

Here’s how it breaks down by unit type:

“These are very bad numbers for affordability and for the kind of complete communities we’re trying to build,” Coun. Waye Mason said on Wednesday.

“There’s no way around it. This really does emphasize that we have a housing crisis.”

In Mason’s district, the south end and downtown Halifax, CMHC says the vacancy rate dropped 0.7 percentage points to 0.4% — despite a 7% increase in supply.

Mason has been advocating for Halifax taking back the responsibility for delivering housing from the provincial government, with a report expected sometime in the next year. He said some provincial politicians have been blaming the municipality for the housing crisis.

“Not only are we building at an unprecedented rate right now, but we also have thousands of units approved going back seven, eight, nine years that aren’t even built.”

CMHC’s report says there are currently a record 4,000 units under construction in the city and there were more than 1,000 units completed last year, but the added supply isn’t meeting demand.

“Due to higher demand, the vacancy rate continues to drop, despite consistent growth in rental supply,” the report said.

The report attributes the increased demand, as it has over the past few years, to demographics. Seniors are downsizing and moving into rentals, unemployment is down, and interprovincial migration and international migration are up.

“Population gains from international migrants in particular, has been a significant factor contributing to higher demand for rental apartments in recent years,” the report says.

The one scenario Lovitt feels could ease the rental crunch is if newcomers start buying rather than renting.

“If you’re coming on a temporary basis or if you’re coming from another country, you might rent in the immediate term as you kind of find your feet, but a lot of people that do immigrate to Canada in general come with a hope or a dream of home ownership,” he said.

“That might be a bit of a saving grace for this rental situation.”

Lovitt said it’s “disconcerting” for people in the rental market to see Halifax’s vacancy rate surpass the levels seen in Toronto and Vancouver over the past few years.

“Now that we’re into sort of a similar or even tighter vacancy rate in Halifax, we can probably expect to see some more dramatic increases in rent across the board,” he said. “That really doesn’t bode well for the next couple years for renters.”

In terms of solutions, Lovitt said the provincial government can continue to hand out rental supplements to those in need — its preferred method of delivering housing — or it could increase social assistance rates, but those are only stop-gap measures.

“Ultimately, if you’re just subsidizing the demand, that’s just eventually going to filter down into the pockets of the building owners and operators,” Lovitt said.

The only long-term solution is to build housing.

“We have been fortunate in the last number of decades really in HRM to have the private market be able to deliver most of that,” Lovitt said.

“I think we’re getting to a point now where it’s not possible and the public sector has to step back in in a fairly significant way. And that’s pretty much the case across the country, in most major Canadian cities.”

“If we’re going to keep growing by 2% per year in terms of population that means that it will take a while for the market to adapt,” he said.

The Nova Scotia NDP issued a statement from Halifax-Needham MLA and housing spokesperson Lisa Roberts on Wednesday calling on the governing Liberals to step up.

“There are things the Liberal government can do that can help people find an affordable place to live,” Roberts wrote.

The NDP is calling for rent control, short-term rental regulations, and support for the development of non-profit, cooperative and public housing.