You are here: Home / City Hall / Halifax police board votes to strike committee to define defunding 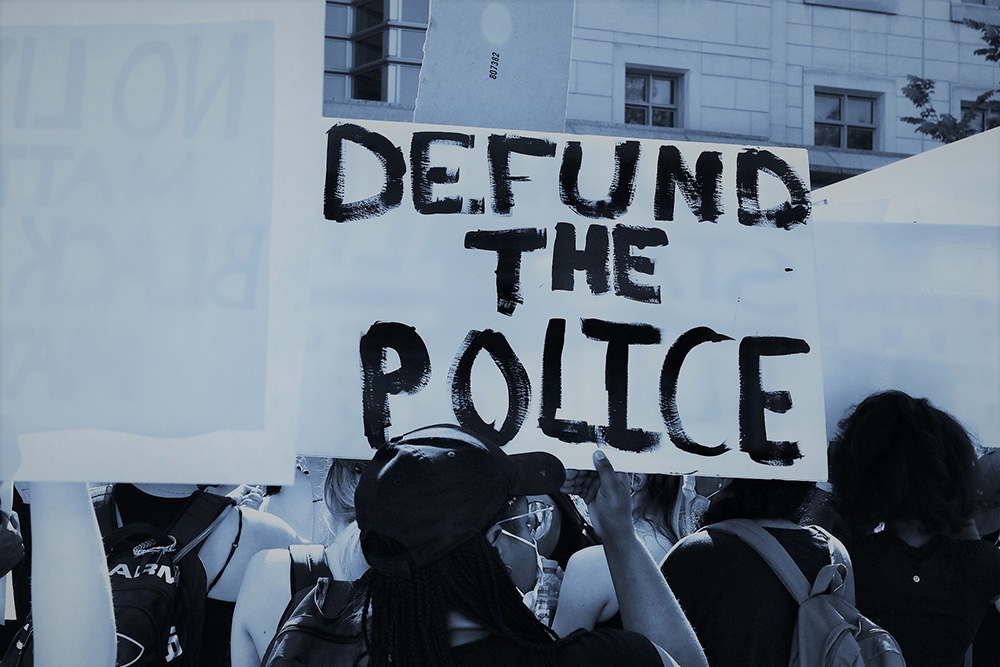 Halifax’s board of police commissioners will strike a committee to define the concept of defunding the police.

The board passed the motion at its meeting on Monday:

It’s a more refined version of a controversial first attempt by an unnamed municipal staffer, added to the board’s agenda the night before a meeting in early July:

Activists and commissioners alike were surprised to find that motion added to the agenda. Coun. Tony Mancini said Monday he was still “puzzled” how it came to be.

The second attempt at a motion replaced “adopt a definition” with “appoint a community advisory committee to provide a definition,” but Deputy Mayor Lisa Blackburn further amended it on Monday to add “core” policing functions.

Blackburn also wanted to add a line requiring the definition to comply with the provincial Police Act, but removed it after Halifax-district RCMP Chief Superintendent Janis Gray said the Police Act doesn’t apply to the RCMP. That was false. That act states that “while acting as the Provincial Police, the Royal Canadian Mounted … or other police department shall be under the general control and supervision of the Minister.”

Notwithstanding that mix-up, Monday’s meeting ended weeks of confusion and misleading assertions from board chair Natalie Borden and city lawyer Marty Ward, who argued the board had already passed a motion on appointing a committee. In fact, as Ward conceded on Monday, the board deferred a vote on such a motion at its meeting in early July to its next meeting, later in July.

Three meetings later, the board has actually passed a motion. Councillors Lindell Smith and Mancini were the only no votes. 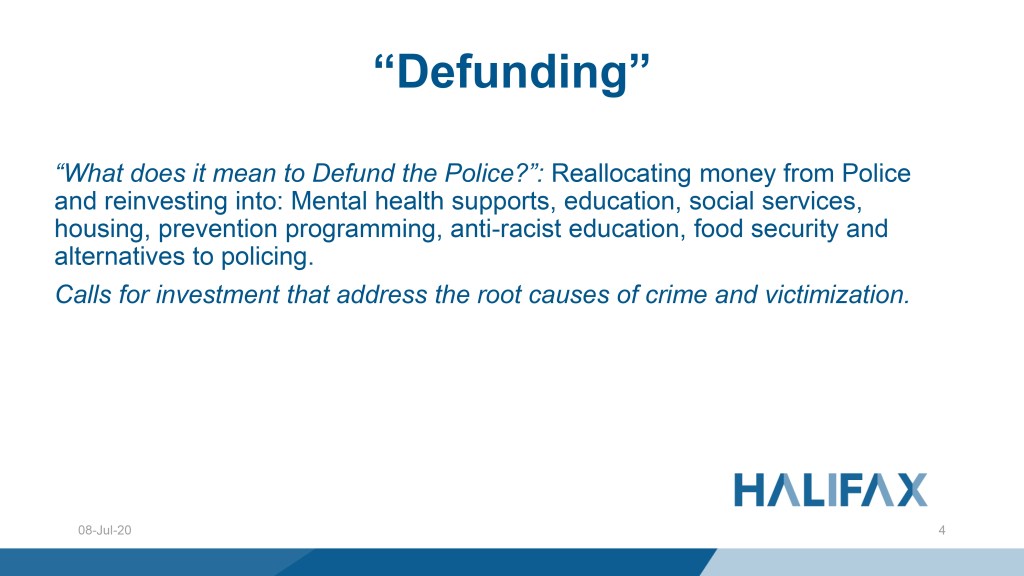 Smith argued the board already had a good working definition, from a presentation at that earlier July meeting by Public Safety Advisor Amy Siciliano and Youth Advocate Program manager DeRico Symonds:

“The definition of defunding is pretty easy to determine,” Smith said.

“I don’t support this because I really feel that we have a good definition, and what we should be focusing on is if the commission is deciding if we actually want to do that or not.”

Borden argued the board needs the definition in order to decide whether it wants to defund the police, and the motion passed.

Before the last meeting, the Nova Scotia Policing Policy Working Group said in a news release that Borden asked El Jones, a member of its steering committee and a columnist for the Halifax Examiner, to chair the committee. The release said:

This is far from being an abstract concern, especially in light of the last-minute addition to the agenda for the Board’s meeting on July 9, 2020: a motion to adopt a definition of “defunding the police” that would have included “police performing policing functions.” This illogical and circular definition was concerning to those of us calling for a critical examination of where the public money devoted to police might be better spent to keep our communities safe and well. Given that it was billed as a “staff motion,” it also remains unclear who drafted the definition, raising significant accountability concerns.

Presenter urges board to apply gender lens to arrest policy

The board heard a presentation Monday on the harm inflicted when women and children are arrested.

Prompted by two violent, high-profile arrests this past winter — of Santina Rao and Demario Chambers — Women’s Wellness Within chair Martha Paynter made a presentation to the board titled “Applying a Gender Lens to Arrest: A Call for Change.” 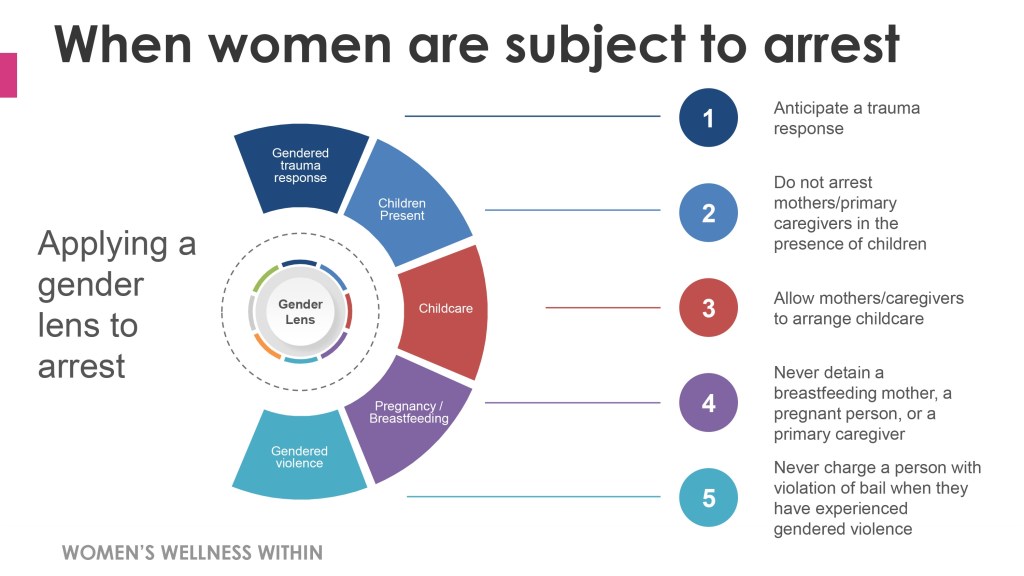 A slide from Martha Paynter’s presentation to the Halifax board of police commissioners on applying a gender lens to arrest.

Paynter detailed the risks of arresting people with their children present and detaining breastfeeding women, among other issues. She told the board she’s been trying to work with the police on a breastfeeding policy since 2016, when police in Saskatoon detained Lillian Desjarlais, a young mother who was breastfeeding her four-month old baby, for three days.

She was held in custody for 75 hours, over the weekend, without access to a breast pump. She said her breasts became painfully engorged and started leaking, and her milk eventually turned a bit greenish. She was forced to wear wet clothes.

But Paynter said police have not made these policies a priority, despite cases like that one and her repeated requests for new policy.

Chief Dan Kinsella told the board on Monday that the department has been working with Paynter, but that more work has to be done.

Paynter noted that Canada adopted the United Nations Rules for the Treatment of Women Prisoners and Non-custodial Measures for Women Offenders, known as the Bangkok Rules, in 2010, but reality in jurisdictions across the country still doesn’t reflect those rules.

Board makes request for police policies to be made public

The board voted on Monday to ask Halifax Regional Police and the RCMP to consider posting their policy documents online, but it’s unclear if or when that will happen and how much of the policies will be redacted.

The motion from Blackburn requests that HRP and RCMP consider making “available to the public, via the website, their policies.”

“I really think that as a service to the public, the public needs to know and deserves to know what to expect in these situations when dealing with police,” Blackburn said.

Blackburn pointed to Vancouver as an example of what she’d like to see here. The Vancouver Police Department has its policy manual, with some redactions, posted online.

In order to debate Blackburn’s motion, the board had to vote to suspend a rule that restricted debate on another motion on legal representation at recent meetings. The rule means councillors or commissioners need a staff report before voting to take action. The board voted unanimously to debate the motion without a staff report, and then voted unanimously in favour of the motion.

But it was a watered-down version.

The motion originally specified which policies Blackburn was looking for — “including but not limited to: information on Conduct of Service Members, Conflict of Interest, Complaints and Use of Force policies” — but Borden decided that wording should be removed. Borden also proposed that the motion be changed to make consideration of making the policies public part of a review that’s underway, and Blackburn agreed.

Kinsella said the full policy manual is more than 1,700 pages long, and he’s in the process or reviewing and updating it. “Frankly, it does require an overhaul,” Kinsella said.

Kinsella said parts of the manual would have to be redacted, and that would be a time-consuming process.

The Halifax Examiner recently requested a number of HRP policies through a freedom of information request, including those governing arrest, cells and use of force. The police denied the request for use of force policies, citing officer safety.

Blackburn asked Kinsella on Monday about another recent freedom of information request from the Halifax Examiner.

Last month, the police quoted the Examiner $40,000 for five years worth of data on the cells at HRP headquarters.

Kinsella said he’d read our story, but didn’t have all the details of the breakdown of fees. He said freedom of information requests are often time-consuming and mean “physical work,” which can lead to high fees.

Blackburn asked whether the files are in a filing cabinet and need to be sifted through. Kinsella confirmed they are digital, but said they can’t be easily downloaded.