You are here: Home / City Hall / Halifax police board asked to make policy on encampment enforcement

Chief Dan Kinsella has said it many times now: Halifax Regional Police won’t remove people from parks if they have nowhere to go.

“We’re not looking to take anyone out of a park, or even to issue a fine. That’s not what we’re looking to do,” Kinsella said on Wednesday.

But until it’s a formal policy, Robin Tress won’t believe it.

That’s because in May, after the municipality had already claimed it wasn’t doing so, Tress saw the police kick an unhoused woman out of a park in Dartmouth.

“It was 8am, there was no garbage around, there was no conflict happening, there were no people around except me, and yet the police came and asked her to take her tent down immediately,” Tress told the Halifax Board of Police Commissioners at its meeting on Wednesday.

Remembering what happened last August, when police pepper-sprayed and arrested protesters standing between them and emergency shelters, and having seen police treat people badly before, Tress stuck around. 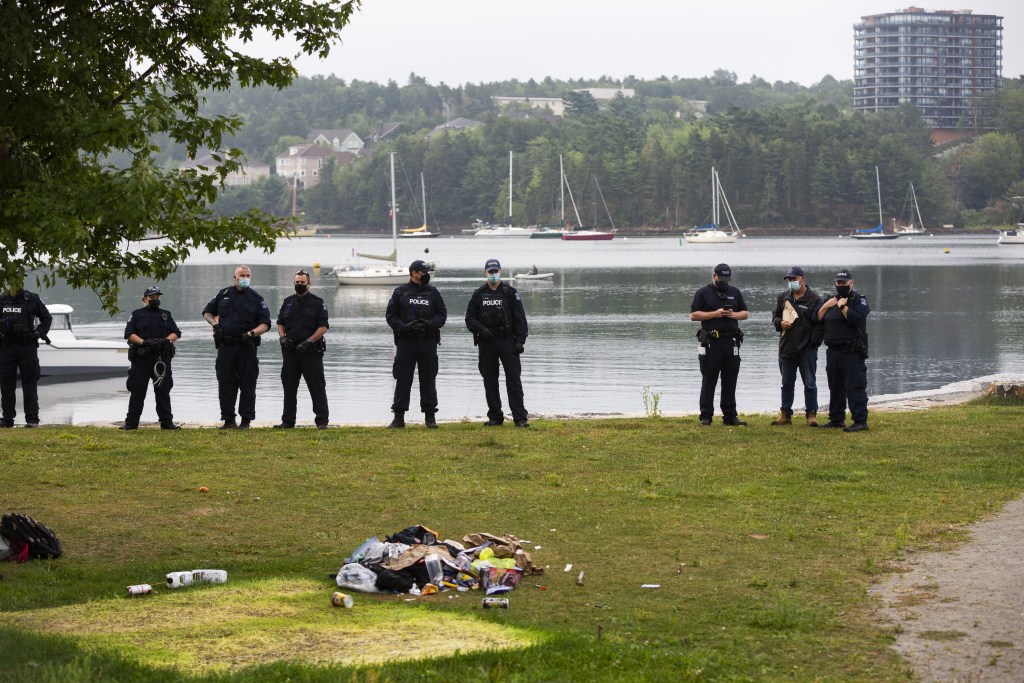 “While these particular police officers were not using any rude language or angry tones, I still think that this interaction was really degrading and deeply harmful,” she said.

Tress said she asked the officers to give the woman some space, rather than hovering over her as she dismantled the tent. They declined.

The officers had no housing options to offer the woman, Tress said.

“They were simply instructed to make her take the tent down and that’s it,” Tress said.

“I find this part especially troubling … we’ve all heard public statements from the mayor and various councillors, committing to ensuring that all unhoused people will be connected directly with real housing options before they be displaced. That’s not what I saw happen on May 18.”

Tress requested the opportunity to present to the board to ask for a policy on the police response to people sleeping in tents in parks. At the time of her request, it had nothing to do with Meagher Park, or People’s Park, as its known to residents living there. But the presentation came with extra significance on Wednesday, a day after the municipality issued eviction notices there and announced it’s clearing and then restoring the park as of July 17.

Letters distributed there on Tuesday threatened fines of up to $10,000 or arrest if people didn’t move themselves and their belongings by that deadline.

“It never ceases to amaze me the ability of this municipality to invent new ways to criminalize unhoused people and strip away their dignity,” Tress said.

“It’s really incredible. Until yesterday, I didn’t know that you could get renovicted from a park.”

“What it should do is formalize what I think everyone’s been saying, is that there’s this intention that no one wants to displace people living in tents before there’s a real option for where they should go and where they can live and real connections to housing,” Tress said.

“And so I’m asking for that to be formalized in policy because so far we’ve only heard it said in statements, but it’s not a formal policy that anyone can be held accountable to.”

Following Tress’ presentation, Commissioner Harry Critchley moved to request a staff report from HRP and RCMP to “outline all policies, procedures, and other operational guidance provided to officers” related to enforcing bylaws and the Protection of Property Act at municipal parks where people are sleeping in tents.

The reasoning for Critchley’s motion, posted online, cites court decisions in Toronto and two BC cities concerning the application of the Canadian Charter of Rights and Freedoms to encampments. The same Charter considerations apply to HRM too, Critchley argued.

“The basic proposition that is developed through this case law is that it breaches section 7 of the Charter rights of individuals living in parks to remove those individuals from parks where there’s not otherwise an accessible place for them to go,” Critchley said.

Critchley argued that means if there are no available shelter beds, clearing tents from parks in unconstitutional. In HRM, there are about 200 shelters beds and more than 600 people on a by-name list looking for housing.

“Concerns relating to whether enforcement action taken is in compliance with the Charter, and particularly Charter section 7, I would suggest that’s within the board’s mandate, to the extent that the board has a duty to ensure the delivery of policing services is in keeping with community values,” Critchley said.

John Traves, HRM’s executive director of legal services, argued that whether the police are acting in accordance with the Charter is not the board’s problem.

“Those are concerns for the administration of HRM,” Traves said.

“They are the considerations that the executive director of parks must be satisfied with before proceeding. They’re not within the board’s power to assess or make a decision on with respect to the call.”

Traves said it’s no longer safe for people to live in Meagher Park, and so the municipal executive director of parks and recreation, Maggie MacDonald, has made the decision to “uproot folks” from the park. He referenced five residents remaining in the park, but it’s unclear when that count was taken and the population there is known to fluctuate.

There may be value in a staff report, Traves said, but it won’t “tie HRP’s hands.” He ultimately argued there’s no need for the staff report, and the minutes of Wednesday’s meeting would serve the same purpose.

But the board sided with Critchley, moving for an amended version of his motion that called for staff reports from both HRP and RCMP.

Kinsella confirmed there is no policy pertaining to encampments, and conceded there may be value in such a policy. The staff report, assuming it’s completed, should still outline “operational guidance provided to officers” on the issue. He wouldn’t commit to a timeline on the report.

Insp. Jeremie Landry, acting chief officer for Halifax-district RCMP, said there was a directive issued to Mounties in HRM last fall that they shouldn’t remove anyone in a tent from a park.