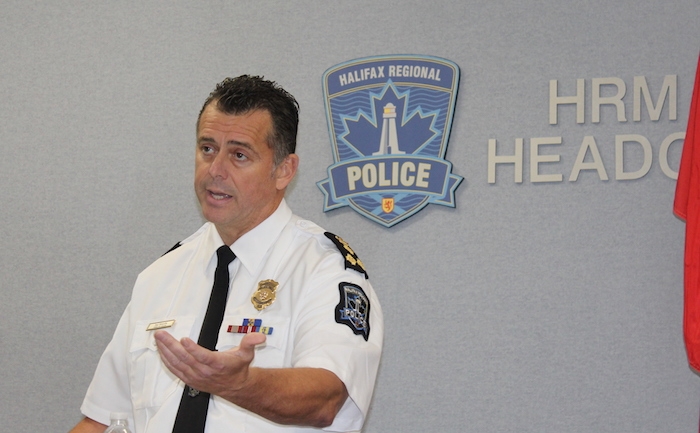 The city’s board of police commissioners is recommending in favour of a $5.5 million cut to the Halifax Regional Police budget.

Chief Dan Kinsella told the board this week that there will be no impact on public safety from the reduced spending, about $4 million of which comes from keeping 28 positions vacant, but there will be work that goes undone.

The board approved the recommended budget at a meeting on Thursday, sending it up to Halifax regional council.

On Monday, the board deferred a vote on the budget, recommending that Kinsella consult with the union representing his officers, the Halifax Regional Police Association. Union president Sgt. Dean Stienburg sent a letter to the board before Monday’s meeting posing a series of questions about the budget.

Stienburg asked the board whether the municipality was using reserve funds to offset cuts; whether it was aware of staffing changes — the disbanding of specialized units — designed to ensure emergency response was maintained; whether it authorized “overstaffing of senior management positions;” whether fleet and records management upgrades are necessary this year; whether the new positions approved by the board were still accounted for; and what other areas would be examined before resorting to staffing changes.

Not all of those questions were answered on Thursday, but Kinsella said he’d had “several conversations” with Stienburg since Monday.

“Most notably, the HRPA is concerned about the impact of not filling the positions, from a workload perspective and for overall delivery of policing in various areas,” Kinsella told the board.

Kinsella said most the union’s suggestions could be useful in the future, but there wasn’t enough time to implement them now.

A few of their suggestions were nonstarters for the chief. Police have no access to the city’s reserve funds, he said. Another suggestion, to cut from the capital budget for fleet and records management upgrades was discussed in the initial stages of rebuilding the budget, Kinsella said, and it was decided they couldn’t be cut.

“Both are critical to how we do business,” he said.

The union also suggested encouraging early retirements to replace some of the highest-paid, longest-serving members with new hires, but Kinsella said there’d be a ripple effect across other unionized municipal departments.

Kinsella’s meetings with Stienburg didn’t change his recommendations, and he reiterated his comments from earlier in the week.

Mancini told Kinsella he doesn’t think police or fire should have to cut their budgets so deeply.

“I know chief, it’s not your desire to cut your budget by 5.5 million bucks, but I can’t support any budget that has us cutting to that extent,” he said.

“I hear from my residents and they’re telling me, during a health crisis right now, cutting emergency services is not what we should be doing.”

The board’s motion passes the budget along to council with a recommendation to go through with the full $5.5 million cut. It also recommended that council talk to the RCMP to see whether they could reduce their budget, which hasn’t been cut.

Council will likely get to the police budget discussion next week, and it passed a motion on Wednesday that would reverse about $4 million of the cuts.