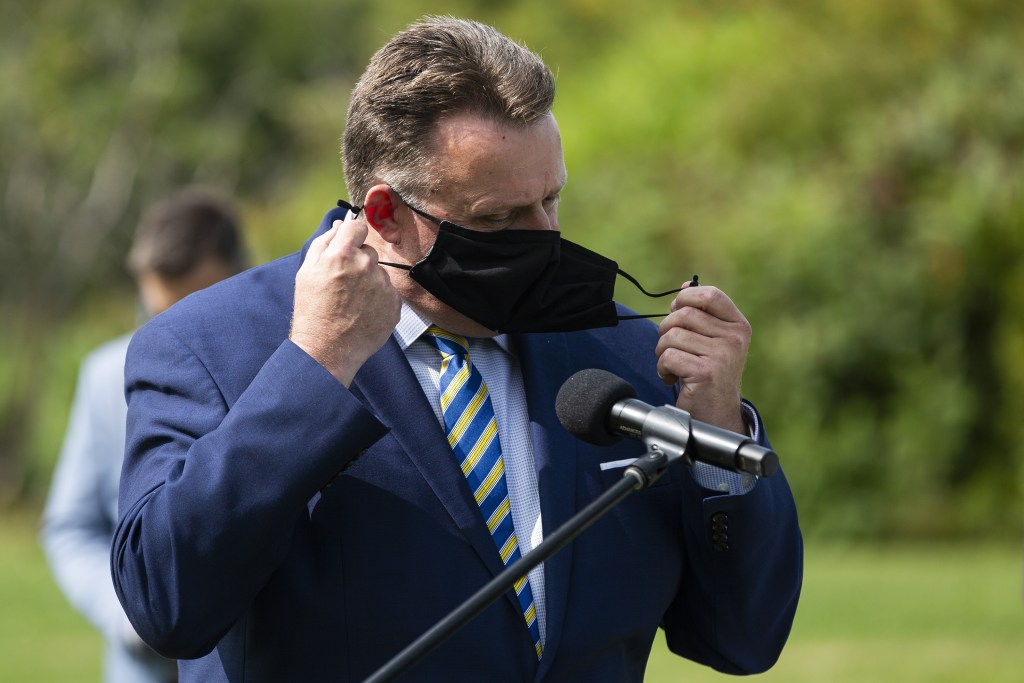 Mayor Mike Savage removes his mask as he approaches the podium at his re-election campaign launch at Africville Park in Halifax on Tuesday. — Photo: Zane Woodford

Mayor Mike Savage launched his re-election campaign Tuesday, selling himself to voters as a consensus-building leader focused on issues like racial justice and affordable housing.

The 60-year-old two-term mayor is the clear frontrunner in a three-way race for the mayor’s chair, up against Coun. Matt Whitman and Max Taylor, a newcomer to politics. The only publicly-released polling conducted so far put support for Savage at 89% among decided voters.

With little over a month to go before Election Day on Oct. 17, Savage’s campaign team held a physically distanced event, mostly for the media, at Africville Park with about a dozen supporters.

Irvine Carvery, president of the Africville Genealogy Society, introduced the cast of speakers ahead of Savage, saying he believed it was the first major campaign launch to be held in an African descendent community in Nova Scotia. 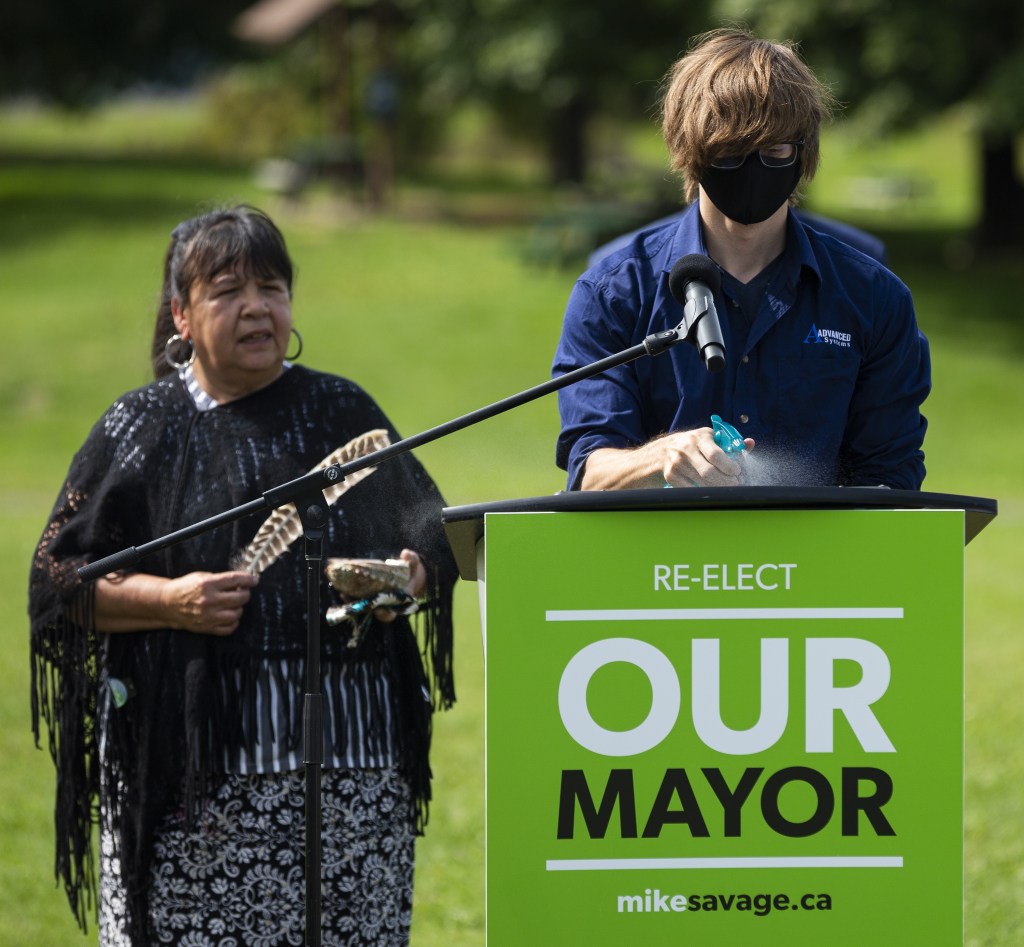 “He has demonstrated, he has taken a knee, and he knows the frustration of people of community like Africville, who have endured racism. He understands that systemic racism is not the shark, it’s the water,” Howe said.

Savage’s other campaign co-chair, Chris Lydon, touted the former Liberal member of parliament as a consensus builder across political lines.

“Many of us come together from varying walks of life, from different partisan hues,” Lydon said. “We are community activists, we are business leaders, we are Conservatives, Liberals, New Democrats, and Greens. We are small business people, we are students and parents, we’re innovators, we’re digital influencers, we are seniors and we are youth. But for Mike, we put aside our partisan colours, and we join together under a community banner.” 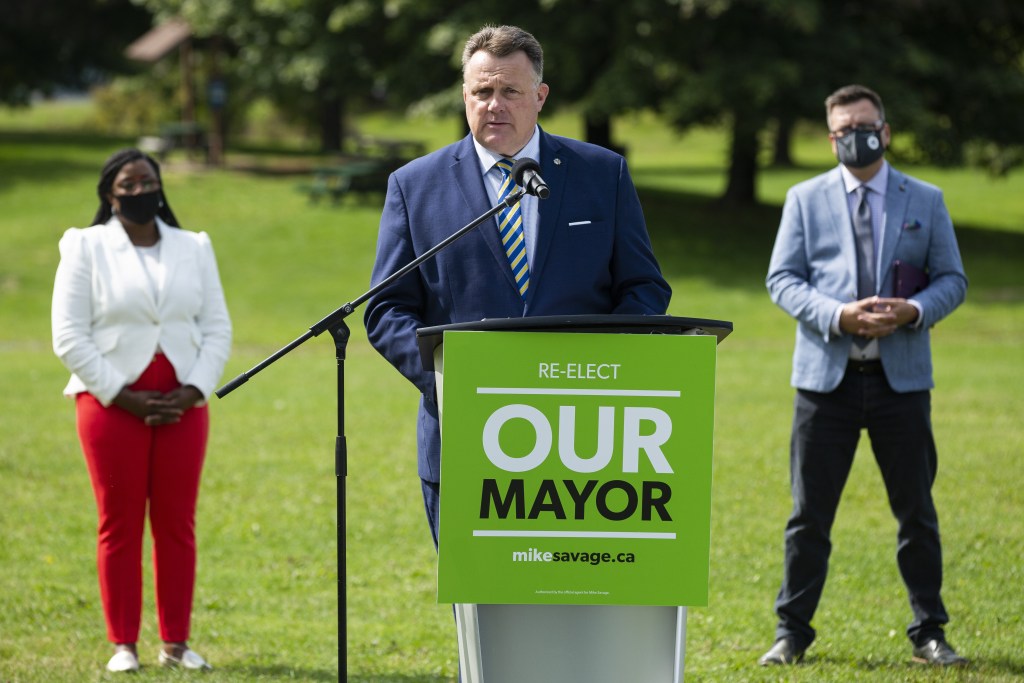 “He’s listened to us as a community group, and we represent people from across all of HRM. The entire municipality values this,” Whalen said.

Whalen noted issues have come up at council around Blue Mountain–Birch Cove Lakes multiple times this summer, and the votes have been unanimous.

Savage’s speech touched on his record of ushering in a new era of development; the municipality’s response to COVID-19 and the city’s resilience, linking the pandemic to the Halifax Explosion; and its response to the climate crisis with the recently adopted HalifACT 2050 plan. There was a significant focus on racial justice in Savage’s comments.

“We cannot ignore our own struggles with anti-Black racism in this community especially as we stand here on this hallowed ground,” Savage said from Africville, pledging to work to combat racism.

“Individually and collectively we have a responsibility to know it, to own it and to eliminate it.”

Under the heading “Supporting Black Lives Matter” in his platform, posted online on Tuesday, Savage highlights what he views as his accomplishments on addressing racism: the establishment of the city’s diversity and inclusion office; the work of Halifax Regional Police in implementing the recommendations of the Wortley report into carding; council’s recent recognition of the United Nations International Decade for People of African Descent; and council’s decision to cancel the purchase of an armoured vehicle for HRP. 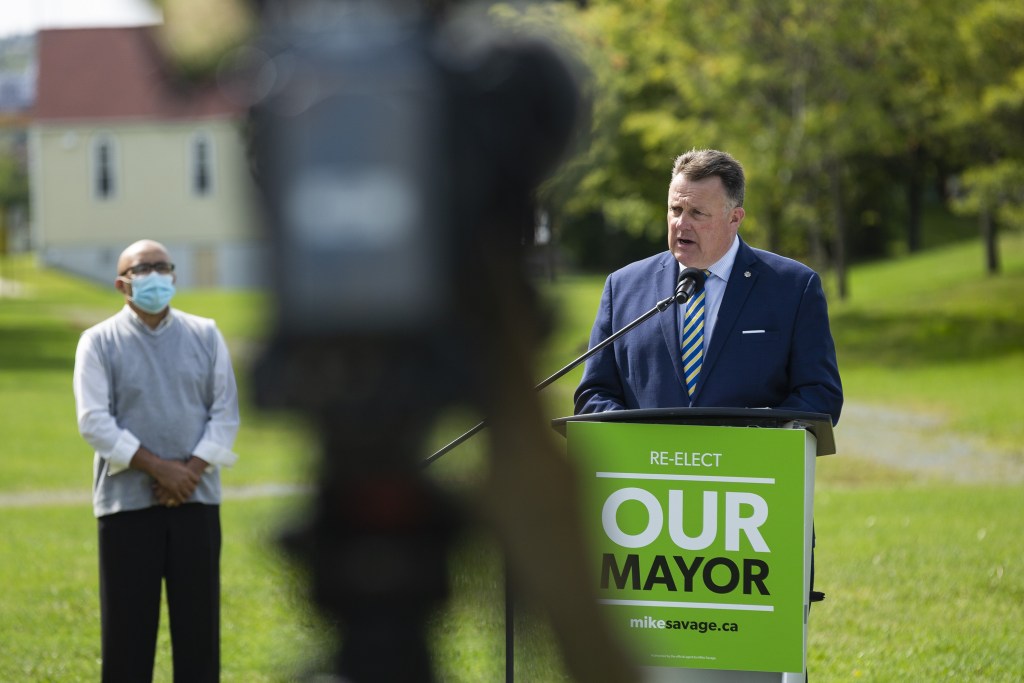 Mayor Mike Savage speaks during his re-election campaign launch, with Irvine Carvery, president of the Africville Genealogy Society, and the Africville Museum behind him. — Photo: Zane Woodford

In the future, he pledges to strengthen the diversity and inclusion office; re-establish the work of the clerk’s office in increasing diversity among municipal candidates; ensure public progress reports on the implementation of the Wortley report recommendations; and work “to ensure the full story of Africville is told and honoured.”

On housing, Savage noted the city’s Housing and Homelessness Partnership with the United Way — a program that has failed to meet its target of 5,000 new or preserved affordable housing units in five years.

He also made some specific commitments:

In addition to requiring affordable units in new construction, we will now allow back yard suites, support the conversion of under-utilized commercial space to housing, and creating a housing trust to aid community partners in building affordable options.

Asked in a scrum after his speech about requiring affordable units in new construction — something the city asked the province for permission to do, and was denied — Savage said he was referring to the density bonusing provision in the Centre Plan, where developers have to pay into an affordable housing fund to max out their development rights. That plan only applies to the regional centre.

Savage said he’s not sure the city can incentivize the conversion of commercial space to housing, but he wants to work with the other levels of government.

On the housing trust, Savage said the details still need to be worked out, “but I think we need to find a way that we can contribute direct money to work with organizations, not-for-profits and others, where we actually provide direct support to them.”

Savage said he wants to move past the idea that social issues like housing are the provincial government’s jurisdiction.

“I think it’s really time to get out of the issues of jurisdiction with other orders of government and find solutions to housing that make a real difference for people,” he said.

Asked if he’s willing to go to bat for the city and fight publicly with the province on issues around housing or transportation, Savage said he thinks council has worked well with the province.

“I don’t think it’s a matter of fighting. We’ve achieved pretty good results working with the province,” he said, pointing to the fact that the provincial government recently started providing some transit funding to HRM, $2 million a year.

“There’s ways to get stuff done. We don’t have to fight with the province, but I do think you need to be able to say, ‘Let’s not worry about the jurisdiction. Let’s fix the problem, identify the scope of it, and figure out how we can all play a role.’ Some of that will cost us money and some of that will actually save us money.”