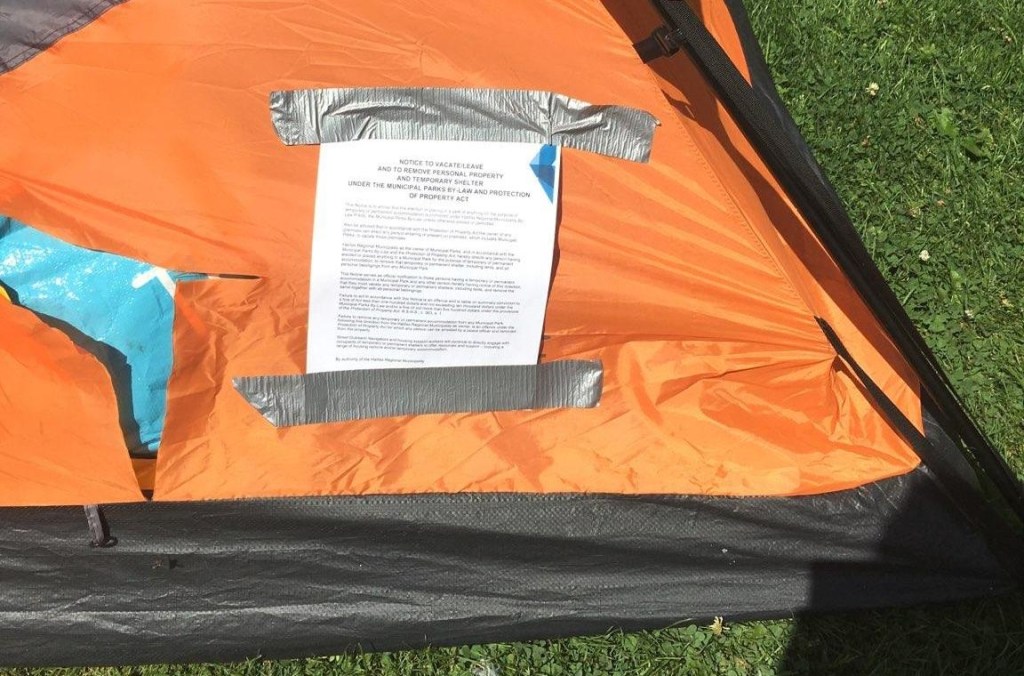 An eviction notice duct-taped to a tent in a municipal park in Halifax. — Photo: Halifax Mutual Aid

Halifax is threatening to evict people living in tents from municipal parks, signalling a return to the crackdown on the city’s unhoused population that was abandoned last month.

On Monday, the municipality posted notices on tents and delivered them to residents telling them to remove their tents and belongings from parks.

“Failure to remove any temporary or permanent accommodation from any Municipal Park following this direction from the Halifax Regional Municipality as owner, is an offence under the Protection of Property Act for which any person can be arrested by a peace officer and removed from the property.”

Halifax Mutual Aid, the anonymous group that built the plywood and house wrap-clad shelters in city parks, tweeted about the notices on Tuesday.

“@hfxgov has been sending police & bylaw officers to serve eviction notices to people living in crisis shelters & tents. Some were told directly that forcible evictions could begin today. Others just found notices duct taped to what little shelter they have,” the group tweeted.

It tweeted a few of the notices, saying one was delivered directly to a resident.

“They are now scared that the police will attack them – and rightly so. It happened recently in Toronto. It’s happening across the USA. And now it seems that @hfxgov is ordering the violent removal of homeless people in HRM,” the group tweeted.

The group is familiar with these notices. They were posted on the shelters they placed in HRM parks earlier this summer. After a few shelters were removed from parks days before the stated deadline, the municipality started backtracking in the face of public pressure.

“So @MikeSavageHFX & @hfxgov Councillors are doing the opposite of what they promised & using violence to tear away what little shelter & safety people forced onto the street have,” Mutual Aid Halifax tweeted on Tuesday. “But what comes next? Where do they expect these hundreds of people to go?”

Asked for an interview on Tuesday, Savage declined through his chief of staff, citing the council meeting underway.

The Halifax Examiner asked the municipality’s communications department why people are being threatened with arrest and whether they’ve been offered shelter.

In an emailed statement that matches one sent from chief administrative officer Jacques Dubé to citizens hours earlier, spokesperson Laura Wright confirmed the notices went out on Monday.

“The first step in enforcement is always education. Further to the ongoing engagement with tent occupants by community outreach workers to offer services and support, municipal staff have made a concerted effort to advise tent occupants on municipal property that they must remove their tents immediately,” Wright wrote.

“If attempts at education prove to be unsuccessful, the municipality will have the ability to use the enforcement options. The enforcement approach is not preferable, however, it may be warranted depending upon the associated risks.

“At this stage we cannot speculate as to whether or not further steps will be necessary; however, we are hopeful that, in collaboration with the province and community-based partners – including Street Outreach Navigators and housing support workers – occupants will accept the supports offered to them, voluntarily vacate and remove their belongings from the parks.”

The municipality claims “supports and services” have been made available for all residents, including temporary accomodation.