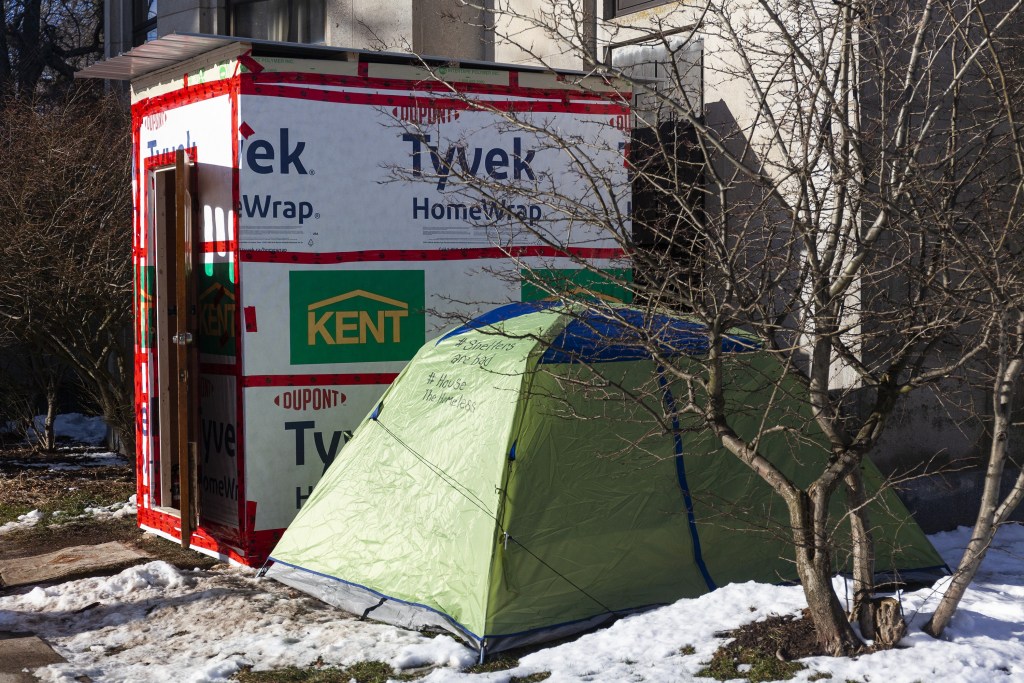 One of Halifax Mutual Aid’s shelters, along with a tent, next to the old Halifax Memorial Library in January. — Photo: Zane Woodford

Halifax hired a consultant to train its employees on “empathy-based approaches to homeless encampments” before announcing it would evict homeless people from their encampments.

As the Halifax Examiner reported earlier this week, Halifax has given people living in shelters on city land, built by Halifax Mutual Aid, one week to get out before it’s going to remove them itself. Halifax Mutual Aid, an anonymous volunteer organization, said it can’t “in good conscience put people in a worse situation than they are currently,” and won’t remove the shelters.

Since the shelters first went up around the city in January, the municipality has said it will find alternative accommodations for people living in the structures before removing them, but that they won’t allow them to be there indefinitely.

On Thursday, the Examiner learned that Halifax hired a consulting firm to train its employees on the encampments.

“The municipality hired the consulting firm, OrgCode, which specializes in empathy-based approaches to homeless encampments, to provide some training sessions for municipal staff and social service providers,” spokesperson Erin DiCarlo confirmed in an email.

In an interview Thursday, Halifax Mutual Aid external spokesperson Campbell McClintock said the consultant fees are further evidence the municipality is taking a “top-down” approach to the issue.

“It just feels like all this is happening in the backroom and there’s absolutely no stage where any councillor is consulting the people living in the shelters,” McClintock said.

“We are catalysts for better outcomes. Hip and nerdy, we are the antidotes to the status quo across the multi-disciplinary skill set of the team. OrgCode excels in strategy, planning, training, research, community engagement, and positive social change,” reads its bio.

Among the webinars offered by the company this year was one titled, “Encampments: Understanding What they are and how to effectively engage.”

“This fast-paced 90 minute sessions provides all the core information needed to understand encampments, collect appropriate data and assess encampments, address risks within encampments, and how to remain focused on housing and service solutions during the planning, mitigation and closure phases when an enforcement body wants or needs to bring the encampment to an end.”

The Examiner requested an interview with the company’s president and CEO, Iain De Jong, hoping to learn more about the training the company provided to HRM, and how he feels about the municipality’s plan to remove the shelters.

We’ll update this post when we receive a response.