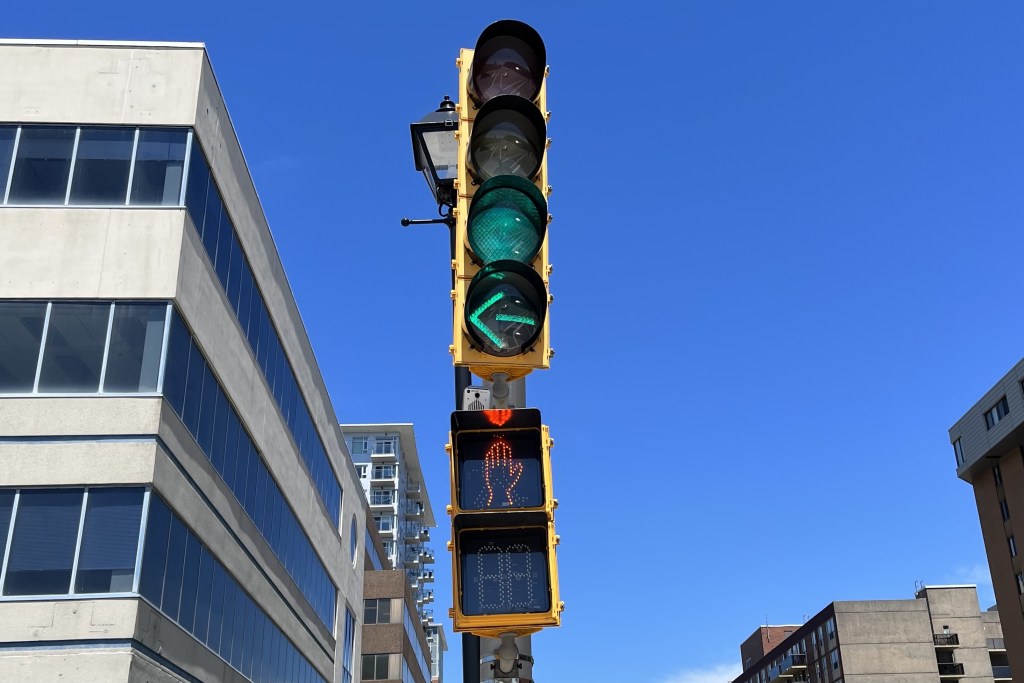 New turn signals at intersections in Halifax could protect pedestrians from careless drivers, but the municipality’s engineers aren’t willing to risk added congestion to make it happen.

Last year, Coun. Waye Mason moved for a staff report, “to be completed prior to the start of 2022/23 budget discussion, that outlines options for a program for establishing protected left-turn movements and protected right-turn movements at signal controlled intersections.”

Mason brought the motion forward in the wake of the death of 75-year-old Dr. David Gass at the intersection of Kempt Road and Young Street. A pickup driver, who was ticketed for failing to yield to a pedestrian, was making a left turn from Kempt onto Young, and hit Gass, who was crossing Young. As the Halifax Examiner reported at the time:

The incident has galvanized activists fighting for safer streets, including Martyn Williams of Kjipuktuk (Halifax) Safe Communities for Everyone.

Williams had been working on a proposal for the municipality since a driver making a right-hand turn hit and killed a pedestrian in Dartmouth, Kathy Warren.

“And then the horrific incident happened last week, and I wasn’t really finished, but I just kind of shoved my proposal to councillors and said, ‘This really needs to be looked at urgently,’” Williams said in an interview Friday.

The proposal makes the case for better protecting pedestrians at intersections — restricting turning when people are crossing.

Mason said the “tsunami of anger” on social media over Gass’ death is “entirely justified.”

Budget discussions ended in March, and the late report came to the Transportation Standing Committee ahead of its meeting on Thursday.

Municipal traffic services supervisor and engineer Jill Morrison recommended councillors direct the chief administrative officer to “prioritize evaluation” of protected-only left turns at some intersections and protected left and right turns at others, and identify how much that’ll cost.

Protected only left turn signal operation occurs where the left turn vehicle movement can only proceed with a flashing green arrow. Once the protected phase ends, drivers wishing to turn left face a red signal and are not allowed to proceed until the next protected phase. With this type of operation, the pedestrian crossing phase still comes on with the parallel through traffic movement, but no left turns are permitted to happen. This type of signal operation is typically used where there is significant demand for the left turn movement and dual left turn lanes are in place or where there may be an unusual intersection configuration.

Half of the vehicle-pedestrian collisions causing injury or death in the municipality since 2018 happened at signalized intersections, Morrison wrote in the report, so there’s potential to save or at least improve lives. But the change could be expensive to implement, the engineer warned.

“A program to implement protected only left (and/or right) turns at signalized intersections would involve significant staff and budgetary resources given the level of analysis and design required depending on the location,” Morrison wrote.

The report recommends allocating a full lane to left turns at any intersection where they’re to be protected.

“The cost of modifications would increase significantly for intersections where new signal equipment is required and each approach requires substantial construction, as well as land acquisition for road widening,” Morrison wrote. 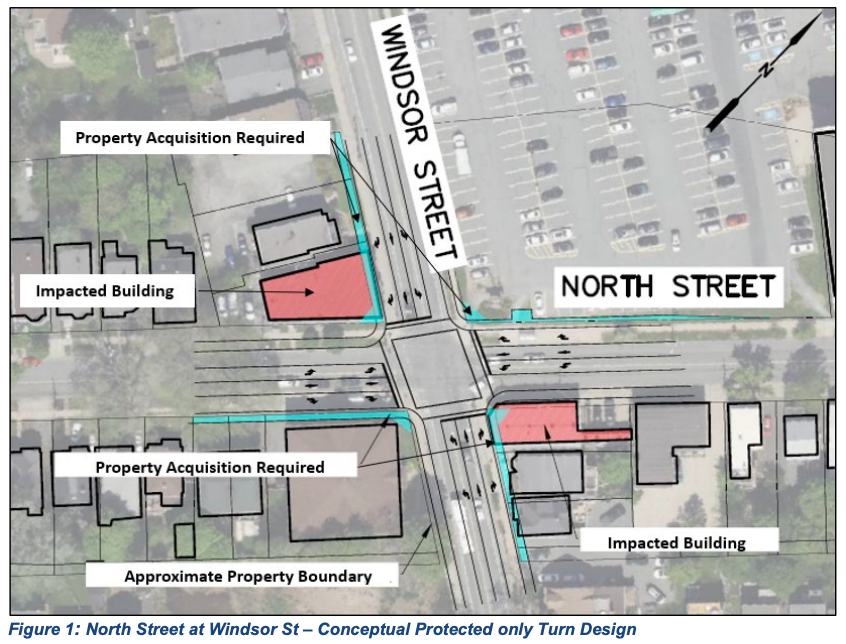 Staff say North and Windsor would have to be redesigned as shown to implement protected turns. — Screenshot/HRM

At North and Windsor streets, for example, Morrison estimated the cost could be more than $1 million.

Morrison’s report includes a list of intersections where HRM will consider protected turns:

There’s no consideration given in the report to changing the signals without widening lanes, something Mason found confusing.

“There’s a real focus on having to re-engineer the roads to make three lanes to do right, left, straight,” Mason said during Thursday’s meeting.

Across the country, Mason said he’s seen lots of examples of intersections with protected turns and no turning lanes.

“What I see in other cities … is you can’t go straight because the guy in front of you is turning left and it’s not wide enough. And that’s just how it is,” Mason said.

“What I read in the report is we’re not willing to do that. So I’m just trying to unpack that because I don’t understand how we landed there.”

Municipal engineer and deputy traffic authority Roddy MacIntyre said if HRM was to protect left turns at some intersections, it could mean that “congestion gets to the point where it goes beyond what we’re willing to accept.”

“We’re not necessarily saying that the only way we could do anything at all is widening the intersection. What we’re saying is in some instances, in order to be able to maintain some semblance of capacity in the network, some locations would require widening to separate out the movements,” MacIntyre said.

MacIntyre said if traffic is too congested, people get angry.

“Some of these changes, if they’re not done properly, they can actually be relatively catastrophic,” MacIntyre said. “And what happens is now you’ve got a lot of people making bad choices because they’re very frustrated with being held up and that’s what we want to avoid.”

Mason said he wasn’t comfortable with those answers, but he also didn’t want to hold up implementation. The motion passed unanimously.

Brad Anguish, executive director of HRM’s Transportation and Public Works, said he understood the way Mason was interpreting the report, but it’s a “complex,” “situational” topic.

“It’s a very difficult report to edit because it’s not a one size fits all situation,” Anguish said. “But I do want to just emphasize the spirit of what we are saying is we do consider this to be an urgent matter, and we are moving forward with it and we’re trying to shape it to give council the confidence that we’re doing that.”

During a presentation earlier in the meeting, Williams, of Kjipuktuk (Halifax) Safe Communities for Everyone, noted HRM already has intersections where it’s implemented protected turns without widening the road. It’s one of the intersections on the list for consideration — Dunbrack Street and Lacewood Drive. Williams said the lights are set up there so that a pedestrian can cross Dunbrack completely before the light turns green.

Williams suggested there was a lack of research backing up Morrison’s staff report, and he called on the committee to initiate a review of the municipality’s 2018 Strategic Road Safety Framework to evaluate the success of the plan so far. No councillor moved for such a review.

Also during Thursday’s meeting, councillors recommended in favour of a new administrative order (AO) governing the use of crosswalk flags in the municipality. That new legislation will allow the volunteer-installed flags to be placed at nearly any intersection without traffic lights or an all-way stop. The AO also creates clear guidelines for the placement of the flags, like where on a post they’re supposed to go, and when they’re to be removed.

Norm Collins, president of the Crosswalk Safety Society of Nova Scotia, was happy with the administrative order.

“We’re very pleased with the direction that the support of the crosswalk flag program has taken,” Collins said. “The creation of the AO itself, I know there’s a question as to whether it was needed or not. I think creating the structure and formality around it is a positive thing. Is it needed? I don’t know. But I do think that that’s a positive thing.”