Councillors expressed their disappointment with a mealy-mouthed social procurement policy presented on Tuesday, but it will be months before they can add any teeth to requirements for a living wage or diversity in the city’s contracting.

The policy — which passed on Tuesday as part of a rewritten procurement policy with only Coun. Matt Whitman voting no — is the result of a motion from Coun. Lindell Smith more than three years ago, asking for “a policy framework for the consideration of social economic benefit, employee compensation/living wage and environmental impacts in the procurement process.”

What staff brought back is an optional policy, where departments “shall consider” including criteria like supplier diversity or a living wage when contracting out services. 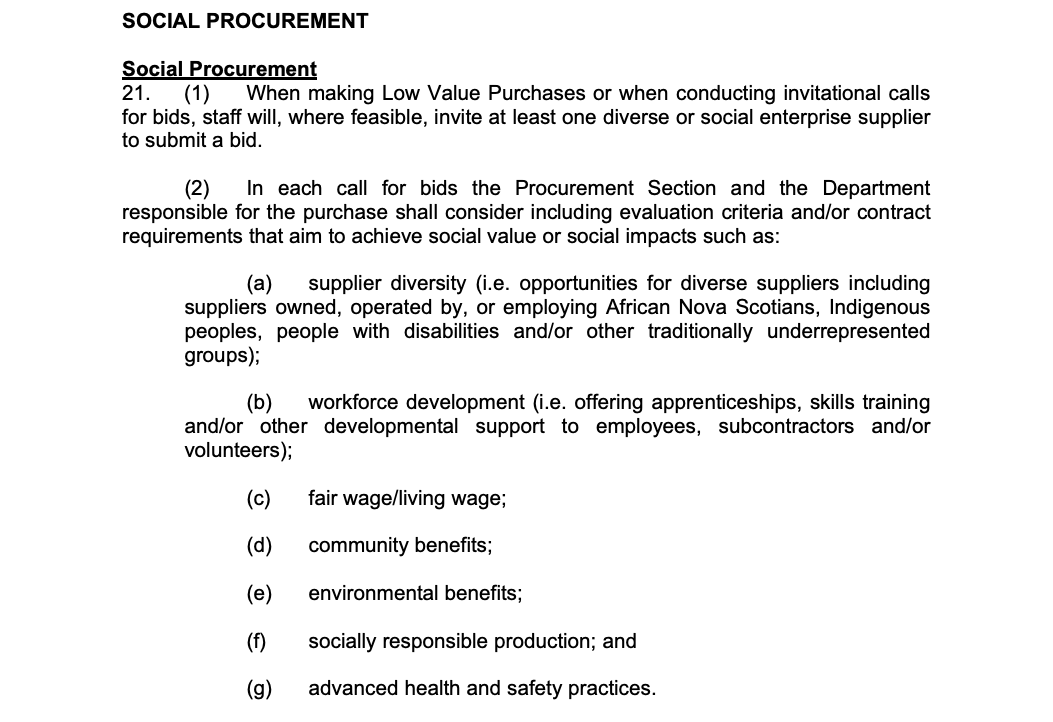 While Smith said he was happy with the policy’s goals, he expressed concern during Tuesday’s discussion that the policy won’t be effective because it’s optional.

Smith highlighted the story of one city contractor who was found in 2013 to be paying temporary foreign workers only $3 per hour to clean Halifax City Hall. That franchise owner was arrested and penalized, Smith noted, “but those families had to deal with that.”

“We can stop that from happening in the first place,” Smith said.

“Without looking at all contracts, all procurement, making sure that social value is labelled on everything, we’re not actually solving the issues where families are suffering because of people’s greed when they receive contracts. I really hope that we can look at the bigger picture and when we say social procurement and social value, it’s for all procurement opportunities, not just the lower value ones.”

When Smith asked if that wording could be changed to skip “consider,” he was told that would require another report.

Coun. Shawn Cleary successfully put forward an amendment looking for a supplementary report on criteria for including social procurement in contracting, and to define a living wage.

“My issue is around the, I guess kind of loosey-goosey nature of how this worded: that we may ‘consider’ it, that we might have the department heads actually go ahead and look at social procurement,” Cleary said.

Coun. Waye Mason agreed the wording made the policy ineffective.

“I don’t like it being optional. I think that kind of thing needs to be as much as possible something that is unconditional,” he said.

“The living wage piece, I feel like making that optional kind of defeats the purpose of having that at all. It illustrates why many of us have been really frustrated by how long this has taken.”

Mason said councillors know they award contracts to companies that hire temporary foreign workers because no one living here will work for so little money.

“Yeah, that saves the taxpayers money, but I think there’s huge moral and ethical issues there,” Mason said. “That’s the kind of thing that causes me to lose sleep at night, that we’re willing to do that knowing that nobody local will work for that little money.”

And after hearing councillors’ concerns with the policy, staff said they’re already working on a follow-up report.

“I just want to let council know that there is already a report that is planned to come to you in the fall of 2020 as an update,” procurement manager Jane Pryor said.

“That information report will come to you with not only information but also with recommendations on how to apply those social lenses first brought forward in 2017.”

Smith has spent most of his first term as a councillor fighting for the policy — having first made a motion looking for a living wage policy in February 2017. He’s faced repeated delays in his requests, and on Tuesday he was dealt one more.