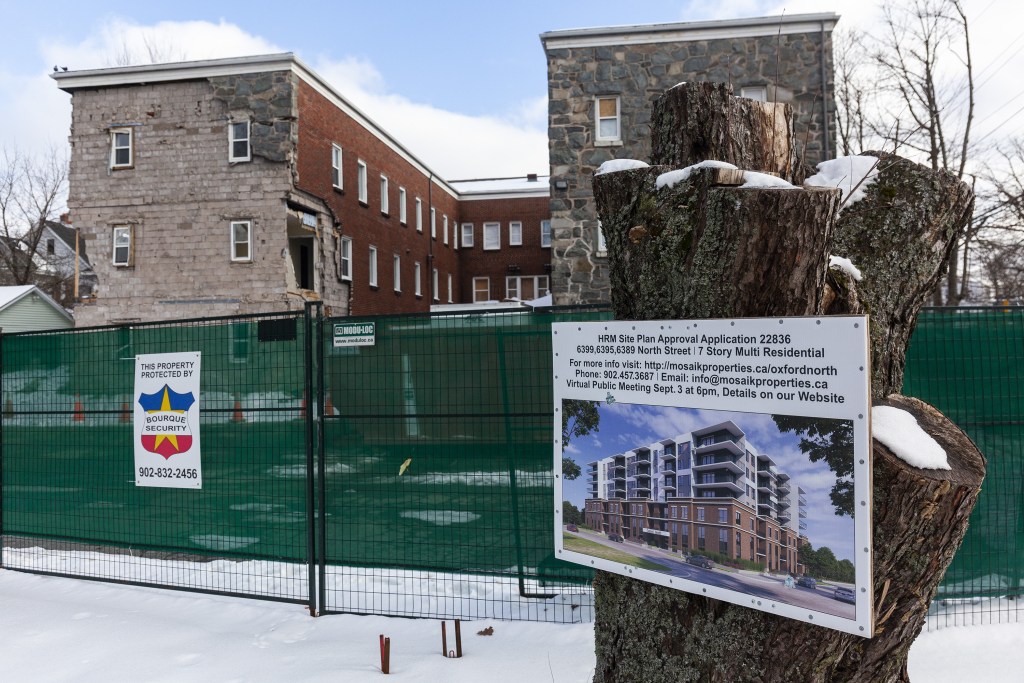 The partially-demolished building at the corner of North and Oxford streets, as seen from Seaforth Street on Wednesday, with a rendering of the new proposal attached to a tree stump. — Photo: Zane Woodford

Halifax’s regional centre councillors called the developer’s behaviour “deplorable” and questioned how he sleeps at night, but couldn’t find anything legally wrong with his proposal for North Street during an appeal hearing Wednesday night.

The city’s Regional Centre Community Council, made up of the councillors representing the Centre Plan area — Tony Mancini, Waye Mason, Lindell Smith, and Shawn Cleary — heard an appeal of the decision to approve Mosaik Properties’ plan for a seven-storey, 128-unit residential building at 6399, 6395 and 6389 North St. The properties front on North, Oxford and Seaforth streets.

It’s the location of the brick building known as Ardmore Hall, where, according to the municipality and reports in the Chronicle Herald and CBC, Mosaik Properties, owned by George Giannoulis, started demolishing a tenant’s apartment in December before he’d been legally evicted. Giannoulis denied, in a past email to the Examiner, that the tenant was still living there when demolition started.

The municipality has since pulled the demolition permit and the Herald and CBC reported that the provincial Department of Labour fined the developer $1,000. The developer is permitted to conduct remediation work, removing asbestos and other hazardous materials from the site.

“As I understand it, there is an ongoing process relating to someone who has tenancy in that building,” municipal planner Peter Nightingale told councillors.

“And presently the building official does not feel that the permit can be reinstated until some of these other issues are dealt with.” 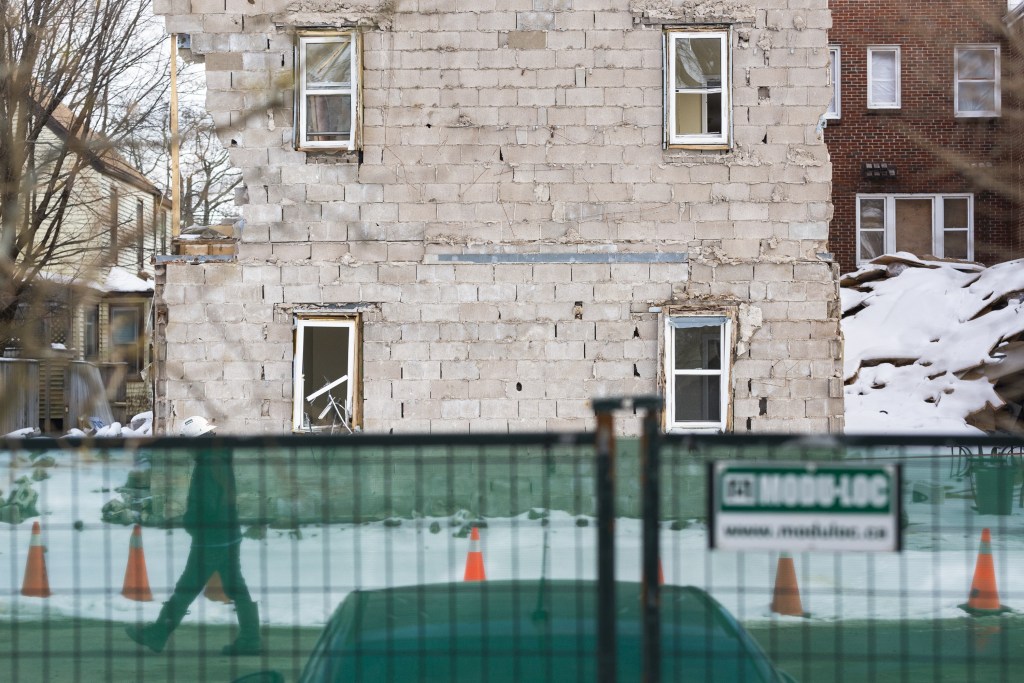 A worker walks past the partially-demolished building on the site, as seen from Seaforth Street on Wednesday. — Photo: Zane Woodford

But the plans for the new build were approved before all of that.

Municipal planner Sean Audas, the development officer for the project, approved the plan, submitted under the Centre Plan, following the Design Advisory Committee’s recommendation in September. Three people in the neighbourhood appealed that decision.

At the community council’s meeting on Wednesday, councillors heard from the three appellants — Joan Fraser, Pat White, and Stephanie Woodman — and a nearby resident, Jane Spurr.

Fraser argued the building was too tall, even with an 11-metre streetwall meant to transition from the mid-rise to the single-family homes surrounding it. Fraser asked the community council to defer its decision while the developer dealt with its legal issues around tenancy. 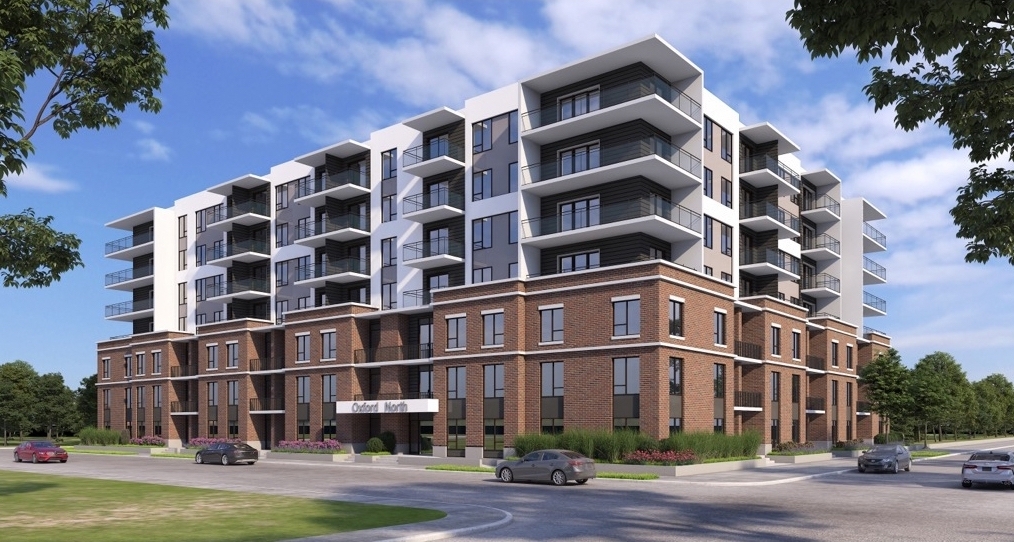 A rendering of Mosaik Properties’ proposal, looking at the corner of Oxford and North streets. Photo: Paul Skerry Architects

“This is an urgent matter that will forever have an impact on this low rise residential community,” Fraser said.

White argued the driveway for the developer shouldn’t exit onto Seaforth Street, the quietest of the three options.

“This development would make Seaforth Street heavier with car volumes and go against the street calming initiatives,” White said.

White also argued the mechanical penthouse on top of the building should count toward its overall height. He highlighted the issues with the developer’s handling of tenants, too.

“This building does not fit in this neighbourhood and the developer has not been a good neighbour,” he said. 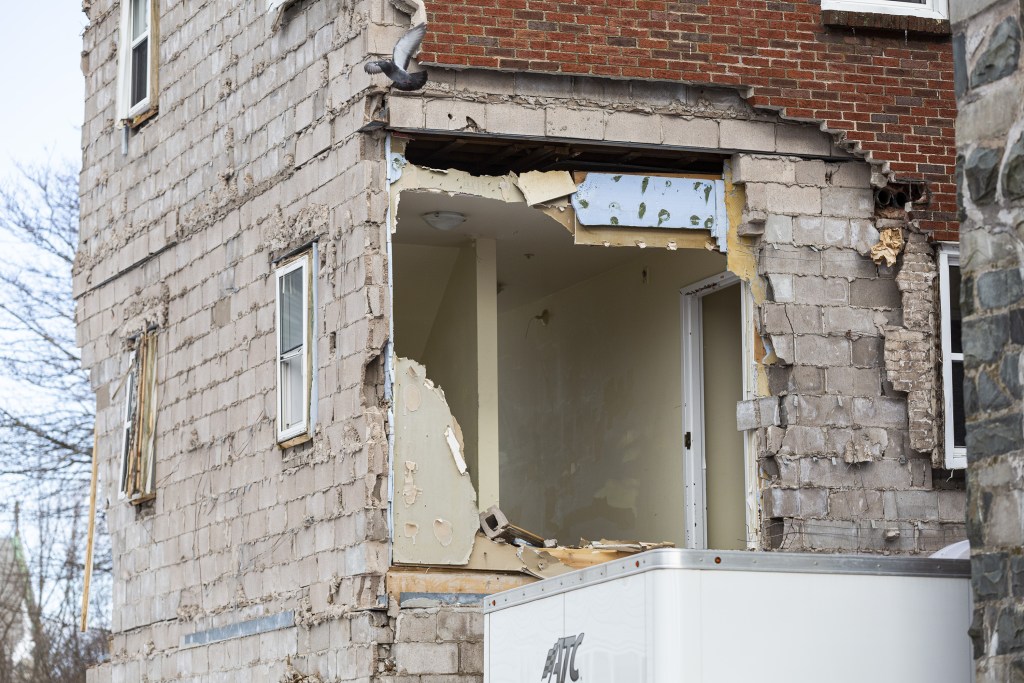 The portion of the building where the developer started demolition in December, as seen from Oxford Street on Wednesday. — Photo: Zane Woodford

Woodman said she endorsed Fraser and White’s comments, but added none of her own.

Spurr, who lives more than 100 metres from the site and was not automatically permitted to speak, shared White’s traffic concerns. Councillors voted to allow her to speak at the hearing.

“This building plan has been presented to you with a driveway dumping onto Seaforth Street, dumping traffic that will be more than one and a half to two times the existing cars that currently occupy the residences here on Seaforth Street,” Spurr said. “This is a significant issue.”

In the staff report to councillors, Nightingale and Audas dismissed those same concerns, writing that the plan “demonstrates no contravention of the requirements in the bylaw.”

On Wednesday, Nightingale told councillors their decision should only consider the design of the building — “things that really affect the outward appearance of the building.” The land-use bylaw does not cover issues of public safety, driveway locations, building code, or demolition.

“Those are things dealt with under other municipal bylaws and regulations,” Nightingale said.

By-law S-300 governs streets, for example, “and stipulates that a driveway shall be located on the street that carries the lesser amount of daily traffic,” according to the staff report. In this case, that’s Seaforth Street.

Keeping the limitations in mind, councillors sympathized with the neighbours’ concerns, but ultimately voted unanimously against the appeal.

Smith, the councillor for the site, said he couldn’t find grounds to uphold the appeal. “But as mentioned, there’s other aspects of this that still have to be addressed through other bylaws and whatnot and we still have the ongoing case, which it outside of this process, but is one that I know my colleagues are paying attention to,” he said.

“In my opinion that was deplorable, and the applicant should be ashamed for doing that,” Mason said.

“Demolishing a building while someone’s property is inside, man I don’t know how you sleep at night,” Mancini said.

Giannoulis did not speak during Wednesday’s hearing. Architect Greg Johnston spoke on his behalf, suggesting a speed hump on the driveway to slow traffic coming out of the building. He made no mention of the demolition issues.