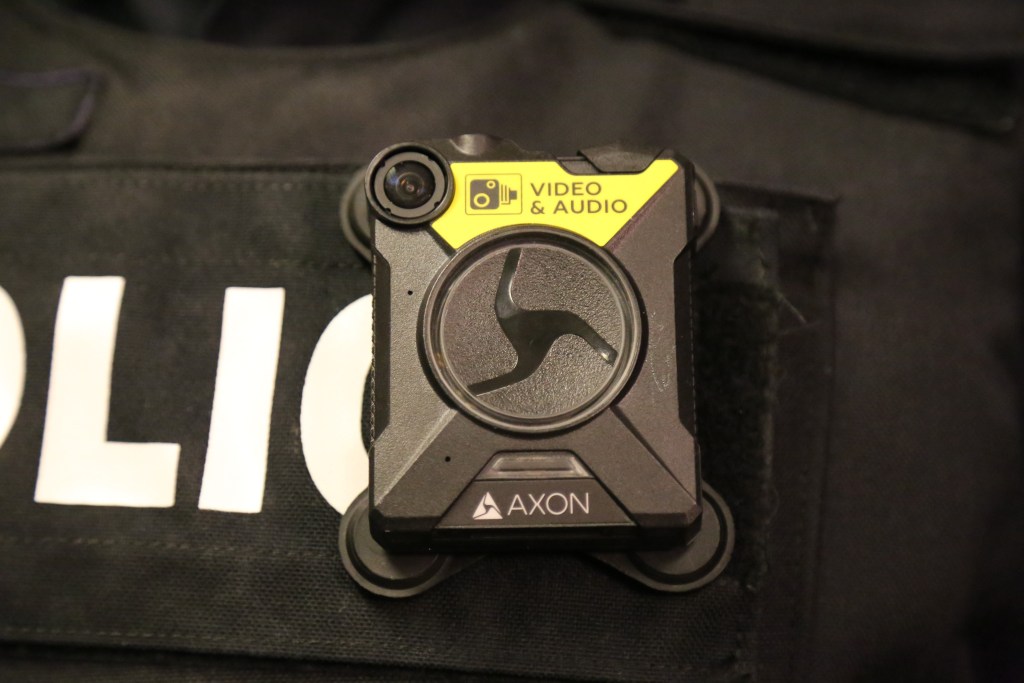 After hearing from a long list of speakers opposed to any increase in funding for the police, Halifax councillors turned around and added money to the Halifax Regional Police budget.

Regional council’s budget committee started the process of finalizing the municipality’s 2021-2022 operating budget on Wednesday, picking items from its budget adjustment list to fund in fiscal the year ahead.

Among those items was $85,000 for a one-year term employee with Halifax Regional Police (HRP) to look into the use of body-worn cameras.

The item comes after the city’s Board of Police Commissioners voted in January to hit pause on HRP’s plan to move ahead with body-worn cameras. As the Halifax Examiner reported in January:

At the board’s last meeting, police brought forward a plan to implement body-worn cameras this year. The initial costs would total $890,000 in fiscal 2021-2022, and over the first five years, they’d be $3.71 million.

Finding that first report lacked research to back up the cops’ claim that body-worn cameras would “provide benefits to the community” and “enhance police transparency, public trust and accountability while also improving operational effectiveness,” the board asked for more information, along with policies for the use of cameras.

HRP wrote that report, citing reports from other police forces and academic research and concluding that “It is unreasonable to expect [body-worn video] to be a silver-bullet solution to a wide range of issues, but the overall weight of evidence suggests that [body-worn video] can have some positive effects, especially around resolution of complaints against police officers.”

The report also notes that researchers have found the cameras “do not address underlying issues related to systemic racism, and serve to re-focus attention on only the specific situational factors of specific instances of police response.

The board wasn’t satisfied to move ahead, and it instead voted in favour of a motion from Coun. Lindell Smith, chair of the board, to direct the police to develop policies and a work plan around body-worn cameras, and conduct a privacy impact assessment. The motion passed during that meeting accepts HRP’s ask for body-worn cameras in principal, and plans for a fiscal 2022-2023 rollout.

To do the work requested by the board, HRP Chief Dan Kinsella brought a request for $85,000 to council’s budget committee — on top of the $88.6-million* budget the committee approved — to pay for a one-year term employee. The committee added that item to its budget adjustment list during a meeting in February, and it was up for consideration on Wednesday.

At the start of Wednesday’s meeting, 18 people used the public portion at the beginning of the virtual session to ask councillors not to add any money to the police budget. Many of the speakers said the police should be able to pay for the position using their existing budget, and argued that body-worn cameras have already been proven ineffective in multiple studies.

Later in the meeting, Coun. Tony Mancini acknowledged the speakers’ concerns, but moved to add the $85,000 to the police budget.

“What’s the intent of the body-worn camera? It is not to stop racism or change police behaviour or even change citizen behaviour or reform police. It’s about evidence,” Mancini said.

Coun. Shawn Cleary said the municipality needs the report. He said he would support the funding “in spite of the correspondence we’ve received and also the folks this morning who presented to the budget committee on this particular issue about defunding the police.”

“They are right in the sense that there is no literature that would suggest that wearing a body cam is going to influence the behaviour of the police officer or the public, but that’s not the only use of the body cam,” Cleary said.

Coun. Pam Lovelace argued that since the RCMP are outfitting officers with body-worn cameras across the country, including in Nova Scotia, HRP should look at whether their officers should have them too.

“I understand that maybe now is not the right time, but that being said, cameras will be here very shortly,” Lovelace said.

“I do think that it is important for us to have the data, to have the opportunity to make an informed decision as to whether or not body cameras on HRP are warranted and where or not we as a municipality want to move forward with that.”

Coun. Iona Stoddard was one of three votes against the motion, along with councillors Patty Cuttell and Waye Mason. She agreed with some of the speakers that police should be able to find the money in their $88.9-million budget.

“I have a hard time with this,” Stoddard said. “And I also believe that we need to change the behaviour, not the equipment. If you don’t change the mindset of officers and how they deal with Indigenous and people of colour, what they’re wearing — tasers, guns, body cameras — it’s not going to make a difference.”

For Tari Ajadi, a member of the Nova Scotia Policing Policy Working Group, listening to the debate was frustrating.

“How does this investment in the police look like defunding the police? It just doesn’t,” Ajadi said in an interview after the vote on Wednesday.

“There is a wealth of peer-reviewed research … At best, body-worn cameras are inconclusive. There’s no good evidence to suggest that they’re effective. Why are we setting up a pathway to throw millions down the drain when we could be investing that money into meaningful social services within our community?”

There are still two budget options on the table for HRP — $85,800 for a court dispositions clerk and $60,000 for an internal training course. Ajadi doesn’t have much hope that councillors will start saying no.

“Fundamentally, councillors have to decide whether they’re actually interested in holding the police to account or not,” Ajadi said. “Because what that means is putting them into an uncomfortable space, it means actually asking tough questions, it means saying no to Chief Kinsella every once and a while.”

Policing wasn’t the only topic on the public’s mind on Wednesday. Nine people spoke to council in opposition of a bus being rerouted into their neighbourhood.

As the Examiner reported when the budget committee approved the Halifax Transit budget, Route 55 is changing as part of the last stage of the city’s Moving Forward Together Plan:

Citing low ridership, Halifax Transit is proposing to stop the route 3 km short at Charles Keating Drive, rather than continuing down Waverley Road to the Highway 118 underpass, where it turned around in a gravel parking lot.

The new route will use Charles Keating Drive and a portion of Craigburn Drive to create a loop at the end, and that had Coun. Cathy Deagle-Gammon, who represents District 1–Waverley-Fall River-Musquodoboit Valley, asking questions.

Deagle-Gammon has heard from residents on Craigburn Drive who don’t want the bus running through their neighbourhood.

“The community would really like to see another option and consideration done.”

The community made its concerns heard on Wednesday. Primarily, the residents are worried about bus traffic — every hour or so — on their narrow residential street. They told councillors their kids won’t be able to play in the street anymore, or at the neighbourhood playground, and warned of “stranger danger” as the bus rolls past.

Deagle-Gammon moved to add $50,000 to the budget to keep the bus running to its usual turn-around spot at the Highway 118 overpass, while also extending it at the other end to go all the way to the Alderney ferry terminal (it currently stops at the Bridge Terminal).

The debate was ongoing when the committee recessed for the day, with a few speakers left. The committee will continue that debate, and work through the rest of the budget adjustment list, on Thursday morning.

Here’s what was added to the budget on Wednesday, totalling about $5.9 million, all to be funded through increased deed transfer tax: