You are here: Home / City Hall / Halifax councillor to move for restricted turns at intersections to protect pedestrians 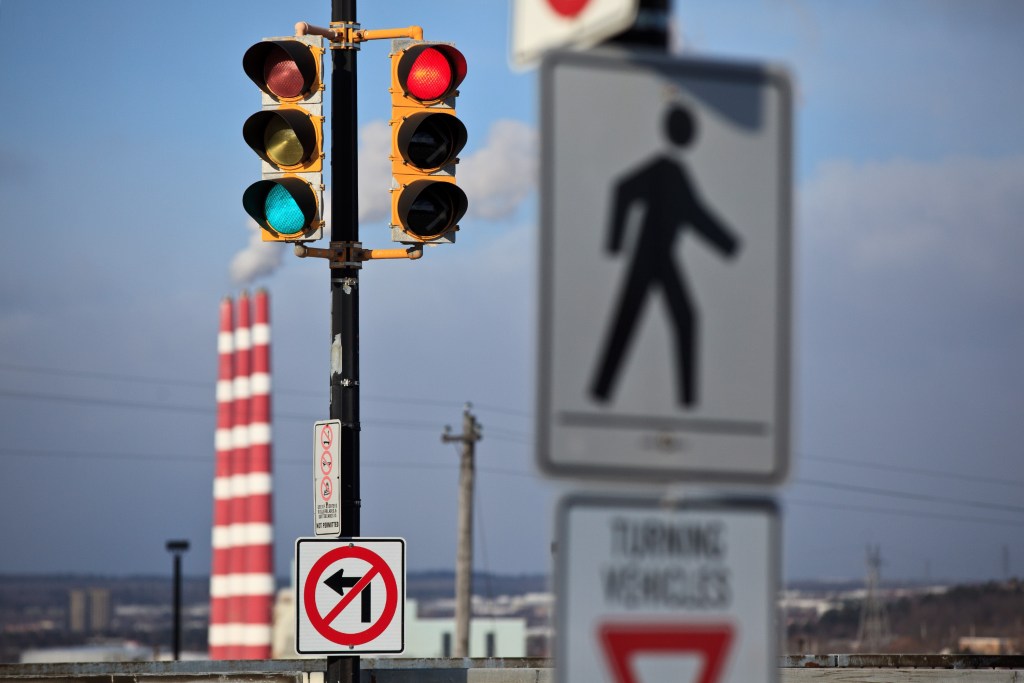 Traffic lights and signage at an intersection near the Macdonald Bridge in Halifax in 2018. — Photo: Zane Woodford

Following the death of a pedestrian in Halifax last week and an outcry from activists, a councillor plans to move for a staff report on restricting drivers from turning while people are crossing intersections.

A driver hit and killed 75-year-old Dr. David Gass at the intersection of Kempt Road and Young Street. The pick-up truck driver, who was ticketed for failing to yield to a pedestrian, was making a left turn from Kempt onto Young, and hit Gass, who was crossing Young.

The incident has galvanized activists fighting for safer streets, including Martyn Williams of Kjipuktuk (Halifax) Safe Communities for Everyone.

Williams had been working on a proposal for the municipality since a driver making a right-hand turn hit and killed a pedestrian in Dartmouth, Kathy Warren.

“And then the horrific incident happened last week, and I wasn’t really finished, but I just kind of shoved my proposal to councillors and said, ‘This really needs to be looked at urgently,'” Williams said in an interview Friday.

The proposal makes the case for better protecting pedestrians at intersections — restricting turning when people are crossing.

“It’s a system that I’ve encountered a lot in the U.K.,” Williams said.

Williams shares the photo below to illustrate the idea, and he believes Nova Scotia’s traffic rules would allow it. 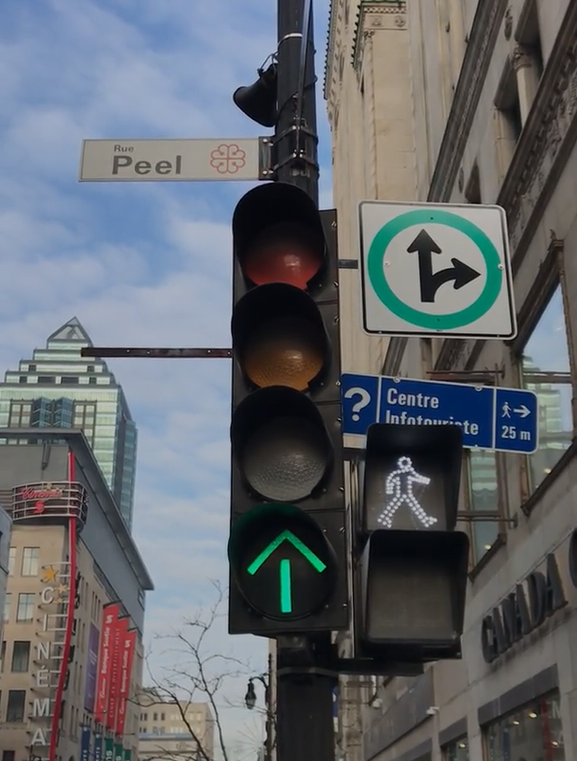 A still from a video by Sean Marshall of a Montreal intersection with an arrow pointing straight.

In that intersection, left turns aren’t permitted, and right turns are restricted until pedestrian crossing is finished. When the green arrow is lit, pedestrians can cross without having to worry about a distracted driver turning into them. Montreal doesn’t allow right turning on red, either.

These are called “protected turn movements,” and Coun. Waye Mason gave notice of motion at Thursday’s meeting of the Transportation Standing Committee that he’ll move for a staff report, to be complete before the next budget, “that outlines options for a program for establishing protected left-turn movements and protected right-turn movements at signal controlled intersections. The program should prioritize high traffic and pedestrian volume intersections and high conflict intersections.”

The reasoning section of Mason’s full motion reads as follows:

At many intersections HRM relies on permissive turn signals, which can put pedestrians at risk even if the pedestrians are obeying the signals.

A permissive turn signal indicates to the driver viewing it that if they are in the appropriate lane they can proceed knowing that traffic going the opposite direction is permitted to proceed and people walking are seeing a ‘Walk’ or ‘flashing hand’ signal and may be crossing the street. The driver needs to look for gaps in the vehicle, cycling or pedestrian traffic to complete the turn. Frequently drivers proceed when it is not safe to do so and put pedestrians at risk.

By changing to a protected turn signal, drivers may only proceed when faced with a green arrow signal indication showing a left or right turn is permitted.

The driver then knows traffic going the opposite direction and people walking are is not permitted to proceed.  Similarly, pedestrians with a walk signal do not face conflict with drivers crossing their path.

Protected turn movements should be combined with Right Turn on Red (RTOR) prohibitions enabled because of conflicts with the proposed exclusive pedestrian phase and/or recognizing a history of right turn on red collisions on a particular approach.

This measure could significantly reduce conflicts between vehicles and pedestrians, further reducing death and injury at intersections, while modestly slowing traffic movements.

He’s looking for a report “identifying costs and opportunities related to implementing protected turn movements combined with RTOR prohibitions to reduce conflicts between pedestrians and vehicles, prioritising busiest intersections and those with demonstrated pedestrian/vehicle conflicts.”

In an interview, Mason said the “tsunami of anger” on social media over Gass’ death is “entirely justified.”

Mason said he’s looking for changes at intersections like Kempt and Young, where Gass died. That intersection is wide enough that it has left-hand turning lanes where drivers could wait.

Right turns on red lights should be prohibited too, Mason said, maybe not everywhere but at least in intersections with a history of collisions.

The Transportation Standing Committee received a report in the fall recommending against banning right turns on red, arguing the move would shift the conflict between vehicles and pedestrians to the period when they both have a green light. The report, by traffic engineer Jill Morrison, also warned of “undue delay” that could lead to “driver frustration and non-compliance.”

“I kind of went with that, and now I think we need to revisit it,” Mason said.

“I think we need to have protected turns so that pedestrians are not conflicting with people turning left, and possibly right where possible, across intersections … And I think it will slow down cars, and that’s fine.”

Williams was happy to see the notice of motion, with an exception.

“It is exactly what I’m asking for but there’s a big but, and that’s the time scale in that this is for a staff report to be completed prior to the start of the 2022-23 budget season,” Williams said.

In that time, numerous people will be hit by drivers turn in intersections.

Councillors shouldn’t have to be identifying these solutions themselves, Williams said; transportation officials know where and how these collisions happen, and they should be creating an action plan as part of the city’s Road Safety Framework.

“These are very entrenched systems that have been in place for a very long time,” Williams said.

“This is something where the ball has been dropped in a very big way.”

Mason will make the motion for a staff report at the next Transportation Standing Committee, schedule for April 22.