Almost two weeks after the city’s police-enforced eviction of people living in tents and shelters in city parks, Halifax regional councillors are admitting some fault and promising dozens of affordable housing units.

It wasn’t on the table beforehand, but housing dominated the first half of council’s all-day meeting on Tuesday, with three items added to the agenda.

First, Mayor Mike Savage opened the meeting with a statement on the events of Aug. 18, when Halifax Regional Police enforced evictions in multiple city parks, culminating in police using pepper spray on a crowd of protesters outside the former Halifax Memorial Library.

“This council believed that people staying in the park should be treated with dignity and empathy and that everybody would be offered a safe, clean accommodation that would bridge them to supportive housing. While some have been housed, clearly this was not the case in all cases,” Savage said during Tuesday’s meeting. 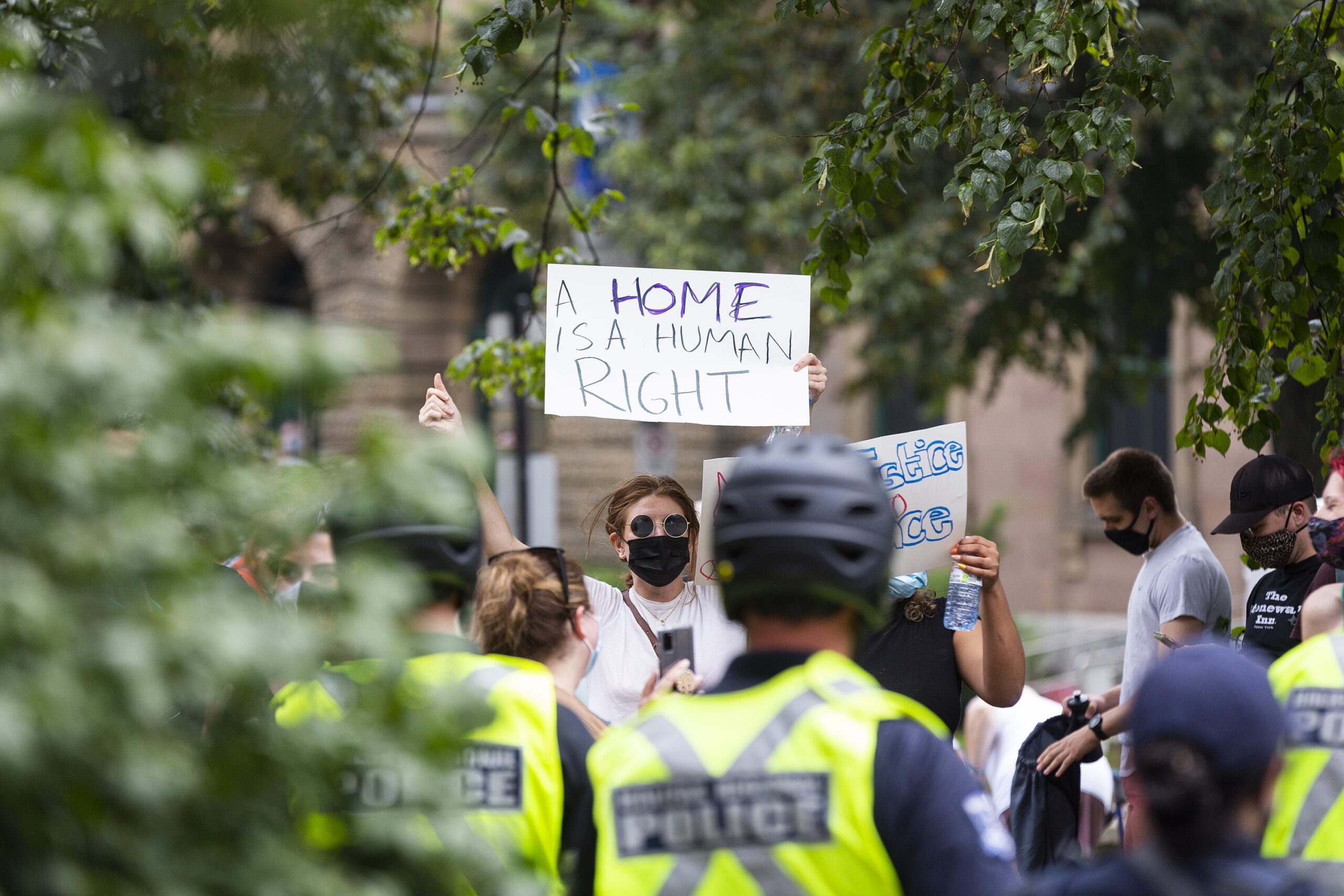 A protester holds a sign reading, “A home is a human right” at the Halifax Memorial Library site on Aug. 18. — Photo: Zane Woodford

It’s a departure from his messaging on Aug. 19, when Savage continued to claim, in the face of numerous reports to the contrary, that everyone evicted had been offered housing.

It was one of a series of false claims Savage made in an interview with Portia Clark on CBC’s Information Morning, which Tim Bousquet debunked in the Morning File the next day.

While he never outright apologized on Tuesday, Savage at times struck a remorseful tone. He continued:

In my view, ultimately we allowed what began as a mission to get people into better circumstances to devolve into an operation to remove them from parks, for reasons of health and safety. Many good people on our staff and around this chamber know we can do better. It’s too easy to pile on police who are first tasked with enforcing a bylaw, and then outnumbered in a park. Those officers called for backup, it came in volume. We saw how it played out. It’s not something that we wanted, or want to see again. What do we take from this? In the face of lost faith and criticism in our intentions, we must recognize it is time to recommit to the mission, to be a real partner, getting people housed.

After his statement, Savage brought forward a motion to get council more involved in the delivery of housing, that council:

Direct that the CAO be authorized to spend up to $500,000 from Fiscal Services in respect of addressing these needs, and report on the use of said funds quarterly at a minimum; and,

Further direct the CAO to work with Department of Community Services and community service providers on a needs-analysis including determining how many people are unhoused, how many of them are currently tenting or occupying other forms of shelter within parks and other public lands in Halifax Regional Municipality and how many can be accommodated in a safer manner.

“This is about immediate crisis housing, and it authorizes us to take action,” Savage said.

“We have to make sure that everybody has a decent place to spend the night. I don’t want to be the mayor of a city where people don’t have the ability to spend the night in at least somewhat comfortable conditions and give themselves a chance to achieve their potential.”

In response to Savage’s motion, chief administrative Jacques Dubé, who by all accounts called the shots on the violent evictions of Aug. 18, said he recently directed staff to compile a list of city- and privately-owned buildings that HRM could use to house people this winter. There are three sites identified, and Dubé said the municipality will be able to house 40 people in those spaces if they come to fruition, with supports.

He said there are 81 people are currently sleeping rough, in tents, emergency shelters or otherwise. In a Twitter thread late Tuesday night, street outreach worker Eric Jonsson detailed how he and other workers came to that number and what it means.

Those 81 people are presumably part of the 417 people currently unhoused in HRM as of Aug. 24, per the Affordable Housing Association of Nova Scotia’s statistics.

Along with retrofitting those buildings for housing, Dubé said the $500,000, an ongoing annual expenditure, will be used to hire people to work for non-profits delivering supportive services, along with hotel stays.

During debate on the motion, multiple councillors lamented the public perception that they don’t care about these issues.

“This council and the previous council has done more than any other for housing,” Coun. Tony Mancini said. 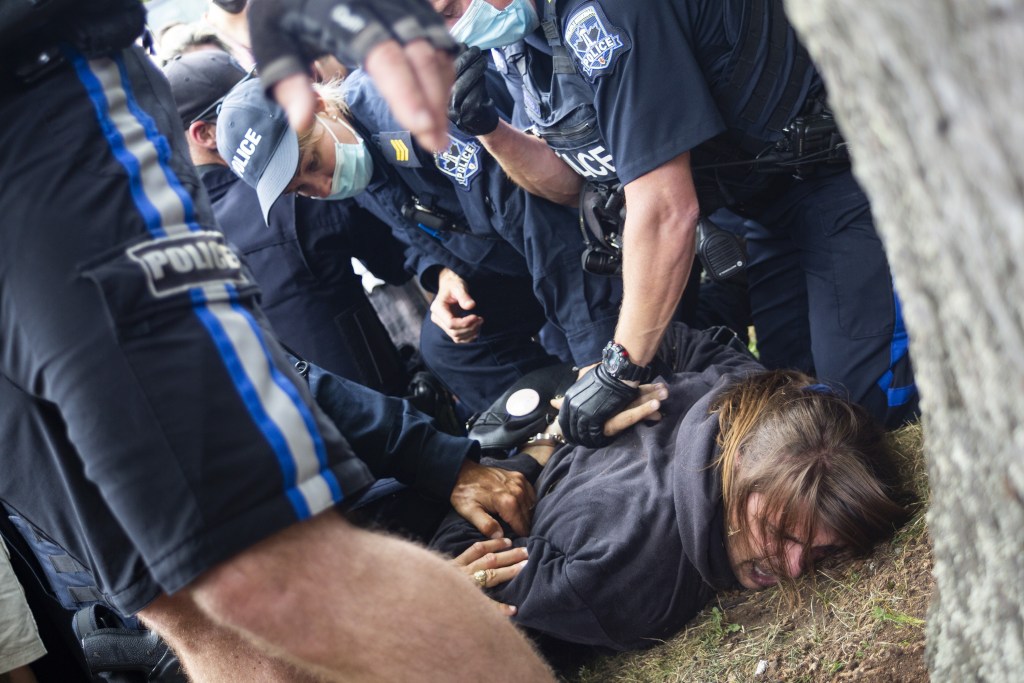 “I am concerned about the level of public discourse, the hate in my particular that I have experienced and some of my other colleagues, calling for my head, calling for my resignation, threatening to take myself and my children out of our beds at night,” Lovelace said.

“It really is shocking and surprising the lack of understanding of the municipal role in housing, so I would ask staff to beef up our efforts to communicate transparently, effectively about what our role is in homelessness and housing.”

Coun. Becky Kent was the first to apologize for the events of Aug. 18.

“I want to acknowledge that they were very traumatic, very disturbing, and frankly, I want to say how sorry I am that those unintended consequences of what we thought was a good plan unfolded,” Kent said.

“Nothing about that violent, disturbing sequence of events was OK. For those of you who experienced that, I never want to see something like that happen in this city.”

But Kent also complained about the narrative that councillors don’t care, or that they’re inhuman. She said people emailing councillors should share their ideas, not just their complaints.

Coun. Lindell Smith moved an amendment to Savage’s motion to have Dubé file a monthly public reports to council on the progress in implementing the motion.

Smith also asked whether council could move to allow tents or shelters in some parks. Dubé told him that would require a staff report.

Next, council voted to submit a proposal to the federal government to use nearly $13 million in funding from the Rapid Housing Initiative to create 85 units of affordable housing.

These units are meant to be deeply affordable, with rent geared to income, meaning tenants pay 30% of whatever they receive monthly.

This is the second round of Rapid Housing Initiative funding from the Canada Mortgage and Housing Corporation after council voted late last year to direct more than $8 million to Adsum, the Mi’kmaw Native Friendship Centre, and the North End Community Health Centre to build 52 units within a year. 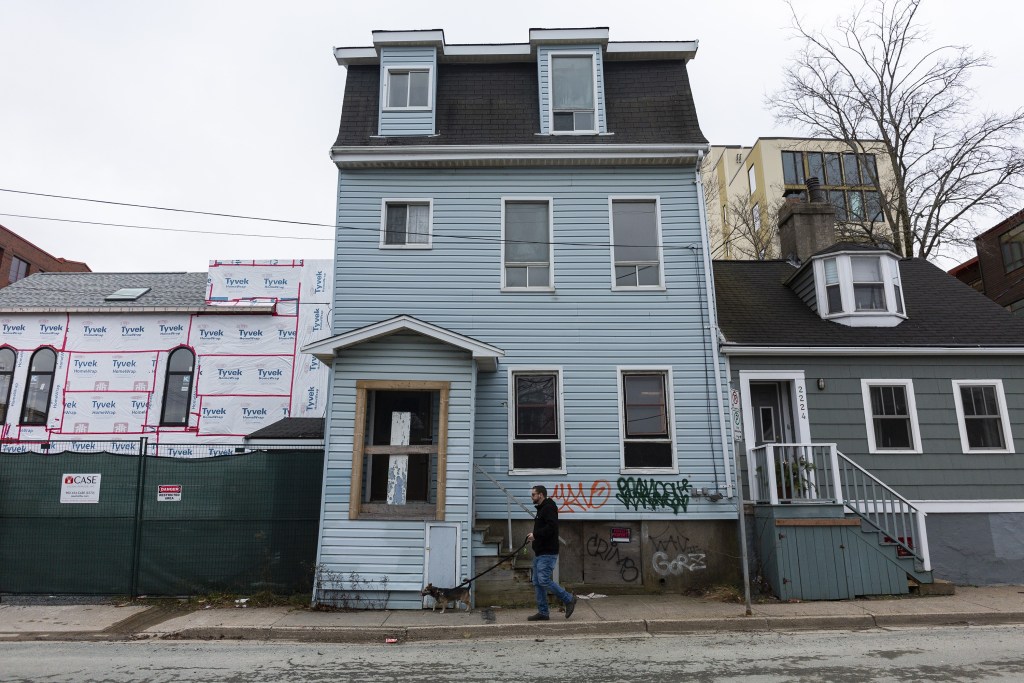 The municipality was required to submit its proposal for the money on Tuesday, and municipal planner Jill MacLellan recommended in favour of three projects.

The first is from the Affordable Housing Association of Nova Scotia (AHANS), which wants to convert an existing non-residential building in North Dartmouth to a 65-room supportive housing model at a cost of $6,282,640.

Rooms in that building would be “targeted to individuals who are homeless and live with two or more mental health, addiction and chronic health issues.” The North End Community Health Association would help with the supports, and at least a quarter of the rooms would be reserved for women.

AHANS doesn’t yet own the building, and in an interview on Tuesday, executive director Jim Graham said he’s not in a position to say exactly where it is.

Graham said if the proposal is approved by CMHC, the units could be occupied by the winter.

Along with this federal funding, AHANS has a commitment for $3.5 million from the provincial government for capital costs and more for operating, plus $2.4 million from another federal program called Reaching Home.

“It’s something that I would say we haven’t seen enough of, which is, instead of folks getting in each other’s way, actually sitting down and figure out how they can pull all this together, so that’s also a quite exciting prospect.”

The second recommended project is from Souls Harbour Rescue Mission, which proposed an addition to its women’s shelter on the Eastern Shore.

For $2,995,185, that proposal would add 12 units to the property in a three-storey building “that will be focused on housing for women and women with children.”

And third is Akoma Holdings project in Westphal, where the organization is redeveloping the property surrounding the former Nova Scotia Home for Colored Children.

For $2,748,129.30, Akoma is “proposing the development of 8 modular residential units, which would be part of a larger master planned community for the lands of the former Home for Coloured Children.”

With those three projects funded, the municipality would be left with $953,066.70 in contingency funding.

That’s likely a good idea, as MacLellan also reported to council on Tuesday that all three projects approved last year are over budget due to rising costs during the pandemic, and they’re all likely to be completed after the one-year deadline imposed by the federal government.

MacLellan said CMHC is aware of the budget and timeline issues.

Council voted unanimously in favour of submitting the proposal for new funding to CMHC.

The third housing-related motion at council on Tuesday came from Lovelace, who proposed a new advisory committee, the Lived Experience Advisory Committee on Homelessness for HRM (L.E.A.C.H., as one Twitter user noted).

“This report and recommendations must be based on the principle that systemic problems need systemic solutions inclusive of those most impacted by homelessness.”

That motion passed along with a friendly amendment from Coun. Patty Cuttell asking Dubé to provide training for councillors and staff on the impacts of mental illness, addictions and trauma.

Before launching its war on people living in tents and emergency shelters, the municipality paid an Ontario consultant $7,000 to provide training on “empathy-based approaches to homeless encampments” for some city staff.