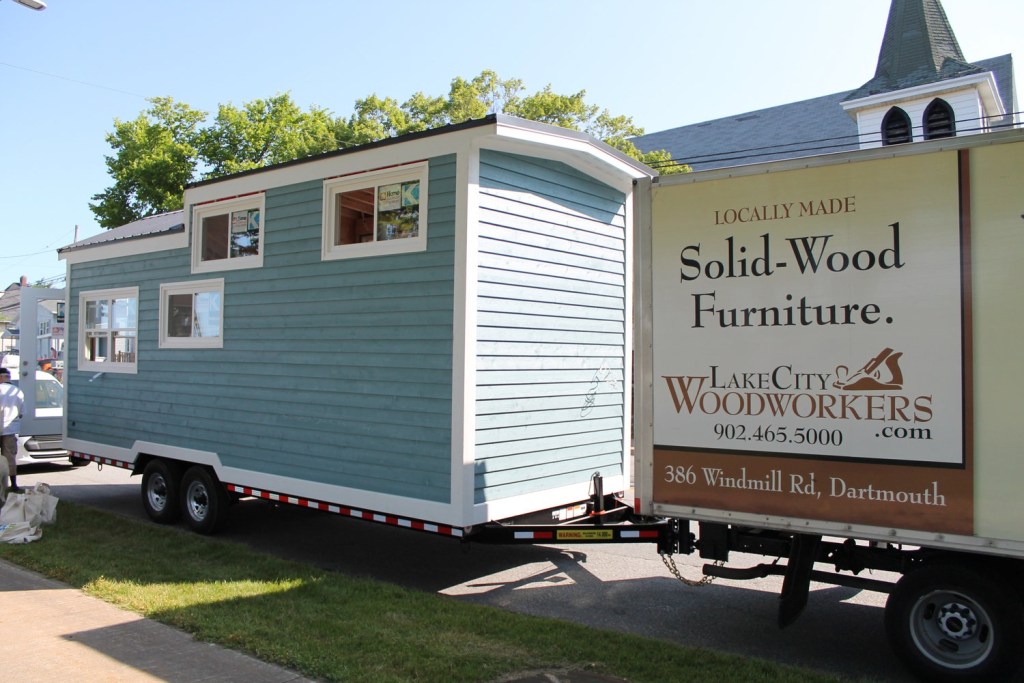 One of LakeCity Works’ tiny homes, as seen on its website.

Halifax won’t be making another request for federal housing funding this year, despite a last-minute attempt by Coun. Tony Mancini.

At council’s meeting Tuesday, the last of 2020, Mancini brought forward an added motion hoping to have the municipality apply to the Canada Mortgage and Housing Corporation for $4.4 million to support LakeCity Works’ proposal for 23 affordable tiny homes.

“I know this is not the normal procedure … but we are in a crisis and we need to address it and we need to be creative and I think it’s worth the risk,” Mancini told his colleagues. “And by us being the lead on it, it’s no guarantee, but it’s more likely that the LakeCity project would be accepted financially.”

The application would go to the projects stream of CMHC’s Rapid Housing Initiative. That’s the federal government’s $1 billion fund, announced in October, aimed at quickly creating 3,000 renovated, repurposed or modular affordable housing units across Canada. Halifax already submitted an investment plan for more than $8 million on behalf of three local nonprofits — the Mi’kmaw Native Friendship Centre, Adsum Women and Children, and the North End Community Health Centre — who will use the money to create 52 units that must remain affordable for 20 years.

With a deadline of Nov. 27 for applications, that money came from the major cities stream of the Rapid Housing Initiative funding — half of the money, which went directly to municipalities to use themselves or dole out to nonprofits. With a later, but still tight deadline of Dec. 31, the project stream will see governments, nonprofits and Indigenous governments compete for the remaining $500 million.

LakeCity Works, a Dartmouth non-profit that works with people with mental illness, was one of 12 nonprofits that applied to the municipality for the major cities funding, but it didn’t make the cut.

In the report to council last month recommending in favour of the three nonprofits that did make the cut, staff wrote that LakeCity “has a strong proposal and staff hope to support their submission for project stream funding.” Their plan is to build 23 tiny homes to be used as backyard suites on private property around HRM.

“Tiny houses would be intended for people dealing with mental health and addiction issues however, all members of target populations would be eligible for support,” the staff report last month said.

The nonprofit has developed plans and zoning allows for the tiny homes, but the staff report noted LakeCity doesn’t own any land for the project.

“Lake City Works has informal agreements with several property owners and has potential funding from other levels of government,” staff wrote.

“While Lake City Works may have less experience specifically in mass construction of modular housing, they have established plans and the expertise needed to complete the work.”

LakeCity runs an annual lottery for a tiny home, using the proceeds from ticket sales to fund its other programming.

Mancini proposed Tuesday to have Halifax apply on LakeCity’s behalf to give the Dartmouth nonprofit a leg up. HRM would be the project lead, Mancini explained, meaning it would receive the funding from CMHC and pay it out to LakeCity.

“This will increase the chances of funding for this project if the government, being us, is taking the lead on this project,” he told his colleagues. “I don’t need to tell anyone in chambers about the crisis we’re in when it comes to housing, and particularly affordable housing.”

Chief administrative officer Jacques Dubé told council Mancini’s motion only came to his attention Tuesday morning. He said the municipality was planning to support several projects in the running for the CMHC funding through offering 100% property tax relief or other measures, but not through acting as the project lead. That would mean taking on more risk to give LakeCity a better shot at the funding.

“We do have the understanding from CMHC that there will be less due diligence required for governments applying under the project stream than for NGOs, or non-governmental organizations, like LakeCity,” Dubé said, “because other levels of government are able to offset the risks associated with taking on the projects directly — in particular, making sure the projects remain affordable for the [20-year] period.”

The provincial government has agreed to assume the operational risk associated with the three projects approved under Halifax’s share of the the major cities funding, Dubé said, and he’d be more comfortable with Mancini’s proposal if the municipality had an agreement on this project. And getting that agreement by the end of the year is unlikely, he said.

“We also haven’t had the opportunity to asses the LakeCity business case and assess the risks,” Dubé said. “As CAO, I don’t have enough information to make a recommendation, negative or positive.”

Mancini said he knows there should be a staff report and he didn’t follow the usual process:

I understand that, but we are in a crisis right now … And we’ve shown some really good work in the last few months when it comes to affordable housing. We’ve led the way in many ways and it’s still not our mandate or our responsibility. I believe we have to be bold and I think, at times, take risk. And I think this is a time to take a risk … I believe it’s worth the risk to move forward.

Mancini’s colleagues had their own concerns.

Coun. David Hendsbee said LakeCity should “get in line.”

“I know Akoma Holdings are doing the same thing on the property of the old Nova Scotia Home for Colored Children, they’ve got a proposal going in. I just talked to another applicant who’s putting in a proposal for the North Preston community,” Hendsbee said.

“This housing initiative, it’s being targeted to Black Canadian communities that have been under-serviced for so long, so here’s an opportunity, the two projects I just mentioned, and they’ve got to take a backseat to other applicants?”

Other projects gunning for the project stream funding include the Affordable Housing Association of Nova Scotia’s plans for north Dartmouth and another proposal for affordable tiny homes.

Hendsbee said LakeCity was trying to “jump the queue.”

“I wouldn’t put it that anybody’s jumping the queue,” said Coun. Waye Mason, “it’s that we haven’t had the opportunity for staff to do the work so that we really understand what we’re getting into.”

Mason commended LakeCity for convincing Mancini to bring it forward, and said he appreciated what Mancini was trying to do.

“I can’t in good conscience vote to have an open-ended financial risk, especially in this case where we would be on the hook for any overages or non-compliance, unlike the ones the province guaranteed,” he said.

Coun. Cathy Deagle-Gammon was one of only two other councillors to support Mancini, along with Deputy Mayor Tim Outhit.

“Without a full business case and seeing the analysis, I understand the caution that fellow colleagues here are speaking about,” Deagle-Gammon said.

Kate Greene, regional policy program manager in the city’s planning department, said Halifax is working with the nonprofits that weren’t successful in the major cities stream to try to make them happen, and they’ll continue meetings in the New Year. Greene said her department would contact LakeCity to add a letter to its submission to CMHC.