You are here: Home / City Hall / Halifax council candidates blithely broke the new campaign contribution rules, and the municipality didn’t do anything about it 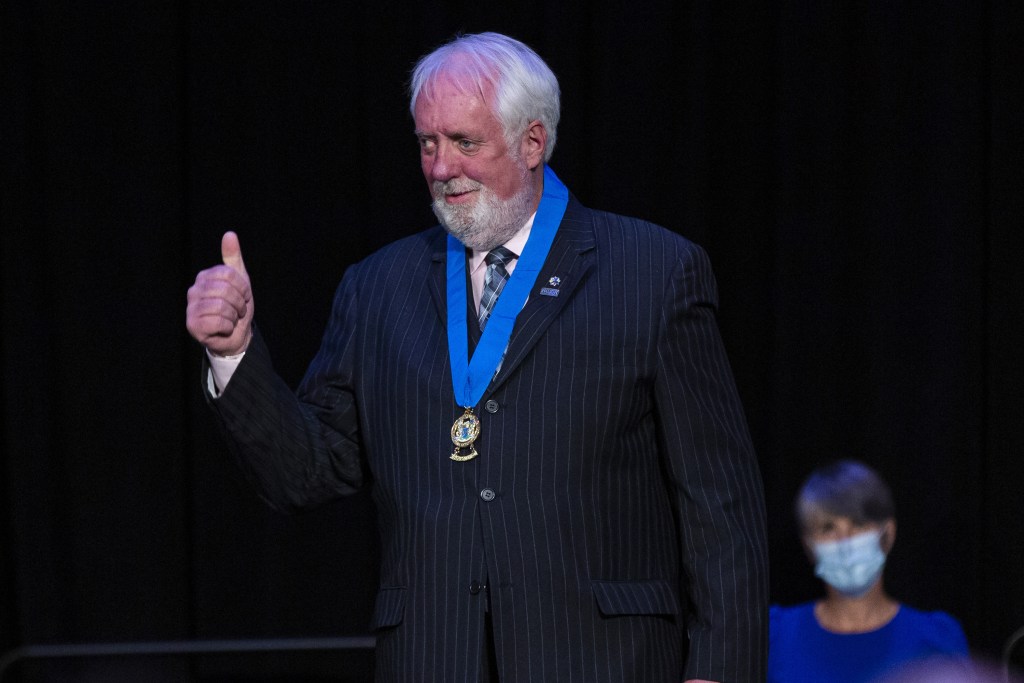 One long-serving Halifax regional councillor broke the rules in last fall’s municipal election along with another candidate in his district, and several other candidates didn’t even file their papers, according to campaign finance documents published this week.

Despite several contraventions, punishable by fines of at least $500, it doesn’t appear the elections office has taken any action against any candidate.

October 2020 was Halifax’s first general election under its new campaign finance bylaw, governing how much money candidates can raise and from whom. All candidates were required to file their campaign contribution statements by the end of the day on Dec. 16. The municipality published those statements online on Wednesday afternoon.

Failing to file the statements on time is an offence under the bylaw. The Examiner has emailed each of these candidates, and will update this story with their responses.

Arnold told the Examiner in an email that he’s planning to file his papers next week.

“I’ve been dealing with some health issues since early October and have been out of commission,” Arnold wrote. “I have spoken to April from the elections office and explained the situation.”

Desveaux, the District 3 candidate, replied, “i just submitted it, thanks for reminding me!”

Update, Jan. 14, 2021: Bignell, the District 12 candidate, replied suggesting he filed his statements: “I am not sure why they are not posted? I will be contacting HRM shortly.”

We filed late but the municipality now has them. The municipality did send out a reminder which I found when I found your email, panicked and then found their reminder in my junk file.  I can tell you that my expenditures totaled $1391.62. There was one donation of $250.00 and $570.81 each, from me, and from Ryan Rutledge.

Coun. David Hendsbee, first elected in 1993 and re-elected in October, filed his statements on time. But they show that the veteran councillor for District 2 – Preston-Chezzetcook-Eastern Shore, who voted in favour of the campaign finance bylaw, contravened it.

Hendsbee raised a total of $10,698.51 for his 2020 re-election campaign, mostly from himself. Included in that figure is $500 from Orenda Holdings Ltd. 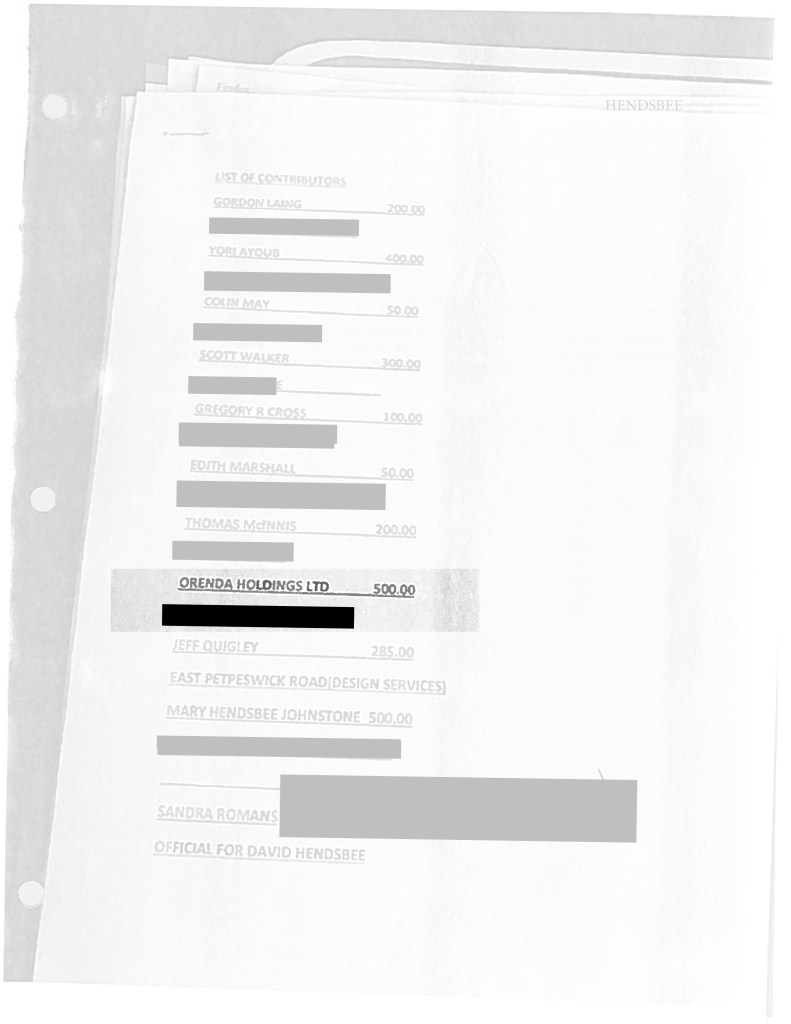 The Lake Echo company is owned by Nabil (Bill) Toulany, who also owns Billy Stick Foods Ltd. — notable for prevailing in a donair dispute in small claims court in 2017.

The issue with the donation has nothing to do with donairs, however; the problem is that it comes from a corporation.

With a goal of eliminating the inherent conflict of interest associated with donations from developers, the campaign finance bylaw developed in 2018 and passed in 2019 outlaws campaign contributions from corporations, unions, partnerships and non-profits.

Hendsbee said the campaign contribution process is arm’s length from him, handled by his agent, Sandra Romans, but he thought the donation came from Toulany, not the corporation.

“These new rules, apparently everybody’s not aware of them and people like to donate, so I guess they have to learn in regards to how it can be done,” Hendsbee said in an interview Thursday.

Toulany said his daughter handles his paperwork, and he probably signed the cheque without noticing which of his accounts it came from.

“The cheque was made, I guess, from the wrong account,” Toulany said in an interview. “It was an honest mistake.”

Both the company’s donation and Hendsbee’s agent’s receipt of the donation are offences under the bylaw:

5. No person shall make a Contribution to an Agent except an Individual, a Candidate, or a Candidate’s Spouse.

6. A person, including a Corporation, Trade Union, Partnership or Non-Profit Organization who makes a Contribution in contravention of section 5 is guilty of an offence.

7. An Agent who accepts a Contribution from a person other than an Individual, a Candidate or a Candidate’s Spouse is guilty of an offence.

The bylaw lays out the consequences for offences:

Every person who contravenes any of the provisions of this By-law is guilty of an offence and is liable, upon summary conviction, to a penalty of not less than five hundred dollars ($500) and not more than ten thousand dollars ($10,000) and in default of payment, to imprisonment for a term of not more than six (6) months.

Neither Hendsbee nor Toulany heard anything from the municipality’s elections office about the contribution. 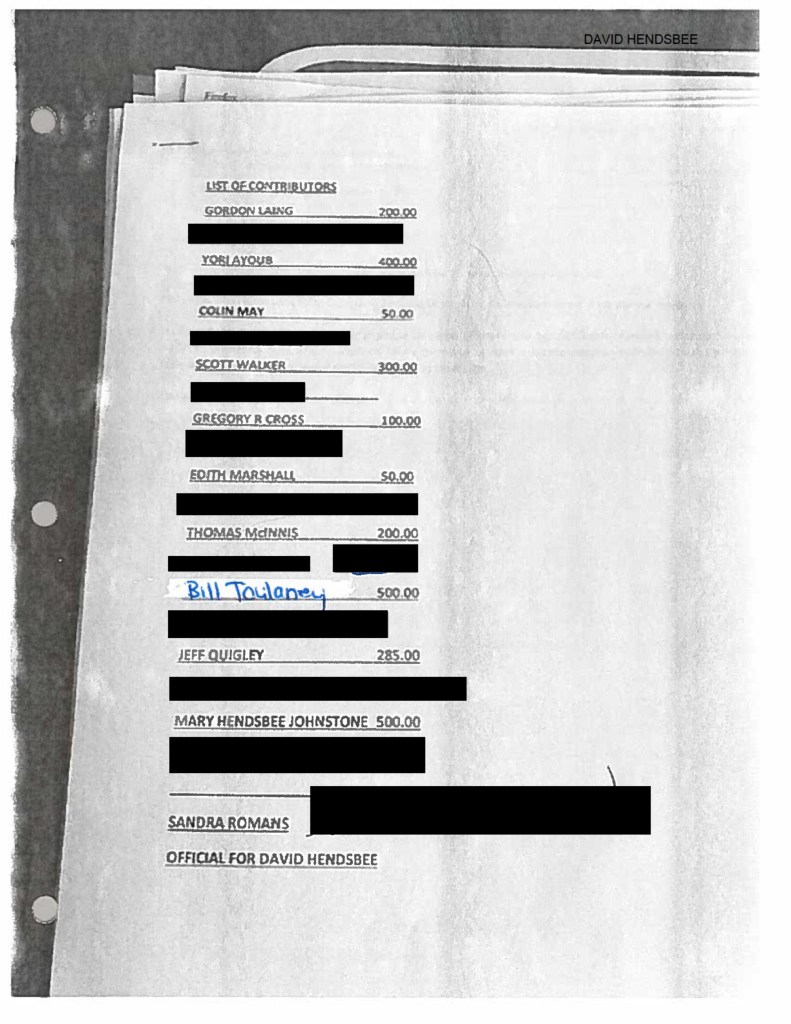 A page from the edited version of Hendsbee’s contribution statements. — Screenshot/HRM

Streatch, who lost the seat for Waverley-Fall River-Musquodoboit Valley to Coun. Cathy Deagle-Gammon in October’s election, received $100 from “Urquhart MacDonald.” 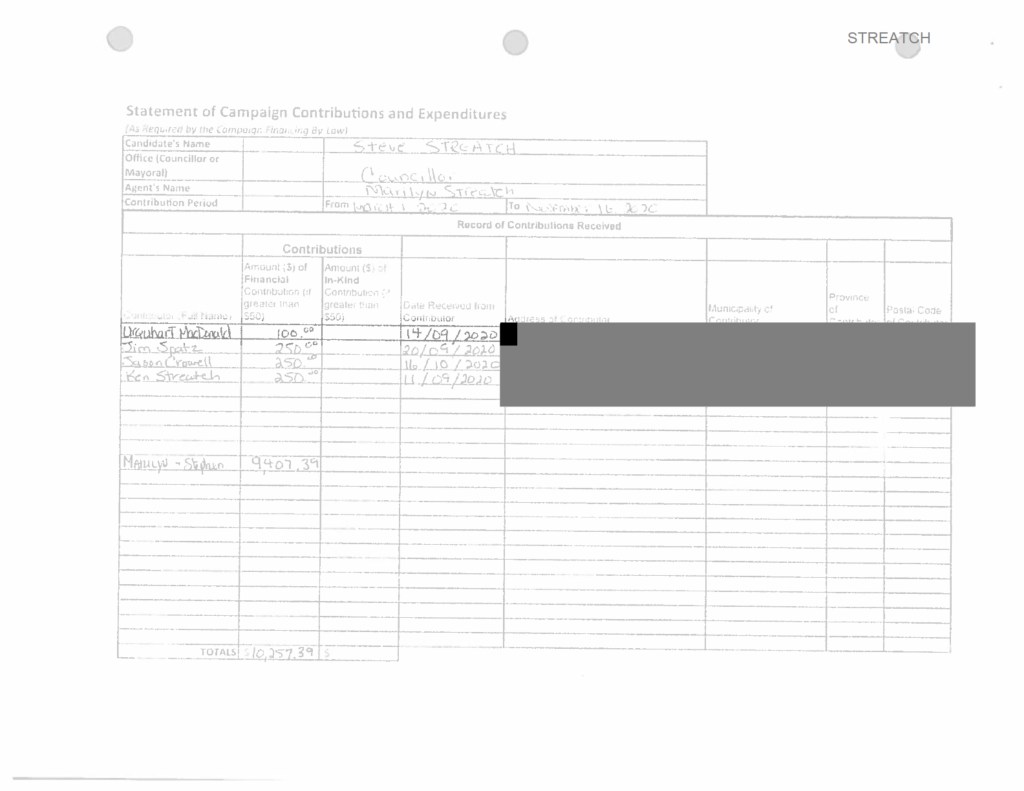 Urquhart-MacDonald and Associates is a Waverley-based business specializing in forestry equipment.

In an interview, Streatch said he believes either half or all of the money came from the company’s owner, Jake Urquhart. He wasn’t sure.

Streatch said the municipality never contacted him about the contribution after he filed his statements.

Two hundred too much

Nicole Johnson, the runner-up in Hendsbee’s district who received 28.3% of the vote, also appears to have contravened the bylaw.

Johnson’s campaign contribution statements indicate she received a donation of $1,200 from Gregory Keating. The bylaw prohibits contributions of more than $1,000 to council candidates — unless the donor is the candidate or their spouse. 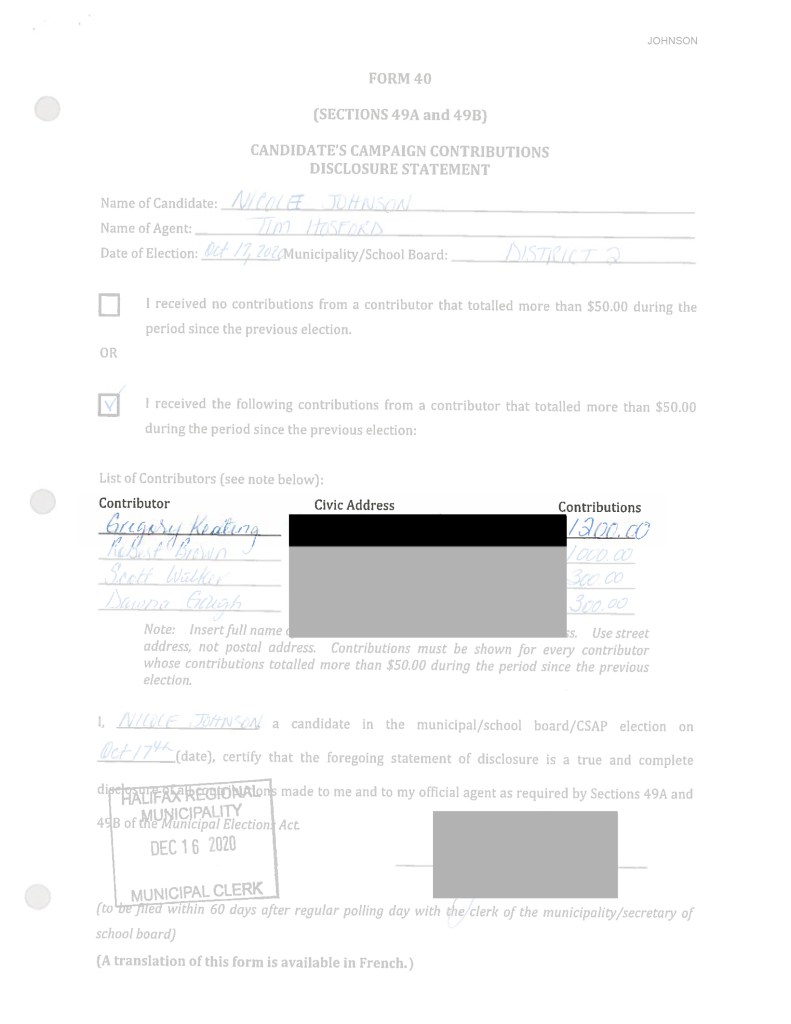 Johnson said Keating is not her spouse, but explained that Keating provided monetary and in-kind contributions totalling $1,200.

“Let me make this clear because nobody’s breaking rules here,” Johnson said in an interview. “Mr. Keating made a contribution of $800 and then there was an in-kind donation made, which totals $1,200.”

The Examiner asked the municipality to comment on each of these contraventions. In response, spokesperson Maggie-Jane Spray sent the following statement:

Staff are reviewing the process with these individuals as set out in the by-law.

As this is an ongoing process, we are not able to comment further.

These campaign contribution issues follow incidents during the campaign — a candidate in District 12 offering access in exchange for donations and a mayoral candidate wearing promotional clothing to a polling station — that resulted in zero enforcement from the municipality.

Coun. Becky Kent, who won in District 3 – Dartmouth South-Eastern Passage, had the second highest total, with $20,561.96. And former councillor Matt Whitman raised the third highest amount for his failed run at Savage’s seat, with $19,030.00. Here are the top 10:

The full campaign contribution statements, including who donated to which candidate and how much, are available in PDFs on the municipality’s website here.

Readers can search and sort the total contributions for each candidate in the Examiner’s spreadsheet below. The figures include cash and in-kind contributions from donors and candidates and their spouses, as well as the value of personal property like signs carried over from previous elections.