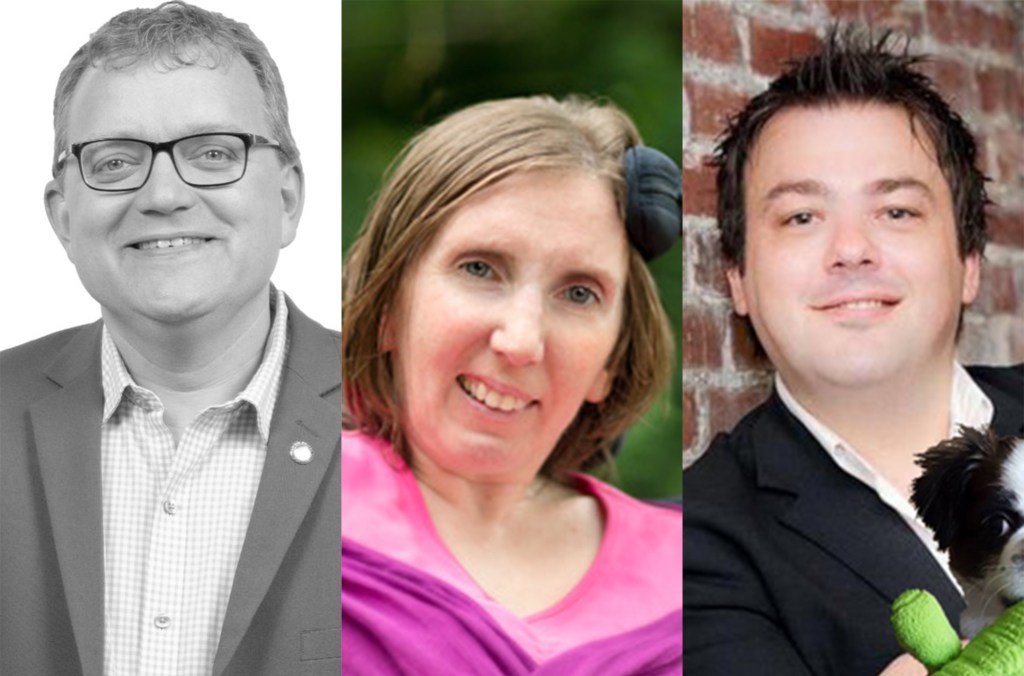 This time around, Mason faces three challengers for the district, which includes downtown Halifax and the south end.

The Halifax Examiner posed the same five questions to every candidate in this fall’s election:

Election day is Saturday, Oct. 17, but you can vote online or by telephone between Oct. 6 and 14 or in advanced polls on Oct. 10 and 13. You can check to see if you’re on the voters’ list here. Not sure which district you’re in? Type your address into the map below to find out.

Click the candidate’s name to jump to their answers, or keep scrolling to see them all:

I do not support cuts for cuts sake. I support the review of policing and public safety that my motion just launched. We need a plan for how to reform the delivery of public safety and policing.

I think that should be a goal, but I think it needs to be phased in over 3-5-7 years, otherwise the budget impacts would be severe – don’t want to cause job loss due to having to contract out radically less.

Staff are finishing the implementation plan and then HRM has to fund the administration of it and the capital investments in buildings and vehicles.  A big part of it will be expanding solar city to allow for energy retrofits. Programs and grants at a provincial, federal and municipal level need to be focused on low to middle income home owners who cannot easily afford to do retrofits and energy efficiency on their own.

Affordable housing is a complex issue, but we need to start tackling it immediately, and we will need multiple approaches.

Would you support a reduction of the Halifax Regional Police budget for fiscal 2020-2021? Why or why not?

Yes, I would. HRM should be asking the communities most affected by the police what they feel the police should be doing and what should be done by other groups through a series of public consultations. As part of this, I would like to invite someone from the Chicago Alliance Against Racist and Political Repression to present on the Community Police Accountability Councils and see if people think that would be appropriate for Halifax. Chicago is the furthest city along North America in making reforms to the police, with nearly 40% of their council signing on with their support.

Yes. Why? Because we should respect each other. HRM has to set the standard for the Living Wage – if they don’t, who will?

I was disappointed by HaliFACT 2050. I don’t think it goes far enough. It doesn’t get to zero emissions. It merely says that with technological advances, it will be possible to get there. The technical report doesn’t require buildings to be net-zero until 2030. Vancouver, Toronto, and Montreal have already declared that all new buildings must be net-zero. Why can’t Halifax join them? I propose that developers must include an accounting of every project’s GHGs – emitted during construction, embodied in materials, and operational – in their proposals, as a percentage of the 1.4 megatonnes of GHGs annually that HaliFACT 2050 declares HRM should be limited to. Without doing this, how will Halifax budget its emissions?

I prefer to walk rather than take transit. This is because I have an assistant who must operate my wheelchair, and I am lucky enough to live close enough to most events I attend to make this feasible. It is difficult to manage getting two people side-by-side through the entrance on a regular bus. I use Access-a-Bus when I can, but it’s hard when you have to book seven days in advance to get a trip.

Affordable housing is an extremely high button issue, but policy and funding can make a massive difference to create more affordable and accessible housing in Halifax.

I recall reading a few posts similar to this where monies were allocated by the Liberal Government as they “pledged $11.2 billion Canadian (U.S. $8.9 billion) to create more affordable housing during budget discussions” in November 2016.  Then again, May 2018, “The Honourable Jean-Yves Duclos, Minister of Families, Children and Social Development and Minister Responsible for Canada Mortgage and Housing Corporation, announce $13.2 billion Fund, the federal government will have an active, sustained role in housing and draw upon up to $4.52 billion in contributions and $8.65 billion in low interest loans to ensure existing rental housing is well maintained and modernized for better energy efficiency and accessibility standards”,  but I don’t recall hearing where the funds were allocated to, who or how these funds have helped, if at all?  We, the people of Halifax need to know where all these funds were allocated, and how we can access these funds to create affordable homes for people.

Halifax has been growing quickly, which is fantastic! But this means there’s more people competing over housing, which has driven our rental vacancy rate to just 1%.

Most housing is built using private funds, meaning it’s not much more expensive for Halifax to build the same. What we need to do is to increase the amount of housing being built instead, while respecting styles, existing residents, and communities. I think the best way to do this is to focus on setting up fair, simple, and standard rules/policies for council to approval and processes for companies to follow so that we don’t have to wait for years, at great expense before new buildings get approved and erected. While enforcing the rules strictly so that only companies that follow the process get to benefit from tax breaks, etc.

I do not support a reduction of the police budget for 2021-2022, I strongly believe that the police should perhaps have an increase for training, or professional development days to go over things such as how to act in certain situations without causing harm, etc.  The demands to defund the police, I believe will put people and families at risk by making police the enemy and failing to establish a serious alternative towards protecting people from violent crime(s).

In my opinion, I strongly believe that everyone should be paid a “living wage”.  Being paid minimum wage does not leave a lot to be desired, and in most cases, those individuals on minimum wage are working multiple jobs and living below poverty.  It’s very hard to do when you are a single parent, raising children, or needing insurance or transit to get back and forth to work, not to mention babysitters, if need be let alone the high cost of rental units where ever you are within the city of Halifax and not being able to afford them.  I used to own two very successful businesses for nearly a decade, I would pay my employees very well.  I believe you treat your employees well, and in return they will do the same.  I was never wrong!

This is a great initiative, however, I personally feel this should have been done many years ago.  The climate crisis appears to be getting worse every year. If elected, I will push the agenda to review HaliFACT2050 long-term climate action plan to reduce emissions and help communities adapt to a changing climate so that we can see immediate action, regardless of what that might look like at first attempt.  HalifACT 2050’s commitment to reducing emissions, switching to clean and reliable energy sources and demonstrating local government leadership needs to be reviewed.  This municipal election for example, most people are using corrugated plastic to make and advertise their campaign for their districts.  Same goes for all the plastic bags and plastic containers used at your local grocery store, how can we be for something, but at the same time just pretend it don’t exist?

I don’t use transit often.  In fact prior to Covid-19, I walked to my office daily.  I am fortunately enough to live close, however, when it rains on occasion I would take metro transit, however, it was not very often.  Halifax’s transit needs work.  The drivers are usually cranky, or delayed, or they are a minute or two ahead of schedule at which time you need to wait for the next bus, sometimes in the pouring rain.  People tend to use transit as a way to commute without worry or fear, but being delayed causes stress at work or at school/ baby sitters in the morning and being late to your job can get you in trouble.  The structure needs to be looked at and revised to accommodate the riders, not the drivers.