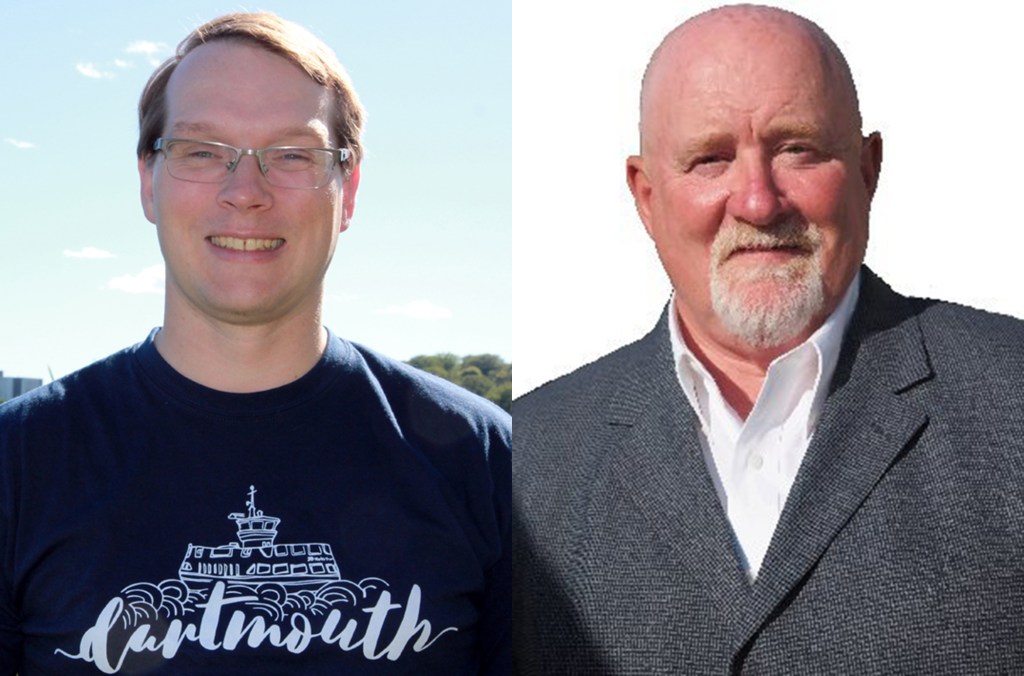 The candidates for District 5 (from left to right): Sam Austin and Mitch McIntyre.

This time around, it’s just Austin and one other candidate, Mitch McIntyre.

The Halifax Examiner posed the same five questions to every candidate in this fall’s election:

Election day is Saturday, Oct. 17, but you can vote online or by telephone between Oct. 6 and 14 or in advanced polls on Oct. 10 and 13. You can check to see if you’re on the voters’ list here. Not sure which district you’re in? Type your address into the map below to find out.

Click the candidate’s name to jump to their answers, or keep scrolling to see them all:

HRM’s challenges is that we don’t directly provide off market housing, income support, or control over rent. That’s all Provincial and it seems clear that current approaches aren’t working. HRM has asked for the power to require a certain number of units in all projects be affordable, but the Province has so far denied that request. It all greatly constrains our options, but that doesn’t mean that there is nothing we can do. What HRM can do and that I’m optimistic about is creation of a housing fund that developers of large projects in the Centre Plan area will have to pay into. HRM can then take that money and turnaround and invest in non-profits who build and operate housing. A similar model in Saskatoon (a city of roughly our size) helped construct 2,775 units, a figure that is tantalizing close to 2,750 goal set in the Housing and Homelessness Partnership.

I don’t know what will be proposed for the police budget at this point so it’s really hard to say. Salaries for all employees in HRM go up each year so just maintaining the department as it is currently means an increase of some sort. I believe there are many functions that are left to police right now that could be delivered more effectively by civilians, while leaving police to focus on the core law and order duties. That is going to take some time to figure out though. I don’t see supporting any sort of expanded budget at this point, but before I can consider reducing the budget to shift money to other areas, I want to see a plan. I was very pleased to support Councillor Mason’s motion. Policing is going to be one of the major challenges for the next Council to figure out.

We have a great Climate Change plan, but it’s aggressive in its timeline. It’s aggressive because it has to be. Climate Change is a crisis and the opportunity to adjust slowly has been lost by decades of inaction by governments around the world. We now need to change our ways and change our ways fairly quickly if we’re going to avoid the most destructive impacts. It’s too late to avoid Climate Change entirely, but we do still get to collectively decide how bad it’s going to be. When HalifACT came to Council two months ago, Council amended the motion on my urging to require that staff return with an implementation plan as part of the 2021 budget. That’s where the political commitment is needed. At budget time when the push and pull of priorities and limited resources is most acutely felt. The best plan in the world without the resources to implement it will mean nothing. It’s something I will champion during budget debates. We can do our part by electrifying transportation, investing in renewable energy, and making sure our buildings are as efficient as we can make them.

Pre-COVID I rode weekly. Since COVID hardly at all since I’m not travelling far from home for meetings or events these days. My pre-COVID patterns had me on my bike, transit, or my two feet for about 60-70% of my trips, with driving being the remainder. I often carpool with other Dartmouth councillors.

About affordable housing, this is a very difficult topic in a Covid 19 world meaning where is the money coming from. I think first we have to identify what HRM has for property and maybe the municipality has to become landlords.  The stories of people paying $1100.00 a month and when they move out and the landlord hikes the rent up for the next person to move in to $1400.00 a month.   I don’t blame a company wanting more money if they can get it. How we solve that problem is identify a location and bring in a planner who has the background in municipal housing and go with the best cost efficient ideas. I believe there are over 3000 vacant properties in the surrounding area that a person can purchase for around $10,000.00.

I do NOT agree with reduction of the HRP fiscal budget, if anything we need more money spent on Policing.  It’s a hard job, but I do believe that there should be more training for dealing with mentally ill persons.   Most times when a call comes in the Police don’t know what they are responding to until they get on scene. I do believe that the officers can get better training to deal with these types of calls.  This training  is not cheap so more money has to be spent.

Not sure what you mean by living wage, equal pay for equal work.

Again Covid 19 has changed on how we can spend the tax dollar, I haven’t read the report so I will have to answer this later. I do think that developers that want to build housing, apartment buildings or just buildings in HRM. They should be looking at some kind of environmentally friendly system into their buildings. Solar or wind for example. And no cost to the taxpayer.

Sad to say I don’t use the Transit system at all because my current job has me travelling out of the city.