Starting later this week, unhoused people in Halifax will have a place to shower for at least nine weeks.

“The pandemic has exacerbated pressures on housing and shelter across HRM and led to a substantial increase in the number of individuals sleeping rough, with limited access to basic hygiene,” municipal programs and engagement manager Lillian Ash wrote in the staff report to council.

“The ability to take care of basic hygiene needs and having the opportunity to meet social standards of cleanliness and personal appearance helps people transition to next steps while feeling more comfortable in social environments.” 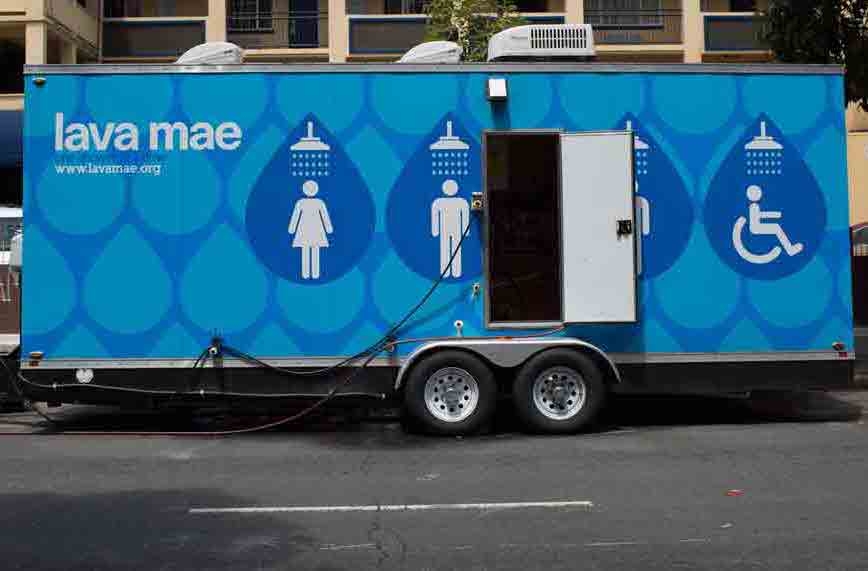 Municipal staff are looking into permanent options, Ash wrote, but they plan to get a mobile shower up and running this Friday, Oct. 1. It would be open three days a week from 1pm to 4pm.

“Staff are working to identify a location to house the shower trailer, in partnership with Mainline Needle Exchange and Halifax Regional Library. This will provide an immediate solution and would allow time to explore enhancing and refining the current shower program offered through Recreation, as well as other potential solutions,” Ash wrote.

The nine-week program is expected to cost about $17,000. Of that $6,300 goes to the trailer rental and $3,500 to two employees contracted from Mainline Needle Exchange.

In contemplating other options, Ash’s report says retrofitting a Halifax Transit bus into shower facilities would cost up to $150,000. Ash wrote that the estimated cost of a trailer and a truck is $60,000.

“The shower trailer can be customized with materials, colors and layouts, and can be a small two-shower trailer that is quite easy to maneuver and park, or as large as six to eight stalls,” Ash wrote.

Coun. Tony Mancini, who put forward the motion for a report on mobile showers in June, liked the second option, and amended the motion to staff to get to work on a report on buying a trailer.

“The idea is if we go ahead with the nine-week pilot, and we have data that comes back and proves that it is a worthwhile endeavour, I want to make sure that staff have already done the work so we can make the decision, should we invest further into this type of a project,” Mancini said.

Coun. Sam Austin questioned whether HRM is overthinking this issue, and argued, as he did in June, that the municipality should just open up its recreation centres to people who need showers.

“The emphasis on this should be on making our facilities welcoming and doing the reach out there so that people aren’t showering in the back of a trailer, that they have access to our properly built facilities, rather than emphasizing this kind of quick, temporary sort of measure,” Austin said.

That’s contemplated in the motion, directing staff to “Explore the potential of refining and expanding the shower program in HRM operated recreation centers as well as with partner facilities.”

Next, council considered a recommendation from staff to double the payout of a new grant program for affordable housing.

Council approved the grant program a year ago this week. As the Halifax Examiner reported last year, it’s a product of the Centre Plan, which requires developers constructing larger buildings to pay into an affordable housing fund. That fund is then used to pay out grants to non-profit organizations building or maintaining affordable housing.

The total annual payout was to be $200,000, and the non-profits would have to use the money in the regional centre — peninsular Halifax and Dartmouth within the Circumferential.

But in the report to council on Tuesday, planner Jillian MacLellan recommended expanding the program to allow non-profits working outside the regional centre to access another $200,000.

The new money won’t come directly from the Centre Plan developments, however, but from a surplus in planning and development.

“Staff advises that, because of increased revenues associated with development activity this year, this additional $200,000 can be allocated out of the surplus funds,” MacLellan wrote. “As such affordable housing grants can be allocated a total of $400,000: $200,000 will be allocated to projects within the Regional Centre under the Affordable Housing AO, and the remaining $200,000 would be allocated anywhere within the Municipality, including suburban and rural communities.”

Applications are open for the program now, MacLellan said, and they’re due by Dec. 21. Grants will be paid out early in 2022.

Update on tent and shelter response

HRM has scheduled a news conference for Wednesday morning “regarding ongoing efforts to help address homelessness in Halifax region.”

Mayor Mike Savage and Assistant Chief of Emergency Management Erica Fleck, who’s been assigned to lead HRM’s response to homelessness for three months, are expected to speak about “Efforts to date, including recent collaboration to support occupants of the homeless encampment at Meagher Park on Chebucto Road,” and “The status of planning to advance Council’s directive to invest $500,000 towards emergency accommodations.”

Council voted at the end of August to spend $500,000 on securing housing for people currently living in tents and emergency shelters in HRM.

Since then, it temporarily moved a few people from Meagher Park into a hotel before the rooms were rented out to others, and then it moved people into the Gray Arena in North Dartmouth.

On Sunday, the group of volunteers at the park, known as P.A.D.S. (Permanent, Accessible, Dignified, and Safer) Housing Network, announced it was ending its 24-watch on the park, and it “will transition to a resident-run system.”

In a Twitter thread announcing that decision, volunteer Drew Moore is quoted as saying that everyone at the park was willing to go to a hotel, but “the alternative housing options currently on offer are a significant downgrade from the initial promises, which never materialized.”

In an information report on the council agenda on Tuesday, Paul Johnston, municipal director of government relations and external affairs, wrote that a plan “to peacefully and voluntarily close the encampment at Meagher Park is well underway.”

“Staff are aware of the potential for health and safety issues arising at Meagher Park, as well as its proximity to a residential area, and are working closely with volunteers and service providers to identify options and move individuals safely,” Johnston wrote. “The plan is contingent on relationships being maintained between service providers and volunteers at the park and will not be enacted unless temporary accommodations can be identified for those living in the park.”

The report said the municipality is still using Gray Arena as a shelter, but it’s “identified a few potential sites (both land and buildings) that may be available for temporary housing” and it’s “assessing the appropriateness of use for this purpose, as well at the potential costs to refit, lease, etc.”

“If options are confirmed, service providers and provincial staff will be engaged to determine the possibility of organizations providing staff support. However, the potential use of some of these properties may provide medium- to long-term solutions and not be available in the immediate future,” Johnston wrote.