You are here: Home / City Hall / Halifax cops struggle to sell their body-worn camera plan to police board 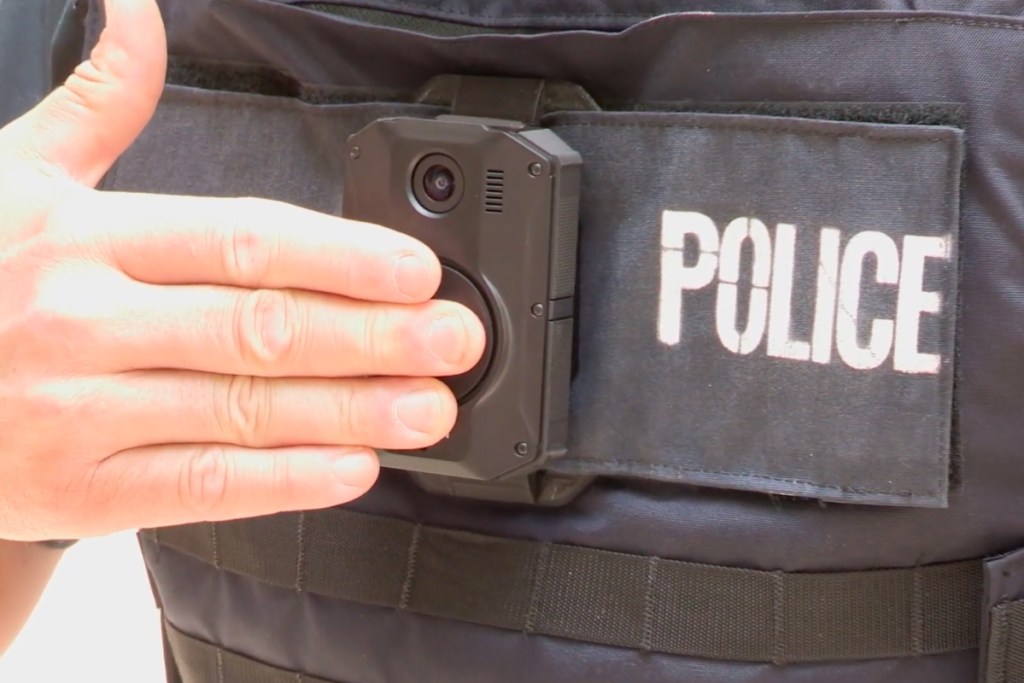 Toronto Police Sgt. Sean O’Brien demonstrates how officers turn body-worn cameras on and off in a video shown to the board on Monday. — Photo: Screenshot/ Toronto Police Service / YouTube

Citing a lack of research and policy around the technology, the city’s board of police commissioners isn’t ready to green light a plan for body-worn cameras for Halifax Regional Police officers.

As the Halifax Examiner reported on Friday, HRP wants to equip all officers with body-worn cameras by 2023. The total cost, over five years, is estimated to be $3.7 million. That number includes the initial capital cost of about $800,000 for the cameras, along with annual data storage, licensing, and other costs and the creation of four new civilian jobs.

HRP Chief Dan Kinsella and Insp. Greg Robertson, HRP’s Freedom of Information and Protection of Privacy (FOIPOP) coordinator and the leader of its body-worn camera committee, presented the plan to the board at its virtual meeting on Monday.

“We believe that body-worn cameras have a strong potential to improve transparency, civility, training opportunities, evidence, and opportunities to build trust,” Kinsella said.

Robertson showed the board videos from Toronto Police showing how officers turn the cameras on and off, and how they upload the footage at the end of a shift — though the clerk’s office couldn’t get the sound to work.

Robertson said officers would turn the cameras on during “all calls for service, interactions with the public when asking for information or investigating incidents.” They wouldn’t be used in hospitals, schools and churches, or when turning it off could diffuse a situation.

“Any instance which a body-worn video is turned off, the member would be expected to clearly articulate why they’re turning it off,” Robertson said.

Another video, from Axon, one of the biggest body-worn camera makers, showed how their technology can be used to blur out citizens’ faces to redact them for public release. One of the four citizen jobs HRP would create for body-worn cameras would help Robertson with FOIPOP requests for the footage.

Commissioner Carole McDougall asked police why they’re opting to go directly to adopting the technology, rather than testing it out with a smaller sample first.

“The vast majority of the pilot programs turned into deployment,” Kinsella said.

“With the size of our service and the community that we serve, it’s the best practice now to go to right to deployment if you are thinking about going to body-worn cameras.”

Kinsella said police could run a pilot first for about $200,000 a year, but they’d just end up deploying them across the force.

“At the end of the pilot, the recommendation will be that we get body-worn camera program here with HRP,” he said. “That is the consistent message from all police services across the country, and particularly major police services such as Halifax.”

That’s not true. As the Nova Scotia Policing Policy Working Group noted in its letter in opposition to the cameras this summer, Montreal’s police force concluded after a year-long trial that the cameras weren’t worth the money or the hassle. Edmonton’s police force ran a three-year pilot project, and “found no quantitative evidence that [body-worn video] has an impact on complaints” and that there was “no evidence from the pilot that it reduced use of force incidents.”

Coun. Lindell Smith challenged police on the efficacy of the technology and the lack of any research in the report.

“What would have been beneficial for me, and I’m not sure if other folks feel the same way, but it would’ve been good to see cited some of the research that has happened around body-worn cameras,” Smith said.

“And when I think about the complexity that we’re trying to deal with as a city, especially dealing with race, many of the reports and scholarly papers around that speak on the fact that body-worn cameras don’t actually deal with those issues that advocates and community members are feeling when it comes to race. Some of the research even said that adding cameras just increases the perception of institutional racism because now you’re creating more surveillance on residents, especially those who are of colour and are over-monitored in general.”

After Smith spoke, Kinsella admitted “the data is inconclusive” on the efficacy of cameras.

“They haven’t been in operation for a tremendous amount of time to be able to do the analysis and the review,” he said.

There is in fact years of research suggesting body-worn cameras are ineffective. As Tim Bousquet noted in the Halifax Examiner in June, “A team of researchers from Yale University and the Metropolitan Police Force conducted a randomized-controlled trial among 2,200 cops in the Washington, D.C. police force.” Their findings, published in 2017: “We are unable to detect any statistically significant effects.”

Smith said he couldn’t support the plan without a better understanding of the policy around the use of body-worn cameras. He suggested police should develop policy first, then bring it to the board and ask for approval to implement cameras.

Kinsella said police could write draft policy, but they’d need some direction from the board on whether it’s looking for a full deployment or a pilot program.

Coun. Lisa Blackburn wondered aloud whether the police were ready for a full deployment of the cameras without policy in place.

“If we don’t have those policies in place yet, are we in a position where we’re ready for a full-on adaptation of the body-worn video? Because this is going to require rigorous policy,” Blackburn said.

Rather than choosing between a pilot and a full deployment, the board opted to defer the matter, pending more information from police on the research around body-worn cameras and a policy framework on their use.

The delay could mean the cameras don’t make the 2021-2022 budget. They’d need to be included in both the Halifax Regional Municipality capital budget and the police operating budget at a total of $890,000 for the coming fiscal year.