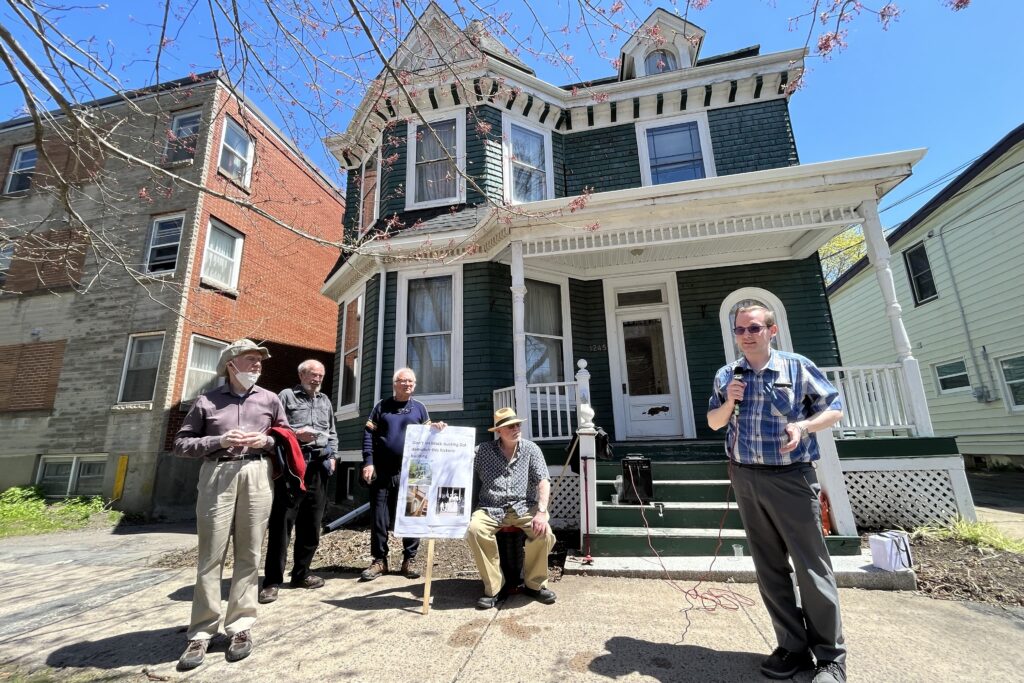 William Breckenridge speaks at a rally in front of 1245 Edward St. in Halifax on Thursday, May 12, 2022. — Photo: Zane Woodford

A committee of council has recommended in favour of heritage registration for a Dalhousie University-owned building at risk of demolition.

The Heritage Advisory Committee held a special meeting on Friday to consider a third-party request to include 1245 Edward St. in the municipal registry of heritage properties. Despite community opposition, Dalhousie wants to demolish the house, built in 1897, and as the Halifax Examiner reported on Thursday, it has a new permit to do so after an early start last week.

But a heritage registration will complicate the university’s plans.

“This is the grandest house, the largest house, the first house built, so it acted as an anchor for that street and attracted others who followed,” heritage committee chair Patrick Connor said during Friday’s meeting.

“And I think also, being the largest and grandest house next to a collection of smaller salt boxes, if this house gets demolished, it’s going to very much diminish the street and maybe even put the rest of the houses at risk.”

Part of what makes the building special is its unique architecture, planner Seamus McGreal wrote in the staff report to the committee.

“The residential building at 1245 Edward Street (1897) exhibits a mix of styles consistent with the transitional period between the stylistic periods know as Second Empire (1860-1880) and Queen Anne Revival (1885- 1900/1910),” McGreal wrote. “The Second Empire style is defined by the mansard roof and ornamentation. The Queen Anne Revival style is defined by the asymmetrical façade, irregular rooflines, overhanging eaves, corner turret, unusual windows, and veranda.”

The committee scored the property 64 out of a possible 100 points, triggering a recommendation t0 council to add the property to the heritage registry. Council already voted to schedule a heritage hearing, pending the committee vote, and that will likely happen at the end of August. It has to happen at least 30 days after Dalhousie is notified.

Planner Aaron Murnaghan told the committee that once the university receives a letter notifying it of the heritage hearing, the property gets some protection.

“The building will be protected from demolition for 120 days or until it’s officially registered by council,” Murnaghan said.

Until Dalhousie gets the letter, it’s technically free to demolish the building. But Murnaghan said the process isn’t that simple.

“My understanding is that there is ongoing abatement processes on the property and as of yesterday, there were still some permits that had not been received by Dalhousie that they would likely need to start the process of actual demolition,” Murnaghan said.

“So it is it is likely that the house will still be standing when they receive notice.”

If council does register the property, Dalhousie will have to apply to council to make any substantial alterations to it. Under the provincial heritage legislation, the building could still be demolished after three years if council said no to an application.

The university released a public statement on Friday, attributed to Gitta Kulczycki, vice-president of finance and administration:

While there are many important aspects associated with protecting buildings that have genuine heritage value, Dalhousie does not believe 1245 Edward Street meets those criteria. Additionally, the property is in very poor condition. Dalhousie’s goal is to build a sustainable, accessible campus that supports modern housing options that contribute to greatly needed supply, with buildings that are developed to high standards of safety, efficiency, and accessibility. 1245 Edward Street does not meet these objectives. Investing in preservation of low-density housing that does not meet these criteria is not the answer to affordable housing needs for students or citizens.

We will work with regulatory bodies to ensure the building is secure from an environmental and public safety perspective, while respecting proper processes and procedures. This may entail limited activity on site.

Dalhousie looks forward to the opportunity to share its perspective throughout this process. To respect that process, while it proceeds, we will respectfully limit further comment.