You are here: Home / City Hall / Getting rural transit right 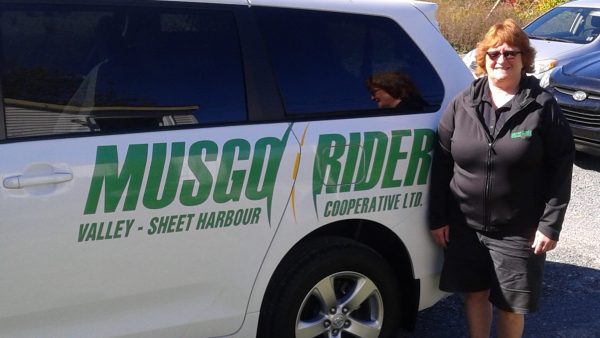 Halifax council has agreed to double the available funding for organizations like MusGo Rider and Bayrides, which provide door-to-door and chartered transit services for their respective rural communities, making sure thousands of people in the region can get to work, medical appointments, and simply access the rest of the municipality without owning a car.

That’s good news because rural dial-a-rides are growing. This year Bayrides ended up taking people nearly twice as far as it had projected, and a whole new organization, East Hants Rider, joined the funding roster. Next year will see a new service sprout up south of Spryfield, in the vacuum left by the closed Halifax Transit route 402.

However, the new right-sized funding envelope doesn’t kick in until fiscal year 2019-20, which brings me to the bad news: Council is really sticking it to rural transit organizations this fiscal year.

Last year Halifax budgeted $220,000 for rural transit funding. That was meant to cover lump sum grants to three organizations (MusGo has an Eastern Shore and Valley-Sheet Harbour division), and then a per kilometre rate of 50 cents, based on projections by the organizations themselves.

Then in June, Halifax added East Hants Rider to the mix, as well they should, since the organization helps transport rural residents to “medical appointments, job interviews, education classes and skills training, grocery shopping, personal errands, social events, gathering with friends and family, sporting and after school activities,” according to its website.

But instead of increasing the budget by about $29,000 to add another service area and organization, HRM financial planners just reduced the per kilometer subsidy to fit the total budget. MusGo et al were now to expect 43 cents per kilometre in municipal subsidy. Well, at least it was better than the previous year’s subsidy, which only clocked in at 42 cents per kilometre, because, you guessed it, the organizations grew and the budget didn’t.

But then it got worse. By September it became clear that Bayrides was blowing past its original projection for kilometres travelled (it ended up almost doubling that projection). MusGo Rider and East Hants Rider were closer to projected numbers, but still showed increases. As quarterly payments went out based on kilometres travelled, the pot drained faster than was budgeted for. So Halifax Transit let organizations know that the final quarterly funding payment would drop from the already reduced rate of 43 cents per kilometre. In a report to council dated February 18, Halifax Transit proposed the final quarterly subsidy be reduced to 15 cents per kilometre.

On Tuesday, Regional Council will decide whether to let this happen.

Councillors have options. Although the staff recommendation is to simply let the rural transit funding chips fall where they may, staff does outline the alternatives. With an additional $40,000 allotted, Halifax could cover the subsidy at 43 cents per kilometre. With an additional $75,000, the city could cover the subsidy at its original intended rate of 50 cents per kilometre. In either case, the money would come from the Planning Department’s unspent $560,000 operational surplus.

The sting of the shortfall, should council go through with it, will mostly be felt by MusGo Rider, which has already cut back from dispatching four vehicles to three. Bayrides also stands to lose out, but because its subsidy this year has already surpassed what had been projected, Bayrides is not facing immediate service cutbacks. Meanwhile MusGo director Jessie Greenough says her organization will have to cut back further to two vehicles, if Halifax doesn’t come through this quarter.

UPDATE!  On March 26, 2019, councillors voted to allot an additional $40,000 to the rural transit program for this fiscal year.

Incidentally, here’s how much the city of Halifax, and Halifax Transit in particular, need organizations like MusGo Rider.

Right now MusGo Rider is exploring the possibility of running a fixed route small bus system between Porter’s Lake and Portland Hills, along highway 207, through Lawrencetown and Seaforth, etc. You can check out its feasibility study which is being presented this week to council’s Transportation Committee. 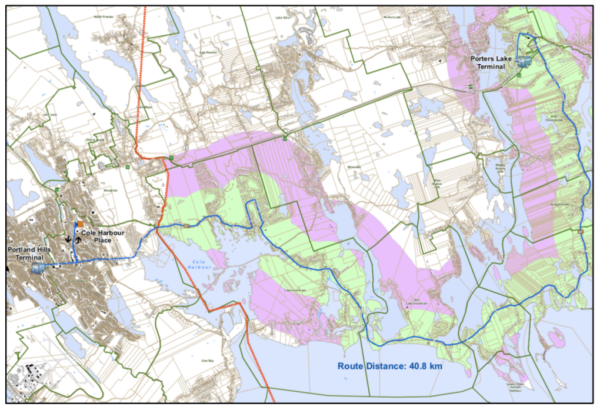 Map of proposed fixed route to be operated by MusGo Rider, from their feasibility study.

MusGo Rider is hoping to have the route up and running by the time Halifax Transit eliminates part of route 401, which is reportedly slated for September 2020.

The new project in Spryfield, expected to be operating a pilot sometime in the next year, will also help fill a gap left by Halifax Transit’s discontinuation of the route 402.

Then there’s Bayrides.  Seventeen per cent of the rides Bayrides provided last year fed into the Metro X service in Upper Tantallon. Another 40 per cent were for people working in the within the community. 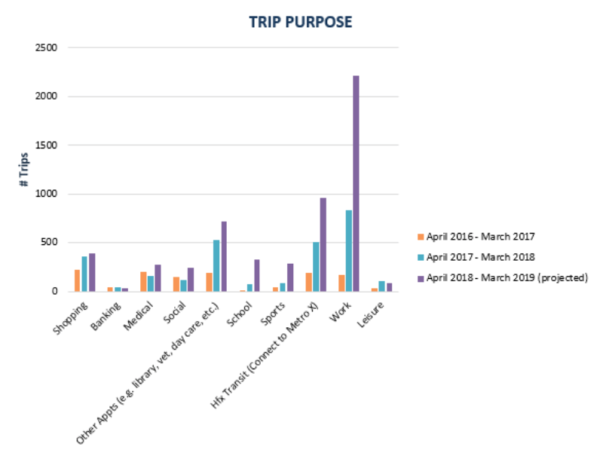 Bayrides’ statistics on trip purpose. Seventeen per cent of riders were on their way to/from a Metro X bus, and 40 per cent were working in the community.

It’s a huge relief to know that next year, because of the right-sizing of the rural transit funding budget, organizations like MusGo and Bayrides can keep growing and not face the same uncertainty.

But beyond right-sizing the budget number, isn’t there a procedural problem here?  The way this funding program is managed seems unrealistic and unfair.

When I was a kid, my brother used to eat all the “good” cereal, like a maniac, as soon as it arrived in the house. I would protest, but he would simply shrug and say, “you’re welcome to have as much as you like, as long as it lasts.”

That seems awfully similar to the situation being created here by the city.

The problem seems to be that Halifax financial planners want sure things. They want a number approved at the outset of the fiscal year that won’t change, even though services and costs are changing. The organizations operating these services deal in everyday reality. Their costs don’t go down when another service opens up or expands. So why should their funding be set up to?

There are other budgets at HRM that have fluctuating costs. I’m sure we would all be shocked to find out that Halifax Transit simply stops buying gas once it hits its projected spending for the year on fuel. Of course it doesn’t. (I mean, there’s gotta be a theoretical ceiling, but setting the ceiling exactly at the level of your projected expenses is unreasonable.)

There simply must be a better way to manage rural transit funding. Here’s hoping Halifax staffers have the will and the wherewithal to find it.