You are here: Home / City Hall / George Tsimiklis is the worst landlord in town

Yesterday, CBC reporter Elizabeth Chiu beat me to a story I’ve been working on for months:

Kent Mullin is homeless but in a way, he’s relieved. His apartment — unsafe, a fire hazard and infested with cockroaches, mice and bedbugs — wasn’t much better than being on the streets.

He was one of several people forced to leave 22 Evans Ave. earlier this week. The evacuation of the building, in Halifax’s Fairview neighbourhood, was ordered by police in a bylaw crackdown by the municipality.

I became aware of 22 Evans Avenue way back in 2015, when I started researching my Dead Wrong series. The building will show up as a bit player in Part 5 of the series, which I hope to publish soon.

Through the course of my research and reporting I’ve talked with many people living on the margins of society and a quite interesting fellow who is a sort of wildcat activist for sex workers. Through these people, I became aware of the horrific conditions at 22 Evans Avenue. I made a few trips out there, photographed it, talked to people. Then, one of the residents gave me this video, which the resident recorded at 22 Evans Avenue:

The building is owned by George Tsimiklis, and so I did a property search and started tracking down his other properties, many of which he rents through his company, Olive Branch Properties. I then pulled court records and bylaw infraction records related to those properties. It was a time-consuming and expensive effort.

Then, in July, right in the middle of this research, Tsimiklis hit the news because he tore down the Cleveland House on Young Avenue. And earlier this month, another Tsimiklis — Stavros — was in the news for beginning to tear down another Young Avenue house while people were actually living in it. George and Stavros are brothers, and they share the same business address at Suite 707 in Fenwick Tower. George Tsimiklis Holdings LTD has been incorporated since 2004, and both George and Stavros have alternated as directors and president.

So I really wanted to nail this story. But what can I say? I hit something of an exhaustive brick wall last month and had to take a vacation. And I haven’t been able to return to the story since my return.

But now that Chiu is reporting stuff I should’ve reported months ago, let me spit out what I have.  What follows is by no means complete.

George Tsimiklis owns a range of rentals, some in better shape than others, but a big part of his portfolio is rentals to people on social assistance.

Here are the properties George Tsimiklis owns, with their assessed values in parentheses. Following each property are all the bylaw infractions and court cases related to the property than I’ve managed to find. In a few cases I’ve added additional notes.

Readers might remember that the night Brenda Way was murdered in 1996 (before Tsimiklis owned the building), Robin Hartrick stopped by a crack house at 88 Windmill Road, apartment 2, looking for Brenda.

Bylaw inspectors have visited the building five times in the last three years:

There has been one bylaw inspector visit:

October 13, 2015 — plumbing and window leaks, and problems with a thermostat and an electrical outlet. Owner was ordered to remedy.

There have been 14 bylaw inspector visits:

There have been two bylaw complaints:

September 17, 2014 — weather tightness, plumbing, and rodents; owner ordered to rid the premises of rodents, fix weather tightness and plumbing, heat, smoke alarms and fire extinguishers
January 12, 2015 — no heat; this was fixed along with the previous complaint

October 26, 2015 — a complaint about mould, a falling ceiling, water egress, and a refrigerator; owner ordered to repair all of those issues and additionally to fix fire alarms, fire extinguishers, and an exit light
April 28, 2015 — a complain about doors that don’t lock; no action was taken

I started visiting the building at about this time, and over the next few weeks spoke with current and past residents. They told me that at one point only a couple of units on the third floor had running water, and when those toilets were flushed raw sewage would come up in the tubs in the apartments on the lower floors.

The residents told me they were afraid to make any complaints and were told that if they withheld their rent their social assistance would be cut off. I asked the Department of Community Services if this were true, and received the following response from spokesperson Heather Fairbairn:

The Department of Community Services does not get involved in tenant–landlord disputes. It is our process to refer either party to the Residential Tenancy program for dispute resolution. However, caseworkers would advise their clients that the Residential Tenancies Act does not allow a tenant to simply withhold rent in the case of a dispute.

If a client advises the department that they intend to withhold rent, the rental portion of their Employment Supports/Income Assistance (ESIA) payment would be withheld until such time as payment to the landlord is reinstated. The department would then work with the client to address any arrears that may have accumulated. Other supports provided by the department such as personal allowances, utilities (if paid separately) and special needs would not be affected.

The department would neither withhold rental supports or provide a direct payment of rental fees upon the request of a landlord.

It’s not dated, but at some point an inspector noted that work to repair fire damages was done without a permit. 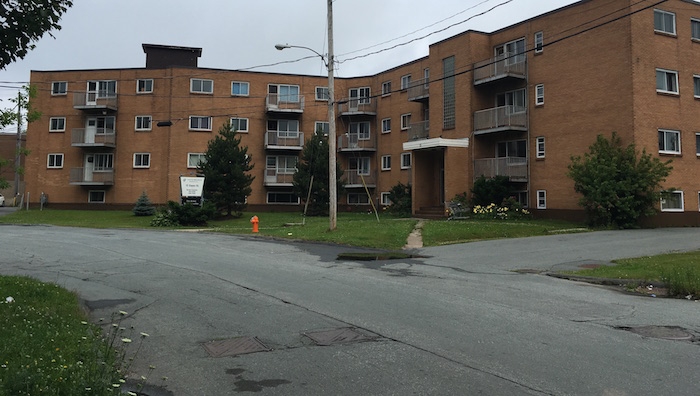 May 11, 2015 — water damage, falling ceiling, mould
July 21, 2015 — fire extinguishers not present, broken fixtures, water infiltration and damage to walls; owner was ordered to fix all the above.
January 6, 2016 — insects, cleaning issues, and doors that didn’t properly close; no orders issued
January 27, 2016 — insects and animal waste in common areas, no heat; no orders issued
July 18, 2016 — a simple notation that the file was closed.

I visited the building in June, and it had been emptied of tenants. When I arrived, the front door to the building was wide open, and I freely walked around the three-storey building. Many of the apartment doors were open, with trash accumulated. On the basement level, water poured straight out of the ceiling, to the point that I feared for my safety and fled the building.

There is an extensive city file related to 15 Dawn Street. I’ll relate its contents tomorrow.

There have been two bylaw complaints:

These property was the subject of November 9, 2013 Chronicle Herald article written by reporters Ian Fairclough and Sherri Borden Colley:

A Fall River woman who thought she was getting help when she was offered a bigger apartment by her landlord is now trying to find another home after her water was turned off and her property manager told her she had to leave.

Tylisha Way and her 21-month-old daughter, Nevaeh, moved into a four-unit building on Lockview Road in June because her former apartment was too small.

She’s been asking to have the heat turned on since late September. On Thursday, her mother stopped by at suppertime and found that the water wasn’t flowing.

In an interview Friday, Way said she called the property manager about the lack of services and was told: ‘We’re not going to turn the water back on. (The owner) is coming in here and he’s just tearing the place down, so you’ve got to get out.’”

But the Residential Tenancies Act doesn’t allow people to be evicted unless their payments are in arrears, there are behaviour problems or the building is condemned.

That makes Way and her mother wonder if the building was already condemned when she moved into the two-bedroom apartment, which costs her $750 a month.

George Tsimiklis also owns about $5.3 million worth of property in Fletchers Lake, $2 million in Bedford, and $2.4 million on Young Avenue.

My files on Tsimiklis and his properties are too extensive for one post. I’ll return to this subject over the next few days.