You are here: Home / City Hall / Former Halifax cop Chris Mosher has received a cash payout and a new job from the city 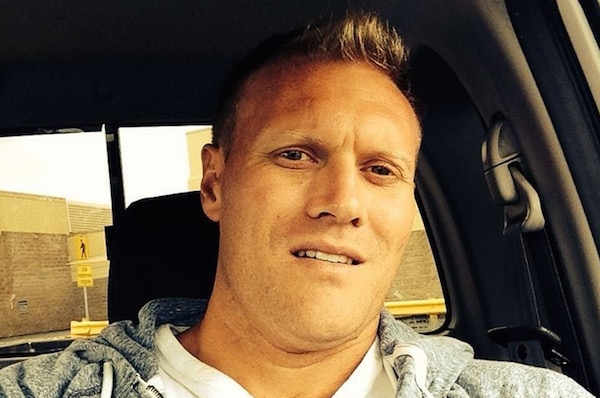 Mosher faced difficulties even before he became a cop. “When he was still a cadet, Mosher was dismissed from the regional police training program,” reported Dan Arsenault for the Chronicle Herald. “He was subsequently reinstated.”

Mosher was hired by the Halifax Regional Police Department in 2008. In 2009, he was charged with assaulting a woman during a domestic dispute, but that charge was subsequently withdrawn with the crown saying “there was no realistic chance of conviction,” reported Arsenault.

In December 2012, Mosher was charged with sexual assault and “administering a noxious thing with intent to aggrieve” after an incident on the night of November 2, 2012; a woman who had been dating Mosher for a week said Mosher had intercourse with her without her consent after an evening of drinking at Mosher’s Eastern Passage home. After he was charged, Mosher was suspended from the police force, with pay.

But the charge of administering a noxious thing was dropped before trial, and Mosher was acquitted on the sexual assault charge in January 2016; “it cannot be said beyond a reasonable doubt that (the complainant) did not give consent,” ruled Judge Flora Buchan.

During the three-plus years awaiting trial, however, Mosher faced additional charges for numerous violations of the terms of his release on the sexual assault charge, and one charge of impaired driving.

After the 2012 sexual assault charge, Mosher had been released from custody with the standard conditions applied — including that he abstain from drinking alcohol outside of his home or with a woman. But in September 2013, Mosher was charged with two violations of his conditions, for “drinking outside of his residence and also in the presence of a woman who is not a family member,” for an August 22, 2013 incident in Lunenburg.

On October 2013, Mosher was charged with two more counts of breaching his conditions by drinking outside his residence on July 7, 2013 in Eastern Passage. He was later charged with impaired driving, related to the same incident.

In December 2013, the Serious Incident Response Team (SIRT) charged Mosher with four more counts of breaching those conditions by drinking over the course of seven months in 2013 at four locations in Lantz, Dartmouth, and Halifax.

In May 2014, Mosher was arrested at the Martini Bar on George Street in St. John’s, Newfoundland, and charged with nine counts of breaching his conditions. After spending about three weeks in jail, Mosher pleaded guilty to four of the counts and was sentenced to time served.

Back in Nova Scotia, the impaired driving charge was dismissed in June 2015, when prosecutors didn’t present any evidence in court. That summer, Mosher pleaded guilty to four counts of breaching his conditions and was conditionally released with a year of probation. The remaining charges appear to have been dropped.

On February 7, 2017, Colleen Kelly, the Executive Officer to the Chief of Police, issued a decision disciplining Mosher, and Mosher was fired on February 15, 2017.

The police union, the Halifax Regional Police Association, appealed that decision and Mosher’s firing to the Nova Scotia Police Review Board. While the matter was under appeal, the city, the union, and Mosher signed onto the confidential settlement agreement.

The settlement agreement states that “Mosher suffers from an alcohol substance use disorder (hereinafter the ‘disability’), which disability contributed to Mosher’s conduct forming the basis of the majority of the disciplinary breaches, and which is aggravated by the stress inherent in police work.”

The settlement agreement in effect says that because Mosher has a disability, the city should not have fired him but instead should have provided a “reasonable accommodation” for his employment — that is, a job that doesn’t involve policing.

A separate document, a “Disability Accommodation Agreement,” mandates that the city place Mosher in “a permanent fulltime employment position in the Parks & Recreation or Transportation & Public Works business units, comparable to the work previously performed by Mosher in his prior employment as a labourer.” Such a position will entail, in part, driving a vehicle.

Mosher was to be hired immediately upon approval of the agreement by the Police Review Board. That approval was issued on August 31.

However, in recognition of Mosher’s past problems with alcohol, the Disability Accommodation Agreement says that as soon as he was to be hired back by the city, Mosher was to be placed on unpaid administrative leave for up to six months. Before he could actually start working, Mosher was to meet certain conditions, which included passing tests that confirm he has been drug- and alcohol-free for six months and having a substance abuse professional attest that Mosher is in treatment.

City spokesperson Brendan Elliott confirms that Mosher is currently employed by the city, and the Halifax Examiner has received unconfirmed accounts that Mosher is now working with the Parks department.

On the job, Mosher will be subject to scheduled and unannounced testing for alcohol. If any alcohol is detected during working hours, he will be fired.

In exchange for signing the settlement agreement, Mosher committed to “irrevocably withdraw his current review proceeding before the Nova Scotia Police Review Board of the HRP [Halifax Regional Police] written disciplinary decision dated February 7, 2017, both in respect of his challenge of the disciplinary breaches and his challenge of the February 15, 2017 termination of his employment as a HRP officer.”

The settlement agreement includes a confidentiality clause prohibiting any party from disclosing it to third parties except as necessary to implement it.

The settlement agreement states that “Mosher’s placement will be effected by creating a new overstaffed position in an existing job category under the Collective Agreement” with the public employee union — that is, with the Halifax Civic Worker’s Union/ CUPE Local 108.

“The Police Review Board committed a reviewable error by not providing CUPE with notice of the proceeding [that is, the Board’s approval of the settlement agreement, which made Mosher a member of the union] despite CUPE having a direct and interest in the matter,” writes Jason Edwards, CUPE’s lawyer, in the court application.

CUPE is asking the court to set aside the Police Review Board’s approval of the settlement agreement and to order the Board to reconsider the matter.

CUPE will appear before a judge to argue the case on Monday, October 29.