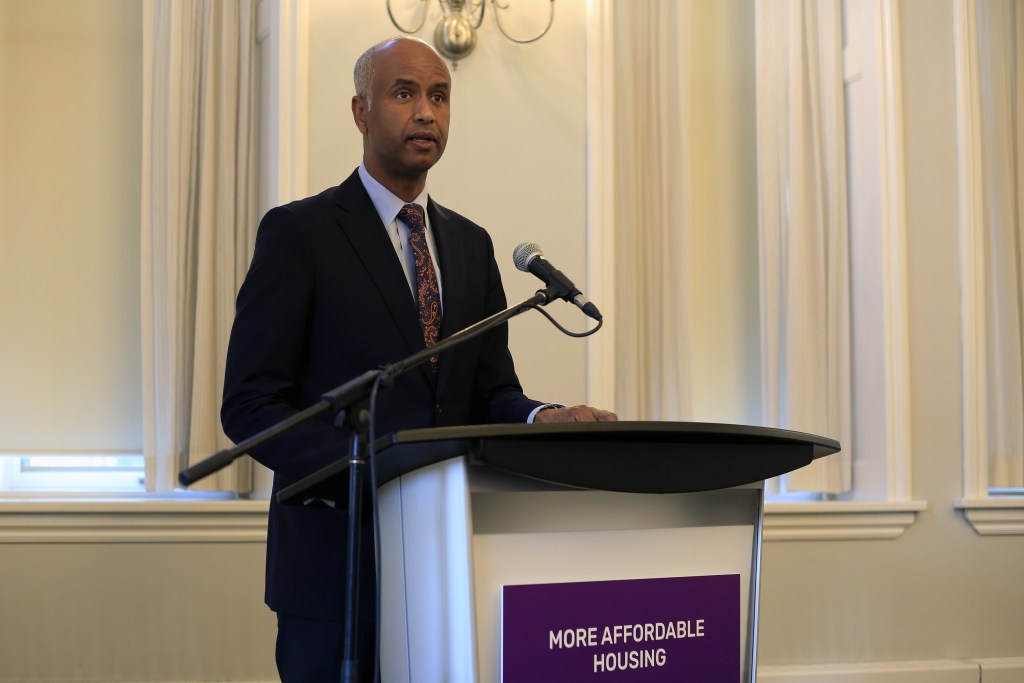 Halifax will hand out $13 million in federal funding to create at least 43 units of deeply affordable housing in the next year.

Ahmed Hussen, federal Minister of Families, Children and Social Development and Minister Responsible for Canada Mortgage and Housing Corporation, made the announcement at Halifax City Hall on Wednesday.

The money will come from the second round of the cities stream of Rapid Housing Initiative funding — $500 million for cities across Canada for affordable housing projects. Under the first round, Halifax got $8.7 million, and used it to pay for 52 units of affordable housing from three local nonprofits. As the Halifax Examiner reported in December:

The three projects recommended by staff and endorsed by council are:

Together, the three proposals will create at least 52 units, with more than 30% targeted to Indigenous people and 48% targeted to women.

All three projects will need to be completed by December 2021 or the municipality will be on the hook for the money, and “HRM will also need to ensure units are targeted to those who are homeless or at risk of homelessness and that rents are not more than 30 percent of their income.”

During that first round of funding, the municipality had just 30 days to solicit proposals and submit them for funding, and the proposals had to be for either modular housing — built using prefabricated pieces — or renovations of existing buildings. For this second round of funding, the time limit is a still-tight 60 days, and the units can be completely new builds. Twenty-five percent of the funding must go to units for women.

The time limit for construction is the same as last time: nonprofits will have one year to build.

The announcement comes as Halifax tries to get people living in emergency shelters in parks to leave. The city set a deadline last week for residents to leave, and for the anonymous community group building the shelters, Halifax Mutual Aid, to remove them from parks. After removing three of the shelters (two of which were occupied, according to Halifax Mutual Aid) days early, the city let the final deadline come and go on Tuesday. 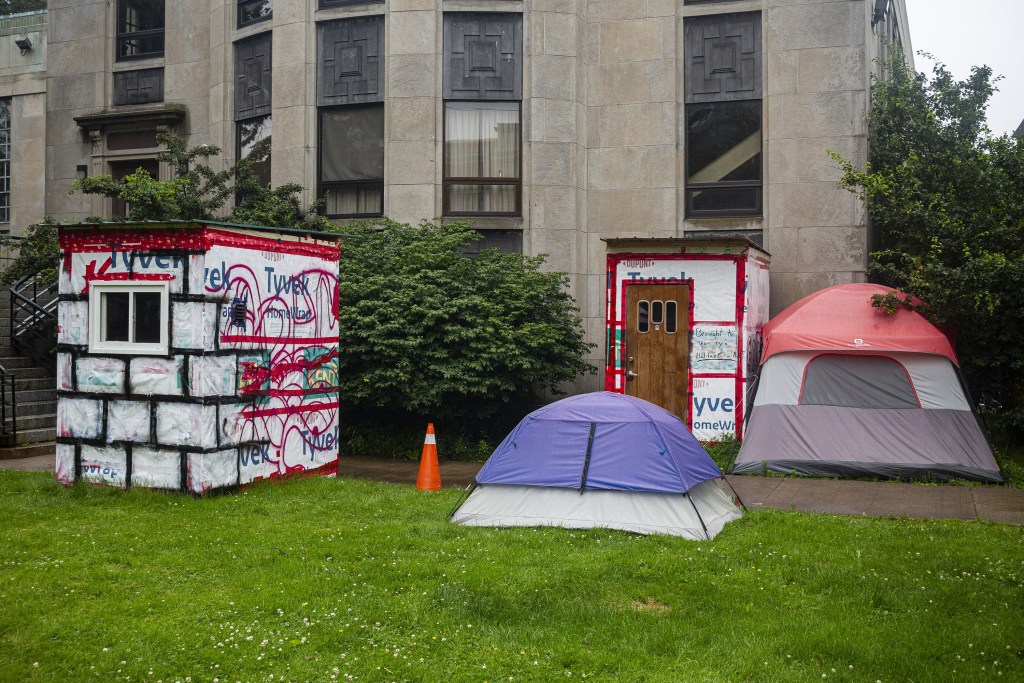 The official policy on the shelters seems to change daily. Until last week, the municipality said it would “not force the eviction of residents from homeless encampments unless and until their need for adequate housing is met.” Then the line became, “The municipality will allow occupants of homeless encampments to remain until adequate housing has been identified and offered, or until the health and safety of the occupants or public are at risk.” The city even went so far as to revise a previous statement.

The Examiner asked on Tuesday whether Halifax was now delaying the removal of the shelters.

“Whenever an occupant vacates a temporary shelter – prior to, or as of the deadline of July 13 – the municipality will take steps to remove the vacant shelter in as timely a manner as possible,” spokesperson Laura Wright replied. That was exactly what the municipality said on Friday.

And then Mayor Mike Savage started taking the lead on messaging, telling media on Tuesday that he didn’t want to “force a deadline.” Following Wednesday’s announcement, he faced more questions about the city’s handling of the shelters, but wouldn’t definitively say that the shelters could stay. 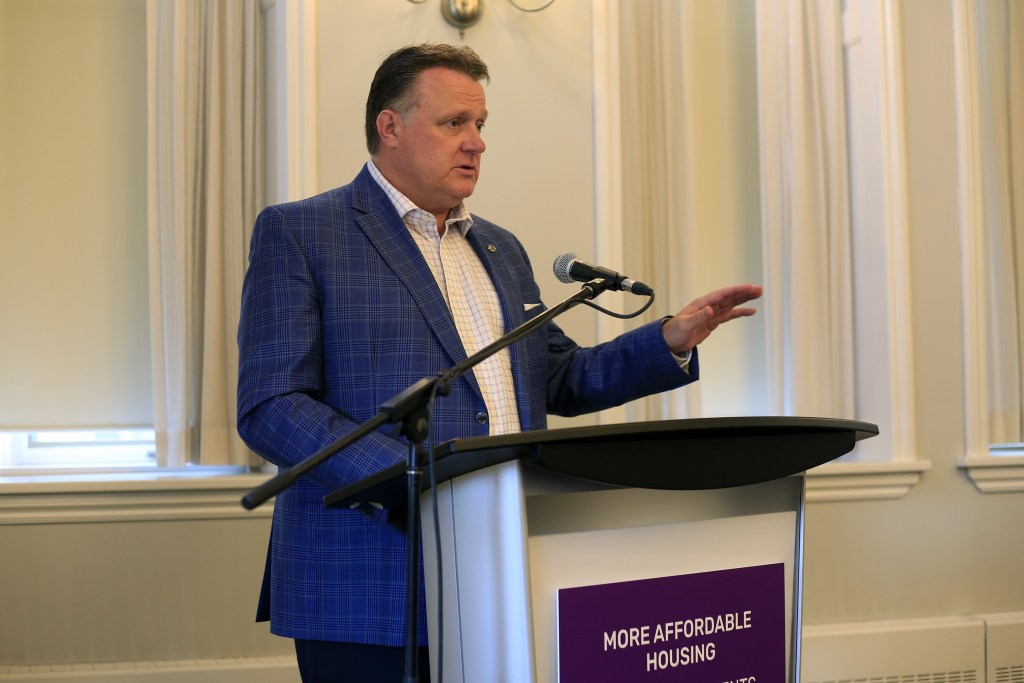 The Examiner pointed out the municipality did give the shelter residents an ultimatum. The city’s statement last week said:

A deadline date of July 13, 2021 has been given to remove the shelters – failing which, the shelters, and any personal items contained within the shelters, will be removed by the municipality on or shortly after this date without further notice.

Savage said that was simply a preferred timeline.

“We said that July the 13th was our timeline by which we would like to have people moving out, but we’re not going to do what some places have done, which is go in and forcibly remove people right away,” Savage said. “It’s been nobody’s interest to take an approach to this that makes the situation worse.”

Asked whether people living in the shelters need to worry about coming home to find a city padlock on their door, Savage remained noncommittal.

“I’ll tell you what we’ve stated as our as our policy on this was that we would not have people kicked out of the shelters until they had some better options to go to and we’re going to talk to them about those options,” Savage said.

“It’s not our intent to kick people out and take out the shelters, and we’re hoping that we can find a solution, talking to people, treating them as human beings, with dignity that they deserve, and find a solution.”

There are currently more than 350 people homeless in HRM, according to the latest count from the Affordable Housing Association of Nova Scotia, and Savage noted the Rapid Housing Initiative builds will house more than 100 people.

“The issue of the shelters highlights the importance of what we’re doing today,” Savage said.

“We know from the last time that there’s a number of people that didn’t get funded, who will be interested in getting funded, and there’s some amazingly good options, and some of them would be places where folks who were living in temporary shelters might like this.”

Savage said municipal planner Jill MacLellan will be looking at whether the previous applicants will have to reapply, but he said the city will also give other organizations a chance to submit proposals.

There were eight more projects submitted for funding late last year, including a proposal from Akoma for four modular units as part of its development plans in Westphal; Homes for Heroes’ proposal for tiny homes for veterans; the Affordable Housing Association of Nova Scotia’s proposal for north Dartmouth; Lake City Works’ proposal for “23 tiny homes as backyard suites throughout HRM;” and Welcome Housing’s proposal for a 28-unit building for men experiencing homelessness.

If Halifax can get as much out of the funding as it did last time, the $13 million could create more than 70 units.

The municipality will likely have to guarantee the nonprofits’ operating losses again. During the first round, the provincial government eventually contributed a small sum toward the expected operating losses on the units, but it’s ultimately on HRM if they need help. The province wasn’t part of Wednesday’s announcement.

“I’m not going to have these projects fail,” Savage said.