You are here: Home / City Hall / Fast, frequent, and walkable 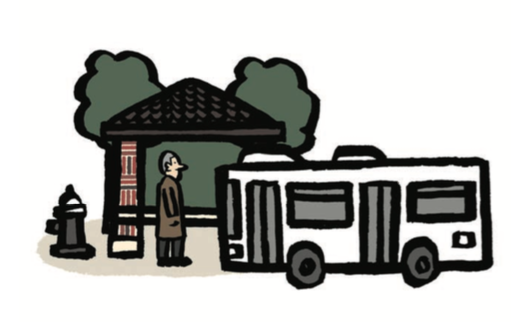 Who’s On Board 2016: What Today’s Riders Teach Us About Transit That Works, published by Transit Center

A study by transportation think-tank Transit Center has taken a closer look at who’s using public transit in the US, in hopes of taking away lessons on how to get more people on board. The report, Who’s On Board 2016: What Today’s Riders Teach Us About Transit That Works, found that in addition to speed and frequency of transit service, our ability to walk (or roll) to transit stops is a major factor in how much we ride.

Lead report author Steve Higashide and his team surveyed 3,000 transit riders across the US, and conducted focus groups with riders in three cities.

Not surprisingly, the report found that travel time and frequency were the “two most important factors driving satisfaction with transit.” Not only was ridership greater in areas with speedy, frequent service, but when asked, people placed a high value on them.

This is not news to us in Halifax, where transit advocates It’s More Than Buses have been vociferously promoting “fast, frequent transit” for the past five years, and where we recently approved a new transit plan aimed at increasing our high ridership services.

But Higashide’s report adds a third key factor to increased ridership, one that is not talked about nearly often enough in terms of transit: walkability.

Higashide’s report finds a clear connection between the ability to walk to a transit stop and how often people use transit. The most frequent transit users walk to their stops 80 per cent of the time.

Though transit planners have long ached over the “first mile, last mile” problem, these findings seem to indicate the answer: eliminate the first and last mile by putting transit within walking distance of where people live and work.

The typical terminology of “captive” and “choice” riders is working against us, says Higashide:

Longstanding dogma has been that people without cars are “captive” to transit and will use it regardless of service quality, while car owners have “choice” and must be won over through better service and luxe amenities.

This binary way of categorizing transit riders has some unfortunate consequences. There is an implication that transit should focus on competing to win over people with cars, because everyone else will ride transit regardless of service quality.

Not only does the captive/choice way of thinking further disadvantage communities that are typically already disadvantaged, but according to Higashide, it’s not even accurate. “On that contrary, we find that the “captivity” of transit riders is severely overstated,” he says in the report.

Instead, Higashide defines three groups of riders according to how often they use transit: occasional riders, commuters, and all-purpose riders.

Occasional riders take transit once in a while (at least one day a month, but no more than once a week.) There’s a lot of them, but they don’t take very many trips. Commuters take transit to work at least two days a week, but rarely if ever take transit for other purposes. And finally, all-purpose transit riders catch a bus or train at least twice a week for a variety of purposes, from work to shopping to recreation.

Out of the three categories, all-purpose riders are estimated as taking the most trips. 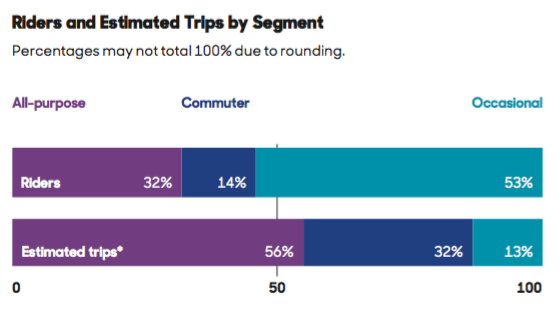 Estimated trips by segment, from Who’s On Board 2016, Transit Center

All-purpose riders also tend to spread out their transit use throughout the day and week, making it more efficient to serve them. Commuters, on the other hand, tend to be the most costly to serve, as their demand is concentrated in such strict time periods, increasing the number of buses and drivers required in the system.

All-purpose riders are also the group with the strongest connection to walkability, with 80 per cent of them walking to their transit stops, with 57 per cent and 53 per cent for occasional riders and commuters respectively. Looked at another way, we have developed the most all-purpose riders in communities with walkable access to transit.  And the more frequently people tend to use transit, the more they tend to walk to access it. 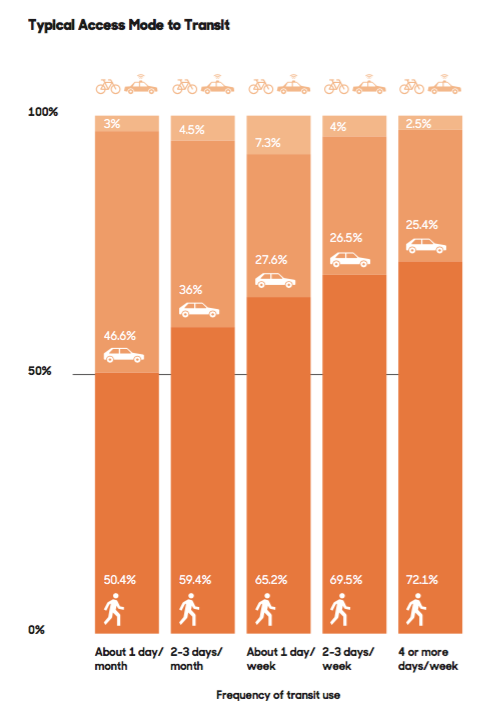 “If someone can walk to transit, he or she is more likely to be a frequent transit rider.” Who’s On Board 2016, Transit Center

Of course, this is a broad-based US study, and should be read and understood as such, but there are lessons here that we should be considering applying in Halifax. Once the currently ongoing  NovaTRAC trip diary study is completed by DalTRAC, we will have comparable Halifax-specific information on the breakdown of our all-purpose, commuter, and occasional riders.

If you haven’t filled out your survey yet, get to it!  City planners (and curious journalists) are dying to know who’s on board in Halifax.